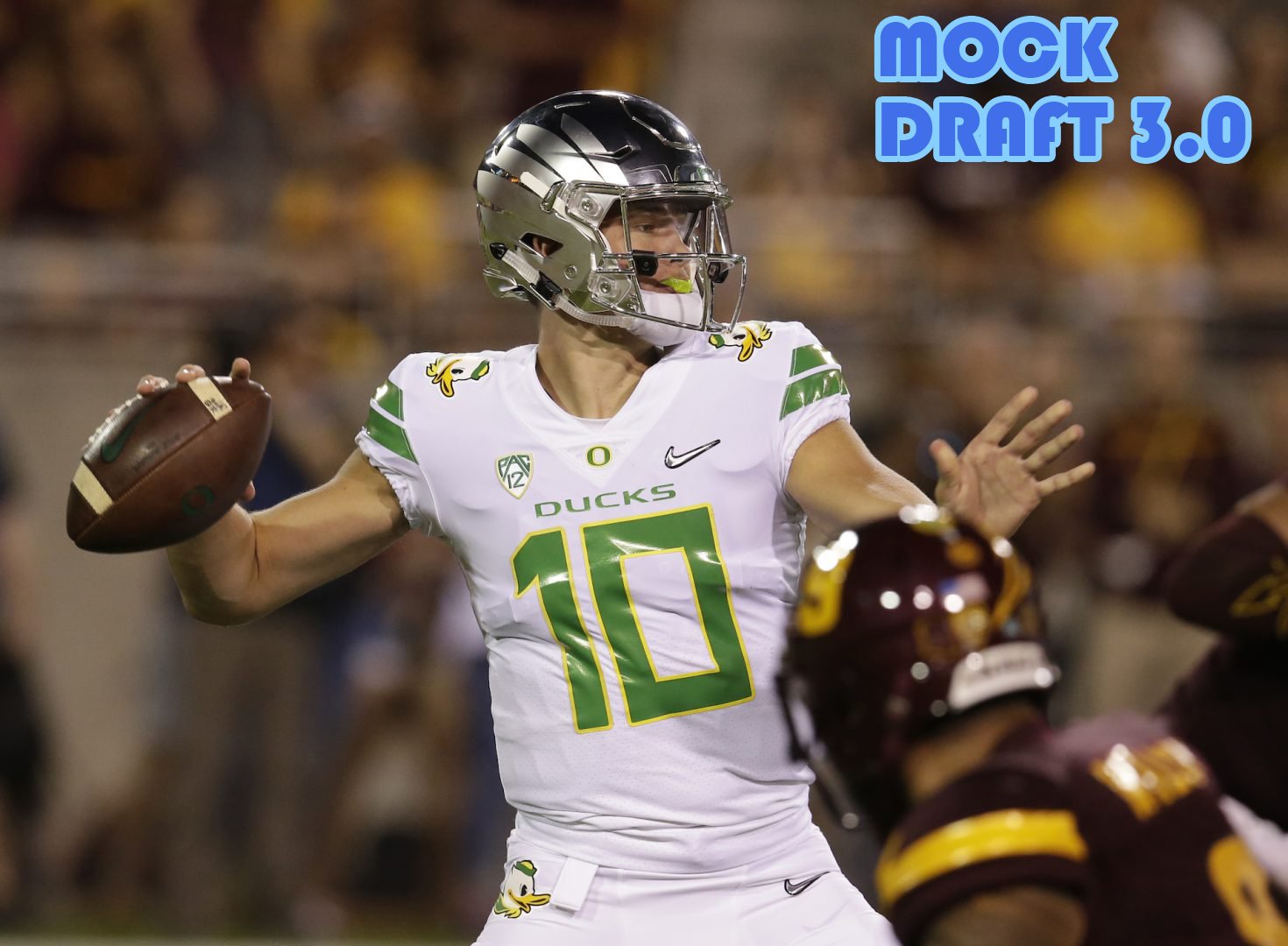 
The NFL Combine is done, and we’ve had a couple of unofficial big trades since then (they will become official at the start of the new league year), so another mock draft is in order. I’ll have at least one other mock draft before the 2020 NFL Draft in April, but this is where I currently see the first-round shaking out (with no trades). Keep in mind this is what I think will happen, not what I would personally do for each team.

It sounds like Joe Burrow is fully onboard with playing for the Bengals, and the concerns with the franchise have been media driven—they haven’t a playoff game since 1991, but the team hasn’t been absolutely terrible every year. Burrow is likely to be the first pick next month.

The Redskins probably aren’t going to let their intentions leak, but the Tua Tagovailoa talk might be a smokescreen to get another team to make a godfather offer and move up. Chase Young would give a boost to a defense that could be pretty good under Ron Rivera in 2020.

The Lions are not in a division with elite receiving threats at tight end that they’ll need to slow down multiple times per year, but Matt Patricia would love to get a defensive chess piece like Isaiah Simmons on his squad.

Giants general manager Dave Gettleman has never traded back, but he’s likely a candidate to do so this year, especially if there’s a situation where a team wants to leap Miami for Tua. However, Gettleman sounds like he doesn’t want to miss out on a player by trading back, and he might opt to stay at No. 4 and select offensive tackle Andrew Thomas, who could be a mainstay as a protector for Daniel Jones over the next decade.

Perhaps everyone is wrong, but the major consensus is that the Dolphins want Tua Tagovailoa. I believe they’ll get their guy somehow, which might mean trading up to No. 2 or No. 3.

The thought has been that the Chargers will take advantage of a high draft pick and select a quarterback, and I was leaning toward Jordan Love or Justin Herbert. But after they traded away left tackle Russell Okung, they might be targeting one of these tackles. Mekhi Becton helped himself at the Combine.

There might not be a more interesting team than the Panthers in Matt Rhule’s first year leading the franchise. Quarterback could be a wild card if Rhule likes one of the guys available, but it might come down to Jeffrey Okudah or Derrick Brown if the draft falls like this. Okudah would help replace James Bradberry if Bradberry leaves in free agency.

The Cardinals have not been shy about wanting to add a receiver, and CeeDee Lamb is an outstanding fit to rejoin one of his three star college quarterbacks in Kyler Murray.

Following their trade of cornerback A.J. Bouye, the Jaguars are an option to trade up for Jeffrey Okudah next month. Jacksonville has the ammunition to move up for a prospect they love, whether it’s Okudah or someone else; but this would be a great scenario if they can wait at No. 9 and grab Auburn stud defensive lineman Derrick Brown.

Someone like Isaiah Simmons or Derrick Brown could drop to make this more difficult, but the Browns would probably be happy taking one of the top three or four offensive tackles in this year’s draft at No. 10. Tristan Wirfs can play the left or right side, but he’d likely slide right in on Baker Mayfield’s blindside.

The Jets are one of the toughest teams to project this year, but protecting quarterback Sam Darnold obviously must be a priority. New York could pair Jedrick Wills with last year’s third-rounder Chuma Edoga at the tackle spots.

I believe the Raiders would prefer CeeDee Lamb, but with the OU product off the board, it would be a classic Raiders pick to grab the ultra-fast Henry Ruggs III. Jon Gruden would be on board after watching Tyreek Hill torch the AFC West the last few years—he wants weapons like that on offense.

Georgia quarterback Jake Fromm should not be a surprise here or with the next pick, but the Colts might first want to grab more talent at receiver for potential starting quarterback Jacoby Brissett or Philip Rivers. Jerry Jeudy would be a nice fit next to T.Y. Hilton, and he would give Indy excellent depth at the position.

Justin Herbert might ultimately go in the top five, but it was hard to find a spot for him if the Chargers are going to take a tackle and the Panthers wait on quarterback. Bruce Arians might like Herbert’s natural ability at six-foot-six.

Javon Kinlaw did not participate in the Combine, so he’s slightly under the radar at the moment. The South Carolina defensive lineman would be an exceptional fit in Vic Fangio’s defense.

The talk is that the Falcons want to go with an edge player in the first-round, and K’Lavon Chaisson has drawn interest from the team. Chaisson’s versatility is a plus in Dan Quinn’s unit.

The Cowboys are expected to lose top cornerback Byron Jones in free agency, and they might have their pick of the non-Okudah cornerbacks at No. 17. Trevon Diggs is an experienced player that could immediately step in as a strong starter on the outside.

Xavier McKinney emerged as a leader for the Crimson Tide in his final college season, and the Dolphins are looking to add high quality individuals to their rebuild. McKinney would join a promising secondary with Xavien Howard and Eric Rowe.

The quarterback situation for Las Vegas is intriguing. I know they have said otherwise and instead want to add pieces around Derek Carr to help the position improve, but I believe Jon Gruden wants to move on now (which I did not believe last year, when they backed up the talk by committing to Carr). Marcus Mariota and Tom Brady are the two most likely options in my opinion, but they might want a rookie in the mix, too. Jake Fromm is going to impress teams through the draft process.

C.J. Henderson arguably has a lower floor than some senior defensive backs on the board, but the Jags have often gone with players from Florida colleges in the past.

The Eagles have not put a lot into the linebacker position in the past few years, but adding Kenneth Murray at No. 21 would be a serious value. Philadelphia might ultimately wait on a receiver for Round 2.

Tee Higgins to Buffalo feels like an easy fit, as the Clemson product has a huge wingspan to help Bills quarterback Josh Allen. Higgins would fit well as a complementary piece to smaller targets John Brown and Cole Beasley.

Free agency might not impact a mock draft selection more than the Patriots’. For now, Cole Kmet fills New England’s need at tight end, which ultimately might be filled during free agency or via trade before the draft.

The Saints saw Justin Jefferson help LSU light it up offensively in their backyard in 2019, and Sean Payton would obviously love to add him to his offense. The Combine helped Jefferson get squarely into the Round 1 conversation.

Minnesota has one of the NFL’s best rosters in terms of talent, and A.J. Epenesa would be another solid player on Mike Zimmer’s defensive line. Cornerback (as usual) and a third receiver to join Stefon Diggs and Adam Thielen is also a possibility here.

I’m thinking the media (basically except for us) is way lower on Jonathan Taylor than the NFL, so I won’t be surprised if he goes in the top half of the first round. I’ll say he’s the first running back off the board at No. 26 to the Dolphins. A quarterback (Tua) and a running back (Taylor) to lead the offense and a potential defensive leader at safety (McKinney) to boost the defense would be quite the first-round haul for Miami.

Yetur Gross-Matos feels like a Seattle pick to me, and he’d help replace Jadeveon Clowney, who is set to become an unrestricted free agent later this month. Gross-Matos might end up going way higher than this in April.

They aren’t going to reach, but the Ravens will probably go with someone on defense in the first round, and likely a player from the front seven. Patrick Queen has the athleticism to make an instant impact for a Super Bowl contender.

Kristian Fulton is a very good fit for the Titans, as he’s a seasoned, all-around cornerback that can help the Tennessee defense match up with top offenses.

It’s probably safe to say the Packers are going to target receivers this offseason. Denzel Mims fits a similar mold to receivers Green Bay has drafted in the past, but he’s basically a supped-up version of some recent mid-rounders as a potential first-round pick.

The 49ers have a deep group of skill position players, but they could use an electric target like K.J. Hamler as a consistent threat to take the top off the defense. Kyle Shanahan would also have fun getting the ball into Hamler’s hands on screens and sweeps.

Georgia’s D’Andre Swift is also on the board here, but the Chiefs might want the best receiving back in the draft as another weapon in Andy Reid’s offense. Damien Williams can continue leading the Kansas City backfield, with Clyde-Edwards-Helaire mixing in.