WOLF SPORTS ALERT There may be temporary login issues due to site maintenance. Thank you for your patience!
Home / frontnfl / 2020 NFL Mock Draft 4.0 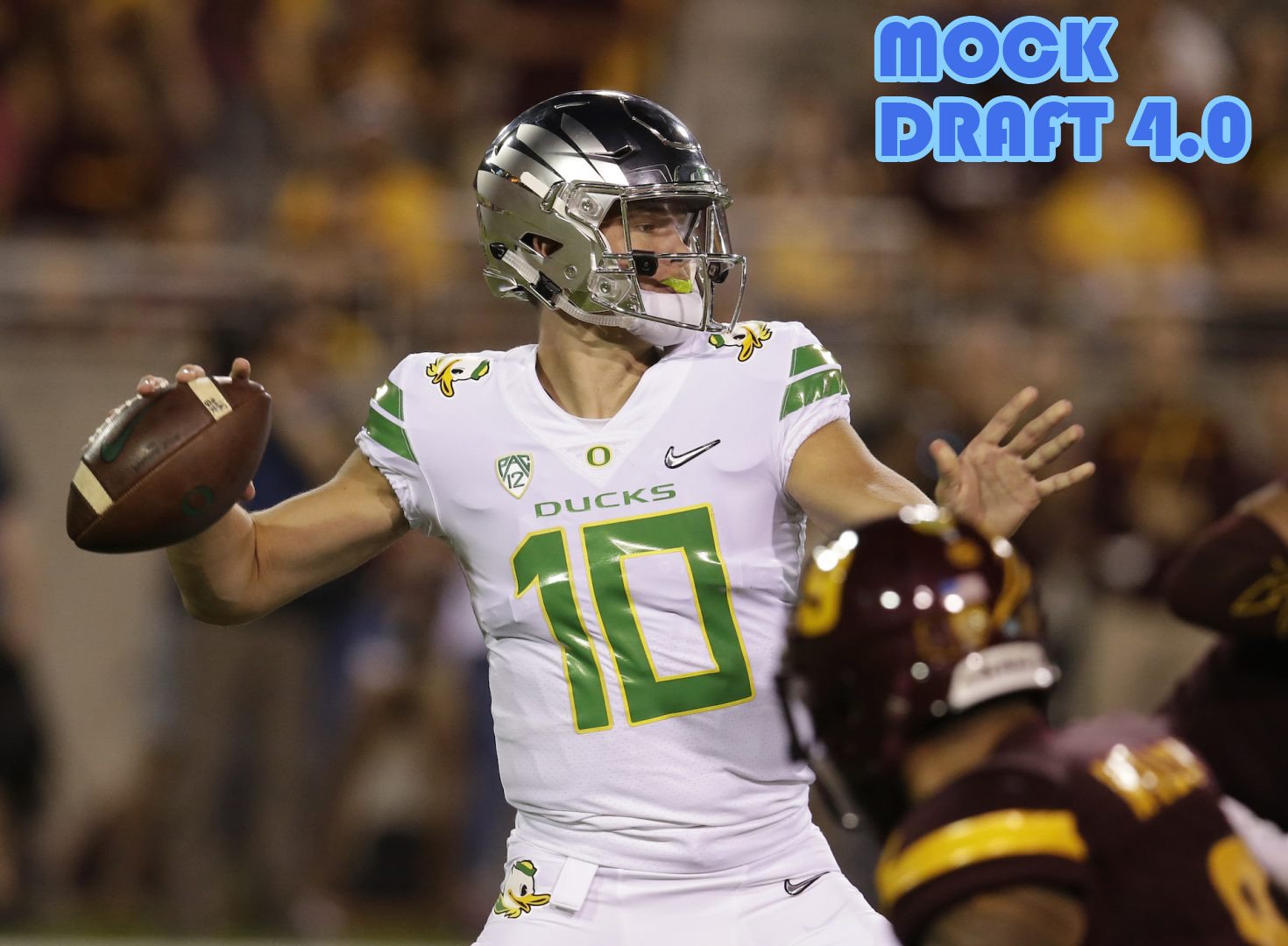 
Free agency has changed things quite a bit since the last mock draft—with the biggest change obviously being Tom Brady signing with Tampa Bay—so we are getting a clearer look of the landscape for April’s draft. This is how I could see the first round playing out as things currently stand.

The Bengals clearly don’t want to waste any time turning the team around based on how they attacked free agency, and the offense is ready to take off with a new quarterback at the helm. Burrow’s biggest challenge will be keeping his confidence high through some struggles in a tough AFC North (facing Pittsburgh and Baltimore for 25% of his games won’t be easy).

Like Burrow may be the missing link for Cincinnati’s offense, Young may be the perfect piece to lift up the young defensive players already in place for the Redskins. There should be little mystery about the top two picks next month.

I expect there to be a bidding war between the Dolphins and Chargers to move up for Tagovailoa, but Miami has more to offer and can’t afford to lose their target. When healthy, Tua is a mobile passer with pinpoint accuracy.

The history of Dave Gettleman (never trading back) combined with the Chargers possibly looking around and seeing themselves as the only bidder to move up for Justin Herbert could mean this pick stays with New York. If so, they can push the offensive tackle need to Day 2 and take Simmons as the ultimate chess piece for Joe Judge.

Detroit getting Okudah seems to be a lock, but I wouldn’t be shocked if they feel good about Desmond Trufant, Amani Oruwariye, and Justin Coleman as their starting corners in 2020. That said, most view the Ohio State product as a potential superstar.

Los Angeles is expected to choose between quarterback and left tackle here, but not having interest in Cam Newton or another free agent signal-caller suggests they have a draft target in mind. Herbert could use some time to develop behind Tyrod Taylor before taking over.

The Broncos addressed two big defensive needs by trading for A.J. Bouye and Jurrell Casey, so now they can round out the offense by jumping the Raiders (and potentially others) to get Ruggs III. You’d have to like Drew Lock’s chances of establishing himself as a franchise quarterback if he’s surrounded by Melvin Gordon, Phillip Lindsay, Courtland Sutton, Ruggs III, and Noah Fant.

I guess anything can happen, but the trade for DeAndre Hopkins probably takes CeeDee Lamb off the table here, and Wirfs is the perfect option to slide in as an athletic right tackle in Kliff Kingsbury’s offense. Things could get interesting if Isaiah Simmons is still available.

Seeing the Jaguars jettison talent entering a make-or-break year for the current regime has been a bit odd, but if they are going to establish a winner, I believe it will start with the culture. Adding Brown as the interior bully to pair with edge finisher Josh Allen is a great start.

The Browns getting a left tackle is a safe bet, and Thomas and probably fits the zone scheme of Kevin Stefanski better than Mekhi Becton would. I doubt protection would be an issue for Baker Mayfield with Thomas and Jack Conklin as bookends on the offensive line.

Whether right or wrong, Joe Douglas doesn’t seem like he will draft a wideout here unless four offensive tackles go in the top ten. Becton would provide a human wall for Sam Darnold and make things much easier on Le’Veon Bell.

Quarterback is unlikely to be an option at No. 12 and No. 19 after the Raiders signed Marcus Mariota, but whoever is under center could use a dominant receiver to throw to. My comparison for Lamb is Davante Adams, and Las Vegas would be loaded at the position with the rookie joining Tyrell Williams, Nelson Agholor, and Hunter Renfrow.

In my opinion, the target for San Francisco will either be Kinlaw or Jerry Jeudy, but drafting prospects that play in the trenches got them to a Super Bowl last season, so John Lynch sticks with the formula. The replacement for Emmanuel Sanders can be found later, but Kinlaw might be the only rookie that can come close to the short- and long-term impact of DeForest Buckner.

I would love for the Buccaneers to take Jonathan Taylor here, but right tackle remains the biggest hole on offense, and Tampa Bay will make protecting Tom Brady a priority if they don’t sign Jason Peters or someone else. Wills has the tools to be an excellent pass blocker.

Matt Rhule has had a preference for players he coached in college (when he was at Temple), but what about upcoming prospects he faced at Baylor? Murray was tremendous in both matchups versus Rhule last year, and he could be the target in a trade back for Carolina.

C.J. Henderson has been pegged as the “next guy” after Jeffery Okudah, but I think it’s actually wide open and will vary from team to team. Terrell would immediately start at left cornerback and seems to be a great fit across from 2018 second-rounder Isaiah Oliver in Dan Quinn’s system.

Dallas could go in a few different directions (cornerback, safety, wide receiver), but an emphasis has been placed on building up the defensive line in free agency, and Chaisson is a cheap replacement for Robert Quinn. I like the fit for Chaisson better in a 3-4, but new defensive coordinator Mike Nolan can be creative to put the rookie in good positions to have success.

Jeudy falling this far would be classified as a surprise on draft night, but players always slip unexpectedly, and one of the receivers might because of the depth at the position. In Miami, Jeudy would be reunited with Tua as a great on-the-ground compliment to DeVante Parker.

It seems like the Patriots are truly confident in Jarrett Stidham, but Bill Belichick won’t sit back and hope he develops if he sees a way to improve the quarterback room—and I think Fromm could be their guy. The intelligence, accuracy, and leadership makes Fromm a natural successor to TB12.

The Jaguars need a new No. 1 cornerback capable of challenging some of the top receivers in the AFC, and Henderson has the speed and natural cover ability to take on the role. I could also see Jacksonville making a small move up the board for a “falling” receiver.

Perhaps being higher on J.J. Arcega-Whiteside gives me a slightly different outlook, but I don’t think the supporting cast for Carson Wentz is as dire as Twitter would have you believe. Still, Philly will draft a receiver at some point, and Jefferson may be viewed as an ideal fit to play the slot between DeSean Jackson and JJAW.

It feels like Minnesota will want to use the pick acquired in their trade of Stefon Diggs to select his replacement, and Mims is arguably the top wideout on the board. Cornerback and offensive tackle are also two big positions of need that could be addressed.

Las Vegas plugged a lot of their holes in free agency, so they can go in a variety of directions with their second pick (including the trade back mocked here). Mike Mayock has shown he wants college production from his draft picks, which gives Fulton the edge over teammate Patrick Queen, who became an impact player late in his LSU career.

Speaking of Queen, the speedy linebacker would be a great piece to add alongside Demario Davis, and he wouldn’t have the pressure of being a full-time player right away with Alex Anzalone, Kiko Alonso, and others on the roster as very capable options. Queen and Davis would be perhaps the best cover tandem in the league.

I’ve previously mentioned the Vikings as a landing spot for Jones in the first round because of his fit in their zone-blocking scheme, and Minnesota would have the future bookends in place with him on the left side and Brian O’Neill locked in at right tackle.

The Lions signed Jamie Collins to bring some added versatility on defense, and Baun would be another great piece for rocket scientist Matt Patricia to experiment with. Detroit could be an NFC North surprise if they hit on their draft picks after (likely) trading down.

As always, Seattle needs to be looked at as a trade down candidate, but if the Jadeveon Clowney situation isn’t resolved by him re-signing with the team before April 23, they may stay put for what looks like a shallow edge class. Gross-Matos and last year’s first-round pick L.J. Collier are both really good run defenders with upside getting after the passer.

The Pro Day numbers weren’t great for Higgins, but the tape is much more important, and he should be the perfect complement to Marquise Brown in Baltimore’s receiving corps. Lamar Jackson’s biggest area of improvement is throwing outside the numbers, so Higgins—a jump-ball specialist—might give him more confidence.

Tennessee needs another interior defender after trading Jurrell Casey to Denver, and Davidson—despite playing the edge at Auburn—has bulked up for the next level. Mike Vrabel is sure to love the football character of the relentless 21-year-old.

In basketball terms, the Packers basically have a bunch of forwards making up their receiving corps right now, and Reagor would bring the speed/quickness to the position as a talented “Robin” for Davante Adams. In an ordinary class, I think Reagor would be a potential top-15 pick.

The Niners could use more draft picks with the next one not coming until the fifth round, so we might see another deal made with Indy if Chris Ballard believes Love is their potential quarterback of the future. Philip Rivers and Jacoby Brissett are slated to hit free agency in 2021.

Cornerback will need to be remade a bit for the defending Super Bowl champions, and Diggs has the size, athleticism, and ball skills to be a star. He would likely be an immediate starter at left cornerback with Charvarius Ward on the right side.