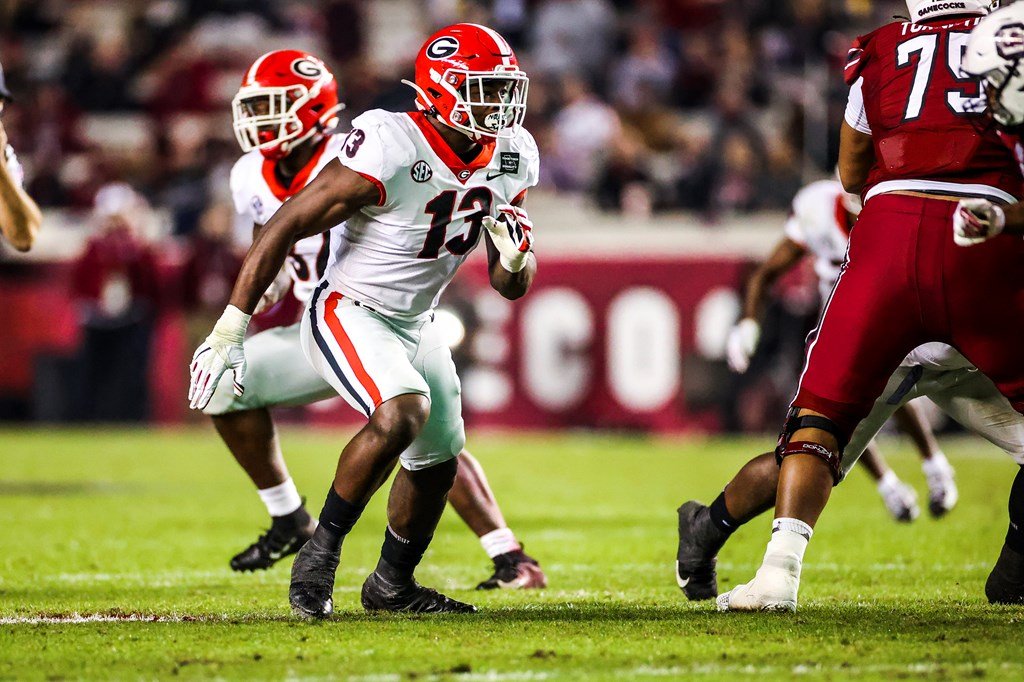 
This three-round, draft-week mock includes no trades, and is basically an exercise to lengthen the board and see some of the potential hauls for teams in the 2021 NFL Draft. Feel free to leave your thoughts in the comments about the selections for your favorite squad.

This should have been written in permanent marker from the moment Jacksonville locked up the No. 1 overall pick.

All the signs have pointed to Wilson being the pick here, and the intrigue should start when San Francisco is on the clock.

Jones is back to being a somewhat heavy favorite to be the No. 3 pick, and Kyle Shanahan will hope he’s an extension of himself as a deadly accurate distributor.

Even if I were doing trades in this mock, Pitts would still be the pick as a dominant weapon to continue wreaking havoc with Julio Jones and beyond (in the post-Julio era).

Oregon offensive tackle remains the betting favorite, but the local media seems to think Chase will be the pick as he reunites with college quarterback Joe Burrow.

Miami obviously moved back up from No. 12 to No. 6 (after trading out of No. 3) for someone in particular, and my guess would be Smith or teammate Jaylen Waddle.

Detroit is the team most likely to trade back in Round 1, but might they want to stay put if Sewell is on the board?

Panthers owner David Tepper is desperate for a franchise quarterback, and the acquisition of Sam Darnold shouldn’t stand in the way of that if they have a high enough grade on Lance or Justin Fields.

Fields is the quarterback most likely to slip on Thursday night, but Denver could be the ones to stop his fall—especially if they don’t need to spend any extra draft capital to acquire him.

Surtain II to Dallas has been one of the most obvious matches in the class; will someone move up to disrupt the potential selection?

New York is on the other end of the spectrum in terms of clearness about their pick, but it’d be difficult to see Daniel Jones struggling with Kenny Golladay on the outside and Waddle joining Saquon Barkley and Evan Engram as a run-after-catch playmaker.

Brandon Graham was the No. 13 overall pick in the 2010 NFL Draft, and general manager Howie Roseman could easily decide to go back to the Michigan well with another defensive end in the same range.

Los Angeles has a few needs they need to plug this week/weekend, but protecting Justin Herbert needs to be the priority; this feels like a better range for Slater than the top-five buzz he generated from media members.

Darrisaw might not exactly fit the rare athletic profile of prospects Minnesota has targeted up front in recent years, but it might be wise to stop the shuffling and get a stud left tackle.

The team not signing J.C. Jackson to a long-term deal signals to me that they want to be cheaper at cornerback; Horn has the skillset and confidence to be a shutdown option.

Similar to Rashawn Slater, Vera-Tucker is a prospect that might have their draft stock boosted more so by analysts because he’s considered a “high-floor” player, but there’s nothing wrong with Arizona going in that direction considering all the big swings they have made.

Las Vegas has shuffled the deck for their roster quite a bit, and Parsons could be an “alpha” in the middle to help lift up some of the young defenders that have disappointed to start their careers.

It would be good for the league to have Tua Tagovailoa become a star, so sign me up for adding reinforcements in the form of college teammates DeVonta Smith and Harris.

Left tackle is the biggest hole for Washington, and they could end up moving up for Christian Darrisaw (or perhaps even a quarterback) in Round 1; if not, Owusu-Koramoah would be tremendous behind a loaded defensive line.

Chicago is another team that could move up, but Farley—assuming health—would give them a potential decade-long running mate for Jaylon Johnson at cornerback.

Leatherwood started three years (two at left tackle) for the Crimson Tide, and his elite athletic testing makes him a definite candidate to be selected by general manager Chris Ballard.

Tennessee signed Josh Reynolds, but they still need help for A.J. Brown at receiver; aside from being a stylistic complement, Moore overlapped with Brown for a year at Ole Miss.

Humphrey might not bring the excitement of Landon Dickerson or Quinn Meinerz, but he’d provide a solid, all-around anchor to grow with Zach Wilson.

The buzz for a pass rusher here is picking up ahead of Thursday night, but I’m not sure that makes sense with Josh Allen and K’Lavon Chaisson already on the roster; instead, Moehrig provides versatility on the backend.

This would be a home-run selection for Cleveland, as Barmore (a flashy pass rusher from the interior) fits perfectly next to Jadeveon Clowney (a dominant run defender on the edge).

The Ravens have been connected to wideouts in this range, but Marquise Brown, Sammy Watkins, and Mark Andrews should be enough weaponry in a run-first attack—and Ojulari has an AFC North type of game.

Samuel Jr. would be a surprise as the fourth cornerback off the board, though he probably shouldn’t be as a competitive player that can stay outside or defend the slot.

Medicals would be the only thing keeping Dickerson out of the first round, but Green Bay might have some comfort in knowing Elgton Jenkins could simply slide to the pivot if and when it’s needed.

Buffalo has been searching for a bigger running mate for Tre’Davious White, and Stokes fits the billing at six-foot-one with 4.28 speed.

I said Azeez Ojulari fits in the AFC North, and I would go a step further for Grant in saying that he feels like a Baltimore-type player in particular.

Agents try to generate smoke all the time, but this would be the last chance for Rousseau to go in Round 1 as Drew Rosenhaus said he would, and Tampa Bay’s pass rush could use more depth.