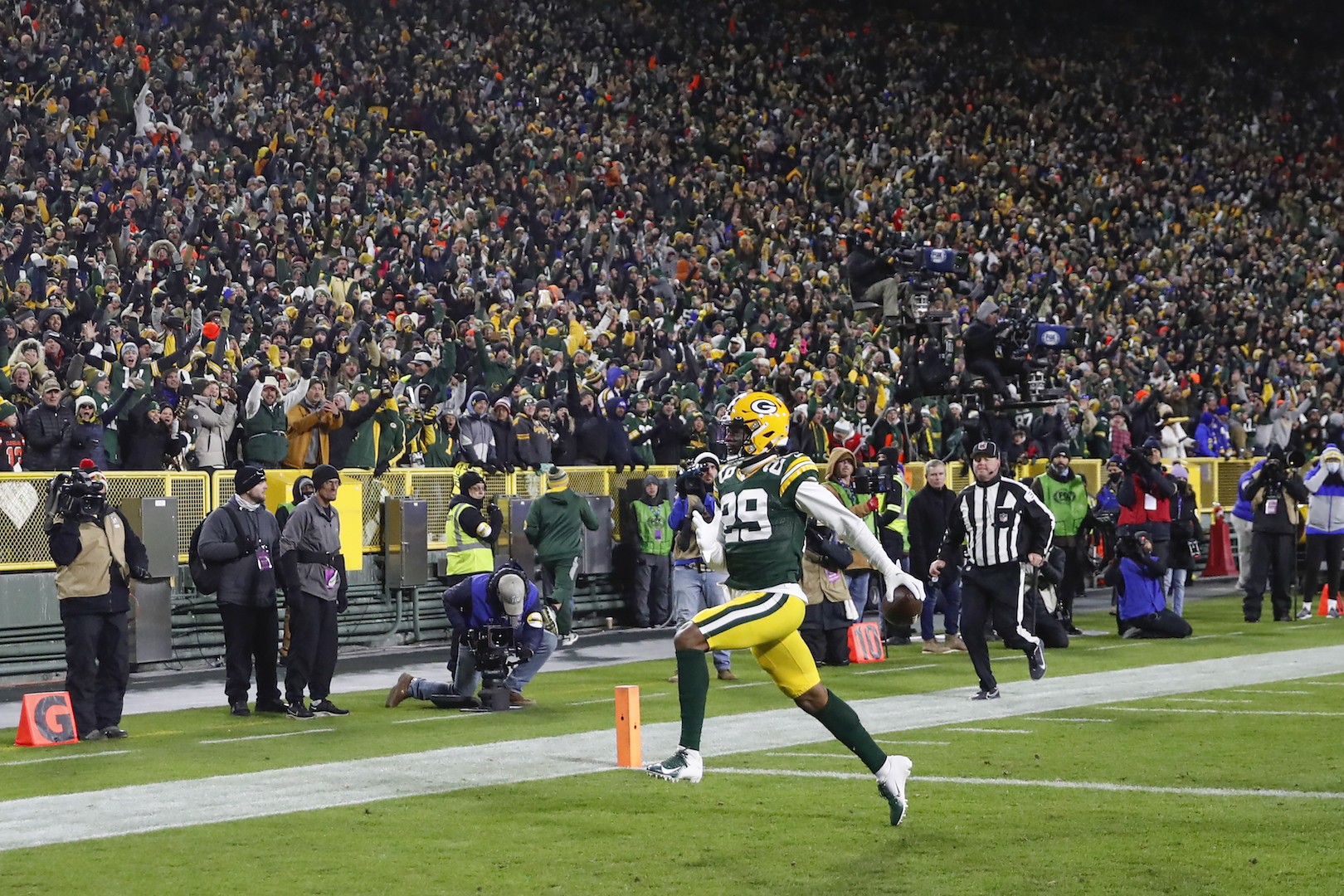 
We still have a long way to go, but this has been the craziest NFL season I can remember. 26 teams are still within one game of a playoff spot (the extra playoff spot helps), and sports bettors are coming off one of their worst months ever thanks to the unpredictability of things. With that, we’ll get to the Week 13 NFL power rankings at the start of December. I often try to keep the power rankings shorter, but I really will limit this to one or two sentences per team this week—feel free to let me know what you think of the shorter format. Also, listen to The Wolf Sports Show (Apple, Spotify, Google Podcasts) for more coverage on all 32 teams.

The Cardinals just had their bye week and remain at No. 1 in the power rankings, with Kyler Murray (ankle) and DeAndre Hopkins (hamstring) both potentially set to come back after missing the past few games.

Cornerback Rasul Douglas was a standout performer in the Packers’ win over the Rams last week, and the Green Bay offense had little trouble facing Los Angeles. The Packers will take their bye to get healthier, including Aaron Rodgers and his fractured toe.

Rob Gronkowski is looking like vintage Gronk, Leonard Fournette scored four touchdowns, and the Buccaneers defense is getting back to the level they were at during last season’s Super Bowl run. Now, Tom Brady might get back one of his favorite weapons in Antonio Brown (ankle).

I considered putting the Patriots at No. 1 in the power rankings. They’re playing defense better than anyone right now, and Mac Jones is already an extremely dangerous quarterback as a rookie.

The Bills will look to carry a strong Thanksgiving Night into the highly anticipated Monday night matchup with the Pats. But losing All-Pro cornerback Tre’Davious White for the season to a torn ACL is a very difficult break for the team and for one of the game’s best players.

When A.J. Brown (chest) went on injured reserve last week, it put the Titans in a challenging spot offensively—and it showed in the loss to New England. The Titans will now use the bye to figure things out on that side of the ball.

It was ugly (and included four interceptions from Lamar Jackson), but the Ravens were able to get a gritty win on Sunday night. Baltimore will now look to put a ton of distance between themselves and rival Pittsburgh this week.

The Chiefs were flexed into Sunday Night Football versus the Broncos this week, and Andy Reid had extra time to prepare for the divisional contest. Reid is 19-3 off the bye in his career during the regular season.

The Cowboys were down Amari Cooper (COVID-19) and CeeDee Lamb (concussion) on Thanksgiving, but their loss to the Raiders was still pretty surprising and disappointing for them. Dallas can get back on track with a win over New Orleans tomorrow night.

The blowout loss to the Browns aside, this season has gone about as well as Bengals fans could have hoped to this point. It was just one game, and we’ll see in a crowded division, but some are even calling Cincinnati’s 41-10 win over Pittsburgh a passing of the mantle of sorts.

The Colts understandably felt throwing the ball on the Buccaneers is easier than running it, but when Jonathan Taylor started ripping off runs in the fourth quarter, it showed that Indy is good enough to run on anyone. They shouldn’t forget who they are—a team that can run the ball and play strong defense—in my opinion.

No one can really predict what will happen in each game, but I felt strongly that the Rams would have some trouble at Lambeau Field. Matthew Stafford has now thrown a pick-six in three consecutive games, and I still just don’t feel good about LA.

I stated last week that I felt the Rams and the Vikings were two teams that have separated themselves for two of the wild-card spots in the NFC, but the 49ers obviously look like they deserve to be in that group. The defense has improved, and rookie running back Elijah Mitchell has helped power the offense (which will be without Deebo Samuel for at least this week due to a groin injury).

There have been a few games this year where the Chargers offense has been off, and maybe that can be chalked up to these players being in a new system. But I’d like to see more from the defense, which has struggled for most of the season.

The Vikings will be without Dalvin Cook (shoulder) for at least a couple of weeks, and cornerback Patrick Peterson might also miss time after landing on the reserve/COVID-19 list. Minnesota needs to improve the run defense and cannot overlook Detroit this weekend.

A couple of AFC West teams make big leaps in the power rankings while hanging around at 6-5. The Broncos were in total control against the Chargers last week, and they can make things even more interesting in the division if they can get a road win over the Chiefs in Week 13.

An early touchdown bomb to DeSean Jackson helped set the tone that the Raiders were not going to make it a pleasant Thanksgiving for the Cowboys. Daniel Carlson was key in the victory, going 5/5 on field goals including the game-winner in overtime.

Last week was a low point for the Steelers this season, but it’s a proud group with a chance to respond against a tough opponent this weekend. Chase Claypool thinks the Steelers should make practice more fun, but they might need the opposite to get back on track—Mike Tomlin disagrees with Claypool’s assessment.

There were obviously opportunities for the Browns to get the road win last week after forcing a handful of turnovers, but Cleveland could not run the ball (and didn’t really try enough). Kevin Stefanski and company have some things to figure out during the bye.

The Eagles were the team seen as a rising squad to challenge the Cowboys in the NFC East, but Washington has somewhat quietly won three in a row to get within the postseason mix. The Football Team has emphasized running the ball with Antonio Gibson, and both quarterback Taylor Heinicke and the defense appear to be getting more confident by the week.

Chalk it up as “just one of those games” for Jalen Hurts and the Eagles last week. With or without Jordan Howard (knee) in the lineup, Philadelphia needs to go with a run-heavy approach.

One game at a time, the Dolphins continue to climb back into the AFC playoff picture. As outlined last week, the schedule lines up nicely on paper with matchups versus the Giants and Jets coming up.

Remember, he just joined the team and never played in Joe Brady’s offense, but Cam Newton had about as bad of an outing as you can at passer versus the Dolphins (5/21 for 92 yards and two interceptions). Now, Carolina will again have to deal with not having Christian McCaffrey (ankle) for the rest of the season, as a difficult two years unfortunately continues for the star runner.

It was again a slow start for the Saints offense last week. And while Trevor Siemian didn’t play poorly, I like the move to go with Taysom Hill to potentially give the entire team a jolt.

Despite how bad they’ve looked at times, the Falcons continue to compete and win games against opponents they aren’t too outmatched by on paper. It helped to get offensive weapon Cordarrelle Patterson back last week in the win over the Jaguars.

The Seattle defense continues to do their part since the early-season struggles, but the offense simply feels broken. The Seahawks do have some beef over a very questionable phantom defensive holding call late in the half that led to Washington scoring a touchdown.

The Giants defense stepped up to force four turnovers of the Eagles to stay within one game of a wide-open NFC playoff race. However, quarterback Daniel Jones is set to miss time with a neck injury.

The fact that people and news organizations put out fake news for the sake of clicks and profit is totally absurd. The Bears were supposedly set to fire Matt Nagy last week, which was a total lie. Anyway, Chicago was able to get the narrow Thanksgiving win over Detroit with Andy Dalton under center.

Zach Wilson didn’t have an outstanding game in his return to the lineup, but he’ll take the win. This week against the Eagles defense might be a challenge, but at least the game is at home for the Jets.

The Texans were unable to get a second consecutive win, but they’ll now look to continue playing spoiler in the division when they battle the Colts this week.

The Jaguars were forced to catch up to the Falcons after falling behind last Sunday, but I’d like to see them run the ball more often. After an upset win over the Bills a few weeks ago, we’ll see if the Jags can have a similar performance this week versus the Rams.

The loss to the Bears was unfortunately a bit of a debacle late. You saw what Jared Goff can do throwing the ball when he got protection early in the game, but this is a very conservative offense right now hoping to play in close games.