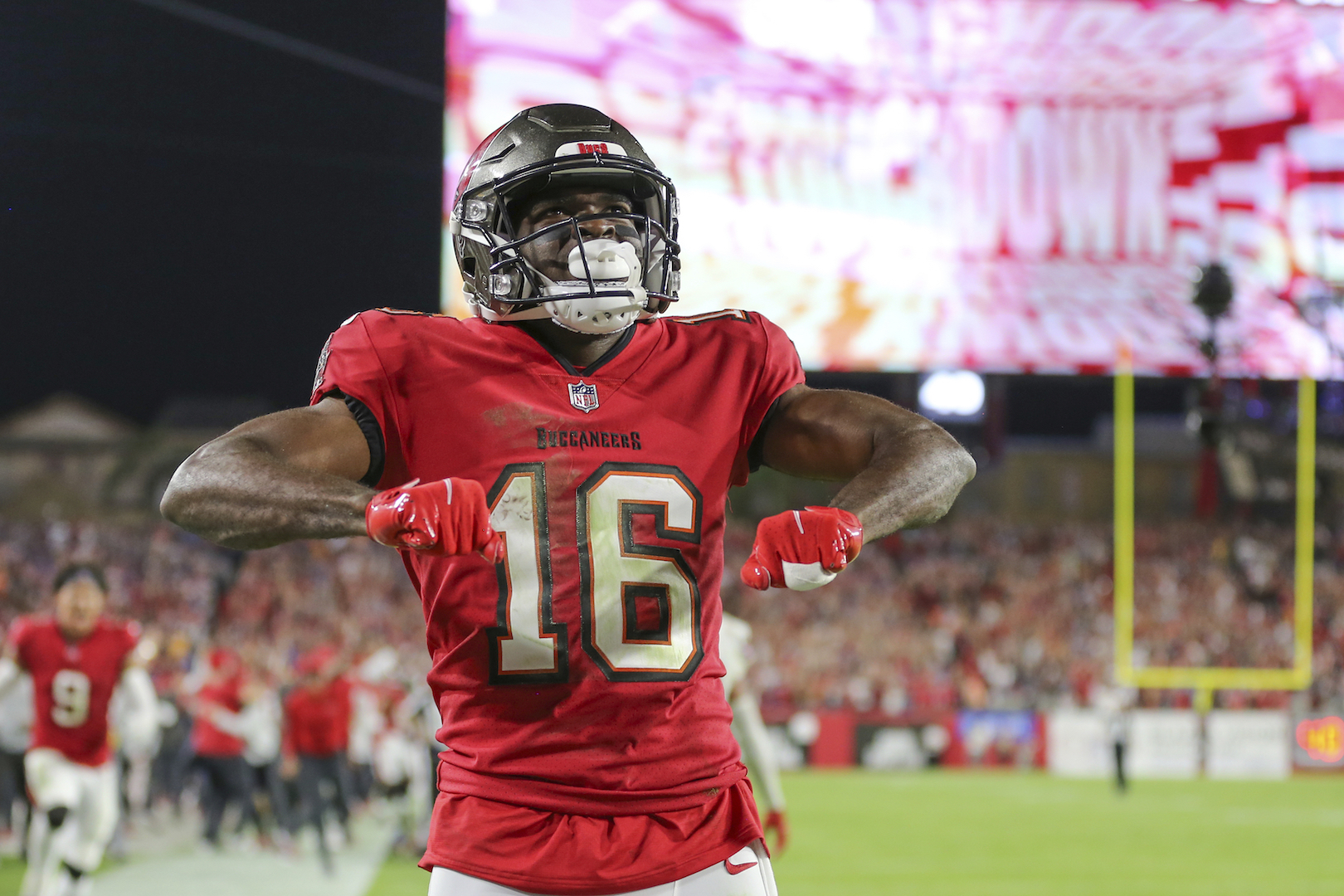 
There isn’t a ton of shuffling in the top ten of the Week 15 NFL power rankings, as—again as stated last week—I feel like we are finally figuring out where teams stand in what’s been a crazy parity-filled season. That doesn’t mean teams can’t catch fire, but this is where I see each squad heading into Week 15. We will again stick with the shorter power rankings, but you can hear more on all 32 teams on The Wolf Sports Show (Apple, Spotify, Google Podcasts).

It was fully expected that the Bucs would work their way back to the top of the power rankings at some point. While the Bills stormed back to force overtime last week (ultimately losing on a 58-yard catch-and-run touchdown by Breshad Perriman), the defense for the defending champions is again looking like a difference-making unit that flies around the field.

Question….when has mocking the belt ever worked out well?? Lol

The start was a slow one for the Packers, but Davante Adams (two touchdowns in the Sunday night win to extend his record Sunday Night Football scoring streak) is totally right. Historically, mocking Aaron Rodgers with the celebration has not worked out for the opposition.

The Cardinals have had an outstanding season, so a relatively poor and sloppy outing for them is not something to get too concerned about—it was bound to happen at some point in such a competitive league. However, it is somewhat concerning that all three of Arizona’s losses this year have come at home.

After an extremely physical win on Monday night in Week 13, the Patriots had a well-deserved bye week to recharge for the stretch run. Thanks to old friend Tom Brady and his new team, New England is now two games up in the AFC East with four games remaining.

A shutout victory over the Jaguars was almost a perfect game for the Titans off their bye week. The defense forced a few turnovers, and Julio Jones is working his way back into things on offense. Also, the return of A.J. Brown (injured reserve) is approaching, and word is that Derrick Henry’s potential return is even looming as he attempts to come back from a fractured foot.

The Chiefs sure have liked seeing the Raiders this season, completely dominating the rivalry by a combined score of 89-23 in their two matchups. The defense has been very good, but I have been hesitant to call the offense “back”, and this Thursday against the Chargers will be a key test for both teams.

I love the way the Bills battled back from a big deficit on the road at Tampa Bay. Josh Allen almost won’t let his team get blown out, and it was very impressive that Buffalo was able to force overtime. The Bills are suddenly battling for a playoff spot in the crowded AFC, but the upside remains immense for them.

Dak Prescott might be in somewhat of a cold stretch, and the late interception returned for a touchdown that helped Washington get back in the game is not something that happens often for him. However, the sensational trio of receivers all got going in the win over Washington, and the Dallas defense led by Micah Parson and Trevon Diggs again showed their playmaking ability is something to be reckoned with.

We still have four games remaining in the regular season, but I think the win over the Cardinals on Monday night was one that Matthew Stafford and the Rams really needed to have confidence they can make a postseason run. LA can now pretty much knock division rival Seattle out of the playoff hunt this Sunday.

The Colts are on Hard Knocks, so unlike most teams on a bye, we’ll get some insight tonight on HBO about what Indy’s players and staff did during the time off. The in-season Hard Knocks has been worth a watch if you’ve been thinking about giving it a try. This Saturday night’s home matchup with the Patriots should be a great one for Week 15.

It’s almost as if over the weekend people suddenly realized that Justin Herbert has an absolute cannon of an arm, which he’s unleashed often over the past two years for the Chargers, including in the Week 14 victory over the Giants:

Los Angeles has a chance to sweep the season series and take first place in the AFC West tomorrow night against Kansas City.

I’m wondering if something else is going on with Lamar Jackson’s ankle sprain—more than is being let on. When the former league MVP was carted off, it had the look of something more serious than an ankle sprain (especially not a high-ankle sprain). Anyway, the Ravens showed fight against the Browns and looked like they were actually going to pull off the comeback. They’ll need to continue playing hard when they face the Packers this week.

Jimmy Garoppolo and Brandon Aiyuk connected for a game-winning touchdown in overtime at the Bengals last week, with Aiyuk showing off his athleticism on the catch-and-run down the sideline. Aiyuk getting back involved in the offense midseason has been key for the Niners, and George Kittle continues to play about as well as ever—which is saying a lot considering what he’s done throughout his career—since returning from injury.

I feel these writeups getting longer as I go, so I’ll try to keep it shorter. The ground game for Cincinnati has been limited these past two games, so look for them to find a way to get superstar runner Joe Mixon going over these final four games.

The Browns have been hit extremely hard by COVID-19 over the past few days, and Baker Mayfield and Kevin Stefanski are among those currently impacted. With Cleveland playing on Saturday, it appears they will be in a tough spot after just getting a critical win over the Ravens last weekend.

The first half of last Thursday night’s game was difficult to watch—Pittsburgh was run all over, and—while I never actually would stop watching an NFL game—I wanted to considering how ugly it was. However, the defense (even without T.J. Watt, who left with a groin injury) stepped up to make some stops, and Ben Roethlisberger led the offense back with a shot to win at the end. The Steelers have a tough schedule on paper coming up, but they will battle.

You could certainly make a case for the Vikings being over the Steelers in the power rankings, but they stay just below them after the narrow victory at home. Still, it was promising to see Dalvin Cook go over 200 yards, and the defense showed strong flashes in shutting down the Steelers early before the near collapse.

The bye week went well for the Dolphins with some teams in the mix with them for a wild-card spot losing while they were off. Now, the Dolphins must beat the Jets to get to 7-7 at Christmas, which was the path I outlined a few weeks ago.

As we have come to expect from a Taylor Heinicke-led Washington Football Team, a sensational comeback was nearly made versus the Cowboys. And that was with Washington losing Terry McLaurin to concussion protocol. Despite any off-field issues for the franchise, this is another team that will fight every week.

As the Eagles return from their bye week, the status of quarterback Jalen Hurts is the big thing to watch. It’s been revealed that Hurts is dealing with a high-ankle sprain, so he is in jeopardy of missing his second consecutive game. But you can bet Hurts will do whatever it takes to play against Washington.

Melvin Gordon returned to the lineup and might have been determined to show he still has plenty left in the tank after everyone (understandably) fawned over Javonte Williams in Week 13. Gordon and Williams helped the Broncos control the game against the Lions, and that’s a recipe for success for them.

Former first-round pick Rashaad Penny broke out for 137 yards and two touchdowns on just 16 carries in Seattle’s win over Houston, as Pete Carroll came through on his promise that Penny would have a sizable role. It’s been an injury-riddled career for Penny, but he can be a key to the Seahawks’ continued competitiveness for a playoff spot in the NFC.

The Saints were finally able to get back on track with a victory, handling the Jets with a rushing attack led by Alvin Kamara and Taysom Hill (193 yards, three touchdowns combined on the ground). Relatively speaking (they did lose to him last postseason), the Saints have had Tom Brady’s number a little bit these past couple of years, so Sunday night should be fun.

Mykal Walker had a pick-six in Atlanta’s win over Carolina, and the Falcons defense deserves recognition for helping the team win games and remain in the playoff picture this season. On offense, Mike Davis and Qadree Ollison are helping take pressure off Cordarrelle Patterson, and first-year head coach Arthur Smith seems to be getting comfortable with a style of play to play in close games.

Raiders defensive coordinator Gus Bradley has had a ton of success as an NFL coach, but I don’t think I’m alone in not understanding the Raiders not going with more two-safety looks against the Chiefs this season. Las Vegas has basically been the one team to let KC play like that this season, and it’s happened twice. The play of the offense hasn’t helped, and the Raiders might be nearing a point where things must be blown up.

I think two quarterbacks could potentially work in the NFL, but it’s probably tough with the way the Panthers are doing it, seemingly swapping out Cam Newton and P.J. Walker whenever one has a bad series or play. The loss to the Falcons was a big drag on their playoff chances, and now Sam Darnold might be thrown back into the quarterback mix soon.

Explosive plays by Jakeem Grant and the Bears made Sunday Night Football more entertaining than I was expecting, but Chicago is simply not close to the same level as the Packers despite winning 12 games and the division in Matt Nagy’s first season a few years ago.

Daniel Jones is considered week-to-week officially, but it sure seems like we won’t see him again in 2021. Mike Glennon has struggled to see the field from what I’ve watched of him, and the Giants are somewhat cursed by injuries on offense in recent years.

The veteran New Orleans defense is a tall task for an inexperienced rookie quarterback, and Zach Wilson was also without top receivers Corey Davis and Elijah Moore after Moore was added to injured reserve last week.

Jared Goff and the Lions were in a difficult spot last week, too, with COVID hitting their team a bit and tight end T.J. Hockenson missing the Denver matchup due to a hand injury. Next up, Detroit faces an Arizona team coming off a loss.

The Texans got off to a solid start and looked like they would make things interesting against the Seahawks, but the wheels fell off a bit as the game progressed. Rookie quarterback Davis Mills will officially start the final four games for Houston, as was expected.

Following an NFL.com report that—if it is to be believed—makes Urban Meyer look very bad, the postgame handshake with Mike Vrabel just about says it all for the Jaguars at this point.