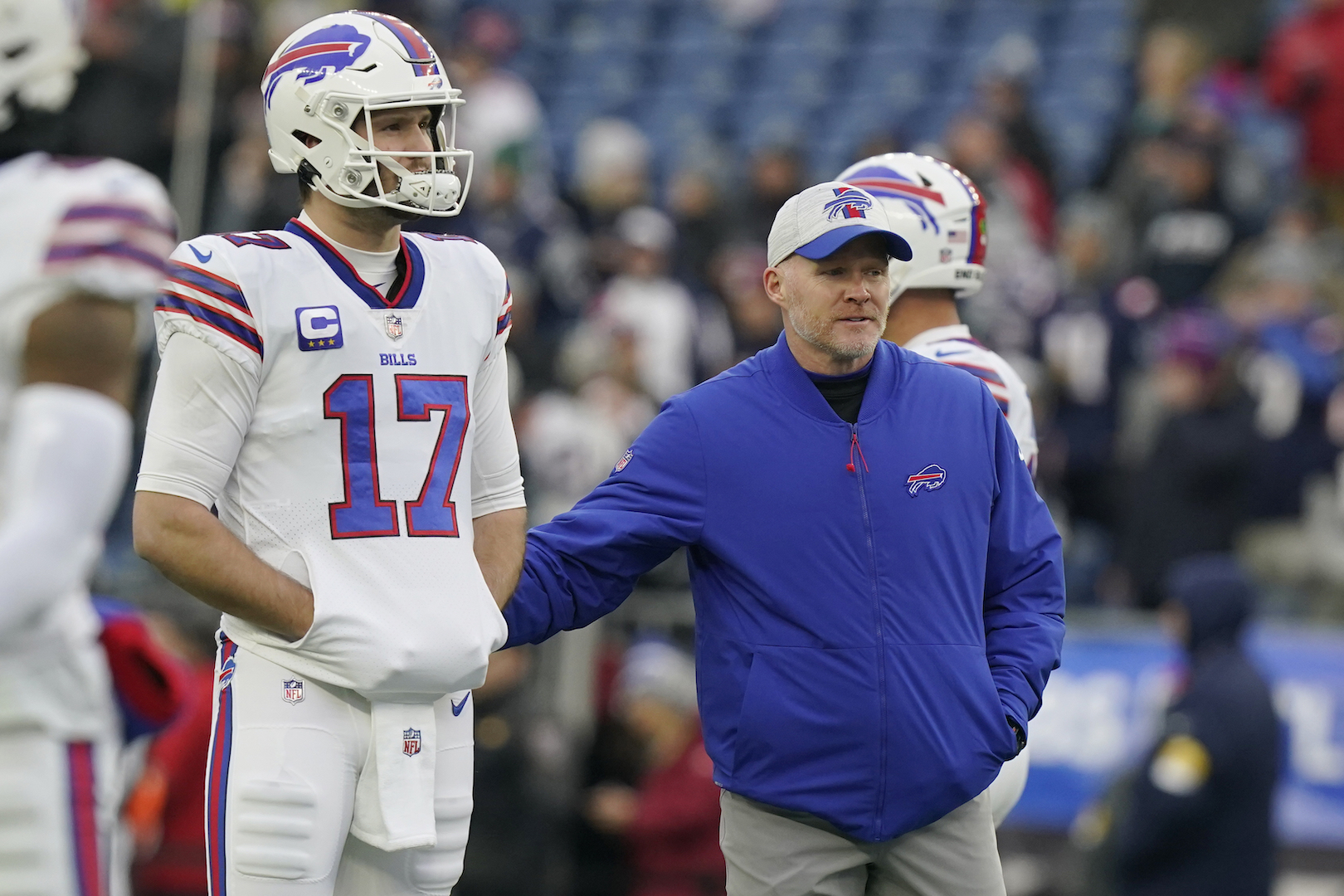 
Just two weeks remain in the 2021 NFL season, and there’s a bit of shuffling in the Week 17 power rankings. Listen to The Wolf Sports Show (Apple, Spotify, Google Podcasts) for more on all 32 teams.

Things got a little shaky at the end, but the Packers—powered by two Davante Adams touchdowns and four interceptions (including another two by Rasul Douglas)—enjoyed a Christmas Day victory over the Browns.

Both Ronald Jones and Ke’Shawn Vaughn ran well versus the Panthers, and Tom Brady picked apart the Carolina defense despite not having Chris Godwin or Mike Evans in the lineup—the return of Antonio Brown (ten receptions for 101 yards) is massive as Tampa looks to repeat.

The Chiefs completely dominated in their home win over the Steelers, as they continue to try to lock up the No. 1 seed and homefield advantage in the AFC. With the way the Kansas City defense has played over the past several weeks, winning at Arrowhead in January would be a major challenge.

Josh Allen made insane throws in Buffalo’s win at New England, Isaiah McKenzie stepped up with some tough catches in a really strong game while helping step in for Cole Beasley and Gabriel Davis (COVID-19). Unfortunately, the superstar quarterback still doesn’t get talked about as much as he should as one of the best players in the league, but Bill Belichick appeared to give Allen a stamp of approval in seeking him out after the game on Sunday:

No idea what Bill Belichick says here to Josh Allen after THAT game yesterday. Y'know…the hood.

But Josh's response: "Thank you so much. Merry Christmas to you and the family."@WGRZ #BillsMafia pic.twitter.com/XgIldWJdse

You knew the Titans were going to make it a close, gritty game against the 49ers, and they came out with a huge Thursday night win to get to 10-5. A.J. Brown totally went off in his return to the lineup, and Tennessee is a different team when he’s playing and featured like that.

Despite getting hit very hard by COVID (losing arguably two of their top three players in Quenton Nelson and Darius Leonard), the Colts beat the Cardinals on the road on Christmas Night to keep themselves in a good spot in a crowded AFC playoff race. Now, we have to keep an eye on whether quarterback Carson Wentz can get cleared from the COVID list in time for this Sunday.

The thinking in Dallas right now is, “what slump?” Dak Prescott and the offense got back on track against Washington on Sunday night, but the story remains the play of the defense, which is one of the top playmaking units I’ve ever seen.

The Colts and Jonathan Taylor had a bye week, but the NFL’s leading rusher in December is… Sony Michel. If you listen to The Wolf Sports Show, you know I’ve said for a while that Michel should a) be featured, and then b) is the key for the LA offense. Sean McVay is riding him and will continue to do so, which is wise as to not put too much on Matthew Stafford’s arm; Stafford did not play well at all in the win over the Vikings, which is something we’ve seen too often this year.

I didn’t want to drop the Patriots this much in the power rankings, and they could easily remain a bit closer to the top five, but two consecutive losses push them down (with a couple of 11-win teams rightfully rising). New England just couldn’t get off the field and contain Josh Allen. Hopefully they get a couple of pieces (Nelson Agholor and Rhamondre Stevenson) back offensively for the final two regular season games.

Like last season, the Cardinals simply are not playing well late in the season, and it’s difficult to pinpoint the reason. You can see the frustration from Kyler Murray and others, and I think maybe the team needs to relax a little bit and not press.

No mercy was shown by the Bengals, as Joe Burrow threw for 525 yards in their second rout of the season over the Ravens. One more win, and the talented Bengals squad will be AFC North champions.

The start was an extremely slow one for the Eagles, but Jalen Hurts and the offense snapped out of it in an eventual blowout win against the Giants. Miles Sanders is now out with a broken hand, but Jordan Howard and the other running backs should be able to keep the run game going behind an elite offensive line.

Jimmy Garoppolo is dealing with a thumb injury (a fracture and a torn ligament), which explains some of his struggles last Thursday night. If he can’t go, the Niners will need everyone to step up around rookie quarterback Trey Lance, who has not played much football over the past two years.

The winning streak keeps on rolling for the Dolphins, who have won seven consecutive games following a 1-7 start. Brian Flores has done an outstanding job of getting Miami turned around this year. First-round rookie receiver Jaylen Waddle is nearing 100 receptions this season, which felt like something that was relatively predictable given the way Miami was set to use him on offense.

Josh Johnson is more than capable of stepping in on short notice given his experience, but the Ravens were in a tough spot without both Lamar Jackson (ankle) and Tyler Huntley (COVID-19 list) versus the Bengals. However, quarterback probably would not have made a huge difference with the way the Bengals lit up the Baltimore defense. I thought it was odd that John Harbaugh had such a problem with Cincinnati running up the score and passing late when his own team has done similar things over the years.

The most stunning result of Week 16 was without a doubt the Chargers losing to the Texans—and losing handily. Los Angeles is now on the outside looking in for the postseason with two weeks remaining, and the defense must somehow step up at the end of what’s been a disappointing campaign for that unit.

The rare stretch of slow starts came back to hurt the Steelers against the Chiefs, as they fell behind and could not get back into it on Sunday. However, Pittsburgh just needs to get to 9-7-1 and they’ll have a real shot to make the postseason—it starts this Monday night for Ben Roethlisberger’s final home game, a matchup with the Browns.

Baker Mayfield played very poorly on Christmas, but give him credit for standing up and not making any excuses while basically accepting full responsibility for his team’s loss. With the way the Browns are constructed, Mayfield just needs to take care of the football.

The Vikings defense made plays to give them a shot against the Rams, but the offense took too long to get going (not having Dalvin Cook—COVID—and losing Adam Thielen to another ankle injury didn’t help). Now, Minnesota needs to find a way to beat Green Bay for a second time this season when they face off on Sunday night.

The Saints were in about as tough a spot as any team this season after Ian Book was forced to make his first career start without barely any practice time, but New Orleans overall—including star running back Alvin Kamara—just looked flat to me in the Monday night loss. New Orleans will get guys activated for Week 17, and they end the season against the Panthers and Falcons.

Given all the Raiders have been through this season, sitting at above .500 with two weeks remaining is highly impressive. The franchise will be playing with heavy hearts this weekend after legendary coach and broadcaster John Madden passed away at 85 this week.

The run game was completely shut down for the Broncos, and that led to the game never really feeling in their control despite it being close throughout. Denver’s two losses to Vegas have in some ways been the difference in their season.

It wasn’t a triumphant blowout victory, but the Falcons took care of business versus a competitive Lions squad to remain squarely in the NFC wild-card race. Rookie tight end Kyle Pitts went over 100 yards for the third time this season in the win, flashing his impressive ability as a weapon on the outside.

I said I didn’t understand Washington-Dallas being kept on Sunday Night Football instead of something else (like Bills-Pats) being flexed in, and unfortunately football fans were punished with one of the worst games in Sunday night history. Washington appeared to be going in the right direction a few weeks ago, but things have hit a new low for 2021.

It was just one game, but Nick Foles getting a road win at a snowy Seattle makes me question—as I did in the offseason when the Andy Dalton trade went down and Dalton was immediately termed “QB1”—why Foles wasn’t given a shot earlier. Not at least having an open quarterback competition might have been Chicago’s biggest mistake this season.

D.K. Metcalf was able to get on the board with a long touchdown from Russell Wilson, but the Seahawks losing at home to a struggling Bears team is an indication of this just not being their year.

There’s now a lot of talk about the Panthers potentially moving on from head coach Matt Rhule after just two seasons. While I have not been a fan of what he’s done at quarterback (essentially subbing guys in and out of the game for different series), I’ve been very high on him since he was hired, and you must have some patience and let him build. Also, the quote is getting made fun of (I don’t know why), but Rhule is 100% right about it taking years to become an “overnight success”.

Matt Rhule, at 10-21: "I believe (the process) is 1000% working. I just know no one can see it and I apologize. I tell our team all the time 'it took Jay-Z seven years and he had to start his own agency to become an overnight sensation.'"

and there's a Bel-Air reference too 💀 pic.twitter.com/WLRRBngp6n

Robert Saleh unfortunately had to miss last week due to COVID-19, but his team was able to get a win over the Jaguars—highlighted by a 53-yard touchdown run by Zach Wilson. The Jets now have two incredibly challenging opponents to end the season: the Bucs and the Bills.

Again, there is definite progress being shown with the Texans, and beating a playoff-contending Chargers team is a positive sign that David Culley has things on the right track. Rookie quarterback Davis Mills is making a solid case to be the starter for 2022.

Detroit had a close loss to Atlanta, and Jared Goff was yet another big name to miss Week 16 due to COVID-19—thankfully, he’ll be back this week. Lions head coach Dan Campbell sounds like he wants to bring Goff back next season, which I believe would be a great move.

I was happy to see Jake Fromm get an opportunity last week, but the Georgia product had no shot in his first career start. Late in Year 2, Joe Judge’s team still has a ton of work to do.

The Urban Meyer firing hasn’t made a big difference for the Jaguars yet, and this must be frustrating for Trevor Lawrence, who has never lost this much in his life. The Jaguars are apparently keeping general manager Trent Baalke, which—maybe I and many others will be proven wrong in a few years—I think is a disastrous decision. Jacksonville fans are attempting to campaign for Baalke to be let go too, with many changing their profile pictures to clown emojis. I would not be shocked if it works and the Jags change their mind on Baalke.