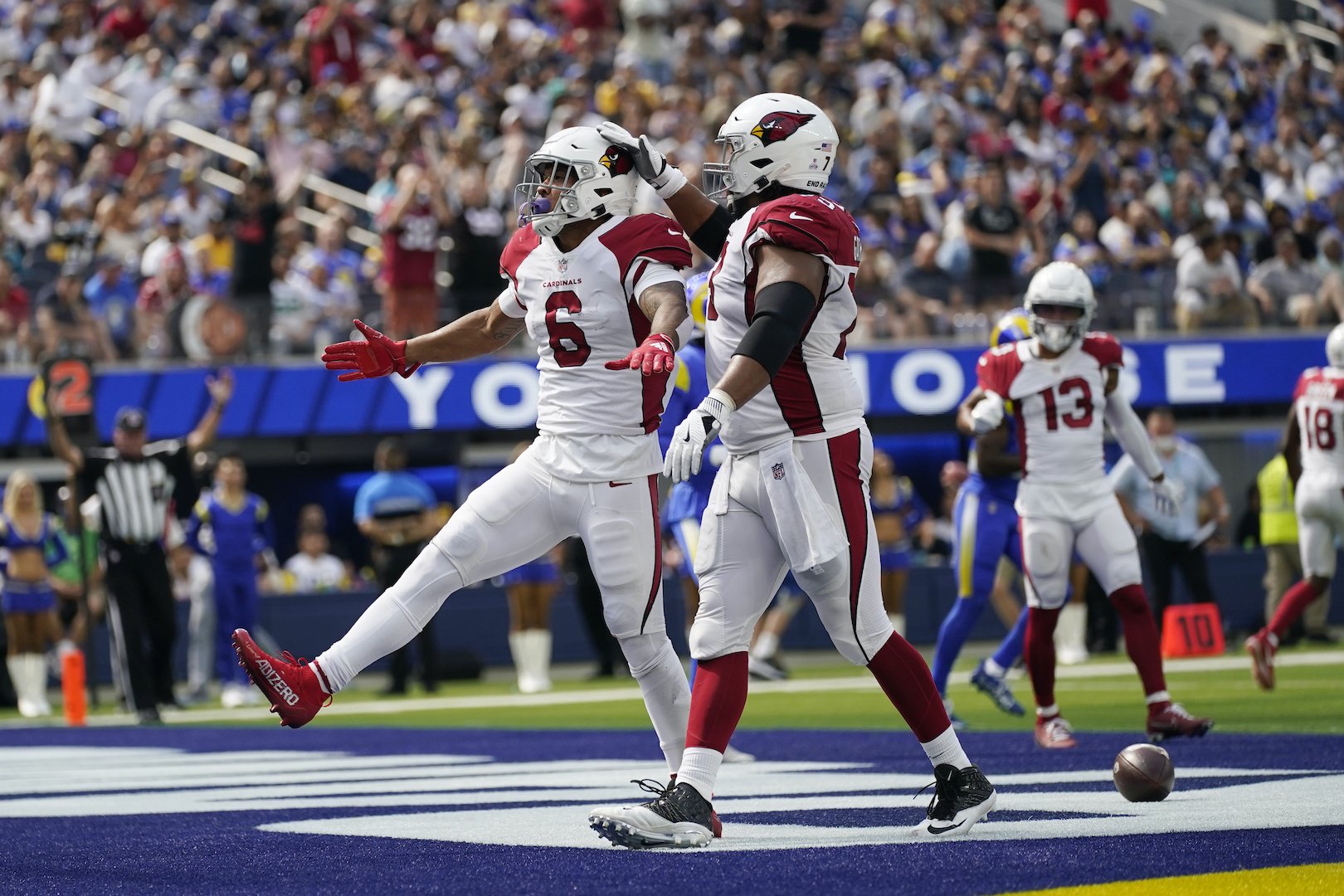 
The Week 5 NFL power rankings will be slightly shorter again, but I’ll look to cover all 32 teams for a second consecutive week when the next episode of The Wolf Sports Show (Apple, Spotify) is out tomorrow.

The top spot in the Week 5 NFL power rankings was very close, but the Bills defense has two shutouts in four games while the offense looks to be back to its 2020 form—if not better. I don’t know why or how, but Josh Allen is flying under the radar as arguably the best player in the league (aside from Tom Brady, who should probably be kept on another level as the greatest player of all-time). Tough task for Buffalo going to Arrowhead this Sunday night, though.

I almost put the Bucs back at No. 1 in the power rankings after a well-earned win in Foxboro for Brady’s return. It was an extremely memorable night, and Tampa Bay again showed they know how to find a way to win games as the defending champions. The Bucs offense might get more back on track not facing Bill Belichick’s defense and putting the surreal situation of last Sunday night behind them.

The Cardinals ended their eight-game losing streak to the Rams in emphatic fashion, and they are the NFL’s lone unbeaten team after four weeks. I’ve said Kyler Murray needs to limit the interceptions against top opponents, and he did a really nice job of taking care of the ball and not trying to do too much last week. Also, it’s good that Murray is spreading the ball around and not worrying about forcing it to DeAndre Hopkins.

The aggressiveness from first-year head coach Brandon Staley continues to be on another level, and I don’t think it’s “the computer” or whatever that he’s going by—it appears to be quick and deliberate gut decisions (analytics people probably hate to hear that) on fourth-down situations. There’s also a clip going around of Staley talking about the importance of running the ball, which nerds don’t think is important.

The Chargers have one of the league’s best rosters and clearly look to be building something special.

It won’t be talked about by the mainstream media, but Matthew Stafford—crowned the MVP after four games—did not play well against the Cardinals, missing a bunch of throws that could have changed the game. That said, it was just one game. We’ll see how Stafford and the Rams as a whole bounce back in primetime this Thursday night.

Aaron Rodgers and the Packers have looked in total control since their Week 1 loss to the Saints. A.J. Dillon got going last week versus the Steelers, and look for the big back to become more of a consistent factor as the weather gets colder throughout the course of the year.

The Chiefs figure to be squarely in the mix for Gilmore as well. The offense, which will get former All-Pro Josh Gordon in the lineup this week, is fine after getting back on track and avoiding turnovers in a win at Philadelphia in Week 4. The defense will have to answer some questions facing Josh Allen on Sunday night.

The Raiders have had some slow starts offensively this season, but they’ve battled back with Derek Carr and the offense coming alive in second halves, and the defense finding a way to get off the field unlike in previous years. Vegas just needs to find a way to start faster.

Baker Mayfield didn’t play well against the Vikings last week, but the Browns played strong defense and ran the ball to get a win and improve to 3-1. I’m interested to see how Mayfield fares when he plays a tough Chargers defense this Sunday.

I considered putting the Cowboys a few spots higher than this. They look like a legitimate Super Bowl contender with their high-powered (and well-balanced) offense and improved defense. The release of veteran linebacker Jaylon Smith was a surprise mostly because he’s been a leader for Dallas, but it was a cap casualty looking ahead to his potential injury guarantees for 2022.

The Ravens drop a couple of spots in the power rankings despite getting a win over a 3-0 squad, but it’s only because I wanted to vault two teams into the top ten. I felt running the ball to get 100 yards instead of a kneel-down was pretty childish, but John Harbaugh is just worried about his locker room, which liked it.

It was difficult to envision Russell Wilson and Pete Carroll’s team losing three consecutive games. The Seahawks came through with a win over the Niners, and they’ll keep the NFC West schedule going when they play tomorrow night at the Rams. Wilson is a big primetime performer, and Seattle would shoot up the rankings with a victory.

I thought it was pretty funny that Jimmy Garoppolo said he’s hoping he’ll just miss a couple of weeks “or something” with his calf injury. But thankfully, it might be less serious than initially feared, so he has a chance to play against the Cardinals this week. If not, Trey Lance is likely to have the offense tailored quite a bit to his dual threat ability.

The Panthers defense had their toughest test of the early part of the season against the Cowboys, and it did not go well. However, it was good to see Matt Rhule’s team bounce back and make it relatively close in the end, which is what you can expect from Carolina every week. And now, the Panthers added more reinforcements at cornerback, adding Stephon Gilmore—it’s well worth the price of a sixth-round pick in my opinion to add Gilmore to a defense that’s been really impressive before last week.

The return to the Superdome following Hurricane Ida was expected to be a triumphant performance by the Saints, but they gave up a lead and were stunned in overtime by the Giants. The New Orleans defense must get back on track versus Washington this Sunday.

The Bengals led for zero seconds of game time against the Jaguars last Thursday night, but the field goal by Evan McPherson as time expired gave them the win to move to 3-1. Joe Burrow put up tremendous numbers, and hopefully the Cincinnati offense doesn’t lose Joe Mixon (ankle) for too long, if at all.

Drew Lock was in a challenging spot entering the game for Teddy Bridgewater while battling a tough Ravens defense. It was the 17-point second quarter that did Denver in. The Broncos have an opportunity to bounce back facing a Steelers team with their backs against the wall in Week 5.

The Patriots didn’t get the win, but they were inches away from going ahead with under a minute to go. Bill Belichick and the New England defense did about as well as possible limiting Tom Brady and the Bucs offense, and hopefully people can recognize both Belichick and Brady are legends, and one didn’t “make” the other. I was looking forward to Stephon Gilmore giving the Pats a boost in middle of the season, so the parting of ways was a big surprise.

Down both A.J. Brown and Julio Jones due to hamstring injuries, it felt like the Titans were in serious danger of getting upset by the Jets last week. But Derrick Henry carried the offense just fine—it was the defense that gave up big plays in the loss. In Week 5, Tennessee knows they cannot take the Jags lightly in a wide-open AFC South.

Again, I’m not sure how the Steelers get back on track, but I think they can figure out a way to do it with Mike Tomlin and a talented roster. Tomlin is 100% behind Ben Roethlisberger as the team’s quarterback this season despite a lot of outside noise, but I’m certainly watching Pittsburgh as a player for Aaron Rodgers in 2022 if Rodgers does indeed leave Green Bay.

The Cleveland-Minnesota matchup was a strange one in some ways, as both offenses seemed just off—including Kirk Cousins after a fast start to the year. The good news is the Minnesota defense has stepped up as of late, and they’ll look to keep it going versus Detroit this week.

Washington found themselves in another close game last week, and a clutch end-zone catch from Terry McLaurin help put them over the edge to get to .500 after four games. The stuff with the team trainer apparently getting raided by the DEA at the facility is wild.

The Colts got on the board with their first win of the season, with the offense featuring Jonathan Taylor a little bit more (though I’d argue still not enough) and the defense led by Darius Leonard making plays. A win at Baltimore on Monday night would be massive to perhaps get the season completely back on track.

It’ll be Justin Fields from here on out, and the rookie looked a lot better in a more favorable matchup with the Lions last week. Losing running back David Montgomery is a big blow to the Chicago offense, but Damien Williams is more than capable of carrying the load—and the Bears can still get receiver Allen Robinson more involved.

Again, it’s still early, but the Dolphins appear to be a team that might take a big step back from their strong 2020 campaign. Not having Tua Tagovailoa in the lineup hurts, but it’s just not been great all-around for Miami—and now they visit Tampa Bay this week.

Right tackle Lane Johnson dealing with a personal matter leaves the offensive line, which is battling injuries again this season, even weaker. But the offense played well last week against the Chiefs, and it was a promising bounce-back from Jalen Hurts. Philly’s defense doesn’t have much of an identity at the moment, nor does the offense (unlike the Chargers, the Eagles apparently don’t care for running the ball to help set up the rest of the offense).

A crushing defeat late is nothing new for the Falcons. 2-2 would have been sweet ahead of a trip to London, but now they’ll look to avoid 1-4 while facing the Jets. Cordarrelle Patterson has played like a superstar this season, and he caught three touchdowns in Atlanta’s close loss to Washington.

If I played in a survivor pool, the Saints would have been in strong consideration for my Week 4 selection. The Giants showed their toughness under Joe Judge, coming back to win on the road while staring at a potential 0-4 record. Saquon Barkley looks fully back, and Daniel Jones (402 passing yards at New Orleans) doesn’t get nearly enough credit.

You could see in Zach Wilson’s face after the game that he was very relieved to get an NFL win under his belt. The BYU product flashed his big-play ability in the upset of the Titans, and he’ll look to deliver some “wow” moments across the pond on Sunday while the Jets attempt to build a winning streak.

It’s not equating to wins, but Jared Goff is playing well for the Lions, as he’s finding a way to hit on big passing plays despite a lack of big-time weapons on the outside—Quintez Cephus and others deserve credit for stepping up and making plays for a quarterback that gives them opportunities to do so. Detroit is in a rebuilding process, but they should improve and surprise some people as the season progresses.

Davis Mills didn’t have much of a chance facing a top-notch Bills defense last week. The Texans wanted to put more on Mills’ plate, but a balanced offensive attack will help the rookie more than anything.

The good news first. Trevor Lawrence is getting more comfortable and taking care of the ball while still making splash plays—the Jaguars are in great shape at quarterback. I think everyone else has just about covered the Urban Meyer situation. Not great. The worst part about it is that Meyer didn’t take the team plane back with, well, his team after losing a close game on Thursday night. The Jags can go nowhere but up from here.