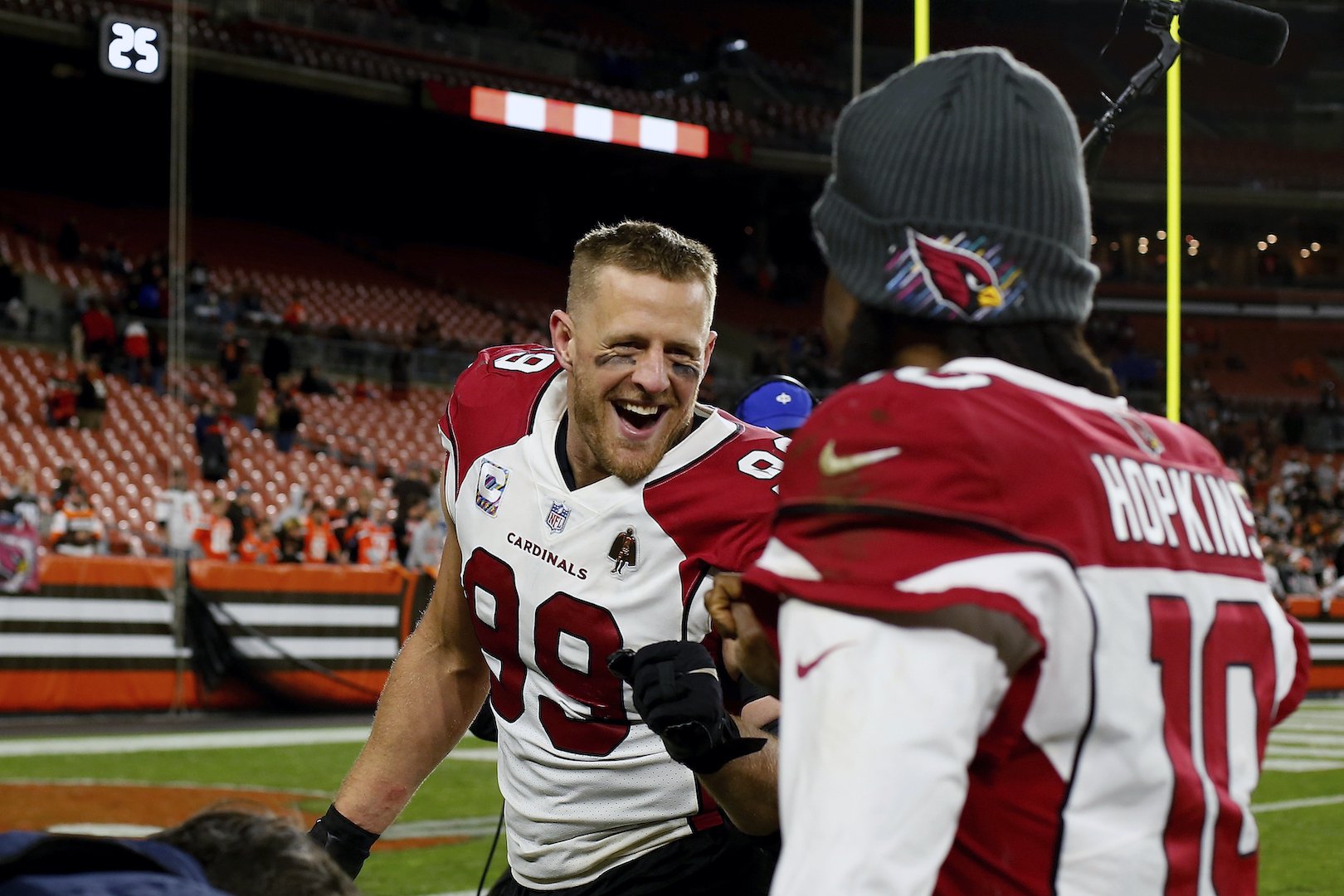 
The Week 7 NFL power rankings are slightly shorter than usual, as I tried for a more quick-hitting format this week. For more thoughts on each team, check out The Wolf Sports Show podcast (Apple, Spotify).

The Bucs nearly gave up the lead last Thursday night at Philadelphia, but Tom Brady and the offense came through to ice the game late in the fourth quarter. Brady’s chemistry with Antonio Brown, who, again, looks like he’s in prime form this season, is one of the most underrated storylines in the league.

Kliff Kingsbury was hired as an air raid guy, but the Cardinals have become a very physical team that’s stingy on defense and can run the ball on offense with James Conner and Chase Edmonds. Arizona was able to handle Cleveland and advance to 6-0 despite not having their head coach due to COVID-19.

The Bills were a failed quarterback sneak away from probably winning on the road versus the Titans. Buffalo still has a great team, and they shouldn’t be docked much in the power rankings as they head into their bye week.

Coming off one of the biggest and most convincing wins of any team this season, the Ravens move up into the top five of the power rankings, and they currently sit at first place in the AFC as the conference’s only five-win team. All three veteran running back (Latavius Murray, Le’Veon Bell, Devonta Freeman) found the end zone for Baltimore last week.

The Rams coasted to victory over the Giants, and they are heavily favored to get to 6-1 this week against Matthew Stafford’s old team. It hasn’t been as perfect as some might claim, but LA is off to an outstanding start to the season with their new quarterback.

Green Bay is playing solid all-around football, and it helps to have a rushing attack led by Aaron Jones and A.J. Dillon. The funniest moment of Week 6 probably belonged to Aaron Rodgers, who yelled at Bears fans (many of them giving him the finger), “I own you… I still own you!”

Trevon Diggs had another pick-six and his seventh interception of the season already. It’s simply been one of the greatest stretches by a defensive back in league history. With an opportunistic defense and a stacked offense, the Cowboys are legit.

Last week against the Ravens was probably the worst outing of Justin Herbert’s career. He just didn’t appear comfortable all day, and he was just slightly off on his passes when he’s normally super accurate. Herbert has been so good early in his career, which made the performance surprising; but he’s still a young quarterback, and everyone has off games at some point.

Patrick Mahomes had another bad interception in the Chiefs’ win against Washington, and he’s seemingly been pressing a bit this season—which he probably doesn’t need to do in Andy Reid’s offense. Kansas City will now have to contend with the NFL’s leading rusher this weekend.

Derrick Henry is the great equalizer, pretty much keeping the Titans in every game. He’s ultra-reliable yet also a total gamebreaker. For the first time, I wish I was a big-time sports bettor—five figures on Derrick Henry leading the league in rushing would’ve probably been a great investment this preseason. Also, it’s funny how long it took the groupthinkers to realize that Henry is an elite Hall of Fame-level talent.

As I’ve stated before, the Lions can be a difficult win with the way they play. But the Bengals had zero trouble with them, playing a strong game on offense and defense ahead of a huge early AFC North matchup with the Ravens in Week 7. Not to get too far ahead, but a win for Joe Burrow and Cincinnati at Baltimore might be looked at as a game that is the turning point for them as a franchise

Don’t count out Mike Tomlin and the Steelers. Even at home facing a Russell Wilson-less Seahawks team, beating Seattle is no easy task, but Pittsburgh came through to get back to .500 at their bye. These past two games, Ben Roethlisberger has looked more like himself, and improved play from the offensive line has had a lot to do with that.

Baker Mayfield is out tomorrow night, as are Nick Chubb and Kareem Hunt, and the offensive line is dealing with injuries. The Browns are beat up (and promising rookie linebacker Jeremiah Owusu-Koramoah is also out for a few weeks), but Kevin Stefanski should get his guys to compete. It’s interesting that the Browns were beaten by a team without their head coach; they, if anyone, should know what it’s like to rally in that type of situation after they did it last postseason.

The Saints come off their bye week healthier on both sides of the ball, and the defense in particular will look to power the squad while Jameis Winston hopefully takes care of the ball on offense.

Kirk Cousins has been superb late in games this season, and the Vikings are a couple of plays away from being 5-1 (though, granted, you could say things like that for a lot of teams each year). Losing Patrick Peterson (hamstring) for a while isn’t great for a defense that’s played better this season after adding Peterson and more to the mix this offseason.

Sam Darnold did not play well last week, but he came through with clutch throws to force overtime against the Vikings. Still, the Panthers have dropped three straight (and not having Christian McCaffrey has clearly hurt), and Matt Rhule sounds like he’s ready to do a big shift in-season, promising to become a team that runs the football more. I like that decision, and it should open things back up for D.J. Moore and the receivers while also playing to the dynamic defense.

The bye week appears to have given Jimmy Garoppolo enough time to return from his calf injury after missing just one game. The offense should be fine, but it’s the defense that I feel needs to start taking over games for San Francisco.

Rich Bisaccia was able to get the Raiders to respond and win a key divisional matchup in a very difficult spot after Jon Gruden was forced to resign last week. The Raiders have leaders like Derek Carr that will help keep the team afloat during an unprecedented situation. FOX Sports’ Jay Glazer reported that several Raiders players went to Gruden’s house for closure, which isn’t surprising to me.

Despite the boost in talent this offseason, the Patriots still feel like they haven’t had quite enough juice to win games against top teams in 2021. They might kind of need to learn how to win all over again with this new group led by rookie quarterback Mac Jones, who receiver Kendrick Bourne said is “special” with the way he throws the ball making it feel like you’re catching a pillow.

Seahawks head coach Pete Carroll loves running the ball, and he said after their close loss to the Steelers that it’s important. It’s difficult to argue with the results, as Seattle basically controlled the second half after a 14-0 halftime deficit to make it a game. Effective running also takes pressure of the defense, which showed good signs on Sunday night after another awful start to the season. If the Seahawks defense can have a turnaround like it did in 2020, they can push for a playoff spot.

The Bears are extremely deep at running back, but it looks like they have something in rookie Khalil Herbert, who showcased tremendous vision and ability to pick up positive yardage last week. Keep an eye on him moving forward, but it might be tough for Chicago to run this week on the Tampa defense. The Bears defense must get after Tom Brady this Sunday to stay in the game.

While this is pretty low in the power rankings, I like what I’ve seen from the Colts recently. Carson Wentz is actually playing really well (and he got T.Y. Hilton in the lineup for the first time, though Indy lost Parris Campbell to a foot injury), and Jonathan Taylor is a difference-maker out of the backfield. This is a huge one for the Colts this Sunday night against the 49ers.

Running the ball on the Bucs is a near impossible task (the Eagles did have some nice runs late in the game with Miles Sanders, though), but I think a little too much is being put on Jalen Hurts’ plate right now. However, Hurts again showed his ability late in games to just find a way to make plays when things are close. They were effective for a stretch in Week 1, but Philadelphia probably needs to run fewer bubble screens, as they just aren’t working anymore.

The Broncos have lost three straight and continue to look like they benefitted from their early-season schedule, but Von Miller is determined to wreck the game for the Browns this Thursday night, and it wouldn’t be the first time he called his shot on a short week.

Taylor Heinicke has been struggling as a passer as of late. It’s been a theme around the league that I’ve hit on for a few guys, and Heinicke is no different: he’s a young quarterback without a ton of experience, so there’ll naturally be some inconsistency as a passer. Heinicke will need to step up against the Packers this week.

Coming off the bye, look for the Falcons to keep rookie tight end Kyle Pitts involved after he broke out in London a couple of Sundays ago. It’ll also be good to get receiver Calvin Ridley back in the mix after he missed the last game due to a personal issue.

The Jaguars were ecstatic to get their first victory to break the 20-game losing streak and get their first win under Urban Meyer—it’s probably not all forgotten and forgiven, but it’s a good sign for Meyer that the team has played hard since his off-field debacle. We’ll see if this is something to build on when they come off the bye next week.

I highlighted cornerback Xavien Howard and Byron Jones in last week’s power rankings, but neither of them played in the London loss to Jacksonville. Miami opted against the bye week when returning from another continent, which was interesting, and it’s imperative that they pick it up ASAP following this disappointing start.

It felt like the Giants might have taken a step forward when they beat the Saints a couple of weeks ago, but they have been destroyed by injuries and have been blown out in consecutive weeks. New York is not in a good spot.

The Jets were off the New York papers for a week, and they return to action to face the Patriots for the second time this season. Zach Wilson is looking for a little redemption after New England picked him off four times in Week 2.

Good thing the Texans were able to start their season with a win, because it’s looking bad right now with the 6-0 Cardinals and the 5-1 Rams on deck. Houston released long-time edge rusher Whitney Mercilus as the teardown continues.

Dan Campbell said quarterback Jared Goff—and others, not just him—needs to step up. But Goff is in a tough spot with, in my opinion, is by far the least support on the outside when it comes to playmakers. Personally, I’m pulling for Goff to do well against his former Rams team after he was pushed aside and basically treated—by the media and maybe even the team to some extent—as the scapegoat for LA not winning a Super Bowl in the past few years.