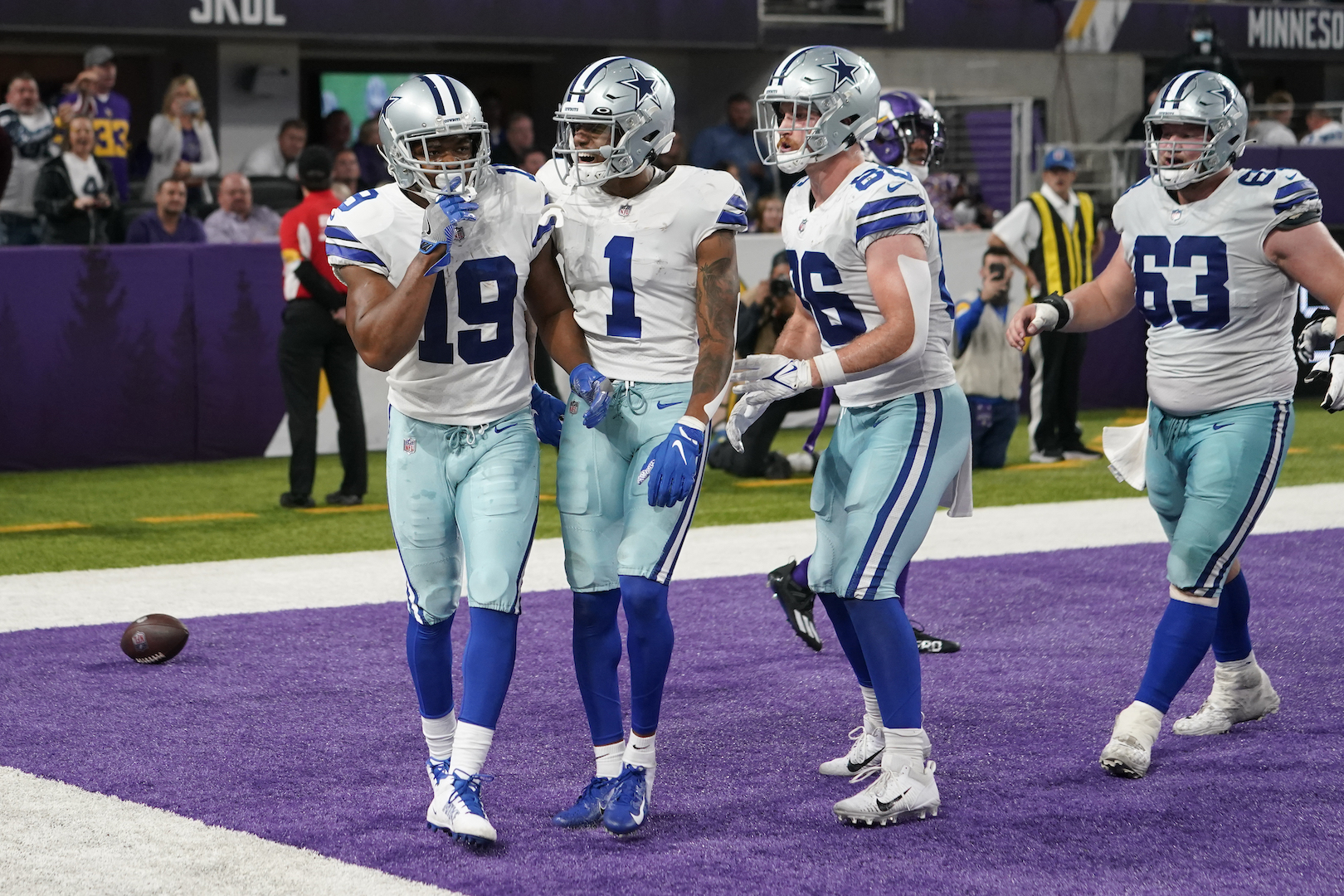 
I sometimes try to make these shorter, but it often does not work out. This time, the Week 9 NFL power rankings will actually be relatively brief. You can get more on all 32 teams by listening to The Wolf Sports Show (Apple, Spotify, Google Podcasts).

The Buccaneers are coming off their second loss of the season, and Tom Brady uncharacteristically threw a late pick-six against the Saints with a chance to go ahead. They still remain at No. 1, and I think the bye comes at a good time for them as they look to get healthier.

It took some time to get going for Buffalo, but they eventually coasted in another win over a Miami team they’ve had the number of. Quarterback Josh Allen was on the ManningCast of Monday Night Football the other night, and he represented himself and the Bills very well.

Aaron Rodgers, Matt LaFleur, and the defense (which did a great job of containing Kyler Murray) pulled off the huge upset without Davante Adams and Allen Lazard (COVID list) last Thursday night, but now Rodgers himself is out for Week 9’s matchup with the Chiefs after testing positive for the virus. Really unfortunate, but Green Bay has been in a good spot overall.

I’m concerned about Kyler Murray’s health, as he was at less than 100% down the stretch last season and he and the offense fell off a bit. But the Cardinals were arguably a miscommunication away from and 8-0 start.

There was some consideration to putting the Rams higher than this in the power rankings, maybe even as high as No. 1. The Von Miller addition could turn out to be a major boost if the All-Pro pass rusher is rejuvenated in a new spot. LA catches a break not having to face Derrick Henry on Sunday night.

The Cowboys appear to have something special brewing this season. Getting a road win on Halloween Night with a backup quarterback (Cooper Rush, who came up clutch with the late game-winning score to Amari Cooper) is something championship-caliber teams pull off. As previously stated, Dallas looks legit.

I’ve argued for at least a couple of years now that Derrick Henry is without question the most valuable non-quarterback in the league. Losing him for six-to-ten weeks is brutal for the Titans. The defense will need to step up as they did last week in the win over the Colts, and Julio Jones needs to get healthy and get going to help on offense.

They lost to them last postseason, which people have seemingly forgotten, but the Saints do have Tom Brady’s number a little bit defensively since he joined Tampa Bay. The Jameis Winston ACL tear is sad to see, and we’ll see what the Saints do there. Taysom Hill is set to return this week and could just take over as the starter, but Trevor Siemian did a nice job against the Bucs—and keep an eye on Drew Brees (obviously there would be the ultimate familiarity there) or Philip Rivers coming out of retirement if the Saints are struggling in a few weeks.

Entering last week, the Bengals sounded fully prepared for the Jets (i.e., that they would not take them lightly while riding high off the Baltimore win). I’ll chalk up the loss to New York as an off day; it was a strange game they felt in control of for most of the afternoon.

And suddenly, the Ravens are now back up in the AFC North by half a game while they were on the bye. There could be reinforcements on offense in Sammy Watkins (hamstring) and Latavius Murray (ankle).

It is nothing compared to the death of a young woman and her dog, but the Henry Ruggs situation is yet another controversy for the Raiders to deal with this season. The Ruggs thing is flat-out awful, but on the field, Vegas loses a key field stretcher that was making a step forward in his second season.

Justin Herbert had some trouble with Bill Belichick’s defense in Week 8, but defensively, at least the Chargers showed some improvement against the run coming off the bye. I think it’s important for them to find a way to get Mike Williams heavily involved again, as he’s been quiet the past couple of outings.

While it might not be pretty, the Steelers are finding a way to win games, and the talk of Ben Roethlisberger being “washed” have faded away to some extent—he’s making good throws and taking care of the ball. The win over the Browns is a little bit of redemption from last January.

The Chiefs were able to get a close win over the Giants on Monday night to get to .500, but they drop a couple of spots in the power rankings. Perhaps the switch for the season will flip on similarly to how it has in middle of games so many times the past few years, but the Chiefs just look like an ordinary team right now.

Patriots fans should be extremely excited about where this squad is at. Mac Jones says he didn’t think he played well in the win over the Chargers, but that everyone around him played great. That’s what winning teams do.

A loss and another subpar performance by the offense are now brought into even more light with the Odell Beckham Jr. situation. Baker Mayfield can’t be happy about the whole thing, and it appears OBJ might be done in Cleveland.

Losing Danielle Hunter for the year to a pectoral injury is a massive blow to the Vikings defense, as he’s one of the most underrated stars in football. The end of the loss to the Cowboys last Sunday night was pretty disgusting to watch for me, as the offense attempted a bunch of check downs instead of taking a chance on throwing the ball down the field to get into Hail Mary position.

In his team debut, All-Pro cornerback Stephon Gilmore made a key interception. The Panthers can be carried by their defense to some extent, but getting Christian McCaffrey (hamstring) back soon would be a big jolt for the other side of the ball.

Geno Smith played well (as he has while filling in for Russell Wilson), and the Seahawks handled the Jaguars at home. When Seattle emerges from the bye, they might have Wilson back while in the thick of the NFC wild-card race. The Seahawks are not a team to count out.

“ALL THINGS ARE POSSIBLE” w/ Jesus! Phil 4:13
HE is my healer! My comforter! My Provider!

Wasn’t supposed to throw for awhile..a few weeks, but by Prayer & Dedication & tremendous help from my Performance Team!

Today was my first day back. One step at a time. Grateful! pic.twitter.com/lJC6RF71WP

Carson Wentz has done some good things for the Colts this season, but he had a couple of very bad interceptions late against the Titans that will drive you crazy as a coach or a fan. The overtime interception was just totally boneheaded—just look at how wide-open Jonathan Taylor is underneath, yet Wentz thew into triple coverage.

Jimmy Garoppolo responded to the criticism and played well against the Bears, including running in for a couple of touchdowns down by the goal line, showing his toughness. San Francisco will now host Arizona; they lost to the Cards earlier this season when Trey Lance was in the lineup.

Denver traded away franchise player Von Miller, but they got a strong return in two Day 2 picks in the draft. The concern now becomes how the team responds after one of the best players was traded away while at .500 and in the playoff mix.

The defense along with Boston Scott, Jordan Howard, and the rushing attack powered the Eagles’ win over the Lions last week. They responded after some really poor play on defense entering the week. A win versus the Chargers this Sunday would make the Eagles a team to watch.

Calvin Ridley is stepping away from the team to deal with personal mental health issues, and the Falcons will miss him, as they did during the Week 8 loss to the Panthers. Hopefully he’s feeling OK and opts to rejoin his teammates soon. Atlanta would be in a much better spot with Ridley complementing Kyle Pitts, Cordarrelle Patterson, and others on offense.

Losing safety Eddie Jackson early in the game hurt, but Chicago’s defense had a shockingly bad outing in the loss to the Niners, giving up big plays and not being able to get to Jimmy G. On the bright side, Justin Fields showed some flashes and had a touchdown pass and touchdown run that gave a glimpse at his raw talent.

(I think that throw is more impressive than the run.)

Watching the ManningCast, you could see that Peyton and Eli are high on the ability of Daniel Jones, who played well versus the Chiefs. Remember, the Giants have been without a full healthy skill group for most of Jones’ career, and that’s continued into this season.

Washington just doesn’t seem to have enough juice right now, but the bye week should help them get healthier as they look to somehow go on a run in the second half.

I mentioned Mike White and liking him out of college, and he showed why that was the case in his first career start and victory. White can flat-out sling the ball, and the Jets have some confidence going heading into a short week.

Urban Meyer has not looked pleased on the Jaguars sideline, and no momentum was built after the team’s first win of the season. A date with the Bills this Sunday is no easy task.

The Dolphins have handled the quarterback situation almost as poorly as you could. I don’t know why you’re interested in a guy with so many unsettled serious off-field issues in the first place, but I think it’s impacted Miami all season.

Houston was getting blown out by the Rams, but a 22-point effort late in the game might have been something to build on moving forward. The Texans also broke some bettors’ hearts in the process while making the mini comeback.