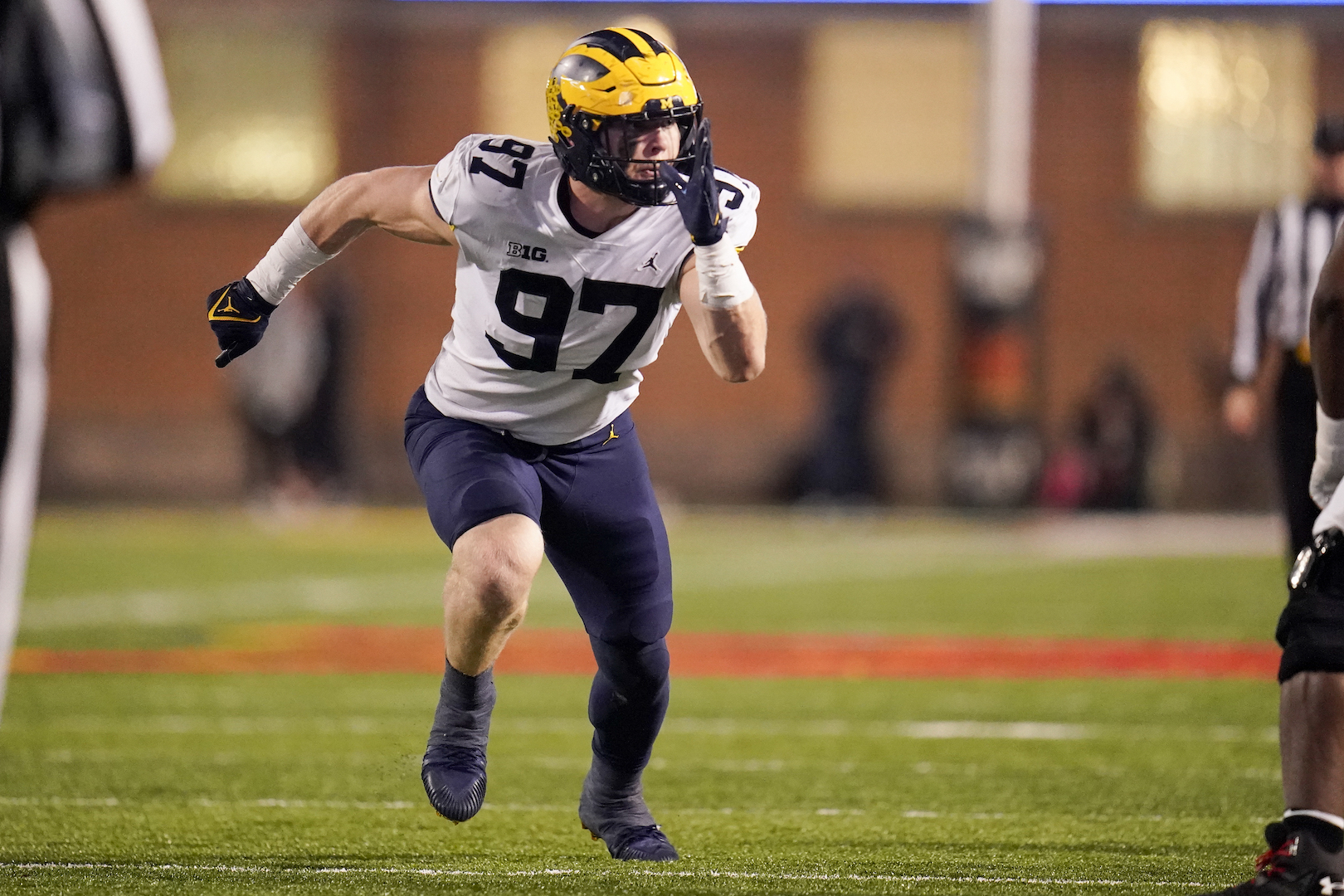 
We are still very early in the process (there are a whopping nine head coach vacancies to fill), but people love mock drafts, so I’ll do my best to give predictions for the first round without knowing the head coach of more than a quarter of the league.

Jacksonville has Josh Allen turning into a superstar on one edge and K’Lavon Chaisson—who won’t turn 23 until the summer—on the other, so they could opt for the top offensive tackle in Neal to protect Trevor Lawrence. The 350-pounder played left tackle, right tackle, and left guard in three seasons with the Crimson Tide.

Aidan Hutchinson will draw a lot of buzz to Detroit having played his college ball at Michigan, but Thibodeaux might have a little more upside and be a better scheme fit. I could also see Dan Campbell loving his toughness having played through injury for the Ducks.

Although trading down will be an option, Houston needs an impact player, and Hutchinson can be just that on the edge. In addition to his on-field ability, the senior was also instrumental in turning Michigan’s culture around under head coach Jim Harbaugh.

Karlaftis had somewhat limited college production (14.0 sacks in three years), but the Jets would suddenly have a group like San Francisco’s from a few years ago with plenty of promise on the defensive line. This is a huge year for general manager Joe Douglas with two picks in the top ten.

The Giants could arguably upgrade the entire offensive line aside from left tackle Andrew Thomas, and Okwonu feels like a prospect new general manager Joe Schoen would target. He notably has experience at left guard if New York wants to solidify the left side.

Carolina drafted Brady Christensen in the third round last year, but he can easily kick inside if Cross is thought highly enough to select here. At first glance, the Mississippi State standout looks similar to the aforementioned Andrew Thomas.

Some may scoff at a center being drafted this high, but Linderbaum is one of the best prospects in the class and would continue to solidify the needs on the offensive line for New York. There is no reason the Giants can’t compete in 2022 with a strong offseason.

Stingley Jr. was thought of as a potential No. 1 overall pick after his first year at LSU, as it’s rare to find a cornerback with his combination of size and movement skills. Atlanta pairing All-Pro A.J. Terrell with Stingley Jr. on the other side would be exciting.

Dean is a prospect that goes way too low in most mock drafts, but I have him as my No. 3 overall player, and I’d be shocked if he slips to the back half of Round 1. Overlooking Georgia’s defensive leader based on his size would be a massive mistake by NFL teams.

Even coming off an injury, it would be a surprise if Marcus Maye re-signed in New York based on how the situation played out last year, so the team could be looking for a replacement on the backend. Hamilton is big and rangy with the ability to generate takeaways behind an aggressive front.

The first quarterback goes off the board to Washington, and I think the decision for them (if presented the opportunity) would come down to the pro-ready game of Pickett versus the upside of Liberty’s Malik Willis. Offensive coordinator Scott Turner’s offense might be a better fit for Pickett.

For one reason or another, the young cornerbacks selected by the Vikings haven’t panned out in recent years, so we’ll see if they start fresh under a new regime. McCreary would be an ideal candidate to start alongside Patrick Peterson (if re-signed) or step right in as a potential No. 1 option.

Cleveland needs to add playmakers for Baker Mayfield this offseason, and Williams still has a strong case to be the first wideout off the board following a torn ACL suffered in the College Football Playoff National Championship. Williams’ downfield ability would make defenses pay for stacking the box versus Nick Chubb.

Baltimore seems primed to do some shuffling behind Marlon Humphrey this offseason, and Gardner is an excellent fit if they opt to draft a cornerback early in a few months. The Detroit native had three interceptions in all three years at Cincinnati.

Ojabo had one season of significant action for the Wolverines, but he was a major piece of their Big Ten Championship squad with 11.0 sacks and five forced fumbles. I’d frankly be surprised if the Eagles passed on him as the successor to Brandon Graham.

Elam also feels like a prospect Philadelphia might be targeting, and he’d be the immediate No. 2 behind Darius Slay at cornerback. If projecting trades for this mock, the Eagles would be sending away one of their three first-round selections.

The Chargers having a shaky defense under Brandon Staley—considering all their talent on that side of the ball—was a disappointment, but perhaps Davis would be the guy in the middle that helps put it all together. “Godzilla” can be a terror against the run.

Sean Payton stepping away combined with the cap situation in New Orleans makes this a more complicated selection, but Dotson is the ideal complement to Michael Thomas. Losing Payton’s offensive mind will make it tougher to move the ball without more firepower at wide receiver.

Philadelphia is a candidate to shell out big money to a top wideout in free agency, but the dream options such as Davante Adams and Chris Godwin are likely not realistic. If so, London can be a downfield, possession complement to DeVonta Smith’s all-around game.

Mason Rudolph has shown enough under center to get an expanded shot in Pittsburgh if an obvious upgrade isn’t presented, but Willis can develop for a year before hopefully becoming a dual-threat option that can match the young guns in the AFC.

While more playmakers for Mac Jones will also be a priority, New England finding a way to slow down Josh Allen could be the priority ahead of next season. Lloyd can influence the game in a variety of ways as an inside linebacker.

The Raiders must hit on this selection following all the early misses in recent drafts, and Wilson can be the No. 1 perimeter target with Darren Waller and Hunter Renfrow working the middle of the field. If Derek Carr remains under center in Las Vegas, Wilson’s smoothness would be a nice stylistic fit in the offense.

Chandler Jones is hitting free agency in March, so the Cardinals could get a young replacement for him if Jackson is on the board. The USC product would be another upside prospect to join Isaiah Simmons and Zaven Collins in the front seven.

Green falling to Dallas would be perhaps a best-case scenario for them, as he can slot in at left guard with Connor Williams set to hit free agency. Bolstering the offensive line is an underrated need for the Cowboys.

Buffalo should do whatever it takes to get a stud edge rusher this offseason, but it’s easier said than done. Towards the end of Round 1, Booth Jr. would be a potential replacement for Levi Wallace if the former undrafted free agent cashes in with a long-term deal elsewhere.

Despite the in-season acquisition of Zach Cunningham, the Titans can still add another linebacker if they feel highly enough about one here. Muma might be helped by the success of 2020 third-rounder and former college teammate Logan Wilson.

Tampa Bay certainly has a ton of high-end talent, but they once again have quite a few holes that can be filled in the draft. Walker has inside-out versatility and would be best as a versatile 3-4 defensive end in their scheme.

The lack of weapons behind Davante Adams was apparent in the Divisional Round, so Green Bay needs to be collecting skill-position talent if trying to keep Aaron Rodgers becomes a months-long mission. I’m not sure Burks’ style is that of a bigger Deebo Samuel like many have decided on, but he was a proven playmaker in the SEC.

Penning starting at left tackle over stud rookie Spencer Brown at Northern Iowa (Brown played right tackle) shows the kind of upside he has, and the Bengals will be entirely focused on protecting Joe Burrow by Week 1 of the 2022 season.

Faalele is an absolute monster at six-foot-nine, 380 pounds, and he can start on Tua Tagovailoa’s blindside with a hole at right tackle. The Australian would give Miami a very powerful right side along with Robert Hunt.

Jared Goff having more firepower is key for Detroit’s chances of making a leap next season, and Olave can give them a long-term duo with Amon-Ra St. Brown at wide receiver. The offense isn’t far off from a substantial improvement, and the NFC North appears to be more up for grabs than it was last week.

At six-foot-two, Emerson profiles as the kind of cornerback Kansas City has preferred under defensive coordinator Steve Spagnuolo. Wide receiver could be an option, but added defensive depth might help the Chiefs avoid another slow start on that side of the ball.