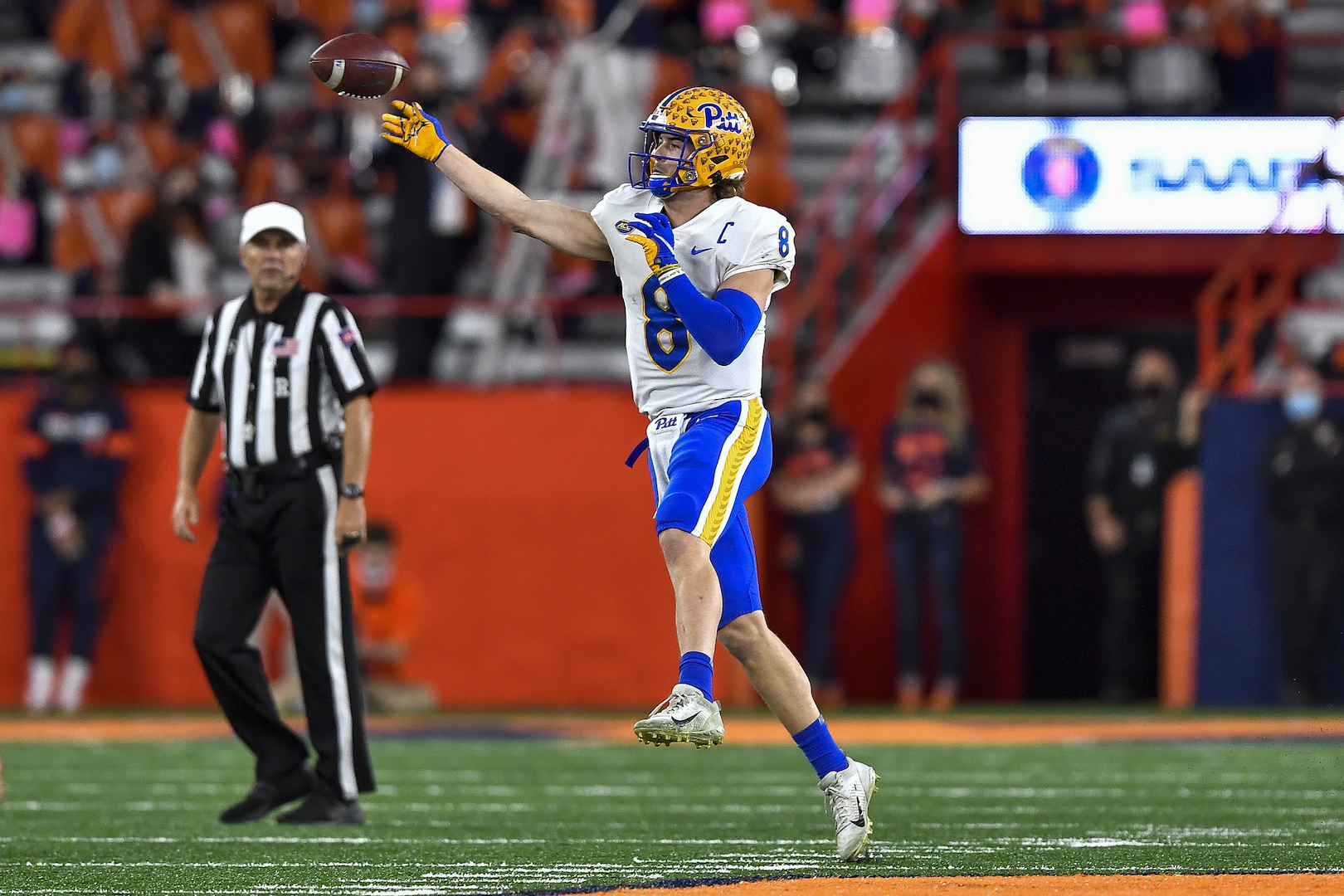 
The 2022 NFL Scouting Combine has concluded, and the impossible exercise of a mock draft at least has more puzzle pieces to work with. Things will likely change quite a bit following free agency, but this is how I could see the first round shaking out as things currently stand.

Many in the media have seemed to be hinting Jacksonville could opt for Ikem Ekwonu over Neal, but the six-foot-eight monster is a cleaner overall prospect with tremendous upside. The Jaguars would suddenly have a franchise cornerstone at quarterback (Trevor Lawrence), left tackle (Neal), and pass rusher (Josh Allen) to build around.

I had the Lions taking Kayvon Thibodeaux in the first mock draft, but the edge now goes to Hutchinson as he stays home to play for Detroit. The intangibles that helped turn Michigan into a playoff team are a definite factor with Dan Campbell trying to turn the Lions around.

A slip is possible for Thibodeaux—who didn’t help himself by not taking part in on-field drills at the Combine—but a player with his talent still has a good chance of going in the top five. Philadelphia would instantly boost their pass rush in a wide-open NFC and has the ammo to jump the Jets.

This might seem high for Gardner, but he’s the perfect fit in Robert Saleh’s defense. I would anticipate general manager Joe Douglas holding out hope that Mekhi Becton is at his best in 2022, and we’ll have a better idea of what the New York teams might do after free agency.

This would be a bit rich for me, and new general manager Joe Schoen has talked about not needing to build an offensive line in the first round. However, there are enough media members high on Ekwonu that I could see a traditional scout like Schoen taking him to slide in at either right tackle or left guard.

I’d say the selection here is simple: if Carolina isn’t able to acquire a quarterback before the draft, they’ll take one here as David Tepper locks in on his long-term answer at the position. The presence of Sam Darnold wouldn’t deter them from taking Pickett.

Washington seems determined to get a veteran, but Russell Wilson could be the only option that would preclude them from still taking a rookie. Willis could benefit from a couple of years sitting behind someone like Jimmy Garoppolo or Marcus Mariota.

The usage of Cordarrelle Patterson in Arthur Smith’s offense could be an indication of Atlanta being very high on Burks because of his versatility. A duo of Kyle Pitts and Burks would be a headache for opposing defensive coordinators.

Dean was my choice here in Version 1.0, and based on how good George Paton’s first draft was, I trust he’d take a top prospect that slips. In general, the league allowing Dean to fall out of the top ten would be a mistake.

Walker’s draft stock is rocketing based on his Combine performance, and while that can be a dangerous game to play, there is no doubt the on-field instincts are there for him. The 32nd-ranked defense of the Jets would be a whole lot better with Walker and Carl Lawson—coming off a torn Achilles—on the edge.

Finding an early landing spot for Davis is difficult looking at the holes for teams drafting high, but imagine trying to run on a trio of Leonard Williams, Dexter Lawrence, and Davis. The monster defensive tackle erased any misguided concerns about his upside as a pass rusher with his performance on Saturday.

Notre Dame safety Kyle Hamilton is still on the board, but would the analytically driven front office of Minnesota take a safety with money already tied up in Harrison Smith? I’ll predict they instead target the athleticism and peak play of Stingley Jr. to join the secondary.

Wilson to the Browns is a very popular pairing, and the franchise will rely on him having an impact similar to Ja’Marr Chase in the division. I also wouldn’t be surprised if the team took a gamble on Jameson Williams—recovering from a torn ACL—because of his ability to stretch the field and open up space for Nick Chubb.

Many believe Hamilton is the best overall prospect in the class, so he could very well be long gone by the time Baltimore is on the clock. It’s worth pointing out that Derwin James dropped to No. 17 overall just a few years ago.

Houston being able to drop out of the top five and still get Cross—arguably a top-five prospect—would be a home run. Depending on what happens with Deshaun Watson, Laremy Tunsil, and others, the franchise could have plenty of draft capital to rebuild.

Linebacker is a position fans are clamoring for in Philadelphia, but No. 2 cornerback is a significant need as well. McDuffie on the backend and Thibodeaux up front would be a strong defensive haul for what—again—looks like a wide-open conference.

Wide receiver has been brought up as a need for the Chargers, but I don’t see them going there if Mike Williams returns. Instead, the team invests in an elite athlete with a bullying style in Penning to bookend Rashawn Slater for the next decade.

The Saints will count on finally having Michael Thomas (ankle) healthy in 2022, but they still need more playmakers for whoever is under center. Dotson is a three-level option that can stretch the field and brings a toughness to the position to match some of their fire on defense.

Johnson II is a powerful defensive end that will also bring added leadership to a Houston team that exceeded expectations last season. Building up the trenches could be the path to quickly becoming a divisional contender in the AFC South.

I personally have some concerns about Lloyd that are similar to Devin Bush and his struggles since entering the league, but Pittsburgh—or whichever team drafts him—can get the most out of the former Utah standout by highlighting his versatility.

A torn ACL suffered in the national championship makes the draft range more unpredictable for Williams, but his game-breaking vertical speed would be the best way to maximize the skill-position talent already on the roster. Plus, recent Crimson Tide draft picks Mac Jones and Damien Harris have been great for the Patriots.

Olave might not have the pure speed and explosiveness that the aforementioned Williams does, but he’s another deep threat that would help open up space for Hunter Renfrow and Darren Waller. A right tackle or a few areas of need on defense can also be addressed.

Green to Arizona is an easy-to-picture connection, as he can play anywhere on the offensive line for a team that will want to make things easier on Kyler Murray after a disappointing end to 2021. Especially if they end up agreeing to an extension for their quarterback, the Cardinals need to start hitting on more of their draft picks.

Dallas seems to always have a top prospect fall into their laps, and that would be the case if Linderbaum was still available here. The entire offensive line needs to get younger to allow for a smooth transition as Tyron Smith and Zack Martin get deeper into their 30s.

I wouldn’t at all be worried about McCreary’s arm length considering how he fared versus top wideouts in the SEC, and he’d give Sean McDermott’s defense a stingy option opposite Tre’Davious White. Even if Levi Wallace is re-signed, depth would be helpful versus high-flying attacks in the AFC.

A 38-inch vertical from Karlaftis III wasn’t a surprise for a player that looks like he has springs in his legs before the snap, but it could help offset any concerns about his NFL upside. Coming off a 12-sack season, Harold Landry sounds primed to end up elsewhere in free agency.

Tampa Bay also could lose a key defender in free agency (Carlton Davis), and they also have Jamel Dean and Sean Murphy-Bunting heading into the final years of their rookie contracts. Elam has the size and athleticism that the Buccaneers have targeted at cornerback.

London could go quite a bit higher than this, though teams probably would have liked for him to run a 40-yard dash last week. Still, his inside-outside versatility and underrated run-after-catch ability could be a good fit in Matt LaFleur’s offense.

I wouldn’t completely write off a running back (Breece Hall or Kenneth Walker III) after Miami missed out on Javonte Williams in 2021. If the franchise is focused on fixing the offensive line first, Raimann can slide in at either left or right tackle.

Kansas City could be a player for soon-to-be free-agent cornerback J.C. Jackson, which would be a huge get in the secondary. But basically every team in the AFC could use more pass rushers to make an impact in January, so Jackson would be a boost at defensive end.

Johnson—who started at both left guard and left tackle for Boston College­—would be a much-needed investment for Cincinnati’s offensive line. It’s also notable that he has acquitted himself very well with his play at center throughout the pre-draft process.

Hill feels like the favorite to be the second safety off the board behind Kyle Hamilton, and Detroit might be excited about the prospects of adding two big-time defenders out of Michigan. The Lions can make a quick turnaround by hitting on free agency and the draft.