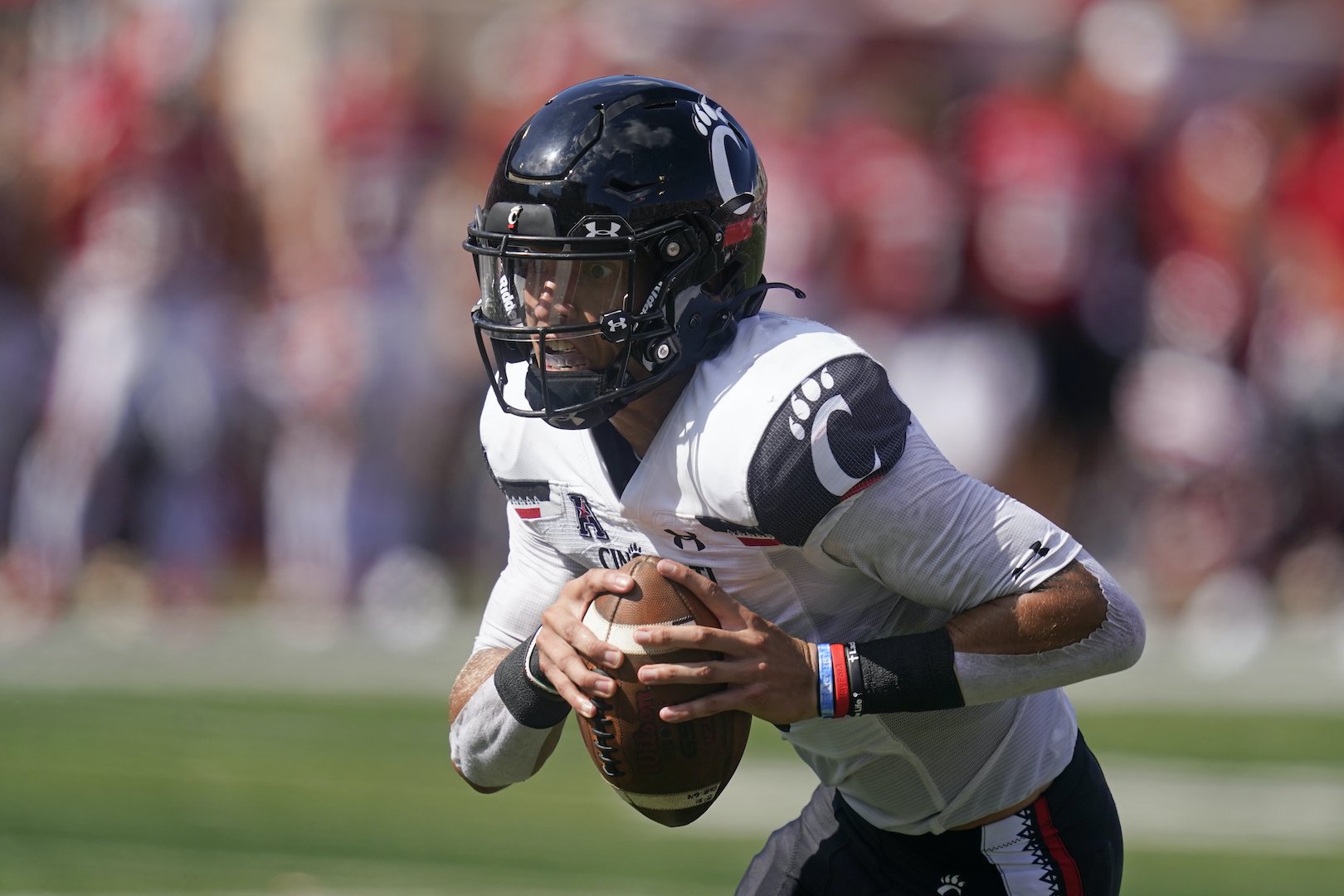 
The post-free agency mock draft predicts the first three rounds to give every fanbase at least one selection to hold them over with a little less than one month to go until the big event. I have also listed the draft hauls for each team (below the picks).

I believe it’s worth putting down a bet for Evan Neal at +1400 to be the first pick (that’s who I would undoubtedly take), but all signs seem to point to Hutchinson here. Jacksonville’s thinking would be that Hutchinson is a great complement to Josh Allen to create the NFL’s best young duo on the edge.

Detroit might want to trade down here, but the theme for every team looking to acquire 2023 first-round picks will likely be that no one will want to give one up. Instead, Walker has the knee-cap-biting style that fits well playing for Dan Campbell in the Motor City.

Although the Texans already have Laremy Tunsil on the blindside, Neal can easily slide in at right tackle after starting there for the Crimson Tide in 2020. Houston’s choice here—likely between an offensive lineman or pass rusher—could lead to a domino effect for the rest of the top ten.

Gardner was slotted here in my previous mock, and I feel strongly that he will be the pick because of his fit in Robert Saleh’s defense. The choice is probably between Gardner and an edge despite some still thinking an offensive lineman is in play.

Thibodeaux’s personality could lead to a bit of a slide, but would the Giants pass up an opportunity select the elusive star pass rusher they’ve been lacking? The duo of Thibodeaux and second-year edge Azeez Ojulari would suddenly make the position a strength.

Carolina’s decision will almost certainly come down to whether they want to get a stud left tackle (Charles Cross would be the best fit to me) or settle on a long-term answer at quarterback after striking out multiple times over the past couple of years. Pickett was recruited by Matt Rhule when he coached at Temple, and team owner David Tepper is notably a Pitt graduate and big-time booster.

This might be too much of an investment on the defensive line for New York with Leonard Williams and Dexter Lawrence, but could you imagine throwing Davis in between them? The Giants’ front in their base defense (3-4 scheme) would be reason to view them as an NFC East contender.

I keep mocking Dean in the top ten with the hopes that a team will be wise enough to take him, and Atlanta now has a hole alongside Deion Jones after Foyesade Oluokon signed with Jacksonville. The leader of Georgia’s championship defense can help quickly turn things around for the Falcons.

Seattle wants to get back to bullying opponents, and I’d bet Ekwonu is ranked very high on their board. The NC State standout would be the clear Day 1 starter at left tackle and can help open holes for Rashaad Penny and Chris Carson.

The Jets wanting a top-tier wideout is the biggest open secret in football right now, but John Schneider might not even pick up the phone if Joe Douglas calls about DK Metcalf, and A.J. Brown is a total pipe dream. Wilson and Elijah Moore would be an exciting duo for Zach Wilson to grow with.

While a slower-than-expected 40 time (4.59 at the Scouting Combine and 4.70 at his Pro Day) really hurts Hamilton’s chances of going in the top ten, Washington would be a strong landing spot for him to patrol the backend of a defense that is already set up front.

Even after re-signing Patrick Peterson, the Vikings have a need a cornerback, so Stingley Jr. would provide a significant boost to the group. I’m assuming the analytically driven front office will count on the peak performance of Stingley Jr. being something they can permanently unlock.

The character of Johnson could push him up draft boards, and he’d be a power edge to pair with Jonathan Greenard for a Houston defense/team that can go in any direction. Nick Caserio gets a prime opportunity to hit on two picks in the top 15 following the Deshaun Watson trade.

Baltimore will hope Ronnie Stanley is healthy and returns to form in 2022, but Cross doubles as an insurance policy on the blindside in addition to having the ability to immediately start at right tackle. Either way, both tackle spots need to be secured considering the pass-rush talent in the division (and conference).

Defensive tackle isn’t a significant need for the Eagles with Fletcher Cox and Javon Hargrave on the roster, but Howie Roseman always wants to bolster the trenches. Wyatt has a very impressive blend of athleticism and power on the interior.

Staying in the SEC worked for the Eagles last year by taking DeVonta Smith and Landon Dickerson with their top two picks, and that could remain a focus into the future. Elam has great size (6’1 1/2″) in addition to elite speed (4.39 40-yard dash) to start opposite Darius Slay.

Mike Williams, Keenan Allen, and Williams would create the perfect complementary trio at wide receiver, and Los Angeles could use more firepower in the loaded AFC West. The rare speed of Williams should get him drafted high despite coming off a torn ACL.

Left tackle is probably the biggest hole on the roster for New Orleans, so Penning is a clean replacement for Terron Armstead. Also, his nasty play style fits well with the aggressive defense of the Saints as they try to slug their way back into contention this year.

This is a projected trade for the Eagles to acquire DK Metcalf from the Seahawks as Philadelphia tries to fix their past mistakes—and Howie Roseman has the ammo to not get outbid. With Seattle sticking with Drew Lock (or maybe acquiring Baker Mayfield), I have them passing on a quarterback to take a local cornerback in McDuffie.

It sounds like the Steelers will stay put and let the chips fall where they may, which could result in Willis dropping into their laps if he’s a quarterback that Kevin Colbert would want to go out selecting. The dynamic, strong-armed passer can develop behind Mitchell Trubisky for at least a season.

There are a few wideouts projected to go in Round 1 that are still available, and even though his stock has seemed to dip during the pre-draft process, Burks is a fit for New England to make things easier on Mac Jones. The run-heavy offense would be more creative by designing pass plays to get the ball to Burks.

Olave to Green Bay is a popular connection, and Matt LaFleur wanting a deep threat makes it all the more likely. Aaron Rodgers uncorking some play-action shots to Olave is easy to picture.

An interior offensive lineman remains possible for the Cardinals, but Karlaftis can step in to replace Chandler Jones on the edge. Last season, a lack of pass rush down the stretch was partly to blame for Arizona collapsing down the stretch and disappointing in the playoffs.

Jerry Jones recently said he’d like to draft a lineman in the first round, so Linderbaum—if he were to fall this far—would seem to have a good chance to be selected. I’d be fine with giving Tyler Biadasz another year on the job, but Dallas won’t pass on Linderbaum if he’s the best value on the board.

Rivals trading during the draft (including division rivals) has become more common in recent years, so the Chiefs might hop up a few spots to ensure themselves of their target at wide receiver. London compares to Mike Evans and could be available late in the first round due to a slower pre-draft process coming off a broken ankle (he’s having an individual Pro Day next week).

Tennessee needs to fill a starting spot at left guard following the release of Rodger Saffold, and Green would be a home-run value at this point in the draft. It would be fun to see the holes he can open in the running game alongside Taylor Lewan.

Tampa Bay is in a very similar position to Tennessee with the last hole on their offensive line being at left guard, so Johnson is an ideal fit to start in Year 1 for the Tom Brady-led offense. I also have them taking a running back on Day 2 to pair with Leonard Fournette.

Outside linebacker is a sudden need for Green Bay with Za’Darius Smith now in Minnesota—as an injury to Rashan Gary and/or Preston Smith would be a huge blow to their defense. Mafe is excellent depth to keep the pass rush churning for a unit that is already set in the secondary.

The Chiefs are surely happy with 2021 second-rounder Nick Bolton at linebacker, but Lloyd can play alongside him to improve a run defense that allowed the second-most yards per carry in the league last season (4.8). Kansas City can remain a force in the AFC if they hit on their collection of picks from the Tyreek Hill trade.

I could see Brandon Beane having some sort of analytical thresholds that McCreary doesn’t fit because of his below-average length, but McCreary can flat out cover and brings toughness to the position. The outside duo of Tre’Davious White and McCreary with a star safety duo would be extremely stingy.

Offensive line is no longer a must-have priority for Cincinnati with the La’el Collins signing as a second wave move, so the team can go in a variety of directions in the draft. Booth Jr. would push Eli Apple for playing time and provides perimeter depth.

The Lions have also done a solid job improving the roster this offseason, and Muma paired with former first-rounder Jarrad Davis (in his return to Detroit) would give them a promising tandem at linebacker. Don’t be surprised if the franchise competes for a playoff spot with a promising draft haul in the top-heavy NFC.