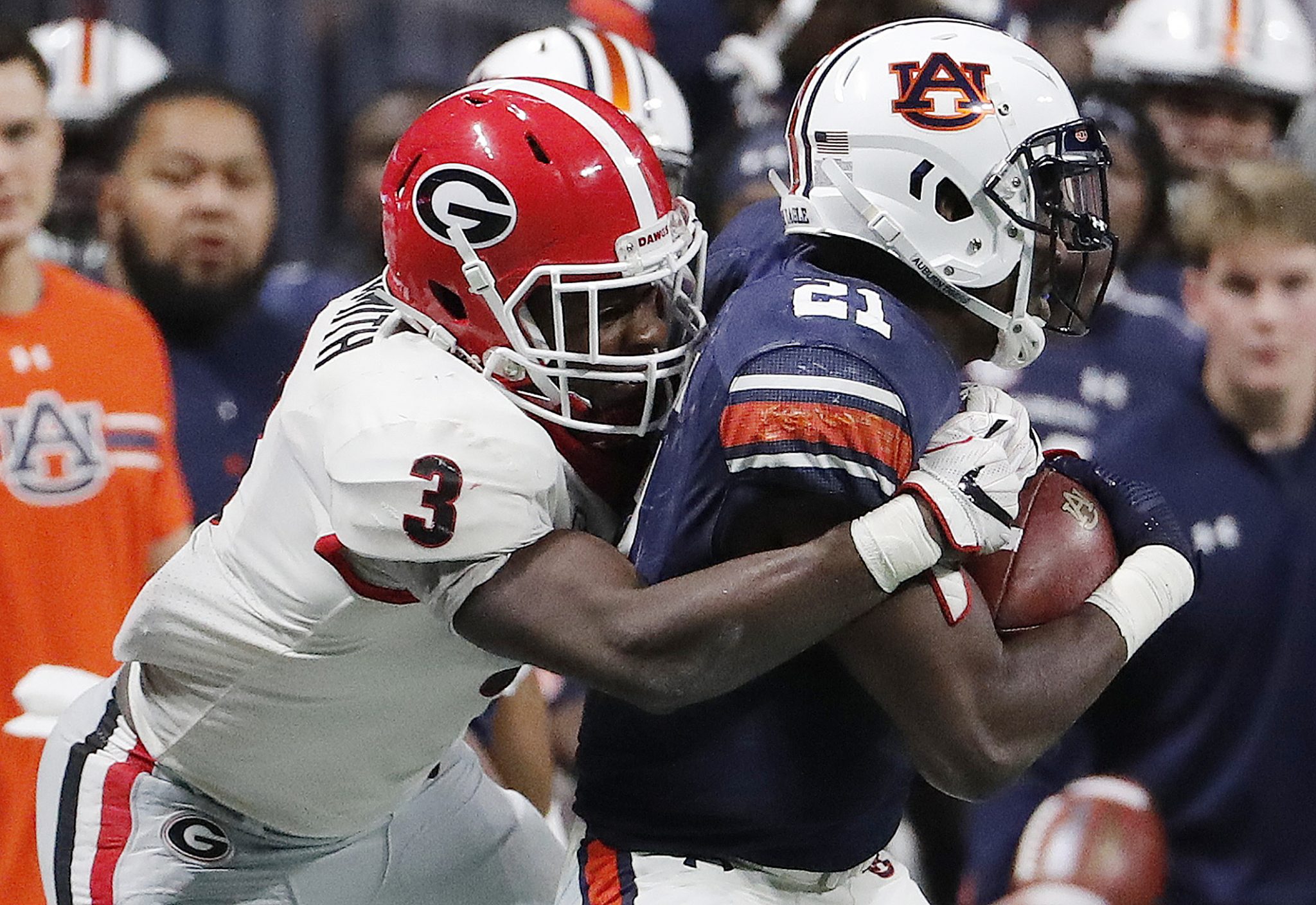 
The 2018 NFL schedule released before the 2018 NFL Draft, and we have already covered the best overall game for each week of the regular season, but rookies add a whole new dimension to the conversation. Here are the best individual player matchups when it comes to the new wave of young stars in the league.

Die-hard football fans on the east coast will find a way to stay up for a 10:20 PM ET start on Monday Night Football to conclude Week 1, and it will feature an excellent matchup between Jon Gruden’s Raiders and Sean McVay’s Rams. Los Angeles didn’t have a first- or second-round pick in the 2018 NFL Draft, but Ogbonnia Okoronwko was a potential Day 2 selection that they took in the fifth round, and he will look to prove his worth off the edge against No. 15 pick Kolton Miller to start his career.

We aren’t sure about many of these rookies starting, but Quenton Nelson is a pretty safe bet to slot in at left guard from the moment he steps on the field. And he will have a powerhouse on the other side in Week 2 when Da’Ron Payne opposes him in the trenches, so be prepared to see some bodies clashing down there when the Colts travel to Washington.

Again, it’s anyone’s guess which rookies will be starting, and that’s especially true at the quarterback position. However, more often than not over the past few years, first-round signal-callers are called into action early. If Baker Mayfield starts for the Browns and Sam Darnold starts for the Jets, we will be treated to a primetime meeting on Thursday Night Football between two quarterbacks that will undoubtedly be compared throughout their careers—especially because Mayfield backers will want to prove the Browns made the correct choice, while Mayfield deniers will say they should have went with Darnold.

Detroit will have a backfield committee this season, but Kerryon Johnson has the talent to lead it after the Lions picked him with the No. 43 pick in the 2018 NFL Draft. Leighton Vander Esch is one of three really, really good linebackers for the Cowboys so it will be interesting to see what kind of success the rookie runner has against the Boise State product in the middle of the Dallas defense.

A safety versus a center isn’t really a matchup to get excited about for casual fans, but Minkah Fitzpatrick could quickly become the leader of Miami’s defense, while Billy Price is going to be Andy Dalton’s new best friend as the anchor of the offensive line. Fitzpatrick’s all-around game—including his ability as a blitzer—will cause Price to identify potential pressure and get his guys ready to keep Dalton upright.

I think Lamar Jackson has a very bright future in the NFL, but he’s simply not going to be starting in 2018 with Joe Flacco healthy, so Baltimore is more likely to get a contribution from the player they picked ahead of Jackson—25-year-old (in August) tight end Hayden Hurst. The former minor league baseball player will probably be tasked with blocking Rashaan Evans at times, while the Alabama product should see a lot of Hurst in coverage.

College teammates Sony Michel and Roquan Smith probably had plenty of battles at practice for Georgia over the past three years, but they will strap it up for real when the Patriots travel to Soldier Field this October. Smith is the early favorite for Defensive Rookie of the Year, and he will probably need to make plays in space to stop Michel from picking up chunk yardage both as a runner and receiver.

No, running backs aren’t on the field making plays against one another, but stars at the same position are compared all the time, and the two NFC East rookies will be no different. You can bet there will be at least one side-by-side graphic for Guice and Barkley comparing their season and/or game stats in Week 8.

Derwin James surprisingly fell to the No. 17 pick last week, and the Chargers jumped at the opportunity to add him to the back end of their defense. He will be all over the place for Los Angeles, including coming up to stuff the run, which will be fun to see against first-round pick Rashaad Penny and the Seahawks. Penny was thought to be a Day 2 or early Day 3 pick, but Seattle clearly has a big plan for him, and he’s an aggressive, productive runner.

We could see Denzel Ward line up against Julio Jones in this matchup, but that might be a tall task—literally, at nearly a five-inch difference in height—for the rookie. Instead, he might oppose fellow first-rounder Calvin Ridley, who could lead the No. 4 pick to travel all over the field and would likely challenge him deep at least once or twice.

If you think the Week 2 meeting between Quenton Nelson and Da’Ron Payne is going to be a battle of monsters, wait until this one. Vita Vea (6’4”, 347 lbs.) and Will Hernandez (6’2”, 327 lbs.) are both big men with quick feet, and the Bucs and Giants have each been committed to building the lines and getting tougher this offseason, so this matchup will go a long way in determining which team has better hog mollies.

This could have also been chosen for Week 10, but the Bears and Lions play twice in three weeks, and I think most fans will be more pumped about the Thanksgiving Day meeting. Roquan Smith and Kerryon Johnson faced off in the SEC last year, with Johnson getting the better of the November matchup before Smith and Georgia took the SEC Championship, but fortunately (for people who love great football), their rivalry could go on for eight or so more years as NFC North rivals.

As I said for Lamar Jackson with Baltimore, Josh Rosen simply isn’t going to start for Arizona if Sam Bradford is healthy, so he’s not an option to face Green Bay’s new cornerback duo barring injury. However, Christian Kirk will likely see a lot of Jaire Alexander, and they were two of my favorite prospects in the 2018 NFL Draft. If the Cardinals surprise people like I think they might, this individual matchup and game could be a thriller.

Josh Allen hasn’t yet appeared on the list, but that doesn’t mean he won’t be a Week 1 starter. And by this point of the season, I would be surprised if he wasn’t under center for the Bills. People laughed about the narrative that Allen’s overall size (including his hand size) gives him the edge in wintry conditions, but he’s proven that it’s true with strong play in the cold and snow at Wyoming. Perhaps that experience will come into play when his friend Sam Darnold visits Buffalo this December in what could be a pivotal AFC matchup.

This is basically Bradley Chubb versus a lot of people—Mayfield, Nick Chubb, Austin Corbett, Denzel Ward, and the Browns front office—but his main objective in Week 15 will be sacking Baker Mayfield (or whoever is quarterbacking for Cleveland). If the first-overall pick and/or the Browns are struggling at this point, while Chubb is in contention for Defensive Rookie of the Year, there will be a lot of questions heading into this meeting.

I’m still not sure why Ronnie Harrison dropped to the end of the third round on Friday night, but even in a talented secondary, he could push for playing time sooner rather than later for Jacksonville. By Week 16, Harrison might be used to defend opposing tight ends, which will include touchdown threat Mike Gesicki, who could play on the line, in the slot, or out wide in Adam Gase’s offense.

Four of the Giants’ final five games of the season will feature Saquon Barkley against an early-round pick at linebacker: Roquan Smith (No. 8 overall), Rashaan Evans (No. 22), Darius Leonard (No. 36), and Leighton Vander Esch (No. 19). The only one that is likely going to turn into a long-term rivalry, though, is the season finale battle with Vander Esch and the Cowboys. The rangy linebacker will need to tackle Barkley running game and use his elite coverage ability against him in the passing game. And I can’t wait to see who gets the upper hand.