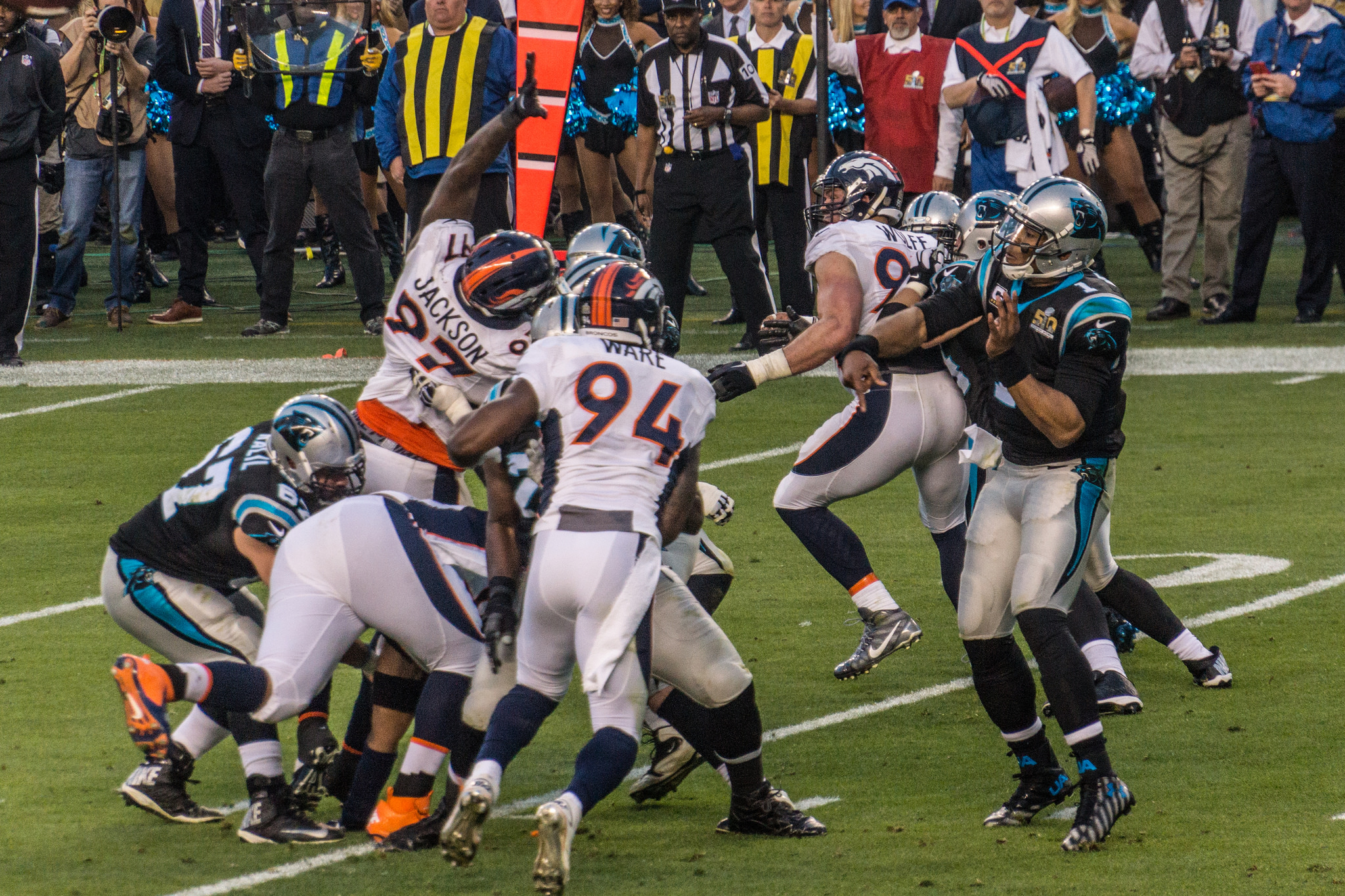 A Love Letter to DeMarcus Ware

When we tell stories about star players coming through in the big moment to lead their team to a title, we tend to focus on skill-position players; think of Dwight Clark’s incredible touchdown catch from Joe Montana that sent the 49ers to their first Super Bowl, or John Riggins’ 44-yard dagger against Miami to clinch the Lombardi Trophy, or a battered and mud-spattered John Elway leading a 98-yard comeback drive in Cleveland to send the AFC title game to overtime…or any of the other scenes of crunch time heroics that have been replayed so many times on NFL Network that they are fixed in slow motion in the mind of every football fan, complete with the trademark NFL Films lens flare in the background. There are a million examples, and you can fill in your favorites as you please; what you can’t do, though, is find a million examples of a pair of linebackers carrying their team to a championship.

And yet, two seasons ago, that’s exactly what happened. For three games in the 2015 postseason, DeMarcus Ware and Von Miller stopped being two men playing a game and turned into something more closely resembling a high-tech targeted missile system, hell-bent on ridding the world of quarterbacks forever. The pair combined for 8.5 sacks and 16 tackles as they spearheaded a phenomenal defensive effort that saw the Broncos hold three of the league’s best offenses to just 44 points combined on their way to a Super Bowl title. And while Miller got the Super Bowl MVP and the lion’s share of the stats, Ware may have had the more impactful postseason overall—particularly in Denver’s upset of the Patriots in the AFC Championship, when he spent so much time in the New England backfield that he might as well have had his mail forwarded there. Tom Brady could hardly complete a three-step drop without number 94 suddenly materializing right in his personal bubble; while Ware only finished the game with half a sack, I don’t think I’ve ever seen a single pass rusher get in a quarterback’s face as often as Ware got in Brady’s on that cloudy afternoon in Denver.

I’ve been thinking about that incredible postseason run a lot in the days since Ware officially announced his retirement from professional football. Ware’s departure isn’t exactly shocking—anyone who observed his injury-shortened final campaign in Denver last year could attest to the fact that he’s lost the explosive burst he once had coming off the line of scrimmage. Ware is no longer the force of nature he once was, and he made it through sixteen games without missing time just once in his last four seasons. While there was a brief flutter of rumours that he would return to Dallas for one more season, the timing of this move feels right—it’s always painful to watch a once-great player find out the hard way that his body has reached its breaking point, and I suspect that’s what we would have seen if Ware decided to play for another year. Now DeMarcus can go home and preserve whatever feeling remains in his extremities, and the rest of us can get down to the business of gratuitously over-analyzing his legacy—and boy, what a legacy it is.

I know that Ware will always be more associated with Dallas than Denver. After all, he spent nine of his twelve NFL seasons and collected 117 of his 138.5 career sacks in a Cowboys uniform—but for me, his legacy can be summed up by his tenure in Denver. Part of that is undoubtedly hometown bias on my part (did I mention the double-helping of turf that Denver served Tom Brady in the AFC Championship? Did we cover that already? Because I’m happy to talk about it some more—for hours, if need be), but it’s also because I think his three seasons in Denver epitomize just how valuable a player he was. For a referendum on his on-field impact, you have his devastating work in the aforementioned 2015 playoffs; for a referendum on his off-field impact, look no further that Von Miller, his partner in crime in Denver. When Denver signed Ware as a free agent in 2014, Miller was at a crossroads in his career. Coming out of Texas A&M, Miller so impressed the Broncos with his freakish athletic ability that Denver used the 2nd overall pick to select him in the 2011 draft; however, the early years of his career were marred by legal troubles, injury, drug suspension, and a sudden weight gain that caused him to lose some of his incredible speed. Coming off a frustrating 2013 season, many in Denver wondered if Miller’s seeming immaturity would keep him from ever tapping into his full potential, and questions had arisen about his passion for football (after the Broncos got blown out by Seattle in Super Bowl XLVIII, Miller drew public ire for trying to crash the Seahawks’ victory party).

Ware’s arrival put a stop to all of that. Growing up in rural Texas, Miller had watched Ware on TV every Sunday and hoped to be just like him someday. By all accounts, practicing with his childhood idol on the other side of the formation every day lit a fire under Miller—determined not to disappoint the player he looked up to most, Miller quickly got his act together, and in the process transformed from a frustrating enigma into one of the game’s most feared defenders. It wasn’t just Ware’s performance on the gridiron that helped carry Denver’s defense to the next level—it was also his ability to elevate the performance of every player around him.

Of course, there’s plenty to say about Ware’s tenure in Dallas as well, where he spent three or four years as probably the best edge rusher in football—I will leave that to other people. While Ware will rightly be remembered mostly for his achievements in blue and grey, it was during his brief time in blue and orange that I began to appreciate just what a singular player he was. Beyond the havoc he wreaked on the field, beyond the sports movie-leader archetype that he represented in the locker room, it was just impossible not to like him, and impossible not to enjoy watching him play. Every player at least pays lip service to their “love of the game”, but Ware is one of the few who never gave fans any cause to doubt his passion. He was the sort of player whose style evokes the romantic side of sports fandom—he played with elegance and grace, which is strange to say about a guy who is mostly famous for hitting quarterbacks really, really hard. If you blurred out every face and jersey number on the field, you would be able to identify Ware just by the way he moved (and of course, by his iconic sack dance).

In this Analytics Age of sports journalism, we’ve all become skeptical of the base emotions we get from watching players play, and we’ve rightly learned to turn to numbers to discern any kind of hard truth from what we see on the field. Ware certainly built an impressive statistical case for greatness, and one that will probably punch his ticket to Canton when he becomes eligible. Ware finishes his career with the 8th-most sacks in NFL history; six of the seven players ahead of him on the list—Bruce Smith, Reggie White, Kevin Greene, Chris Doleman, Michael Strahan and Jason Taylor—are in the Hall of Fame (the seventh, Julius Peppers, is still active). But I don’t think that is the best lens through which to view his greatness; I think the best thing that can be said about Ware is that watching him play reminded me of the childlike sense of wonder I felt back when I was three or four years old, spending every Sunday afternoon hunkered down in front of the TV while my father gushed about John Elway and Terrell Davis and Steve Atwater. DeMarcus Ware was the aesthetic embodiment of everything we love and romanticize about football, and he will walk away as one of the most likeable guys in the history of the sport.

Now go home and get some rest, DeMarcus. You’ve earned it.