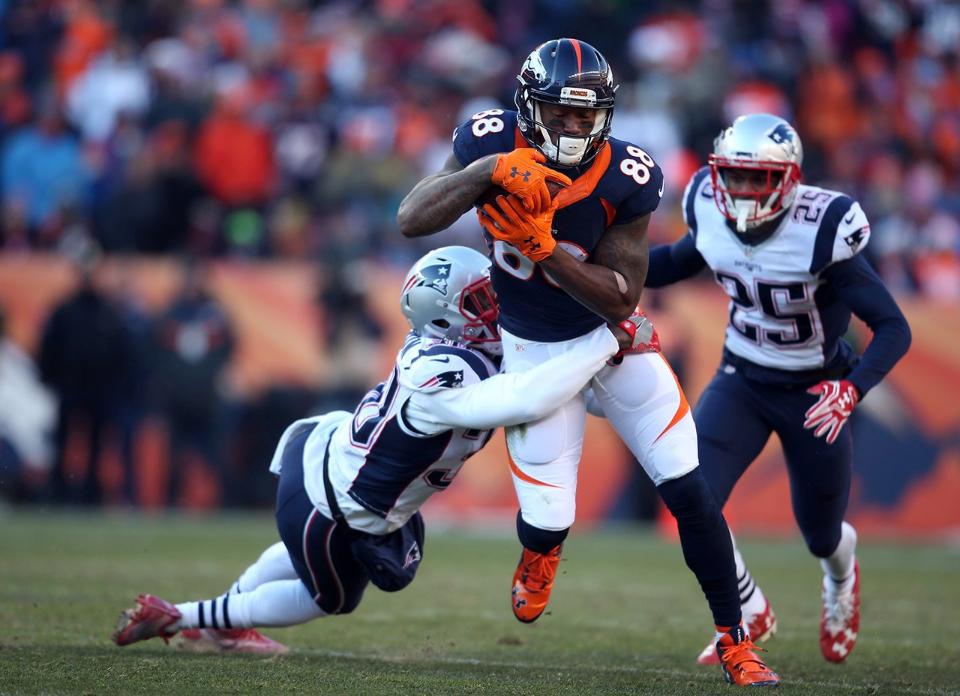 
The emotional high of a championship can bring a brutal comedown.

Eleven months after hoisting the franchise’s third Super Bowl trophy, the Denver Broncos are watching the playoffs from home while they search for a new head coach. After jumping out to a 7-3 start, they lost four of their last six—including four straight games in which their offense was held to thirteen points or fewer (Denver beat Jacksonsville 20-10 in Week 13, but that point total included a pick-six by Bradley Roby). They don’t know who will be their starting quarterback next year, or whether their offensive line will be able to protect that quarterback. By just about any measure, their 2016 season was a colossal disappointment.

So why did it all go wrong? The 2016 Broncos were, in construction, essentially a duplicate of last season’s champions; they were built to be conservative and avoid mistakes on offense while their dominant defense choked the life out of opponents. They retained nine of their eleven starters on defense, including superstars Von Miller, Chris Harris Jr., and DeMarcus Ware. Their offense was still built around the core of C.J. Anderson, Emmanuel Sanders, and Demaryius Thomas. The most obvious reason for their collapse would seem to be replacing the legendary Peyton Manning with an untested seventh-round pick at quarterback, but a comparison of their numbers in Gary Kubiak’s offense doesn’t back that up:

Those numbers are pretty similar—and Siemian actually did a much better job of limiting turnovers, which is very important for an offense that only generates about 20 points per game. And speaking of points per game, look at Denver’s point totals the past two seasons (excluding playoffs):

Denver scored 22 more points in 2015—about 3 touchdowns, or 1.4 points a game. That’s a narrow margin, and it’s even closer when you consider that Denver got 36 points off defense/special teams returns in 2015, as opposed to 26 points this season.  Strip that away, and the two offenses were within twelve points of each other. From a broad view, this looks like two remarkably similar teams that took incredibly divergent paths. So as the Broncos look ahead to an offseason filled with uncertainty, let’s look back at how and why those paths diverged.

First off, there are the variables that can’t be controlled (injuries, for example). DeMarcus Ware was a force of nature during Denver’s stretch run last season; in 2016, he missed six games due to injury and was a shell of himself when he did play, notching four sacks and just nine total tackles on the season. C.J. Anderson, the churning engine behind their running game, underwent knee surgery after Week 7 and never returned. Vance Walker was supposed to fill free-agent departure Malik Jackson’s role as a penetrating interior lineman, but he tore his ACL in camp and did not play a single down this season. Key defensive cogs T.J. Ward, Derek Wolfe, and Brandon Marshall all were sidelined during Denver’s disastrous stretch run. That’s a pretty stark contrast to Super Bowl 50, when all 22 of Denver’s nominal starters were suited up. The most impactful injury of all may have occurred in Week 4, when Trevor Siemian had to leave the Broncos’ win against Tampa Bay after going down hard on his shoulder. Siemian only missed one game, but that injury seemed to nag him as the season went on, and he never looked quite as smooth as he had in the first four games.

Siemian’s battered state can be credited to Denver’s toxic mess of an offensive line (more on them in a minute), but the rest of that extensive list comes down to mostly bad luck—and that’s not the only sense in which Denver’s luck shifted between seasons. In 2015, Denver had a stunning 11-3 record in one possession games (games decided by 8 points or fewer).  In 2016, that dropped to a more pedestrian 3-4. In close games, one or two lucky breaks can swing the outcome, and while Denver’s 2015 team was certainly built to win those games, they were bound to see some regression. In Denver’s loss to the Chiefs in November, Kansas City won the game on a field goal in the final minute of overtime that bounced off the left upright and through—another inch to the left and it would have been no good. Two weeks later in Tennessee, Bennie Fowler let a game-winning touchdown pass bounce off his chest late in the fourth quarter. A few moments like that can make or break a season.

Now the last two paragraphs might make it seem to let the Broncos off the hook for their failures this season, but there’s plenty of blame to go around on the team as well—and the biggest share of it belongs to Denver’s offensive line. That unit was a mess in Denver’s Super Bowl run, enough so that John Elway jettisoned three of their five starting lineman and handed out free agency deals to two new tackles, Donald Stephenson and Russell Okung. Those moves made sense at the time, but it’s fair to say that they didn’t pan out the way the Broncos hoped. Okung had an uneven first year in Denver in which he committed far too many penalties, and Stephenson was even worse. The right tackle position was a dumpster fire all season as Stephenson, Ty Sambrailo, and Michael Schofield took turns whiffing on run blocking assignments and desperately chasing edge rushers. The cumulative effect of their struggles was that Trevor Siemian spent most of his time on the field running for his life in the pocket, and the play action passes that the Gary Kubiak offense is built on were routinely blown up by a free rusher in the backfield. Of course, Denver managed to overcome a lot of those same issues last season, but that was largely because running backs C.J. Anderson and Ronnie Hillman were good at producing big plays in the running game. Hillman departed in the offseason, and Anderson’s Week 7 injury sapped the Broncos run game of its remaining effectiveness. In nine different games this season, the Broncos failed to top 90 yards rushing.  When the ground attack fell apart, it put the onus on Trevor Siemian to win games—and it gave opposing pass rushers free rein to have their way with Denver’s overmatched pass protection. It is not easy to win games with subpar pass protection in a division that includes Khalil Mack, Justin Houston, and Joey Bosa.

The defense developed some issues as well, particularly as the season went along. While Denver’s pass defense continued to lap the league, the loss of Malik Jackson and Danny Trevathan (along with the aforementioned injuries) significantly weakened their ability to stop the run; the Broncos fell all the way to 28th in the league in rushing yards allowed after finishing third in that category in 2015. Von Miller and the No-Fly Zone still gave quarterbacks fits, but they couldn’t influence the course of games in the same way because their opponents simply didn’t have to throw the ball as often. Denver lived and died on the performance of their rush defense, allowing an average of 112.1 rush yards per game in their victories, compared to 153.7 yards in their defeats.

This was really just a disjointed season for the defending Super Bowl champions. Gary Kubiak was hospitalized after Week 5 and missed the subsequent game, a loss to the Chargers. A few weeks later, defensive coordinator Wade Phillips was laid flat by an accidental hit on the sidelines, and had to be taken to the hospital. There were signs of locker room disharmony all season—early on, wide receivers Emmanuel Sanders and Demaryius Thomas publicly aired concerns that they were underused in Denver’s offense, and Denver’s loss to New England reportedly erupted into a postgame shouting match between members of the defense and the offensive line. Now that Denver’s title defense and Gary Kubiak’s coaching tenure have come to an abrupt conclusion, Broncos fans have to be wondering if Denver can solve its myriad issues before the championship window for their once-in-a-lifetime defense closes.

The search for solutions will start at the head coaching position. Falcons offensive coordinator Kyle Shanahan would seem to be an obvious fit—he has strong connections to the Denver community by way of his Super Bowl-winning father, and he runs a similar offensive scheme to Kubiak (whom he worked for as an offensive coordinator in Houston). That offensive continuity would be good for the development for presumed quarterback of the future Paxton Lynch, who has already spent a season learning the complexities of the West Coast offense after never playing in a pro-style system in college. Denver could also pursue Dolphins defensive coordinator Vance Joseph, who they interviewed in 2015 before hiring Kubiak. Whoever gets the job will have a difficult decision to make at quarterback—should Denver stick with the more polished Trevor Siemian as the guy who can win them games right now, or put Paxton Lynch on the field quickly so they can get through his growing pains phase as soon as possible? Or will John Elway go all-in for a title run and bring in a veteran quarterback (maybe a certain Texas resident whose name rhymes with Flony Flomo)?

Don’t count Denver out of the championship hunt in 2017—with a defense this good, anything is possible. But 2016 sure hurt, and it exposed all the different ways that a well-built team can still manage to have subpar years. And with a core of talent this good, the Broncos can’t afford to sit on their hands and hope that these issues work themselves out. This team has been to the peak, and they know that the view up there is unbeatable.

Now they know how hard it is to make it back again.