WOLF SPORTS ALERT There may be temporary bugs due to site performance upgrades. Thank you for your patience!
Home / frontnfl / Alabama’s Mac Jones Is Worth A High Pick In The 2021 NFL Draft 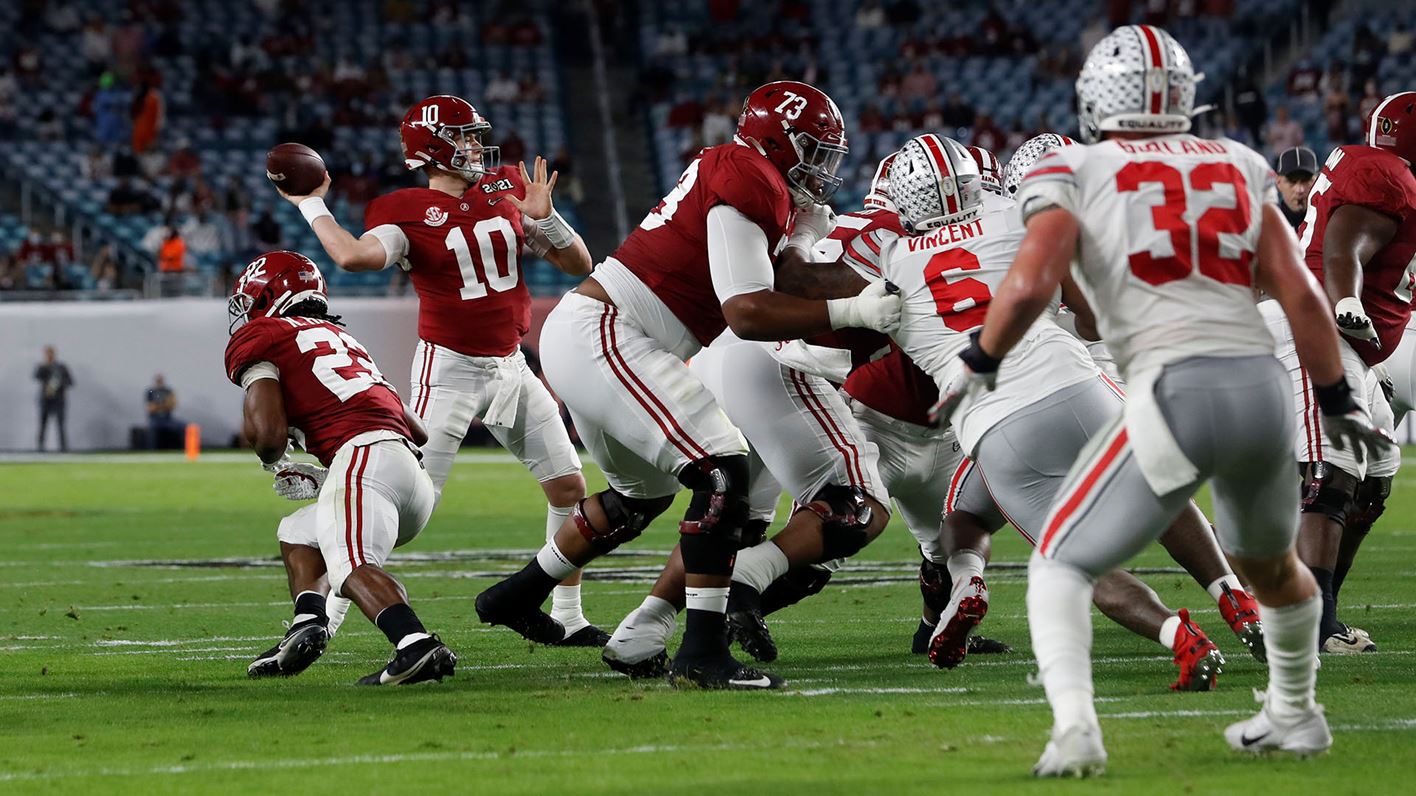 
Every year, especially online and within the media, there are polarizing NFL draft prospects. This year, that person is clearly Alabama quarterback Mac Jones. Right when the 49ers traded up to the No. 3 pick in the draft with the apparent intention of taking Jones, many started questioning the decision while piling on Jones’ skill level. I believe those critics are wrong and that Jones is a worthy selection in the top ten of a draft. I’ll be showing some of what makes Jones a signal caller to get excited about, and why he can have a lot of success at the next level, particularly in a good situation with Kyle Shanahan in San Francisco. You can also read a full scouting report on Jones here.

The biggest thing that stands out for me when watching Jones is his superb deep ball. He doesn’t have a total rocket arm that will allow him to launch the ball quite as far as the other top quarterback prospects in this year’s draft, but what he lacks in arm strength, he makes up for with precision, timing, and touch.

Jones throws the deep ball perfectly on the outside shoulder against deep coverage when there’s a deep middle safety. It helps having someone as fast as Jaylen Waddle to go get it, but this ball could not have been handed to him any better while throwing it to the outside shoulder. This came on a play where Waddle was lined up in the slot, so Jones arguably had less margin for error on where he put the ball. Perhaps the safety should have been playing deeper even this deep in scoring territory, but you can see at the end of the clip he would have had a chance to make the play if not for Jones putting the pass on the money.

But when Jones knows there’s no free safety roaming in middle of the field, he’ll throw it on the inside a bit where is receivers can easily catch up while leaving defenders in the dust.

This may look like a lack of arm strength to some, but when the middle of the field is wide open, it can be easier for receivers when the throw guides them to the post in stride instead of an over-the-shoulder grab. Jones sees the deep part of the field well and knows how and when to adjust his long throws, making things easier on his targets.

Overall, Jones just has the natural touch and feel on the deep ball in particular, which personally gets me excited because I’m a big fan of bomb touchdown connections.

The excellent ball placement from Jones is not just limited to the deep areas of the field, as he places the ball in the correct spot for his targets to both run after the catch and not get lit up by defenders. No matter how talented the supporting cast is, you don’t complete 77.4% of your passes without great ball placement and accuracy.

The RPO (run-pass option) game was an integral part of the Crimson Tide offense, and ball placement is very important to make it work at a high level.

Also, note the quick release Jones has. It’s a great delivery, and getting the ball out quick is huge in the NFL.

Jones’ teammates loved having him as their quarterback (both DeVonta Smith and Jaylen Waddle said without hesitation they preferred Jones to Tua Tagovailoa), and it probably starts with the way he puts the ball on them so that they can do damage with they get it in their hands.

But the ball placement also comes into play on the red zone. Even against tight coverage, Jones puts the ball in a spot that allows his guys to go up and make plays and score touchdowns.

That second play by Smith is just insane, but he’d probably be the first to tell you it was only possible because Jones gave him an opportunity and put it to a spot where only he could catch it. Jones was unafraid to test future top NFL cornerback prospect Derek Stingley Jr.

Jones actually has very underrated athleticism (his 4.7 40-yard dash was surprising to just about everyone) and can scramble for yardage when there’s an opening, but it’s with his functional athleticism within the pocket where he really shines.

Jones feels the pressure coming from behind, keeps two hands on the ball, climbs the pocket, keeps his eyes down the field, and makes the throw.

While Jones often had a clean pocket, he also showed toughness and a willingness to stand in there and take a hit to make a throw down the field. Here, he’s crushed by a free blitzer against Missouri but is unfazed:

That poise (and underrated athleticism) comes into play when Jones is outside of the pocket, too. Here are a couple of examples where he gets closer to the boundary—on a broken play where he scans the field and works back to DeVonta Smith, and on a designed rollout—and throws pinpoint passes for touchdowns:

Accuracy might be the most important trait for a quarterback (as many argue), but decision making is obviously right up there in terms of importance. Jones makes good decisions with the ball, and as a coach you really shouldn’t have to worry too much about him turning it over. Jones threw just three interceptions when being thrust into action in 2019, and he cut down that rate even further as the full-time starter in 2020, throwing just four picks compared to 41 touchdowns. Especially if there’s a strong roster around him (which is the objective if you’re building a team), you can probably count on Jones not losing games for you—and, despite the strange media narrative to the contrary, he can be a key part of an NFL team winning and winning big.

NFL is a bigger challenge than college football, but Jones already showed he can win big at Alabama. Having nothing handed to him and working his way up to becoming a national champion and star quarterback for the top program in the country is a massive accomplishment.

His only loss at Alabama was a 48-45 defeat in the Iron Bowl in 2019 (played at Auburn). Jones threw two pick-sixes in that game, but he learned from it and came back to have an outstanding final season, bouncing back to light up Auburn in the rematch (for an Iron Bowl record five touchdowns) and eventually throwing nine touchdowns in the College Football Playoff while completing 80%+ of his passes in both games. 2020 No. 1 overall pick Joe Burrow—held in extremely high regard by almost everyone last spring—might have looked smoother while he did it, but it’s interesting that Jones isn’t getting similar sentiment as a prospect after a similar final college season. (And keep in mind that Jones had another year of eligibility and might have had an even better year with more experience if he returned to Alabama for 2021.)

Jones had immense talent around him, but it looked like he was playing flag football at times last year—and his own ability had a hand in that. There’s a lot of talk about how he’s not talented enough, but some of the best young quarterbacks give the feeling that they’re playing flag football (particularly Josh Allen and Patrick Mahomes), and Mac Jones does the same, albeit in a different manner as more of a pocket passer than someone that’ll run around and make plays. Jones’ skill as an accurate passer and with the deep ball helped the playmakers around him and gave Bama’s offense that flag football feel. And remember, Jaylen Waddle was out for a lot of last season due to an ankle injury, and the offense still lit it up thanks in large part to Jones’ play.

I don’t rank Mac Jones as an unquestioned elite quarterback prospect that should be the first pick in most drafts, but he’s clearly very, very good. One thing I’m most concerned about for Jones is that he has had a John McEnroe-like streak (Nick Saban used to call him that), which might not be good for a professional quarterback when things go south in the NFL. But the positives overwhelmingly outweigh the only potential notable negative I’m concerned about (and Jones has seemingly matured and grown out of that stage).

Overall, while his game might not be in vogue with so many electrifying athletes at the quarterback position today, Jones can have a ton of success as a pocket passer in the NFL and is worth the No. 3 pick. Don’t be surprised if he’s the latest young man to make the relentless critics look like fools in a few years.