Home / frontnfl / Alex Smith Continues To Rise Toward The Top 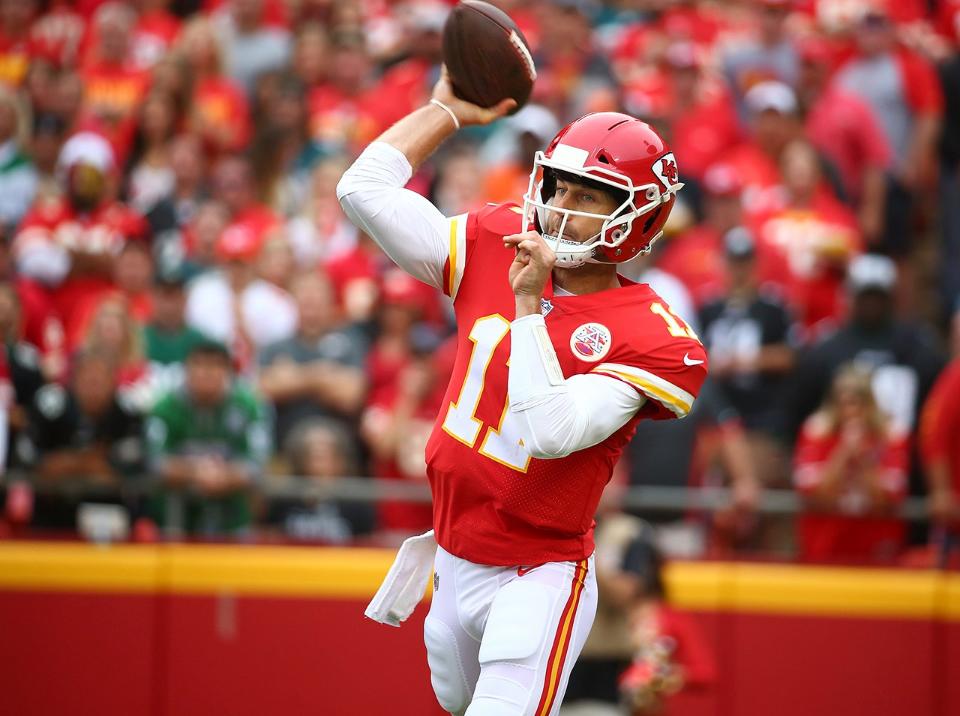 Alex Smith Continues To Rise Toward The Top


Alex Smith is an NFL enigma. The first pick of the 2005 NFL draft has divided experts and analysts alike—while some rave at his playing ability, most of the commentary around Alex Smith over the years has been unfavorable.

Smith was drafted first overall by the San Francisco 49ers in 2005, after head coach Mike Nolan made a gutsy decision in drafting Alex Smith over popular choice Aaron Rodgers. In all regards, that is a tough standard to live by. Aaron Rodgers, who many argue over a decade later is the the greatest quarterback talent ever, has clearly outplayed Smith, winning a Super Bowl and a couple of league MVPs. While most of Alex Smith’s criticism comes from the poor start to his career, it’s evident that the expectation was for him to align to greats like Peyton Manning and John Elway rather than busts like JaMarcus Russell or Tim Couch, and to definitely outperform Rodgers—who went 24th overall in the draft.

Smith’s early career was mediocre at best, as interceptions and inaccuracy hurt him and his team. Yet, it’s important to look at the bigger picture. Smith had four offensive coordinators his first four seasons, lacked weapons early in his career, and missed time with injuries. Having no consistency in schemes and no viable offensive threats, the 49ers struggled through some mediocre years until Jim Harbaugh arrived for the 2011 season, giving Smith and company some consistency and talent while helping Smith show he was an NFL caliber QB. Smith posted a 13-3 record as a starter, leading the Niners to the NFC Championship game that season first season with Harbaugh. While the quarterback was on track for career numbers in 2012 before a concussion sidelined him, then-rising star Colin Kaepernick stepped in place and remained the starter despite Smith returning to full health the following game.

However, Smith has shown his true potential with the Chiefs. He has three 11-win seasons with the Chiefs, leading them to a divisional crown in 2016. The veteran signal-caller has brought consistency to a Kansas City franchise that had been reeling with poor quarterback play since Trent Green’s departure in 2006. The Andy Reid-Alex Smith tandem has shown to be strong and still growing, as Smith’s completion percentage has steadily increased as well as his quarterback rating and yardage.

It’s easy to dismiss Alex Smith as a game-manager and cap the Chiefs inability to proceed further in the playoffs due to his game style. However, it’s important to note on the style of play the Chiefs are built to play. The lack of wide receiver threat has plagued the Chiefs, with them famously not having a touchdown from a receiver in almost two years. Outside of Jeremy Maclin when he signed with the team, the wide receiver position was depleted until the emergence of Tyreek Hill late last season. Travis Kelce and now Kareem Hunt have allowed the Chiefs to open up their playbook for big play throws, play action, and misdirections. This season has been a clear indication of that through two games

Smith has already thrown five touchdowns while throwing no interceptions despite turning into more into a gunslinger, throwing more deep passes than ever. While the presence of talented first-round rookie Pat Mahomes is pressuring Smith, he has clearly built confidence with this offense with what may be his most talented team. Hunt has proven in two games thus far that he can control the line of scrimmage and keep the defense wary of his play; Kelce is Smith’s favorite target and has continued to emerge in big situations; the dynamic Hill has grown as a receiver and route runner; and Chris Conley is rising in the receiving corps to help offset the loss of Jeremy Maclin, giving the Chiefs more playmakers. The coaching staff has done well with providing Smith an arsenal of creative plays and motions to get favorable mismatches.

The Chiefs should pause on transitioning to Mahomes. Alex Smith doesn’t look ready to give up his throne, and neither should he.