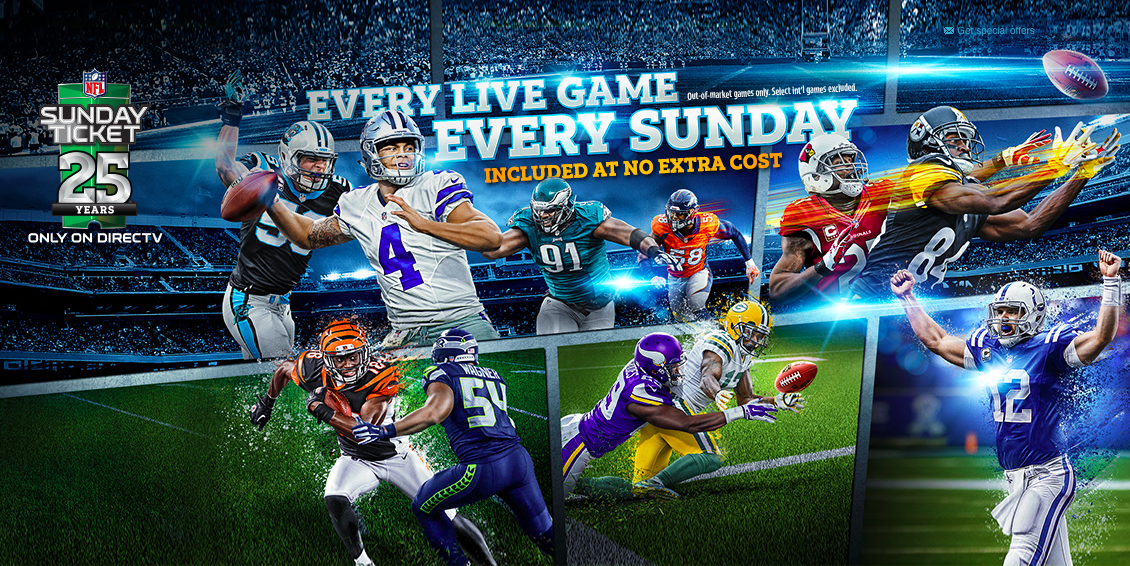 
Over-the-top media streaming company DAZN has made their intentions known: They are interested in the NFL, and specifically, Sunday Ticket. DAZN billionaire backer Len Blavatnik told Bloomberg that the company is eyeing NFL rights to boost their streaming platform. DAZN would likely have to strongly out-bid other potential interested companies, as they are less established and have received common complaints about streaming quality—the NFL wants to reach as many people as possible with quality, reliable broadcasts.

For those that are unaware, Sunday Ticket shows every non-primetime out-of-market game every Sunday during the regular season (so all London games, 1:00 PM ET games, and late-afternoon ET games that are not available on local networks). Fall and early-winter Sundays in the United States are ruled by the NFL, so virtually every big media company should look to be getting a large bit of the action via Sunday Ticket. Putting DAZN’s interest aside, in order, these are the companies I believe would be the best for Sunday Ticket, which can become available after the 2019 season if the NFL opts out of their current deal with AT&T.

AT&T has a 25-year partnership with the NFL to show nearly every football broadcast on Sunday, so it makes sense to stick with the existing relationship and keep things going. DIRECTV NFL Sunday Ticket is around $300 per season in addition to the monthly cost for the satellite service, but at least you know the company knows what it’s doing with over two decades of experience with Sunday Ticket. DIRECTV customer service isn’t perfect, but Sunday Ticket runs smoothly if everything is locked in subscription-wise.

For consumers, I think Amazon Prime would undoubtedly be the best option for Sunday Ticket—assuming the live streaming of every game is as close to live as possible and not a few minutes behind like streams can be, which might not be possible. Amazon has the partnership with the NFL after recently getting into the Thursday Night Football stream; and while I personally haven’t watched a game through Prime, it’s said to be exceptional video quality. Sunday Ticket would presumably be a part of a Prime membership, which is just $119 per year ($59 per year for students), so that would be impossible to beat with all the additional content you get with a membership. And an area that Amazon certainly does not lack in is customer service, which is a major bonus to ensure no time is missed of the limited Sundays of football during the year.

Comcast Corporation is flush with cash, and you can bet they will be looking to swipe Sunday Ticket away from DIRECTV if the NFL puts it up for bidding. Xfinity is the largest cable provider in the United States, and their broadcasts are live all the time, while streaming can be minutes behind. However, because of video compression, the quality is not as good as DIRECTV feeds or Amazon Prime streaming—the difference isn’t huge, but it can be noticeable if you pay close enough attention. Xfinity customer service isn’t perfect either, but it’s probably gotten better recently.

I think Amazon is a more likely streaming partner for the NFL than Facebook because of the Prime-TNF relationship, but Mark Zuckerberg’s company should not be counted out. The NFL is good business, and Facebook has shown interest in live sports with exclusive MLB streams. We could see a lot of change in how consumers watch sports in the next few years, and Facebook can probably be at the forefront of that if they think it’s smart business.

ESPN+ (the OTT streaming service from ESPN), Fox Sports, CBS, and NBC—the four NFL cable broadcast companies—would all likely explore the practicality of winning the rights to stream all the Sunday NFL games during the regular season. ESPN+ is probably the most likely because they don’t have any Sunday games, and they have over 2 million subscribers, which is probably around the number of current Sunday Ticket subscribers for DIRECTV (though that information is not public). I also would not count out Netflix, as they also have the cash and might need some type of boost with upcoming competitors set to challenge them.