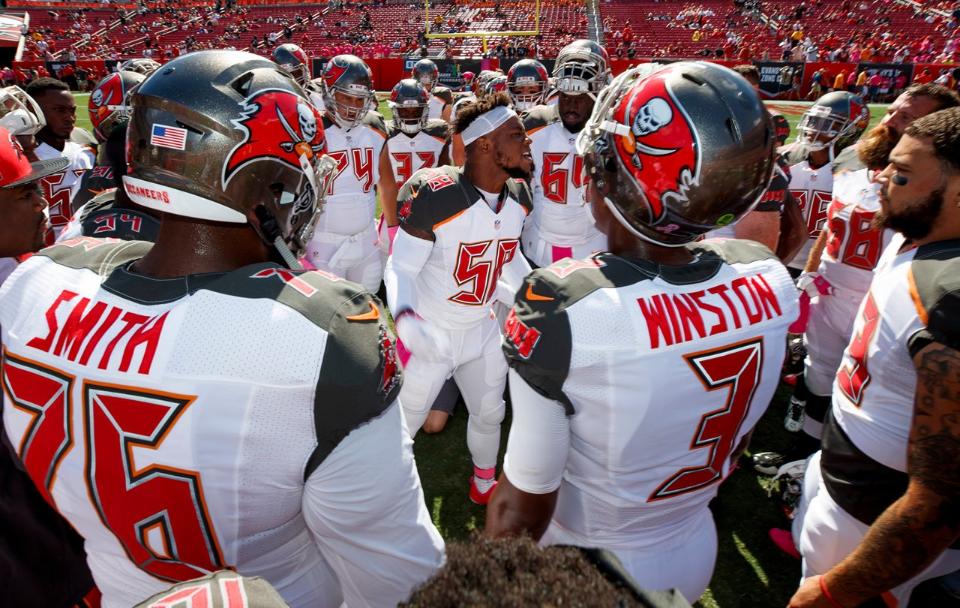 
Word has been that the Tampa Bay Buccaneers are the favorites to appear on this season of HBO’s Hard Knocks. Adam Schefter is saying the decision could come soon. While Tampa Bay might be the favorite, things can change, including teams possibly stepping up and volunteering for the show (not likely).

The Bears, Browns, Buccaneers, Colts, Eagles, Ravens, Saints, and Titans all can be hand-picked by the NFL to appear on the show because: they don’t have a new coach, haven’t made the playoffs in the last two seasons, and haven’t appeared on the show (in the last ten seasons). Let’s go through the three teams that I believe would be most interesting on Hard Knocks, along with some thoughts on the other teams eligible.

We’ll start with the presumed favorite. Their young quarterback Jameis Winston would probably be the star of the show. He brings a ton of energy and passion and while he showed he can be very immature at times during his college career, now he seems to have the immaturity reined in and can be a pretty hilarious guy. It would be interesting to see how Winston and new addition DeSean Jackson click on and off the field.

The Bucs’ defense is also a group with a lot of potential—players like Gerald McCoy, Lavonte David, and Vernon Hargreaves would assure this isn’t a boring group on that side of the ball. From a fantasy perspective, running back Doug Martin would be someone to watch. He’s suspended for the first four games of the season, but if he looks to be in great shape, he could be a steal late in fantasy drafts.

A lot of people are high on the Eagles. The team added to the receiving group with Alshon Jeffery and Torrey Smith, and they suddenly have a very deep corps. A big reason people are high on the Eagles is the quarterback, Carson Wentz. Obviously, the jury is still out on Wentz after one season, so it would be cool to see his development during training camp. Also, Wentz has a photographic memory, so we’d get great insight on how smart he is.

Philadelphia is almost certain to add a running back in the upcoming draft, perhaps even in the first round. With a potential new running back, along with the new receiver additions, we’d get to see how it pans out.

There are some high potential teams on the list of teams that can be drafted to appear on Hard Knocks, but I think the Titans might have the highest upside of all of them. Marcus Mariota is recovering from a fractured fibula, but he is continuously progressing into a great quarterback. Winston and Wentz look like they can become top quarterbacks in the NFL, but I believe Mariota has the best chance to get up there with guys like Tom Brady and Aaron Rodgers.

The Titans also have a two-headed monster backfield with DeMarco Murray and Derrick Henry. Murray is still the workhorse, but it’d be nice to see how he mentors Henry to help him eventually take over as the workhorse himself. With plenty of picks, including two first round picks in the draft, the Titans will probably be able to add another weapon for Mariota on offense.

Obviously, it’d be nice to watch Drew Brees, Sean Payton, and company work up close, but overall, I’d just like some of these newer faces on Hard Knocks.

With new GM Chris Ballard taking control, the Colts are headed in the right direction. It’d be cool to see Vontae Davis back on the show.

Like with the Saints, I feel like I know this team better than some of the others because they’ve made deep playoff runs and won a Super Bowl. The running back situation would be one to watch if Baltimore happened to be chosen.

I’d like to get a look at second-year quarterback Cody Kessler, and perhaps an inside look on what is going on with former All-Pro receiver Josh Gordon.

Mike Glennon will have a prime opportunity to be the Bears’ quarterback of the future this season. I’d rather the Bears not be on Hard Knocks so Glennon doesn’t need to worry about any extra distraction (and they would probably be the most boring team on the list, honestly).