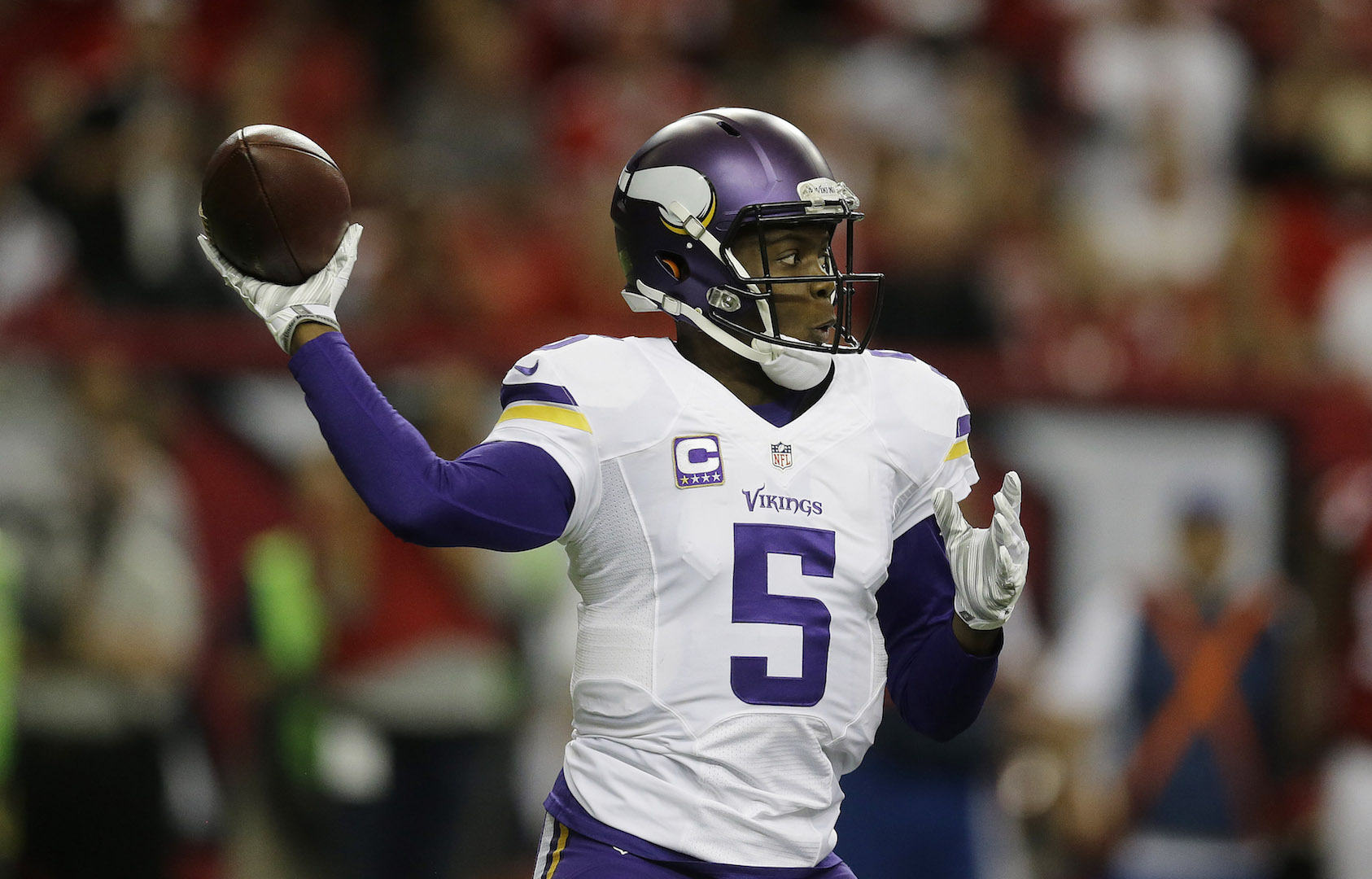 
The Toronto Wolves made 28 picks in the NFL expansion draft to build the foundation of the team, so now, they head into free agency with this roster:

If you missed Part I (City, Branding, Staff) or Part II (The Expansion Draft) of the series, check them out to see how we got to this point. The rules are simple for free agency, as we are free to sign anyone and will either a) offer more money for players that signed elsewhere in real life, or b) offer a similar amount for players that signed for a discount elsewhere, which you will see at quarterback. Also, this is supposed to be realistic as possible, so for example, we aren’t signing Sam Bradford because the offensive line isn’t good enough to keep him healthy, and Kirk Cousins wouldn’t be an option because the Wolves aren’t ready to win like the Vikings.

Health played a part in the market, but the Jets absolutely stole Teddy Bridgewater on a one-year deal worth $6,000,000. We have the hindsight of knowing that he’s looked great in camp, but I would have targeted the former first-round pick anyway, as Teddy B is just 25 and could be the Wolves’ franchise quarterback. Also, it helps that he has experience playing in the cold, but this deal wouldn’t preclude us from drafting a rookie.

New York also got a steal with Thomas Rawls in my opinion, but he’s a crowded backfield. With an expansion team, Rawls would either start (if we don’t draft anyone) or operate as the clear change-of-pace option to help rebuild his value before hitting free agency again in 2019. Plus, he will bring a ton of positive energy both on the field and in the locker room.

We already acquired deep threat Ted Ginn in the expansion draft, but going after John Brown was too good an opportunity to pass up. “Smokey” is a dynamic talent that can take the top off the defense or do damage after the catch on underneath routes. I think he’s a perfect compliment to Jordy Nelson in Chip Kelly’s offense, and it certainly makes sense to target players coming off an injury as we’ve done with the first three signings.

I was surprised that Cameron Fleming had to settle for a probable reserve role with the Cowboys earlier this year, but another NFL team being added to the mix changes that. The former Patriot doesn’t turn 26 until September, and he would start immediately at right tackle for Toronto. It also helps that he was an Aeronautics & Astronautics major at Stanford, which should make Kelly’s playbook easy to learn.

Jacksonville’s starting left guard in 2017, Patrick Omameh signed with the Giants on a three-year, $15-million deal earlier this year, but we can assure him of a starting spot and give him a little more money for our expansion team. Omameh has experience at right guard, too, so he could easily revert to a valuable backup role in 2019 or 2020.

I wanted to get one of the top free agent centers, but they were all seeking (and ended up receiving) long-term deals. Still, we add another upgrade with starting experience up front, as Travis Swanson has started 37 games over the past three seasons for Detroit. I think the offensive line is significantly better than it was after the expansion draft with decent starters and quality depth.

In real life, Connor Barwin was just recently signed, but the Wolves would make a move early and get the veteran on a one-year deal. The veteran wasn’t great in his lone season with the Rams, but he is a leader that has started 109 games since 2011. And he has experience playing under Chip Kelly from 2013-2015 in Philadelphia.

Another former Chip Kelly player, Bennie Logan began his career as a force in the middle of the Eagles’ 3-4 scheme. The 28-year-old was one of the best overall free agents available this year in my opinion, and he will prove it by boosting Tennessee’s run defense just as he would for an expansion team. This signing also allows us to develop Elijah Qualls instead of throwing him into the fire as a full-time player.

He only started one game last year and was allowed to walk in free agency when the Vikings signed Sheldon Richardson, but Shamar Stephen was a 16-game starter in 2016 and could thrive moving to defensive end in a 3-4 alignment. Also, like I noted with Bridgewater and some players in the expansion draft, Stephen is used to the cold after playing for Connecticut in college.

Maxwell’s time with the Eagles didn’t start great in a Monday Night Football loss to Julio Jones and the Falcons, but he wasn’t the first to get burnt by Julio, and he certainly won’t be the last. After that, he was an elite cornerback for Chip Kelly, and he followed it up with a strong season in Miami two years ago and then back in Seattle last season. I think he might have one or two more years as a very good boundary corner that can force turnovers.

The biggest hole on the roster is clearly free safety, as there weren’t really any to get in the expansion draft, and the free agents are thin, too. Hopefully veteran and now Super Bowl champion Corey Graham can fill the void for at least one season if we are unable to find an option in the 2018 NFL Draft, but he would be much better as a No. 3 or No. 4 guy.

Ending our spending spree in free agency, Marcus Gilchrist has the versatility to play either strong safety or free safety, but I like him best a physical presence for the back end of the defense. The Clemson product had nine interceptions and five forced fumbles in 74 starts over the past five seasons with the Chargers, Jets, and Texans.

Our series will conclude tomorrow with the 2018 NFL Draft and an overall recap of the Toronto Wolves.