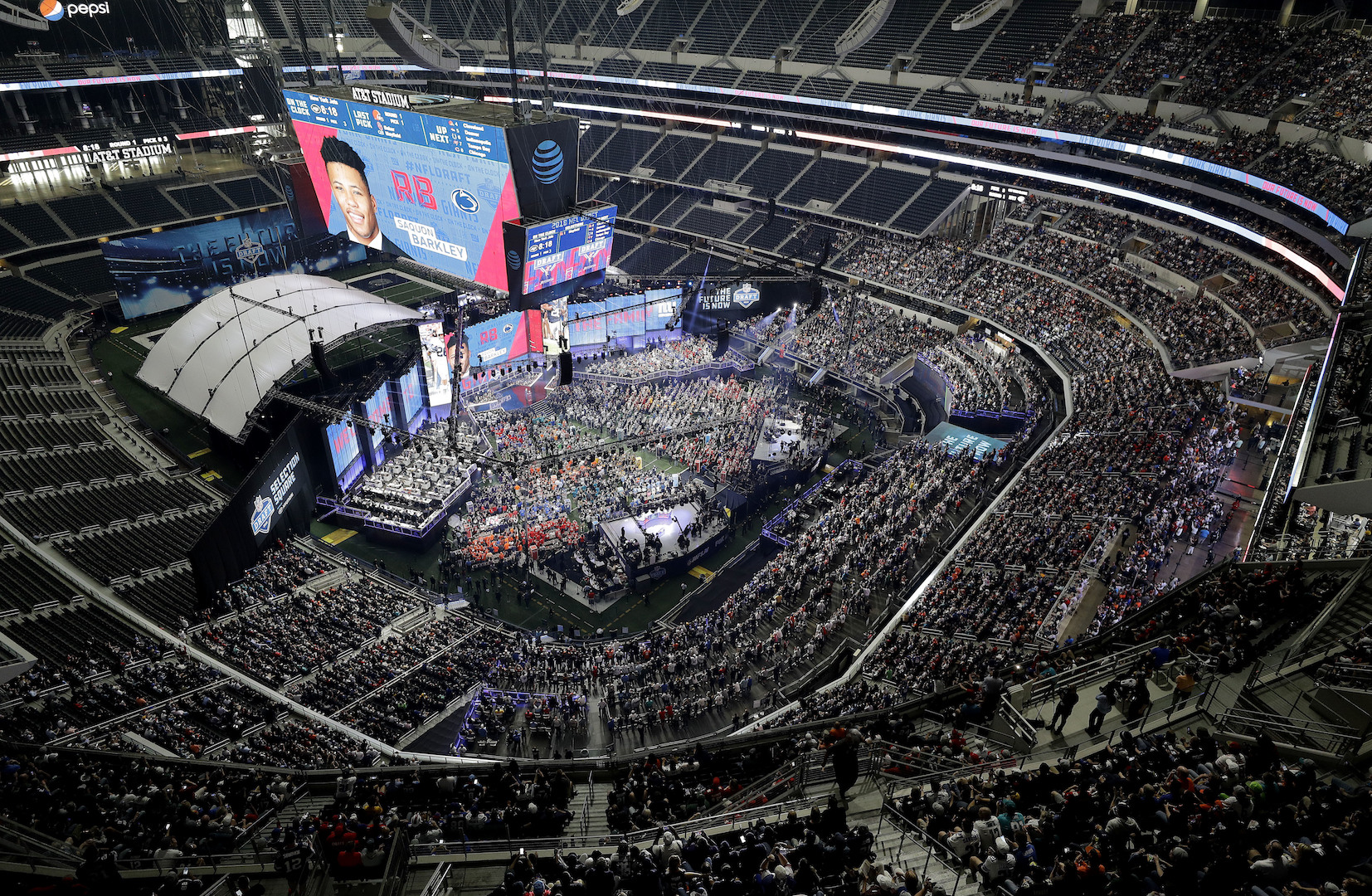 
Our “Building An NFL Expansion Team” series concludes today with the 2018 NFL Draft and an overall recap of the team. If you missed Part I (City, Branding, Staff), Part II (The Expansion Draft), or Part III (Free Agency), I suggest you check them out to see how we got to this point for the Toronto Wolves franchise:

I knew from the start of this expansion team that we would be getting Saquon Barkley, as he is arguably the greatest running back prospect of all-time and the perfect fit as Chip Kelly’s offensive centerpiece. Both as a player and as a person, Saquon is a franchise-altering talent that will set the tone in the building with legendary work ethic, and there’s no better face of the franchise. For what it’s worth, Josh Allen would have been the pick here if we went quarterback, but Barkley is the best overall prospect in recent memory.

When Odell Beckham Jr. was lighting the league on fire as a rookie, Chip Kelly revealed that he thought OBJ was “the best [receiver] in the draft”, and said he was “athletic”, “sudden”, “has outstanding hands”, and “shows it not only as a receiver but as a returner.” Well, Kelly gets his chance at a similar talent here, as Christian Kirk is an explosive receiver that I compared to Beckham in the pre-draft process. And while he might not be as naturally gifted, Kirk makes up for it with unteachable toughness.

Speaking of comparisons, Lorenzo Carter has Jason Taylor-like upside in a rangy, six-foot-six frame with 4.50 speed. He will provide a huge boost to the pass rush as a nightmare off the edge, but the Georgia product can also drop back in coverage and make plays against the run. If he develops more moves to get after the quarterback, Carter could be a perennial Pro Bowler.

I love Teddy Bridgewater and he will be the unquestioned starter in 2018, but Mason Rudolph was a first-round prospect for me and the best player on the board. Plus, Teddy still has to prove he is fully healthy coming off a significant knee injury from 2016. Rudolph needs some polishing before he’s ready to play, but he throws a beautiful ball, is quick through progressions, and would be helped by Kelly’s offense scheming guys open.

Chukwuma Okorafor is a raw prospect, but he has all the tools to be a franchise left tackle with natural power and long arms to go along with his athleticism at six-foot-six, 320 pounds. With the Wolves, the African-born Okorafor will get to learn for a couple years before taking over for Matt Kalil (who has a contract that we can get out of before the 2020 season) on the blindside. If he reaches his full potential, “Chuks” compares favorably to four-time All-Pro Tyron Smith.

I have no medical records to determine if this is a wise pick, but hopefully Maurice Hurst—in real life—is able to have a long and successful career with the Raiders, who took him in the fifth round of April’s draft despite a heart issue. From an on-field perspective, some believe Hurst to be a one-gap defender that wouldn’t fit a traditional 3-4 scheme, but I think he is talented enough to play defensive end for our expansion team.

We have really bolstered the pass rush now, as Ogbonnia Okoronkwo was one of the most underrated players in the 2018 NFL Draft. He doesn’t have elite height at six-foot-one, but Okoronkwo makes up for it with explosiveness (38-inch vertical), strength (27 reps for bench press), and arm length (33 3/4”). I think “Obo-y”, as Wade Phillips put it, would form a deadly combination with Lorenzo Carter on the edge.

DeShon Elliott somehow lasted until the middle of the sixth round earlier this year, but he is an all-around safety that puts himself in position to make plays with intelligence and instincts. Literally nicknamed “Joker” based off the iconic Batman villain, Elliott can create chaos coming up to make a big hit or taking the ball away with an interception. Last October, he had two picks (including one returned for a touchdown) against Sam Darnold.

We are pretty set at receiver with Jordy Nelson, John Brown, and Christian Kirk (plus depth), but Marcell Ateman is the best player on the board and could takeover for Jordy in two or three years. It should help that the former Oklahoma State standout already has chemistry with Mason Rudolph—and the two could continue to build a rapport in practice—, but Ateman is an exceptional route runner for a big-bodied target.

You can never have too many pass rushers, especially with Connor Barwin and Brooks Reed both entering their age-31 campaigns. Jeff Holland is already a relentless edge defender, but he could really learn how to have a long, successful career by being under the tutelage of the veterans.  The Wolves’ young group of Carter, Okoronkwo, Holland, and Kevin Dodd could be dangerous,

Maybe this could turn out to be a wasted pick after Trenton Thompson was released by the Browns this week, but Cleveland also cut Dion Lewis and some other future contributors in recent years. I think Trenton Thompson—the only former No. 1 high school recruit to ever go undrafted—might have some medical issues impacting him, but an expansion team would afford him the opportunity to get healthy and develop.

Cornerback is our thinnest position on the roster, but that changes when we get a couple potential late-round gems. First, Levi Wallace is a battle-tested defender that started every game last season for the national champion Crimson Tide, and he led the SEC in pass breakups as a senior. Learning the position under Nick Saban should have Wallace more ready to play than most overlooked corners, and he could start immediately opposite Bryon Maxwell.

Getting our starting cornerback duo of the future in the seventh round would be quite the feat, but I think there is a good chance that’s the case with Quenton Meeks and Wallace. The former Stanford star has ideal size, is very smooth on the boundary, and will make tackles, so I’m not sure why he went undrafted in real life. I think our secondary is suddenly an emerging unit, as you will see in the roster recap below.

He might not be a three-down option at inside linebacker for an NFL team, but Jason Cabinda is a thumper that brings value in short-yardage and goal-line situations. The leader of Penn State’s defense for the past three years will also bring toughness and character to a locker room that’s building an identity in Toronto, which could allow him to stick around.

And to get the roster to 53 players, we have cut the following players: RB Dwayne Washington, OT Erik Magnuson, LB Kamu Grugier-Hill, S Deon Bush.

The roster is a little unbalanced, but expansion teams—and all teams, in my opinion—are making a mistake by passing on higher-rated players for positions of need. Also, we will need to sign a kicker and punter at some point, but overall, I think this is a really strong roster with short- and long-term promise.

Maybe one day, the Toronto Wolves will become a reality. In the mean time, it’s fun to think about what an NFL expansion team might look like.