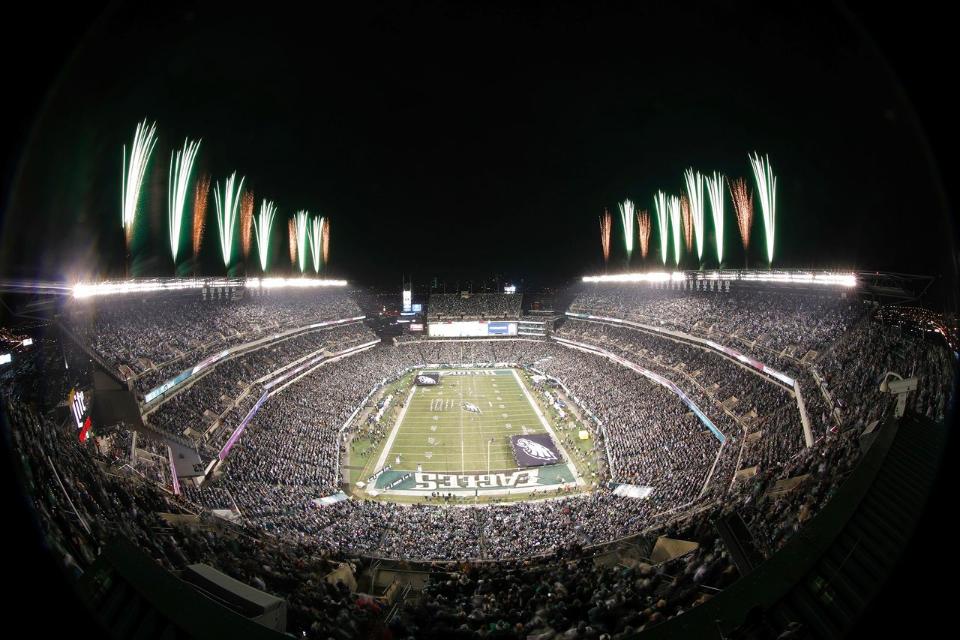 
On Sunday, the Philadelphia Eagles will play in the Super Bowl for the first time in 13 years. Anyone that talked to me about the Eagles up to and during 2015—Chip Kelly’s third season as the head coach of the team—knows I was bullish on the chances of it happening within a few years. I could not have been more optimistic about the prospects of the franchise, and Kelly was a big reason why. And despite the criticism and an approval rating that’s probably lower than any sports figure in Philadelphia over the last 20 years, the former NFL Coach of the Year laid the groundwork for this current roster to flourish as one of the league’s best and to be on the precipice of an elusive Lombardi Trophy—even if no one wants to admit it.

It started on New Year’s Eve 2014, when personnel man Tom Gamble was fired after then-general manager Howie Roseman won yet another power struggle with a fellow front office executive. If you’ve paid attention to the Eagles over the years since Roseman has been there, this was not the first time it happened—and it wouldn’t be the last.

Roseman, who is now the executive vice president of football operations, previously had at least two members of Philadelphia’s front office jettisoned: Jason Licht, who is now the general manager for the Buccaneers, and Louis Riddick, who is now an analyst on ESPN. The situation with Gamble led to Chip Kelly going to owner Jeffrey Lurie to discuss what exactly was going on, and it was difficult to blame Kelly for doing so—Roseman had shown on numerous occasions that he could not be trusted. Lurie decided to literally send Roseman to the business side of the building, where he could control the cap and negotiate contracts.

While he did not start it, Kelly won the initial battle, and dealing with the issue of a trusted football executive being ousted, the head coach had to assume a bigger role in personnel and hired Ed Marynowitz as the general manager to help. From there, the head coach would embark on re-shaping the roster to from good to great so they would better compete for championships, which is exactly what Kelly set up with his moves during the 2015 offseason.

Kelly was setting the groundwork to build a culture of success like the one up there in New England, and it would take some big roster turnover to make the happen. Gone was LeSean McCoy, who is clearly a great running back but had a hefty contract of over $11 million—trading him for 2013 NFL Defensive Rookie of the Year Kiko Alonso was designed to bolster the defense while giving the team a ton of cap relief.

If you look at the way McCoy has acted since the trade, including calling his former coach names and a racist as well as ignorantly stretching during the national anthem—along with the current state of the running back position of the Eagles—getting rid of him was probably a good move culture-wise and didn’t hurt the team nearly as much as some claim.

In free agency, Kelly signed the league’s reigning leading rusher DeMarco Murray along with Ryan Mathews—two bruising backs that were meant to pound the rock and keep the offense in favorable situation. However, the issues at offensive line, particularly offensive guard, where the roster was extremely thin, did not allow them to run inside zone to beat down defenses during the season.

Former Seahawks cornerback Byron Maxwell was signed to a big six-year contract, which was the Kelly move that received the most heat over. The criticism stemmed from a Week 1 game in which Julio Jones exploded for 141 yards and two touchdowns, but the All-Pro Jones can do that in any game, and Maxwell played like a true lockdown corner down the stretch of that 2015 season.

The biggest acquisition was getting Sam Bradford from the Rams, as Kelly took a chance on a classic drop-back passer that’s deadly accurate throwing the football. Kelly stated he wanted to also keep Nick Foles, who will lead the Eagles into the Big Game on Sunday, and he clearly had a very favorable opinion of the quarterback he helped guide to a 27-touchdown, two-interception season in 2013. But the Rams wanted him in the deal for Bradford.

The biggest miss of Kelly’s only offseason in charge was the situation with receiver Jeremy Maclin, who signed with the Chiefs. It was obvious Kelly really liked Maclin, as the Pro Bowl receiver is the type of player with the type of attitude the head coach covets. The fact that Kelly texted Maclin saying “Good luck, you’re a beast” ahead of training camp in 2015 shows how highly he thought of one of his former team leaders. However, the exiled Howie Roseman is the one that negotiated contract with players—not Kelly.

-DeMarco Murray: ran for 1,287 yards with the Titans in 2016 before battling injuries this season.

-Sam Bradford: set the then-NFL record for completion percentage (71.6%) while throwing 20 touchdowns to just five interceptions despite arriving with the Vikings before the regular season and not having the benefit of an offseason or training camp with the team. Lit up the Saints in Week 1 but suffered a knee injury he didn’t fully recover from until the postseason.

-Byron Maxwell: despite a brief benching, he continued to play like a shutdown corner for much of 2016 with Miami before being let go during the 2017 season and again playing at a high level in Seattle.

-Kiko Alonso: along with Maxwell, led the turnaround for the Dolphins defense as they made the playoffs in 2016. Continued his stellar play in 2017.

I think the evidence shows all those guys could have contributed to an elite team if they had stuck around, and I’m really not sure why some classified the moves as acquiring bad players. One assessment was that DeMarco Murray didn’t fit the offense and wasn’t a “shotgun running back,” which simply isn’t true. Murray might be better in an I formation, but he did average more yards out of the shotgun than under center with the Cowboys, and I would think Kelly knows who fits his scheme better than people on talk radio.

Also, the 2015 draft which Kelly had more command over was one of the best in recent memory. Nelson Agholor, who received a ton of criticism from fans and media, has gained confidence and is playing like a number one receiver. Without him, the Eagles offense would not be as explosive as it is right now. Cornerback Eric Rowe was traded to New England by Roseman two offseasons ago, but he’s already been a big contributor to a Super Bowl team and is looking to win another title this season (interestingly, he’ll likely be matched up with Agholor for much of Super Bowl LII). And linebacker Jordan Hicks is an All-Pro caliber linebacker that Kelly selected in the third round.

Scheme wise, Kelly gets a ton of criticism, but the arguments don’t hold water (just ask Wade Phillips or any number of people in the NFL). The big issue with the 2015 Eagles was the interior offensive line. They simply couldn’t run the ball up the middle for positive yardage, which didn’t allow for positive third-down situations or a devastating play-action attack. Kelly needed more time to build the offensive line closer to the level it currently is for the team (credit to Howie Roseman and Joe Douglas), which he didn’t get.

And if you look all over the NFL, including many teams that were in the postseason, Kelly’s impact on both the college and pro game is evident. Doug Pederson, who has done an outstanding job as the head coach of the Eagles and has really gotten the hang of calling plays in year two with the team, deserves a lot of credit for doing so, but he’s taken a lot of what Kelly did with Nick Foles back in 2013/2014 and is using it on this Super Bowl run. On the New England side, Kelly has an influence on the Patriots offense, including a huge influence on their no-huddle attack.

The sports science is another thing that must be considered when taking into account Kelly’s impact on the current Eagles. While they have had some key players like Carson Wentz, Jordan Hicks, Darren Sproles, and Jason Peters suffer season-ending injuries, they were all knee or Achilles injuries that sometimes just happen and are more difficult to prevent. Otherwise, the team has been a healthy bunch—no minor injuries that have kept guys out for an extended period, which is a testament to sports science.

Practices are yet another facet of the organization which Kelly still has an impact on. Perhaps Doug Pederson has always run his practices with tempo, but when I heard Dolphins defensive tackle Nndamukong Suh was so impressed with the speed of the Eagles in practice going from drill to drill that he apparently wants to play for them next season, it instantly sounded like a Chip Kelly practice.

Coaches are the final noticeable piece where Kelly has a lasting impact with the Eagles:

-Offensive line coach Jeff Stoutland, who Kelly brought on staff when he was hired in 2013, was about as good of an assistant coach hire as you can get, and he’s had a big impact on the use and modifications of RPOs to make them work successfully.

-Defensive backs coah Cory Undlin was brought over in Kelly’s final season with the Eagles and has had a major role in the improved play of the cornerback group.

-Sports-science coordinator Shaun Huls (joined the team in 2013) is a part of the strength and conditioning program.

-Special teams coach Dave Fipp joined in 2013, helping turn Philadelphia’s third unit into one of the best in the NFL.

The people that have identified Chip Kelly’s tenure with the Eagles as a “disaster” are mistaken. As Bill Belichick said (after Kelly’s 2015 firing) about some of the players the Eagles had gotten rid of: “I’d say a lot the players that were on the Eagles that are no longer on the Eagles aren’t really doing too much for anybody else, either.”

Kelly started the path the Eagles are currently on, but owner Jeffrey Lurie—with Howie Roseman almost certainly in his ear—made a complete 180 in a matter of months, going from being all-in with Kelly and acknowledging there’s a chance of taking a step back with so much overhaul, to firing him in late December. In fact, Lurie said he started gathering information about a potential next head coach and was talking to players during the 2015 season—something that makes it almost impossible for the head coach to get the most out of his players. Really, Kelly had no chance for success after he clashed with Roseman, as Roseman, who plays politics with the best of them, got Kelly fired not even a year after losing his power and is now getting most of the credit instead of Doug Pederson.

However, despite Kelly getting fired, the wheels were already set in motion for the Eagles. Chip Kelly did a lot of the dirty work, completely transforming a roster that wasn’t winning games until he got there in an attempt to build it into a perennial Super Bowl contender. The foundation was laid, and today, the Eagles have one of the tightest locker rooms in the NFL, and the franchise is now just one win away from a championship—and potentially many more.