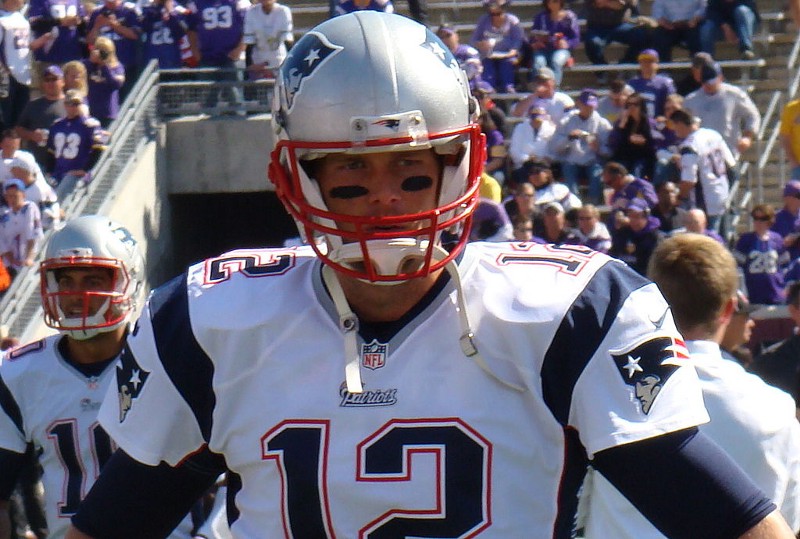 The spectacle that is known as “Deflategate” went on for way too long. January 22, 2015 — the day Patriots quarterback Tom Brady held his first press conference after the report that 11 of 12 footballs the Patriots were using in the AFC Championship were below the NFL’s minimum of 12.5 pounds per square inch (PSI) — is when it should have ended. Brady insisted he did nothing wrong, and it should have ended at that. Instead, the NFL insisted on a full-blown investigation of a game that was 45–7 — except, it was more of a witch hunt than it was an investigation. (Keep in mind that Brady was 12–14 for 131 yards and 2 touchdowns in the second half, after the Patriots footballs were swapped out for other footballs.) So why is it that the NFL insisted on bringing down one of the greatest — if not the greatest — players in league history? Let us start with some perspective.

Earlier that season, the Panthers heated their footballs using the sideline heaters. No players were investigated. No major team penalties. (The Patriots were fined $1 million and lost their 2016 first round-pick and 2017 fourth-round pick for Deflategate.)

Packers quarterback Aaron Rodgers came out and said he likes his football overinflated — even above the league’s maximum 13.5 pounds per square inch. No investigation. No fines. No team penalties.

In 2009, a Jets equipment staff member was suspended by the NFL for trying to use “unapproved equipment” to prepare the ‘K balls’ (footballs for kicking). Were the Jets’ kicker and punter investigated for this? No.

Those are three examples where there was clear evidence of actual equipment violations. Meanwhile, it has not yet been proven that the Patriots actually broke the rules during the 2015 AFC Championship Game. Of course, the media has painted them as cheaters, and people seem to have been brainwashed into the same thinking.

The initial reaction by most non-Patriots fans when they heard that the Patriots footballs were underinflated during the AFC Championship was one of spite and consolation; finally, the Patriots had been caught cheating and Tom Brady was at the center of it. People were ready to burn Brady at the stake. They had this initial reaction and stuck to it, without looking in detail at all the information.

I am not sure how many people actually did this, but I read all paperwork involved with Deflategate. You do not have to be a lawyer — I am definitely not one — to read everything and figure out that the whole thing is hogwash. If everyone would take the time to objectively read everything from the case, from the Wells Report to the court paperwork, they would have to come to the conclusion that Deflategate is nonsense.

First of all, the NFL leaked inaccurate PSI information after the AFC Championship Game. Someone within the league office told ESPN’s Chris Mortensen that the “NFL has found that 11 of the Patriots footballs used in Sunday’s AFC title game were under-inflated by 2 lbs each,” according to Mortensen’s tweet on January 20, 2015. The tweet has since been deleted.

Also, the measuring of the footballs was a complete mess. Referee, Walt Anderson, brings two pressure gauges to measure the footballs — one gauge with a Wilson logo and one without it. According to page 52 of the Wells Report, “although Anderson’s best recollections is that he used the Logo Gauge, he said that it is certainly possible that he used the Non-Logo Gauge.” Wow.

So, alternate officials for the AFC title game — Clete Blakeman and Dyrol Prioleau — used both gauges to measure the balls at halftime.

Just one of the eleven footballs tested was exactly two pounds under 12.50 PSI, very far from 11 of 12 of the Patriots balls being significantly under-inflated by two pounds each, as the NFL initially leaked for some reason. And that is without knowing if the same gauge was used as before the game. In fact, it is not clear that the gauges used were even Anderson’s gauges, according to a footnote in the Wells Report.

Furthermore, using Prioleau’s measurements, three of the four Colts’ footballs that were measured at halftime came in at 12.35, 12.30, and 12.15 — below the NFL’s minimum 12.50 PSI. From Page 7 of the Wells Report: “Only four Colts balls were tested because the officials were running out of time before the start of the second half.” OK, so they did not have time to measure more than 15 footballs during halftime, but the NFL believes that former Patriots employee, (Officials Locker Room attendant) Jim McNally, was able to deflate 11 footballs in under 1 minute and 40 seconds in a bathroom.

McNally and another former Patriots employee John Jastremski (an equipment assistant) were at the center of the Deflategate story based off McNally entering the bathroom, and some text messages between the two. These text messages were seen as the damaging evidence to prove there was a conspiracy to deflate footballs. However, the people believing that likely just listened to the media spin and did not actually read the text messages.

Please just read the text messages. They appear to say that the air pressure in the footballs during a 2014 game against the Jets was at 16 PSI (2.5 PSI above the maximum). Brady was apparently mad, and McNally to Jastremski through text said:

Other text messages from that season include McNally texting Jastremski “F — — tom….make sure the pump is attached to the needle…..f — -in watermelons coming” and “The only thing deflating sun..is his passing rating.” The texts include hateful messages, like “F — — Tom.”

These messages dispute any belief that there was a scheme to deflate footballs; if anything, it appears they were over-inflating the footballs to get Brady mad. There is not a single text message between McNally and Jastremsky that can be considered evidence they purposely deflated footballs below 12.50 PSI.

Back to the measurement of the footballs during halftime of the AFC title game. It seems the NFL League Office has no idea what the Ideal Gas Law is and refuse to acknowledge it. Ben Goodell — a twelve-year-old in Lynn, Massachusetts — did a project for the seventh grade science fair at his school. He tested footballs “in humidity, cold, snow, wind chill and the same temperature that occurred during Deflategate,” according to CBS Boston. The footballs dropped at least 2 PSI, even more than the Patriots footballs did according to the measurements taken during the AFC Championship Game. A twelve-year-old scientifically proved something that the NFL League Office seems to be unaware of.

For more in depth science articles explaining the Ideal Gas Law and deflation of the footballs, go to this page. There are numerous articles that clear the Patriots of any wrongdoing.

The NFL also supposedly did their own “random” testing of the air pressure in footballs during the 2015–2016 season. Of course, they did not release the results of this testing because it would have showed the PSI of footballs naturally declines, and more importantly, that they were wrong. They likely think that everyone would see them as incompetent for being so wrong. Instead of admitting their mistakes, they decided to keep fighting, while smearing the league’s most accomplished player in the process.

The NFL decided to do whatever is necessary to bring down Tom Brady. Brady was told that his cell phone would not be needed in the investigation. He proceeded to have the phone destroyed because he got a new one. Then, the NFL leaked that he destroyed his cell phone to spin things their way in the media. The league saying Brady destroyed his cell phone is a red herring if there ever was one. It was meant to distract from the fact that there was no evidence that Brady actually was “generally aware” of a scheme to deflate football. Everyone immediately thought Brady was hiding something, instead of objectively looking at the situation.

1. He was told that they didn’t need his phone for the investigation.

3. Even if the NFL did initially ask for his phone, the NFL is not a federal authority. He does not have to hand over his phone to the NFL. It is ridiculous to think that he should have to.

4. In this high-profile case, the information would likely be leaked or made public (the NFL leaked inaccurate PSI information, why would they not leak Brady’s private texts and emails to potentially make him look bad?) Does anyone really want their texts and emails public — especially someone the stature of Tom Brady?

5. Some of Brady’s emails were already made public, which included he saying that he has seven or eight years left, while Peyton Manning has two. Brady is an extremely competitive person, which is probably part of the reason he said something like that. He then had to apologize to Manning — his friend — for his private comments.

In the court of public opinion, the NFL appears to be winning. Most people believe that Tom Brady and the New England Patriots are cheaters and liars; it’s hard for them to change their mind on that. However, if everyone just took a step back and again — objectively — looked at all the information (which would include reading the Wells Report, reading up on the Ideal Gas Law, and reading all the court paperwork), the opinion would quickly sway against the NFL.

A big part of the problem, is that some people within the NFL League Office had to compete against the Patriots in the past — and they all lost. They likely cannot stand that Brady and the Patriots have been the model of excellence in the NFL for the past 15 years. An example of this is Mike Kensil, a former Jets front office execute for the Jets. The Patriots have owned the Jets. Kensil no longer works in the League Office, but he did at the time of Deflategate. Did he leak the information of 11 of 12 footballs being deflated by two pounds each, starting the whole firestorm that is Deflategate? Many would say “more probable” than the Patriots actually having a scheme to deflate footballs.

I haven’t even mentioned the process of the four game punishment. The NFL payed Ted Wells millions of dollars for what they called an “independent” investigation. Then, on the basis of the investigation, NFL Commissioner Roger Goodell gave NFL Executive Vice President of Football Operations Troy Vincent (former Philadelphia Eagle) the authority to initially suspend Tom Brady for four games; Goodell surely administered and gave the OK for the suspension. Then, Goodell made himself the arbitrator of Brady’s initial appeal to the NFL, upholding Brady’s suspension on different grounds than which the initial suspension was handed down.

(Please note that in 2012, Roger Goodell appointed former Commissioner Paul Tagliabue to handle the appeals of four Saints players, including Jonathan Vilma, who had been handed a year suspension — by Goodell — for “Bountygate.” Tagliabue overturned the suspensions.)

No one should have any problem if Tom Brady eventually decides to sue the NFL for defamation. Just consider that there is zero evidence that Tom Brady directed members of the Patriots equipment staff to deflate footballs for him. Normally, I think suing can be stupid (for lack of a better term) — see Pearson v. Chung, or many other cases. But almost anyone that is not a Patriots fan or did not read any of the material from this debacle, thinks Brady is a cheater. Despite Brady being a free spirited person that says he does not care what other people think, it has to hurt a little. Most people would rather not have millions of people believe them to be a cheater.

Deflategate is quite sad. A classy, all-time competitor, all-time great, three-time Super Bowl MVP, four-time Super Bowl champion quarterback has been shamed and disrespected. Most of the analysts on television ran him through the gauntlet. Sometimes, I wonder if all those people feel bad for calling Tom Brady a liar — it is very bold to accuse someone of being a straight up liar.

Maybe, if they stopped for a minute to gather and examine all the facts, they would realize their mistake.

Maybe, they just don’t want to.