Home / frontnfl / Does Every NFL Team Currently Believe They Have A Franchise Quarterback? 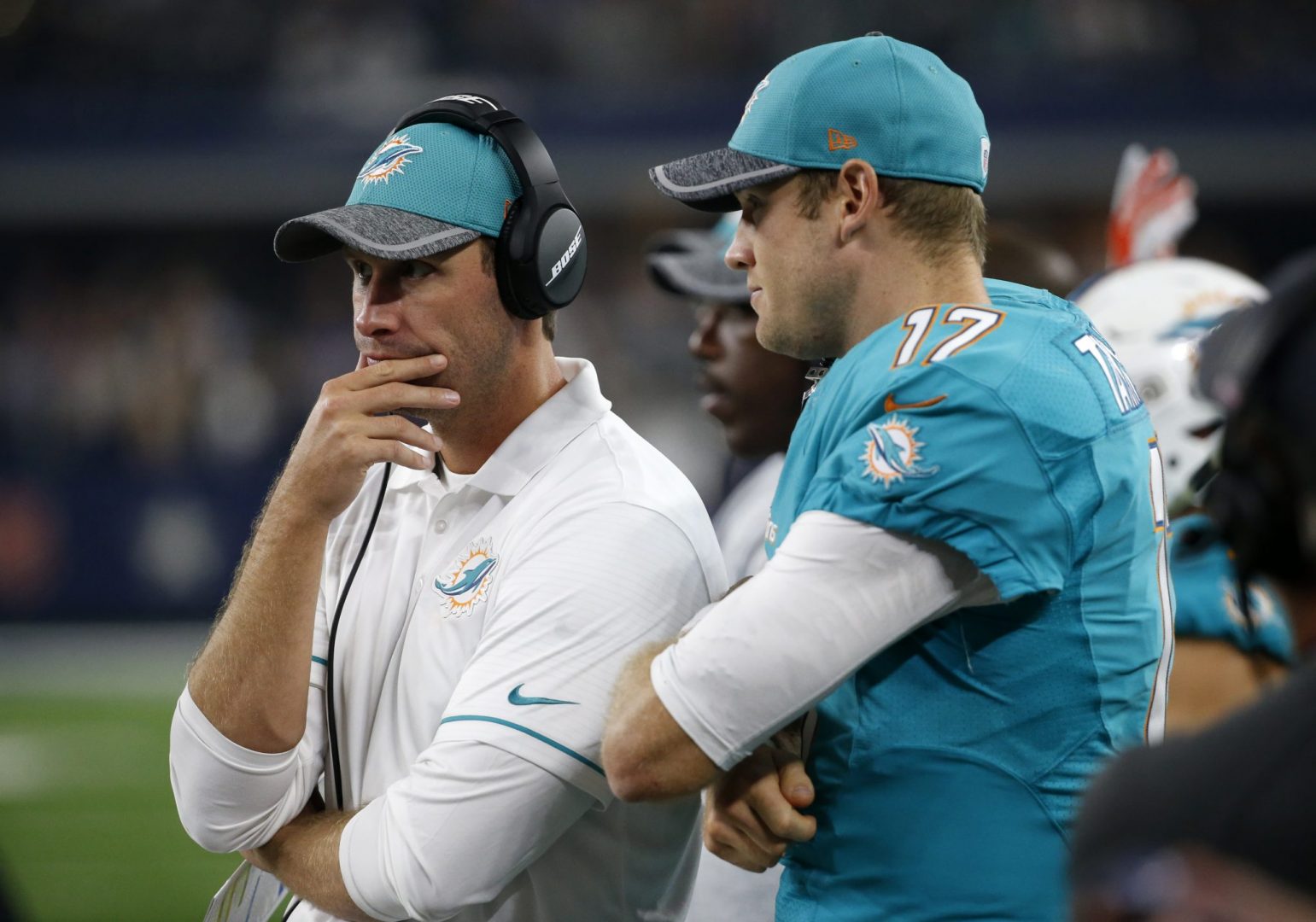 Does Every NFL Team Currently Believe They Have A Franchise Quarterback?


The most important position in professional sports is quarterback. NFL teams that don’t have a “franchise quarterback” typically struggle to compete for Super Bowls, so franchises that don’t feel comfortable at that position try very hard to get their guy. We’ve seen it a lot over the last few years, with teams making big moves up the draft board to acquire a young face of the franchise.

A record five quarterbacks were selected in the first round of last month’s draft, and all those teams presumably feel strongly about the potential of their picks becoming franchise players. Perhaps now more than any point in NFL history, every single team might feel like they have a long-term quarterback on their roster. Let’s go through each team and find out.

If Sam Bradford remains healthy, which he has unfortunately struggled to do, there is no question he’s a franchise quarterback. In fact, he’s one of my top 32 players to build a team around because of his elite upside as a passer. However, the Cardinals traded up to select UCLA quarterback Josh Rosen with the 10thpick last month, so they feel strongly about his ability to become the face of the franchise. One way or another, the Cardinals probably feel great about their QB situation.

The Falcons just signed Matt Ryan to a record-breaking contract worth $150 million ($100 million guaranteed). The former league MVP is one of the most underrated players in the league, and clearly Atlanta is very happy with him at quarterback (as they should be).

Joe Flacco won a Super Bowl for the Ravens, and he’s undeniably an elite player when it matters most. Baltimore passed on him twice, but they eventually drafted former Heisman Trophy winner Lamar Jackson with the 32nd pick in the draft. Throwing former Offensive Rookie of the Year Robert Griffin III (who is still only 28) in there too, the Ravens must love their quarterback depth chart.

After signing former Bengals quarterback A.J. McCarron late in free agency, the Bills remained patient on draft night and eventually made a move up the draft board for Wyoming quarterback Josh Allen. Despite all the criticism Allen received from people that probably never even watched Wyoming play, he’s a franchise quarterback for Buffalo.

Cam Newton just turned 29, and the former MVP should have plenty of good years left in his career. The Panthers brought in long-time coach Norv Turner as the team’s new offensive coordinator, which could help Newton develop more as a passer as he gets older.

The Bears just selected Mitchell Trubisky with the second pick in last year’s draft. The front office surrounded him with offensive-minded coaches and a lot of talent, and they clearly feel he’s their guy after they traded up from No. 3 to No. 2 to ensure they were able to select him in 2017.

Cincinnati has had opportunities to go in another direction at quarterback, but they feel strongly about Andy Dalton as their franchise leader.

Tyrod Taylor will apparently be the team’s starter in 2018, but No. 1 pick Baker Mayfield is the Browns’ franchise quarterback. The front office obviously loves Mayfield after taking him first in the draft.

After an exceptional rookie season, Dak Prescott went through some struggles last season. However, the talk of him being an overrated product of Ezekiel Elliott’s ability in the running game has gone too far. Jerry Jones and the Cowboys know Dak is a franchise player.

This time last year, most people would have said it’s crazy to think Case Keenum can be the long-term solution at quarterback. But when he was finally put in an ideal situation, he shined with the Vikings last season. The Broncos had an opportunity to draft Josh Allen or someone else, but they opted to stick with their depth chart. Second-year quarterback Chad Kelly has a ton of talent and is also someone to keep in mind.

Last August, Matthew Stafford was the one that signed a record-setting contract. Stafford isn’t going anywhere, and the golden-armed quarterback will remain among the league’s best for several more years.

There are injury concerns, just as there are with almost all players, but Aaron Rodgers is one of the greatest players of all-time. Quarterback is not an issue for Green Bay, and it probably won’t be for a long time considering Rodgers wants to play into his 40s.

The Texans were fortunate that quarterback-needy teams passed on Deshaun Watson in 2017, and it looks like Houston has a special player leading the franchise. Watson just needs to stay healthy.

If Andrew Luck’s shoulder gets back to 100% and stays that way, the Colts obviously have a bonafide franchise quarterback. If not, Jacoby Brissett has shown major flashes during his first two NFL seasons. But it’s Luck that makes the Colts feel they have their guy.

The Jaguars could have been in on Kirk Cousins, Sam Bradford, and other quarterbacks this offseason, but they gave Blake Bortles a nice contract extension and are sticking with him. The team thinks the former No. 3 pick, who is still only 26, can continue to get better.

For the Chiefs to get rid of Alex Smith after his MVP-caliber season, they must feel very confident about Patrick Mahomes II’s ability to step right in. Kansas City targeted him in last year’s draft, and they are going to unleash him in 2018.

As long as Philip Rivers keeps playing, the Chargers are set at quarterback. Rivers is an ironman that doesn’t miss games, and he’s among the league’s best. At some point, Los Angeles might need to bring in another quarterback to groom; but they might be happy with Geno Smith or Cardale Jones eventually taking over.

No one should have called Jared Goff a “bust” after one season, and he showed everyone in 2017 that he’s a franchise quarterback. The Rams are set at the position.

Head coach Adam Gase and the Dolphins have made it very clear that they love Ryan Tannehill and feel he’s their guy. Tannehill hasn’t played since December 2016, but he is now fully healthy and has a full offseason to get back into the swing of things. Remember, Miami made the playoffs in their lone season with both Gase and Tannehill.

When Kirk Cousins hit the open market, the Vikings put all their focus into getting him in Minnesota. It was only a three-year deal, but it allows Cousins to cash in again in a few years. He should be with the Vikings for a long time.

It’s a little peculiar that Tom Brady isn’t at Patriots OTAs considering he has said in the past how important that time is for building momentum toward the season. Also, Brady loves practice, so it’s strange that he isn’t out there with his guys. Brady has said he wants to play a few more years, but who knows? If necessary, the Patriots have draft capital to potentially make a move for a young quarterback in next year’s draft. Or maybe they struck gold again with seventh-round pick Danny Etling.

Drew Brees is another veteran quarterback that wants to play for a few more years, so the Saints will be good as long as that happens. It’s also no secret that Sean Payton thinks that former BYU quarterback Taysom Hill, who actually contributes on special teams for New Orleans right now, can be the team’s quarterback of the future. Undrafted free agent and Ohio State great J.T. Barrett is in the mix as well.

Eli Manning is 37, but the Giants think that he has a lot of good football left in him. The team drafted Richmond quarterback Kyle Lauletta in the fourth round last month, and it sounds like they are very optimistic about his long-term outlook. After opting for Saquon Barkley instead of a quarterback, the Giants still feel they are OK at the position.

The Jets were very happy to have USC quarterback Sam Darnold drop to them at No. 3 in the draft. They think and hope Darnold is a long-awaited long-term solution for the franchise.

Last year before Matthew Stafford, it was Derek Carr that set the record for an NFL contract. Jon Gruden wouldn’t have come back to coach the Raiders if he didn’t feel Carr was a franchise quarterback.

The Eagles are set at quarterback, as Carson Wentz was lighting it up last season before his injury. And they wisely kept Nick Foles in the mix after he led the team to its first Super Bowl.

It’s hard to get a true indication about whether Ben Roethlisberger wants to play a few more years or not, given that he originally said that he considered retiring soon, but he’s still obviously a franchise quarterback. The team has said they felt rookie third-round pick Mason Rudolph was up there with the first-round signal-callers from last month, and Rudolph could end up taking the mantle from Big Ben.

Jimmy Garoppolo is yet another quarterback that signed a record-breaking deal in the past year. The Niners are ecstatic that Jimmy G is their guy. And the team also believes they have a top-notch backup quarterback in 2017 third-round pick C.J. Beathard.

Rumors are swirling that the Seahawks and Russell Wilson are not in a good place for whatever reason. But Seattle can put the franchise tag on Wilson—one of the premiere building-block players in the league—for three years if it comes to that.

The Buccaneers drafted Jameis Winston with the first pick back in 2015, and they probably aren’t thinking about moving in any other direction at quarterback.

Marcus Mariota battled injuries and had a subpar season for the most part in 2017, but the Titans know he’s clearly a franchise quarterback. Mariota could quickly become one of the NFL’s elite players.

The Redskins targeted Alex Smith while letting Kirk Cousins walk because, frankly, they think Smith is a better quarterback. Washington is very happy to have the second-winningest quarterback since 2011 on their roster.

The Bengals, Broncos, Dolphins, Jaguars, and maybe the Giants are the only teams that I believe might be considered iffy, but their actions indicate they are happy with where they are at the game’s most important position. So, it appears all 32 NFL teams feel they have a franchise quarterback—which is an unprecedented situation.