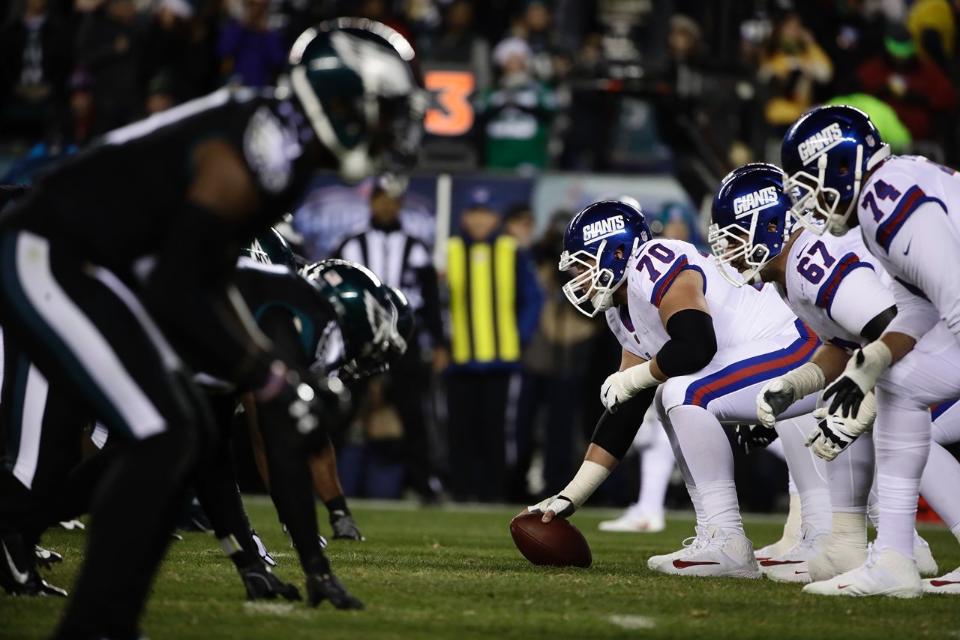 
With Ezekiel Elliott suspended for six games (pending appeal), the NFC East looks to be wide open. Elliott—who will probably struggle to win his appeal for even a reduction in games—might be Dallas’ best player, so his loss obviously hurts their chances to win the division for a second straight season. The Giants, Eagles, and Redskins all could have a prime opportunity to take the division.

First of all, the NFC East is one of the topsy-turviest divisions in the NFL. There hasn’t been a repeat NFC East champion since the Eagles’ run of dominance in the early 2000’s. Elliott missing over a third of his team’s games will not help the Cowboys’ chances in ending that streak of no repeat champions.

Here are the first six games for Dallas this season.

The Giants had the Cowboys’ number last season, winning both games. It’s unlikely to get any easier with Elliott out for Week 1. After that home game (the Giants have shown they can win in Jerry World), the Cowboys go on the road to Denver and on the road to Arizona. There’s a chance the Cowboys are underdogs in all three of those games.

Then in Week 4, the Cowboys play the Rams, who are led by new head coach Sean McVay. Of course, McVay was the offensive coordinator for Washington for the last three seasons, and he might be able to cook up something nice against the Cowboys with his new team—the Rams just added star receiver Sammy Watkins in a trade with the Bills, so that helps big time.

The Cowboys couldn’t beat Aaron Rodgers and the Packers in AT&T Stadium in the playoffs last year, so it’s very difficult to see them being favored against them without Elliott. Luckily, the Cowboys do have a bye before they play the 49ers—who might be improved this season after adding pieces to the roster, but Dallas should be heavily favored.

It wouldn’t be surprising at all to see the Cowboys 2-4 or 1-5 after that six-game stretch. That’s not too deep of a hole to dig out of, but it certainly wouldn’t help their playoff chances. It’ll be up to New York, Washington, and Philadelphia to make it hard on the Cowboys to get back into the playoff race. They’ll each have two games versus the Cowboys; though the Cowboys will have Ezekiel Elliott back, assuming his appeal doesn’t last into the season. If the Redskins and Eagles play their division rival tough, they can make it a miserable season for the Cowboys.

The schedule sets up nicely for the Giants to separate themselves and win the division for the first time since 2011. Aside from playing the Cowboys without Elliott in Week 1, they appear (at least right now) to have an easier schedule than the Eagles and Redskins do. It’ll come down to how well the aging Eli Manning plays, and how well Odell Beckham Jr. and Brandon Marshall get along. We know the two Pro Bowl receivers can cause some drama, so that might happen if one or the other feels they aren’t getting enough passes—which could happen even if they are winning.

For the Redskins, the defense and secondary needs to step up around Josh Norman. If they improve defensively, Jay Gruden and Kirk Cousins should be able to do enough offensively, even with moving parts at receiver from last season, to be competitive in the division.

The success of the Eagles will probably come down to 1) Carson Wentz getting better from the end of last season, and 2) the play of the cornerbacks. Despite the hype around Wentz, he is still a question mark. And Ronald Darby was just acquired in a trade with Buffalo to improve the corners, but it might not be enough.

After Dak Prescott’s superb rookie season last year, he could always carry the Cowboys and insert himself into the elite quarterback conversation with Elliott gone. There does seem to be something special about Prescott, and this could be his opportunity to totally take over the team. Critics say Prescott is carried by Elliott and the offensive line, but don’t be surprised if he proves the critics wrong again.