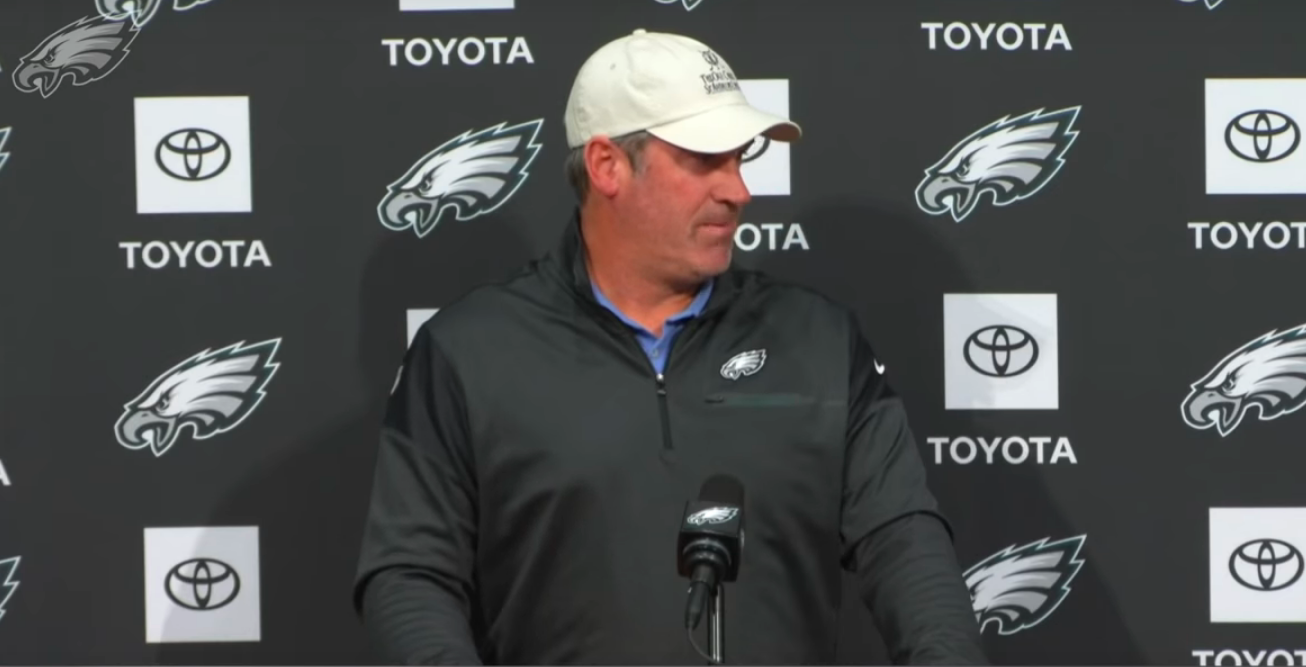 
Nearly nine months removed from helping deliver the franchise its first Super Bowl victory, Eagles head coach Doug Pederson is dealing with a lot of criticism from the Philadelphia media over the team’s 3-4 start this season. Pederson has been testy with the media in the past, and he again fought back against the press’ assessment of him as a coach the day after Sunday’s loss to the Panthers.

The criticism is basically: “Oh, they blew a 17-0 fourth-quarter lead; why aren’t running the ball more to run out the clock so they win?” In the nine plays where the Eagles had the lead in the fourth quarter, they threw the ball eight times and were sacked once.

Additionally, Pederson said he called three run plays in the fourth quarter prior to the two-minute drive, so Wentz must have audibled from a run to a pass at some point. And the Eagles were averaging 2.6 yards per carry against the stout Carolina defense, so simply running the ball was certainly not guaranteed to deliver better results—it might have just been three-and-outs.

Yet, that didn’t stop the press from questioning Pederson on everything. Because the defense gave up 21 fourth-quarter points, they also asked why they didn’t blitz more.

“You’re asking me should I run the ball more, should we blitz more? I mean… what do you want me to—it’s crazy,” Pederson finally declared after again being second-guessed on his decisions in hindsight. It was refreshing to hear him call the questions crazy, as if to say, “do you think you could do a better job coaching than me?”

I understand the media maybe on occasion questioning something with the hope of getting more insight from a head coach, but Pederson is absolutely right to react the way he did to the questions. He’s a Super Bowl-winning head coach and has some reporters constantly playing armchair quarterback when the team loses a game.

The previous two Eagles coaches—Andy Reid and Chip Kelly—also dealt with a media possessing a tone that indicates they might believe to be on the same knowledge level as an NFL head coach. Reid mostly let the criticism roll off him without fighting back the way Pederson does. Kelly basically toyed with the media and would often effortlessly put them in their place. In the end, it was probably the press that ran them both out of town.

Good thing Pederson has a championship, because the negativity from the Philly media might otherwise be pushing him out if it keeps going on like this between the two sides. Pederson, who has probably dealt with nitpicking and second-guessing for a while now considering he was previously a high school football coach, had enough at the end of Monday’s press conference:

“Now you’re getting into game plan stuff and you’re getting into scheme, and you guys aren’t in there watching the tape like we are 18 hours a day and putting game plans together. It’s easy to sit in a press box and say, ‘hey, they should run the ball.’ Come down on the sideline with me and make decisions. … I mean, so until you’re down there with me on the sideline making in-game decision, then, I guess you can ask all you want.”

He’s 100% right. Literally anyone can sit up in a press box—or anywhere in the stands or from behind a television—and criticize when things aren’t going well. It’s easy, as Pederson made sure he emphasized; anyone can be negative while acting like they actually know what they’re talking about—even when criticizing a championship coach.

And this is especially good to hear because Pederson was not like this during his first season as the Eagles head coach. He basically let the media say what they wanted to him, and it seemed like the front office was in too much control of him. That totally changed last season, as Pederson’s aggressiveness and assertiveness both on and off the field showed.

I think any fair-minded person can understand where Pederson is coming from; and while Philadelphia is one of the most negative sports media markets, the presence of know-it-alls is a widespread issue across the NFL and sports in general.

I don’t go on it much at all anymore, but I know there are also far too many arrogant and unrelenting critics on Twitter. Things like “Jon Gruden is a dinosaur,” “Coach X is an idiot for not giving so-and-so the ball,” and “Player X is garbage” are spewed too often by supposed experts on the social-media platform that think they can do the job better than those at the top of their profession.

Those in the NFL make a lot of money, but these head coaches commit a lot of time and grind to win games, which isn’t an easy thing to do despite what the press might think. Hopefully Pederson’s comments about watching countless hours of film and putting together game plans resonates with people, but there might not be any getting through to anyone that believes they know more than tremendously-committed professional coaches.