Home / frontnfl / Early Look: One Team from Each Division to Make a 2017 Playoff Push 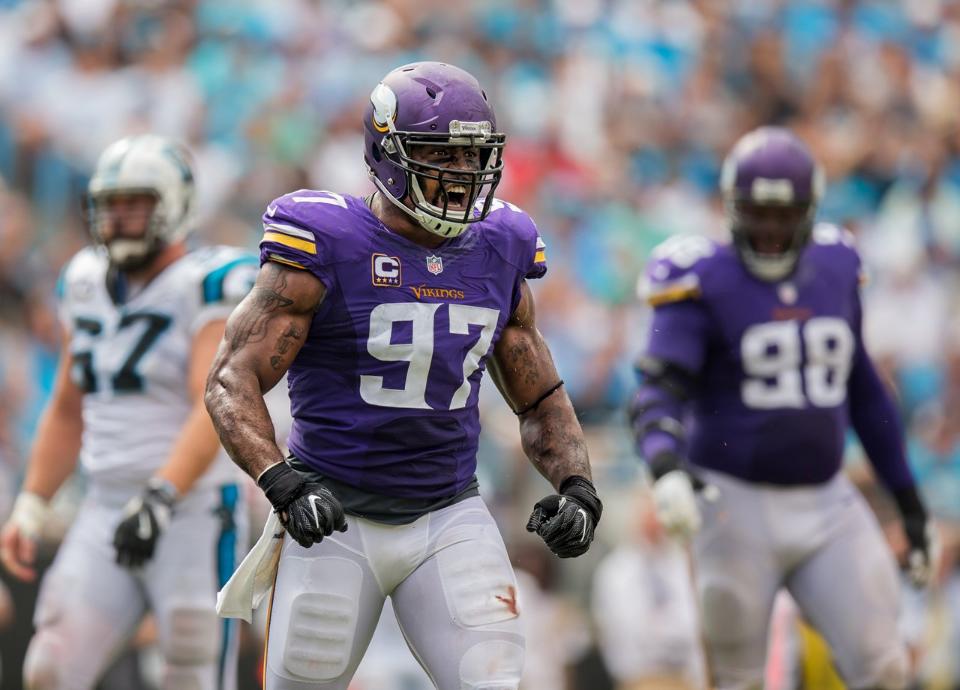 Early Look: One Team from Each Division to Make a 2017 Playoff Push


Going through each division, these are eight teams (one from each division) that could make a run next season. This is a bit of a projection in terms of what might happen this offseason, so it’s not where I believe each team stands today. For example, some teams are boosted if they have more cap space or good draft picks (like the Titans).

Led by an extremely talented defense, with a defensive head coach, the Vikings are a team that could be among the best teams in the NFL next season. During their 5-0 start, the Vikings defense was the best in the NFL by far. Last season, the offense was led by Sam Bradford, who threw 20 touchdowns and just five interceptions while setting the NFL record for completion percentage in a season. The offensive line battled injuries was the worst in the league, and the Vikings were without their best offensive player, Adrian Peterson. There is speculation that Peterson might not be back with the team, but I expect the two sides to get his cap number down and keep him with the franchise. If he and the offensive line can stay healthy (and improve) the Vikings offense can take a step forward. The Minnesota defense, along with a quarterback that doesn’t make mistakes, is a recipe for a potentially great team.

With the 16th pick in a good draft, the Ravens have a chance to add a player that can make an immediate impact. They apparently will look to give the offense a boost at skill positions. This is a very deep running back draft class, so the Ravens might look to add a difference maker there to go along with Kenneth Dixon and Terrance West and add more balance to the offense. Baltimore always has a good defense, and next year should be no different. The Ravens will likely try to run the ball more next season to take pressure off Joe Flacco, who seems to have to chuck it up a lot more than John Harbaugh would like.

After being one of the best teams in the NFL in 2015, the Cardinals obviously took a step back but still have a ton of talent on the team. Carson Palmer is expected to return and when he’s on, he’s among the best quarterbacks in the NFL. If the offensive line can keep him comfortable, the offense can fly high again in 2017. Even with all their talent on both sides of the ball, the Cardinals have a lot of cap space and can bolster the roster even more.

The Titans are in a great position. They have two picks in the top 18, including the number five overall pick, in the 2017 NFL Draft. Tennessee already has their quarterback, Marcus Mariota, and he appears to be getting better and better. I believe that Mariota has a chance to be an elite quarterback in the NFL, perhaps starting next season; that enough might be good enough to get the Titans in the playoffs. They also are expected to have over $60 million in cap space. The future is bright for Tennessee.

The NFC East has become very balanced to have a different champion all the time now. After winning the division in 2015, the Redskins missed the playoffs in 2016. Their two top wide receivers, DeSean Jackson and Pierre Garcon, might not be back; but they have first rounder Josh Doctson waiting in the wings after he didn’t play at all in his rookie season due to Achilles issues. Like other teams on this list, the Redskins have a lot of cap space and showed they’re willing to spend it.

This division might be the toughest to choose because a good argument can be made for the Panthers, Buccaneers, and Saints. I’m going with New Orleans because I believe they have the best quarterback in the division and the offense showed they can still put up major points. Brandin Cooks and Michael Thomas form one of the best—if not the best—receiver combos in the NFL. The Saints had a nice midseason stretch defensively, so if they get more consistent on that end, they could be in the playoffs next season. Going against them is the tough division.

Playing in a division with the Patriots, the Bills are already behind the eight ball. It’ll be a challenge for them to make the playoffs, but if new head coach Sean McDermott can revitalize the defense, they could make some noise with a good run game and defense combination. Quarterback is a question mark, as it seems unlikely Tyrod Taylor is back with the Bills.

Philip Rivers is too good for the Chargers not to get back into the playoffs sometime soon. The Broncos have an outstanding defense, but I’m going to focus on the Chargers because of their offense. With Keenan Allen set to return to strengthen the receiving corps—along with Melvin Gordon leading the running game—the Chargers should cause headaches for opposing defenses.