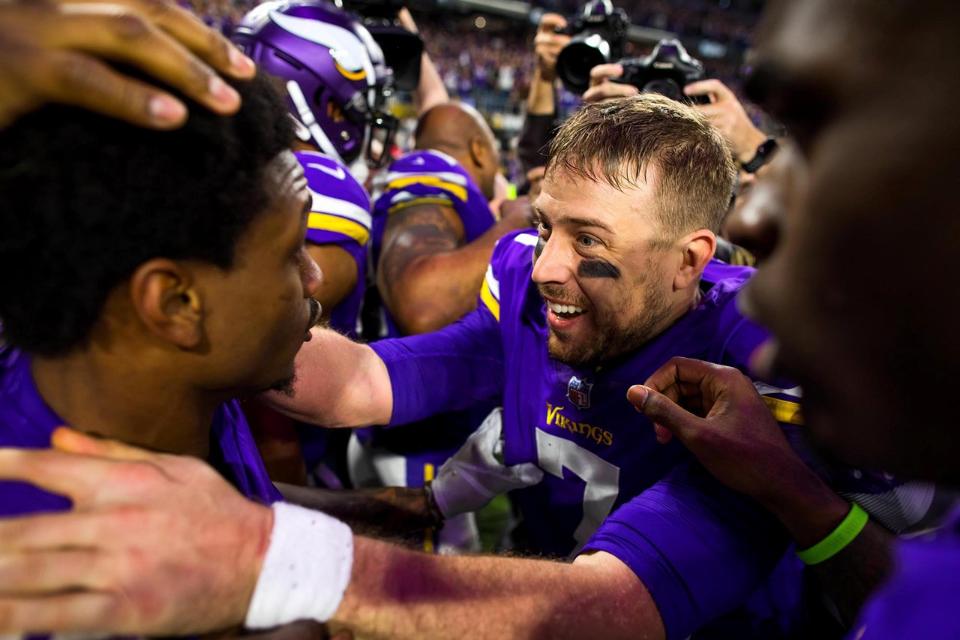 Ecstacy, Agony, And The Minneapolis Miracle


As a sports fan, there is nothing more exciting than experiencing a moment in real time and knowing immediately that it will live forever in the lore of the game. That’s exactly what football fans got at the conclusion of Sunday afternoon’s playoff game between the Vikings and Saints, when Stefon Diggs turned a desperation heave by Case Keenum in the game’s dying moments into a jaw-dropping 61-yard touchdown scamper to clinch a trip to NFC Championship. It’s one of those moments that I (and everyone else who saw it) will remember in vivid detail—Diggs’ acrobatic leap to reel in Keenum’s pass; the sudden swelling roar of the crowd as they collectively realized that Diggs had an uninhibited path to the promised land; Diggs ripping his helmet off and throwing it aside in jubilation as he came to a halt in the back of the end zone, moments before he was mobbed by a teeming mass of purple jerseys; the rising disbelief in the voice of the typically low-key Joe Buck as he exclaimed, “Pass is…caught!  Diggs…SIDELINE! TOUCHDOWN! UNBELIEVABLE!!!”

It was the first time in NFL history that a playoff game had ended on a walk-off touchdown in regulation, and it was one of the most electrifying moments that I have ever witnessed in a game of football. The manic energy that overtook US Bank Stadium in that instant was palpable—it seemed to pulse out of the TV screen. (Also enjoyable, although far less memorable, was the subsequent mini-farce that resulted as the officials tried to rein in the chaos for long enough to run the extra point play that the game officially could not end without, even as the Vikings players and staff were storming the field in celebration and the Saints were already heading to the locker room. In the end, several Saints had to come back out of the locker room so the play could be run, and the Vikings ran a meaningless kneeldown almost five full minutes after Diggs’ touchdown against a ragtag group of seven random New Orleans players, including their punter.)

For the Minnesota Vikings and their fans, this moment was a long time coming. In spite of all the great teams that have worn purple and gold over the decades, the most famous moments in the history of their franchise have always been the ones they’d rather forget—four Super Bowl losses, including three in which they scored seven points or fewer; Jim Marshall returning a fumble 70 yards in the wrong direction; Gary Anderson missing wide left on a game-winning chip shot field goal in the 1998 NFC Championship; Blair Walsh also missing wide left on a game-winning chip shot in the 2015 wild card round. Few football teams have suffered through as many moments of heartbreak as Minnesota.

There is an unspoken but treasured understanding in place for those of us who are way too deeply invested in the fortunes of our favorite teams: that this is not always going to be fun, and it will sometimes leave you cursing and crying and wishing you’d never even heard of professional sports, but it will all be worth it when your franchise gets to experience one of those rare, sublime, perfect-enough-to-seem-scripted moments. For perennially-coming-up-short franchises like Minnesota, those moments can take so long to arrive that you begin to lose faith that they will ever happen…and then you get a 61-yard touchdown pass as the clock hits triple zeroes, the crowd loses its collective mind, and you remember that hitching your emotions to a sports team can be more than just an exercise in pointless masochism. The balance of agony and ecstasy has long been tilted heavily in the direction of agony for the Vikings; now, at last, they have their forever moment. Even if Minnesota crashes and burns next week against the Eagles, they will always have the Minneapolis Miracle.

Sadly, though, that’s not the end of the story. Because while Vikings fans just experienced a life-affirming moment of bliss, New Orleans Saints fans sat through one of those games.

If you have been a sports fan for long enough, you know the kind of game I am talking about. There are days when your team loses, and there are days when your team reaches through the TV and rips your still-beating heart out of your chest, then throws it on the ground and spits on it. Those are the games that you don’t talk about, the games that lurk menacingly in the back of your mind like an angry ghost, the games that have you randomly waking up in a cold sweat in the middle of the night for years afterwards. Every fan base has their own versions of these scars, and some have more than they count. Buffalo fans have Brett Hull’s skate in the crease and Frank Wycheck’s forward pass. Boston fans have the Helmet Catch, Bill Buckner, and Bucky F’n Dent. Falcons fans have 28-3. Here in Denver, it’s Peyton Manning’s fumbled snap, Patrick Roy’s Statue of Liberty, and…*shudders violently*…Rahim [string of profanities deleted] Moore. And now Saints fans can join the club, courtesy of Marcus Williams’ missed tackle.

Poor, poor Marcus Williams. I would say that Marcus Williams has probably been having nightmares about that play, except I highly doubt he has gotten so much as a minute of sleep since Sunday. Williams, if you don’t already know, was the lone Saints player between Stefon Diggs and the end zone when the pass was in the air. As Diggs came down with the ball in his hands, Williams lunged at him in an attempt to cut his legs out from under him. To say the tackle attempt was unsuccessful is an understatement; not only did Williams fail to so much as graze Diggs on the way to the ground, he did manage to knock someone over—his teammate Ken Crawley, the only other Saint who might have had a shot at catching Diggs on his way to the end zone. Within the space of a couple seconds, Williams and Crawley were tangled on the ground, Diggs was waltzing into the end zone, and the Saints were eliminated from the postseason.

Williams has been absolutely shredded in the media since that play, so let me go against the grain for a moment and point out that the decision he made was perfectly defensible. Diggs caught the ball about a foot from the sideline on the 34-yard line—if Williams had gone the safe route and shoved him out of bounds, it would have set the Vikings up for a potential game-winning field goal from about 51 yards away (and remember that just a few minutes previously, Minnesota kicker Kai Forbath had nailed a 53-yarder to give the Vikings a short-lived 23-21 lead). Williams should get credit for realizing in the moment that his best shot at securing a Saints victory at that point was to keep Diggs from getting out of bounds, and that knocking the Vikings receiver off his feet would give him a better chance of doing so than attempting an arm tackle. If he had pushed Diggs out of bounds, he wouldn’t have been the goat, but the Saints’ season wouldn’t be any less over. Williams’ execution left a lot to be desired, but the decision itself wasn’t as catastrophically boneheaded as it seems in retrospect.

Williams is a good player who just had an impressive rookie season, and he probably has a long and productive NFL career ahead of him. However, it’s hard to imagine that he will ever be able to shake off the stigma off that single, disastrous missed tackle. For better or worse, that play is going to be the one that defines his legacy; when his career is over, he will live on in eternity on the wrong side of history. For as long as the NFL exists, just saying the words “Marcus Williams” will be enough to render any die-hard Saints fan catatonic. And the more I watch that play, the more I can’t help but feel sorry for him. At the risk of veering off-topic a little, it calls to mind the rawest nerve in my personal collection of sports scars, a guy I mentioned a few paragraphs ago—Rahim [string of adjectives I would never say in front of my mother] Moore. Like Williams, Rahim [incoherent sobbing/cursing] Moore was a safety taken in the second round who was coming off a promising rookie season when he made the gaffe that defined his career. And while he had several more perfectly decent seasons afterwards, I (and every other Broncos fan out there) could never hear his name again without having a vivid slow-motion flashback to that play: Flacco’s high-arcing pass down the sideline, the sinking feeling in my stomach as Moore came into the picture and it became clear how horribly out of position he was, his diving, flailing pirouette as he desperately tried to swat away a ball that was far out of his reach…excuse me, I need to make a quick phone call to my therapist.

The point is that, no matter what else Moore did in his career, the clock was ticking on his Denver tenure from the moment that pass sailed by him into the arms of Jacoby Jones. And sadly, I suspect the same might be true for Marcus Williams. New Orleans fans just experienced a loss that they will never live down, never make peace with, and Williams will always be the face of that loss, unfair as that may be. These are the moments that a fan base can never truly leave behind—they are always there, tucked away in the dark corners of your psyche, tormenting you. It may be silly, and it’s certainly irrational, but every diehard knows that it’s the truth. While Stefon Diggs will never have to pay for a drink in Minnesota again, Marcus Williams will probably never be able to show his face at a bar in New Orleans. The double-edged sword of sports fandom has never been sharper than it was in Minnesota on Sunday. Sometimes, your wildest fantasies come true in spectacular fashion; sometimes, there is only misery.

In conclusion, hug a Saints fan this week. They’ve never needed it more.