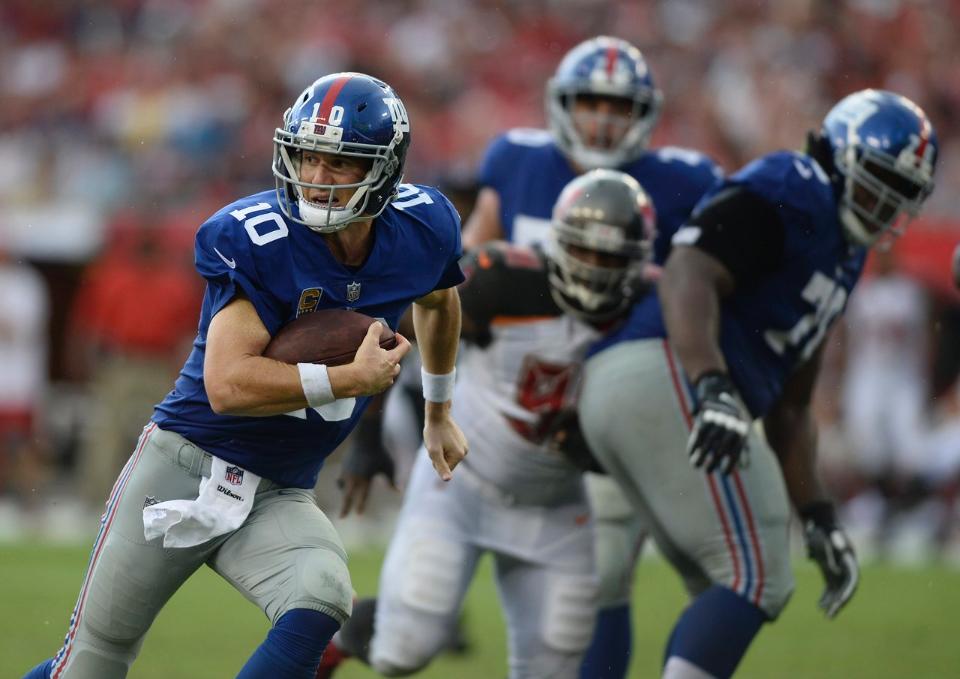 
It is Week 6 of the NFL season and some teams have been off to a beyond disappointing start. Of course, injuries are always thrown into the mix, affecting some team’s ability to adjust and adapt. However, there are clear gaps for some NFL teams and if they want a fighting chance to keep the hope and attention of their fans for the rest of the season, some serious changes need to be made. This article evaluates a handful of teams who have been relative disappointments in the first five weeks of the NFL season and goes into what is holding back these teams from reaching their upside.

It’s safe to say the Arizona Cardinals, in many aspects, have seemed like they were out to lunch this year during the Cardinals’ 2017 games. Just two years ago, the Cardinal’s offense was a feared powerhouse and a force to reckon with. The west-coast team’s 34-7 loss versus the Philadelphia Eagles put on display all the gaps the Cardinals are experiencing. It is pretty obvious that the Cardinals’ offensive line has contributed to a big portion of the struggle this year, with Carson Palmer mostly fending for himself and spending way too much time on his back. It does not help that star running back David Johnson is currently on Injured Reserve with no timeline for return. It will be interesting to see how the Cardinals’ attempt to use newly-acquired Adrian Peterson to make something happen on the offensive side of the ball.

However, we learned a new challenge the Cardinals are facing from the Week 5 game versus Philadelphia. The Cardinals’ defense really didn’t show up in the game where they were routed and embarrassed, which was concerning because the defense has normally done a lot to keep the Cardinals in games and to make up for the gaps apparent in the offense. However, Carson Wentz threw the ball with ease, and LeGarrette Blount ran without trouble versus the Cardinals’ defense. Wentz, up against a defense ranked fifth going into Week 5, threw for 304 yards and four touchdowns versus the once-powerful Arizona team. The Cardinals are suffering from a variety of injuries in important positions, but eventually it is time to build upon the available players and create a team worth fighting for, not one just waiting on injuries to heal up.

What happened to the almighty, (almost) unbeatable Cowboys from the 2016 season? After being carried impressively on the backs of rookie quarterback Dak Prescott and running-back Ezekiel Elliott last season, big things were expected from this year’s Cowboys team. The Cowboys are now 2-3 with a tough stretch ahead following their Week 6 bye week. The issue for the Cowboys is not in the offense. The Cowboys are doing exceptionally well getting the ball down the field, with Dak Prescott throwing for 251 yards and 3 touchdowns in their shootout loss to Green Bay on Sunday. But while Dallas has been effective at moving the ball, all their opponents have had success getting down the field as well.

Defensive end DeMarcus Lawrence has been incredibly successful thus far defensively, currently leading the league in sacks with 8.5. However, no other player on the Cowboys’ defense has been explosive or a difference-maker so far this season, which is where the problem lies. Dallas linebacker Sean Lee, who contributes to the Cowboys’ ability to “seal the deal” on defense has been out the last two games after getting injured against the Cardinals in Week 3. The Cowboys’ offense must remain consistent while the defense needs to step it up, and get Sean Lee healthy if they want to see production. Without a defense complementing Prescott and the offense, the Cowboys will become a forgettable team in the 2017 season.

Your reigning Super Bowl Champions are at just 3-2, sitting at third in the AFC East. What happened to Tom Brady and his elite squad? Of course, they pulled out a win on Thursday Night Football versus the Tampa Bay Buccaneers, but it wasn’t a performance that inspired much confidence. Patriots fans are used to demolishing their competition and putting up big points offensively, when the Patriots beat the Buccaneers just 19-14, there was little to celebrate. The issue New England is struggling with is no surprise to anyone who has seen even a minute of their games this season: the defense. Perhaps the offense performing uncharacteristically is a chain reaction to the defensive struggles, but it seems Brady at times has to force passes he would normally stay away from. The offensive line has been subpar, with a better performance on Thursday night than they’ve had all season—but that still left Brady getting hit nine times. Critics saw replacing Edelman as New England’s largest concern and the costly signing of cornerback Stephon Gilmore was seen as a luxury investment that built off last year’s top ranked scoring defense. While Brady has missed the consistency of Edelman’s safety valve-like drag and slant routes, a regressed o-line has aggravated Edelman’s absence resulting in a few uncharacteristically forced and errant throws. The offensive line needs to step up their game, and provide Brady with a clean pocket to let him put up his “G.O.A.T.” performances every week.

While the offense may not be performing consistently, the Patriots’ defense is in need of some serious help. The defense has done a great job of making decent quarterbacks look their own, Tom Brady, with how they are moving down the field. New England is ranked dead last in defense right now. This defensive issue is fixable, most possibly if the secondary makes improvements immediately, mostly by just getting out of their own way. Here’s a thought to consider: the Patriot’s defense has thus far allowed a higher completion percentage, more passing touchdowns, and more yards per attempt than their elite quarterback has racked up this season. Something must be done to fix this defensive slump, or the Patriots will end up behind the New York Jets in the AFC East rankings, a place no team wants to be.

Nothing is more heartbreaking than hearing your team is the “worst in New York” or “worse than the Jets” after years of being the superior “Big Apple” team. The New York Giants, to say the least, have fallen apart. 2016 must have been a season full of false hope, because Giants fans are in shock and awe at just how bad their team is playing this season. After a season-ending injuries to both superstar receiver Odell Beckham Jr. and veteran Brandon Marshall, along with injuries to Sterling Shepard, and Dwayne Harris, the Giants are lucky they escaped their loss to the Los Angeles Chargers with a 27-22 loss. The offensive line must be stronger and not let the opponent rattle the already-shaky quarterback, Eli Manning. Manning needs to not be dependent on his now-out receiver, Beckham, and somehow find other guys to step up for him. And the offense as a whole needs to stay on the field to give the defense a break and vice versa. This team is officially at rock bottom, I think I could write a whole article about what needs to be fixed. But as an unfortunate yet devoted Giants fan, let’s just leave it at this: it seems like the 2017 season is a lost cause for the New York Giants, and it is time to start thinking about seeing what you need to see for 2018 so that this tragedy cannot be a reality for Giants fans for more than one year.

The Oakland Raiders suffered a disappointing loss to the Ravens on Sunday, leaving the California team at 2-3 without things looking up. The Raiders’ problem is simple enough to see: they need Derek Carr in and healthy. As seen after the franchise quarterback’s injury late in the 2016 season, the team simply cannot function without their versatile quarterback. Another key component is Carr getting back into the groove he has been in the past with his receivers. Carr is much like Aaron Rodgers in that he thrives off connections with his receivers—the AC/DC (Amari Cooper and Derek Carr) duo needs to get back into working Cooper into the offensive drives, because when he is incorporated, beautiful things happen. Cooper only has 13 receptions for 118 yards and one touchdown this season, a major shock for someone that was seen as a prime candidate to emerge as a superstar in his third season. Last year, Cooper was the leading receiver for Oakland, with 83 receptions for 1,153 yards, but he’s not close to that pace in 2017. Carr and his top 2016 receiver need to rediscover their chemistry to keep momentum on the offensive side of the ball for the rest of the season.

The Raiders’ defense has held their own against their opponents, keeping their losses relatively close considering their lack of offense. Derek Carr will hopefully ready to come back against the Chargers, which should give the Raiders a much better chance in the game. But another problem that stands in their way is the other teams in the division. AFC West teams Chiefs and Broncos have been powerful this season, so the Raiders are going to need to pick things up—and quick—if they are going to make the playoffs this season.

Why do so many fans want separation between sports and politics? The Pittsburgh Steelers might be your answer. Since their issues in Week 3 with the Anthem, there’s seemingly been just off with the team. Following controversy, Antonio Brown only caught 4 receptions for 34 yards versus the Ravens in Week 4 and had a sideline blowup after Ben Roethlisberger was pressured and didn’t see Brown side open for a touchdown. Despite the Steelers’ win that game, Roethlisberger threw one interception and just one touchdown. Steelers fans were left scratching their head wondering why their quarterback was not the “Big Ben” they knew. Then came this week versus the Jacksonville Jaguars where they lost 30-9. Roethlisberger had one of the worst games of his career, as he saw two of his five interceptions returned for touchdowns by the Jags. On top of that, Le’Veon Bell couldn’t get anything going either and didn’t look like his All-Pro self, rushing 15 times for just 47 yards. The once powerful black-and-yellow offense looked like a different team last week and it doesn’t look like it will be getting any better for them.

Not only was their offense atrocious, the second-ranked defense entering Week 5 did not have a game to remember, as rookie running back Leonard Fournette barreled through the Steelers’ defense for 181 yards and two touchdowns. The Steelers, prior to this game, were spoke highly of along with other AFC teams including the Kansas CIty Chiefs. If they can’t get it together, they may just be switching places with the 2016 Jaguars this season.