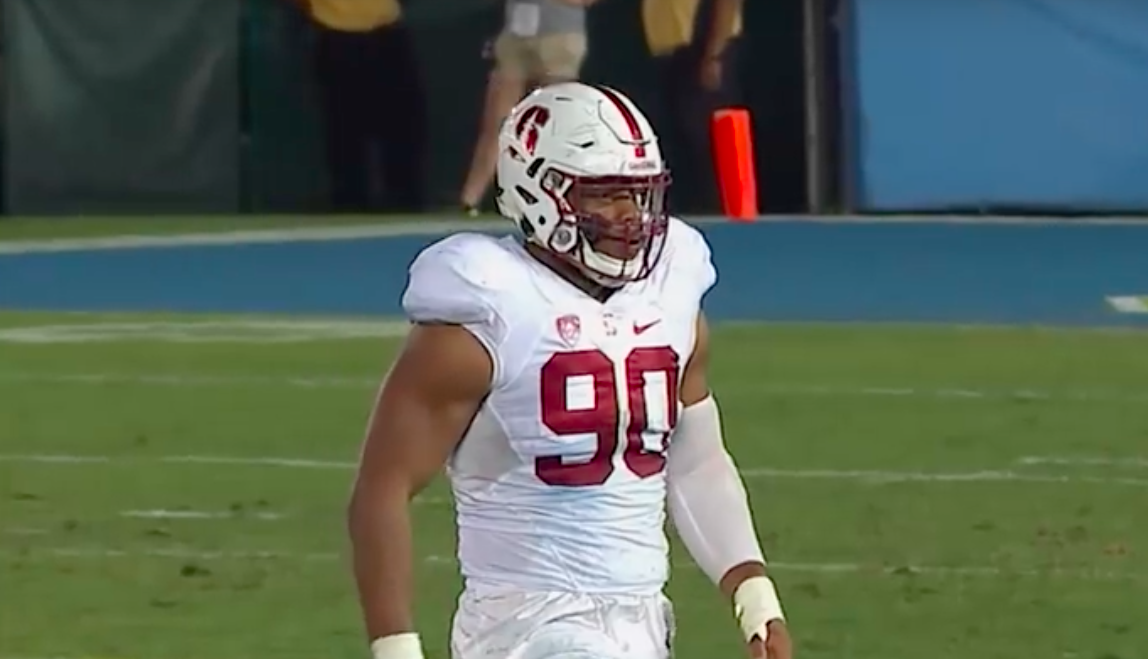 
Well it's the week of the NFL Draft, so that means there is a lot of #fakenews going around. In this sure-to-be-completely-wrong mock draft, I try to take the seemingly true rumors and smokescreens into account, along with how I personally think particular NFL teams may view certain guys.

Not even Adam Schefter eye emojis in the middle of the night (less than 24 hours until the draft) changes things. Garrett has been the favorite to go #1 for months, and there’s no reason for Cleveland to change that. The Browns get a potential franchise-changing pass rusher for their new defense under DC Gregg Williams.

This pick is likely coming down to Jamal Adams and Solomon Thomas, but GM John Lynch favors the safety to help out the back-end of the defense. Lynch probably loves Adams’ leadership and how it fits into a talent-deficient locker room.

Do not be surprised if Deshaun Watson is the pick here, but Chicago could have Thomas at the top of their board as a dominant piece to add to the front-seven. Thomas and 2016 first-round pick Leonard Floyd are a scary duo.

They could use a little more help on the offensive line, but Jacksonville has almost all the pieces to be a real contender in the AFC South. Drafting one of the greatest winners in college football history will install the type of winning culture that Tom Coughlin wants, and the 70-year old doesn’t have time to experiment with Blake Bortles for another season.

The Titans and Hooker are the perfect fit for each other, especially after Tennessee signed the physical safety Jonathan Cyprien in free agency. Hooker will be able to man centerfield, which he did last season at Ohio State when he had seven interceptions and took three to the house.

I think the Jets are going to want to build up the rest of the roster before taking their quarterback of the future (Sam Darnold in 2018?), and O.J. Howard could be at the top of their board. Plus, he fills a huge position of need, which is obviously the perfect combination.

The now-LA Chargers could use a little excitement to win over the Los Angeles market, and getting a clutch performer and the top receiver on the board should do just that. The Chargers have met with Williams recently, and Philip Rivers likes throwing to big targets.

On the surface, Leonard Fournette seems like the better fit, but as a guy that ran out of both the spread and multiple tight end sets at Stanford, McCaffrey is exactly what the Panthers want offensively. He has experience running power out of the gun and would also be a versatile weapon out of the backfield for Cam Newton.

Cincinnati typically goes with the best player available, and that is most likely Fournette if things play out like this. Jeremy Hill has struggled with injuries and efficiency since dominating as a rookie, and he will be a free agent in 2018. Marvin Lewis needs to get back into the playoffs, and taking an elite runner like Fournette could get them there.

Lattimore could be drafted higher than this now that his teammate Gareon Conley is sure to drop, leaving one fewer first-round cornerback, but the position is so deep that teams could still be content with waiting. Replacing Stephen Gilmore is a priority for new head coach Sean McDermott.

I don’t buy the Browns wanting to move up for Trubisky, but that might just be because of my positive feelings towards Cody Kessler. The Cardinals owner, GM, and head coach had dinner together with Trubisky, so despite Bruce Arians expressing concerns about a one-year starter, they clearly like him enough to consider him. The former Tar Heel would benefit greatly by sitting for a year behind Carson Palmer.

With all the talk about teams in the top-eight wanting to trade down and the Browns wanting to trade up for Mitchell Trubisky, I think it’s all smoke for Cleveland to get someone else to move ahead of them for a quarterback (or just take a quarterback), leaving more position players on the board here. If that’s the case, David Njoku is a high-upside weapon that doesn’t turn 21 until July.

I could see the Saints choosing between Reddick and Lousiana’s own Tre’Davious White, but they saw the impact a playmaking linebacker can have on the team when rookie Deion Jones was all over the field for the rival Falcons last season. They can’t go wrong with either guy.

It could be a smokescreen, but a lot of people close to the team believe Cook is the pick here if McCaffrey is gone. Plus, I’m not sure who the team would be trying to trick here, as Cook’s stock seemed to be dropping rather than soaring back to the top-half of the first-round. Former Eagles back and current running back coach Duce Staley is said to want Cook, and the team will undoubtedly be trying to help Carson Wentz the best they can. A trade down would be great, but it’s not possible to know if Indy likes Cook enough to take him 15th.

Indy has an abundance of needs on defense, and they get an instant boost to the pass rush with Charlton, who fits just as well as an outside linebacker in a 3-4 as he does in a 4-3 as a defensive end, and will have no problems stopping the run. Cornerback is another option, but they’ll wait on that position in a deep class.

Ozzie Newsome loves to stay put and take the best player available, and if they are okay with Foster’s character, he could be an absolute steal. Some people thought Foster was the second-best player in the draft at one point, and the Ravens can fill the void left by Zachary Orr’s retirement.

The Redskins could stop the slide of another player who was once considered the second-best player in the draft, as Jonathan Allen could very well be the best player on the board and fill a position of need. If not for medical concerns, Allen would go higher than this (and he still might).

Jon Robinson got a playmaking centerfielder in the top-five, and now gets Marcus Mariota a much-needed weapon with their second first-round pick. Ross running deep on play-action will be a huge weapon in Tennessee’s offense.

White would be the steal of the draft if he is available here, and could provide a dominant cornerback duo with 2016 first-round pick Vernon Hargreaves in the NFC South. I think White will turn into an elite, top-line corner soon enough.

Ramczyk is the first of at least a couple offensive linemen that Denver will likey add in the draft, and he profiles as a solid left tackle for years to come. The Broncos don’t have to worry about protecting an injury-prone Tony Romo, but their inexperienced signal-callers need to be protected to develop smoothly.

Detroit desperately needs a pass rusher to pair with Ezekiel Ansah, and Barnett is a solid sidekick as a technician. I could also see them going with cornerback Marlon Humphrey from Alabama.

The Dolphins might go with linebacker or pass rusher here, but Adam Gase could really try to build the offensive line in year two, adding another high-level talent to pair with Laremy Tunsil. Jay Ajayi would like this pick.

I think this is sure to be a linebacker, and will probably come down to Cunningham or Jarrad Davis. Cunningham was all over the place for the Commodores in the SEC.

Speaking of Jarrad Davis, the Raiders scoop up the talented linebacker to patrol the defense behind Khalil Mack and company. Like many other teams, they also need help at cornerback, but can afford to wait with this class.

Jay Cutler is the best option for Bill O’Brien if the Texans are going to be real contenders in 2017 (unless Tony Romo changes his mind). That said, Houston needs a long-term solution at quarterback, but Mahomes will need at least a year—and probably more—to learn O’Brien’s offense.

Tankersley could be Richard Sherman’s replacement whether or not the team trades him, as the Clemson product has the size, speed, length, and production to be a legitimate shutdown corner in a cover-3 defense.

The Chiefs could use another corner opposite Marcus Peters, and the 20-year old Humphrey carries some nice upside and will not be asked to cover top receivers as a rookie. Plus, he’s not afraid to get his nose dirty and make tackles.

Dallas needs pass rushers and secondary help, but a bolstered pass rush could make the cornerbacks look a lot better. Harris isn’t great against the run, but teams probably love his potential as a pass rusher.

Between Watt and Takk McKinley, the Packers have a tough choice here, but they lean towards the guy who played his college football at Wisconsin. This will probably be the area teams start considering Joe Mixon, but I think Green Bay likes Ty Montgomery enough to feature him.

The Steelers were previously a good bet to move up, but with Peppers diluted drug test hurting his stock, they can stay put for their guy. If they don’t feel comfortable spending a first-round pick on Peppers anymore, I think they’ll go with wideout Chris Godwin.

I like McKinley more as a stand-up outside linebacker in a 3-4, but Dan Quinn should have no problem coaching the raw prospect up as an explosive end to pair with Vic Beasley in the pass rush.

After trading down and still grabbing Haason Reddick at pick 13, the Saints get another dynamic player in Adoree’ Jackson, who will make an impact on defense and as a returner. This is expected to be a hot trade-up spot for teams that potentially want a quarterback.