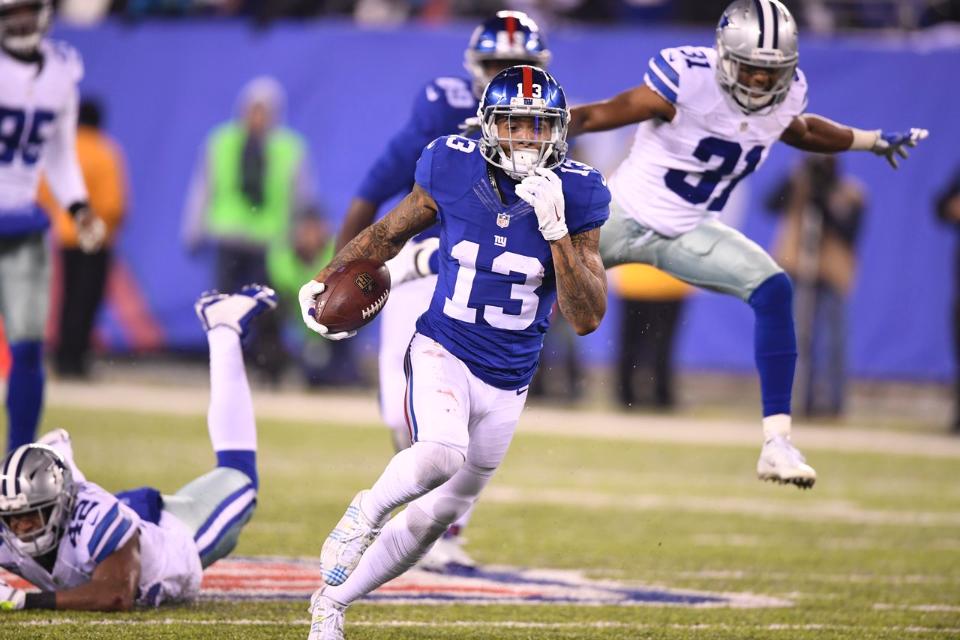 
The New York Giants introduced their 18th head coach in team history today when Pat Shurmur met the media. If you just look at him, you might be surprised by it, but Shurmur was actually a center at Michigan State. He and GM Dave Gettleman will certainly bring a toughness to this team, and they indicated today that they share the same vision for the team: a tough, hard-nosed one that can run the football.

Shurmur said star receiver Odell Beckham Jr. is a guy he knows the team must get the ball to, and he noted that Beckham was very high on Philadelphia’s draft board in 2014 (Shurmur was the offensive coordinator with the Eagles). However, Beckham has since become known as one of the NFL’s biggest divas, and there is some discussion that’s emerged in recent months about potentially trading the perennial 1,300-yard receiver.

Much of the discussion stems from Dave Gettleman’s time in Carolina as their GM, as he removed the franchise tag from cornerback Josh Norman after Norman didn’t sign a long-term deal and waited to sign the tag. OBJ has already said he wants to be the highest-paid player in the NFL, which is not going to happen. But Beckham is going to want a lot of money, and Gettleman is not going to build his team by paying a receiver $20 million/year. I am not saying it’s going to happen, but there are some realistic trade scenarios out there if the Giants do decide to part ways with Beckham.

Cleveland has the easiest and most realistic path to acquire OBJ. They have a ton of draft capital including two top-five picks in this year’s draft, so any trade could easily start with that fourth overall pick (via Houston). Also, they have three second-round picks (their own, Houston’s, and Philadelphia’s), making them able to make a near-godfather offer if they so choose. The Browns might not be willing to give up this much

T.Y. Hilton and Odell Beckham Jr. on the outside would be a lethal combination, and because the Colts roster is in bad shape, they have the cap room to get it done. There is no way Indianapolis would want to trade its third overall pick for Beckham, but perhaps they’d be open to moving their first rounder in 2019 with the hope of Andrew Luck lifting the team to a pick in the 20s rather than the top five or ten.

Chicago invested a lot into quarterback Mitchell Trubisky, and the next step is to get as much help as possible around him. With the eighth pick, they could get a weapon like Alabama’s Calvin Ridley, who looks like a sure thing, but Beckham would give them an instant explosive number one receiver. The Giants are looking to build the offensive line, so Kyle Long is an option despite his big contract and impending offseason surgeries.

This is with the expectation that Larry Fitzgerald retires, which would mean their receiving group needs a revamp to help whoever is under center next season. The Giants can get out of Janoris Jenkins’ with about $6 million in dead cap, but they might prefer to get him off the books entirely via a trade. Arizona does have a ton of money in the secondary already, but they do have a good amount of cap space with the cap going up each year.

The Jets have shown they want to upgrade the receiver position, selecting ArDarius Stewart and Chad Hansen in the third and fourth rounds of last year’s draft before trading for Jermaine Kearse ahead of the regular season. OBJ would clearly give them a big-time number one receiver that would make it easier for the young guys to fill in as complimentary pieces. The team has plenty of cap space to get a long-term deal with Beckham done.

This is all speculation. Ultimately, the Giants might decide they want even more than this to trade their star receiver. Or they might decide they won’t need more than around a first-round pick in return if they decide they’re better off without him on the roster. Until Beckham inks a long-term deal with the team, the speculation is merited with a new regime in charge.