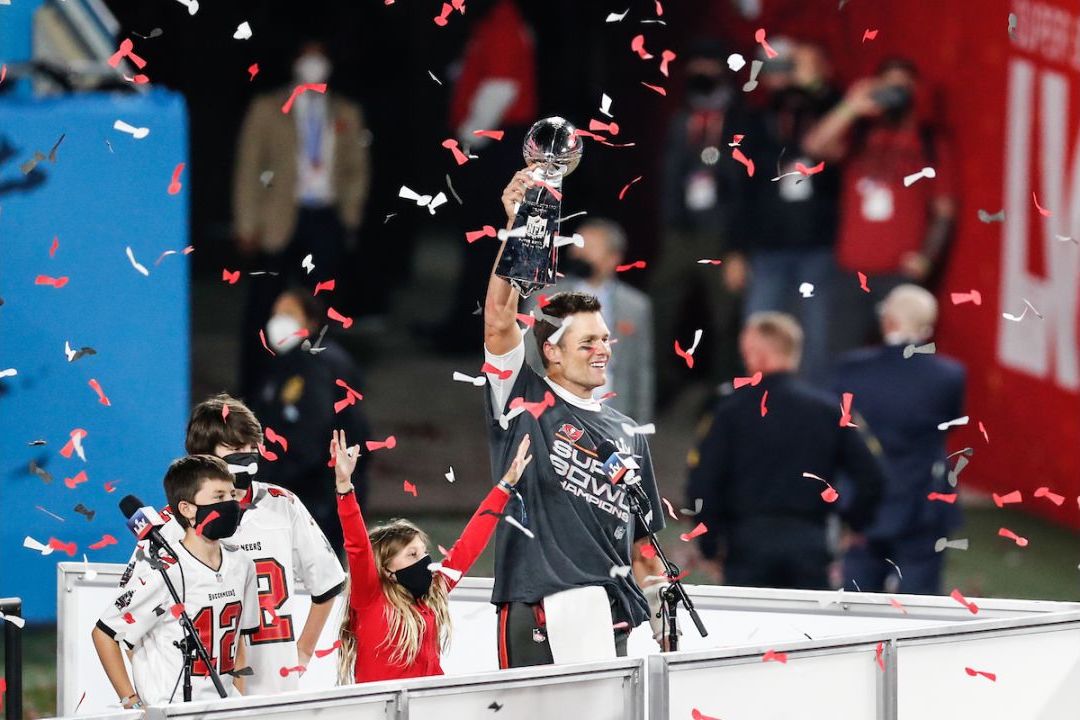 G.O.A.T. Of G.O.A.T.s Tom Brady Is Still Here And Still Not Done


Congratulations to the Tampa Bay Buccaneers on winning Super Bowl LV. From Tom Brady to Bruce Arians to Devin White to Todd Bowles and more, the Bucs were a pretty easy team to like and be happy for. To be clear, Tampa Bay was an awesome team with stars all over the field, and winning a championship is not about just one player. But this article focuses on Brady, who the entire Buccaneers organization will say raised the level of everyone and everything when he joined them last year.

In recent years, the tide has seemingly turned in favor of public opinion holding Brady in very high regard, partly because it’s been impossible to deny his excellence and partly because it’s hard not to like him personally when you get past some the negative media hating on him for whatever reason. Growing up as an Eagles fan, there was even a stretch where I didn’t like him; then there was some moment where he got a first down or something during a game and was extremely fired up—it’s obvious how much he cares and competes—and I and some friends were like, “why don’t we like this guy?”

Brady has probably won a lot of people over through the years, and he isn’t someone you doubt. After winning ring No. 7, it’s not crazy to think he might actually win No. 8, No. 9, or No. 10. He defies age and gets better with more experience, thanks to his unmatched commitment, the TB12 Method, and his past-master-level mental ability. After Brady’s fourth Super Bowl title I thought he was the greatest athlete ever, and his fifth championship in the stunning 28-3 comeback set it in stone for me; since then, Brady has added two more titles while switching teams. You don’t need me to elaborate on how mind-blowing all this stuff is by writing a long piece—this isn’t about a writer, it’s about Brady—so I’m just going to dive right into some of his career highlights thus far, with more almost certain to come.

His seven Super Bowl wins is more than any NFL franchise.

Brady switched conferences, adjusted to a new city, coaches, and teammates during a pandemic, and won a championship in his first season with his new team.

The Buccaneers had the worst winning percentage in NFL history, but Brady joined the franchise anyway and won immediately.

He’s the only quarterback in league history to win the Super Bowl in both conferences.

Brady has been to ten Super Bowls total.

Each of his three Super Bowl losses were by one possession and in nail-biting fashion.

In his most recent Super Bowl loss (LII to the Eagles), Brady threw for a Super Bowl record 505 yards.

His 264 career wins (including playoffs) are currently 64 more than second place (Peyton Manning).

He has 34 playoff wins, including 17 wins in conference championship games and Super Bowls. Joe Montana is second all-time in playoff wins with 16.

Brady has 21 touchdown passes in Super Bowls. Joe Montana is second with 11.

Brady has 14 game-winning drives in the postseason. John Elway is second with six.

Brady has six game-winning drives in his seven Super Bowls.

He brought the Patriots back from a double-digit fourth quarter deficit to beat the Seahawks and the “Legion of Boom” defense in Super Bowl XLIX (sealed by the Malcolm Butler interception) to win his fourth Super Bowl.

Brady led the greatest comeback in NFL history when the Patriots came back from down 28-3 in the third quarter to beat the Falcons in Super Bowl LI to win his fifth title.

Brady has thrown for the most passing touchdowns in NFL history (581 in the regular season, 83 in the postseason—both records).

He also one of three quarterbacks in NFL history to throw for 50 touchdowns and led one of the two undefeated regular season teams in the Super Bowl era, both in 2007.

And as Brady has said in the past, his favorite Super Bowl ring is “the next one.” His relentless pursuit of greatness has brought him to heights that arguably no athlete has reached or will ever reach in the future. We’re all lucky to be able to stake claim to be watching the true greatest of all-time.

As was the case a few years ago, and as he matter-of-factly stated when asked about his playing future last night, Brady’s not done yet, either. So, appreciate this while it lasts.