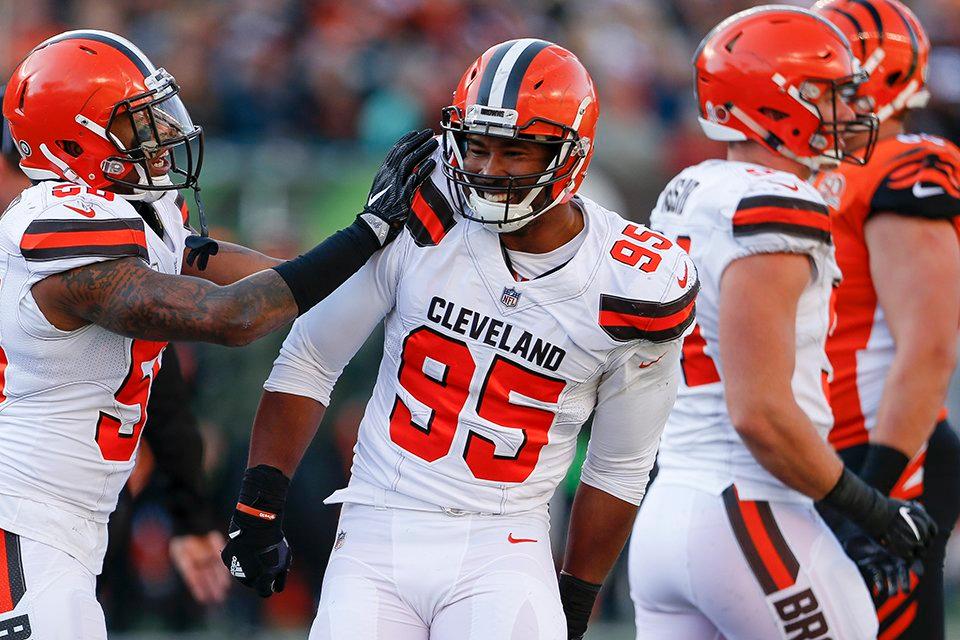 
If you could have any job in the sports world, what would it be? General manager of the Lakers? Head coach of the Steelers? Shortstop for the Yankees?

Those are all great options and everyone will have their own personal pick, but I don’t think there’s a better job out there right now than GM of the Cleveland Browns.

Yes, the Cleveland Browns. And it wouldn’t be about saying you brought a winner to the city or you’re the guy that turned the franchise around; it’s because the team has something that’s basically unheard of for a non-expansion team—a clean state.

First, let me just say that Hue Jackson’s presence after going 1-31 over two seasons definitely makes the job less desirable if owner Jimmy Haslam doesn’t let you get rid of him (which was the case with new GM John Dorsey), but perhaps Haslam could be convinced that it would be beneficial for the young talent to get a fresh start.

At worst, Jackson could probably be replaced in 2019, so some potential targets for head coach either this offseason or next offseason include John DeFilippo, Jim Harbaugh, John Harbaugh, and Chip Kelly. The franchise is being talked down by media members, but I think smart football minds would see the building blocks Cleveland has in place and consider the job one of the best available.

I mentioned the team has a clean slate, and that is thanks to the work of former VP of football operations Sashi Brown. The “Moneyball” executive was fired in December, but it’s pretty clear that he simply lost a power struggle with Hue Jackson so that the head coach could save his own job. Many big-picture Cleveland fans were livid on Twitter when it was announced that Brown was canned and Jackson was keeping his job, calling the head coach a “snake,” among other things.

It’s very similar to what happened to Sam Hinkie with the Philadelphia 76ers, as he acquired a bunch of young talent and draft picks that he will never see come to fruition. Some might be laughing at the notion that Brown did a great job in his short time with the Browns, at least one NFL team thinks otherwise.

After a 38-24 win over Cleveland in November, former Lions head coach Jim Caldwell said about their opponent, “It’s very difficult to play a team that everybody thinks doesn’t have players. That team has players.”

Former All-Pro safety Glover Quin continued that sentiment, saying they “probably” have more athletes than 25 teams in the NFL, adding, “They’ve got a lot of first-round draft picks. They’ve got talent. They just haven’t won a bunch of games. Don’t sleep on them.”

Those first-round picks Quin was talking about included three from 2017 (Myles Garrett, David Njoku, and Jabrill Peppers), and they had plenty of other solid draft selections under Sashi Brown, including Corey Coleman, Emmanuel Ogbah, Carl Nassib, Shon Coleman, Cody Kessler, and Larry Ogunjobi. So what else makes this job the best in sports?

Well, the first- and fourth-overall picks in this April’s draft isn’t a bad start. They also have three second-round picks (No. 33, No. 35, and No. 63) and a pick at the top of the third round (65th overall). The Day 3 picks shouldn’t be overlooked either, as the Browns have two fourths, two fifths, one sixth, and one seventh in what I think is a deep draft class.

Oh, and the franchise also has well over $100 million in cap space to spend in free agency. I would feel a lot better about the job if Hue Jackson wasn’t around, but a turnaround similar to what Dorsey did in his first year with the Chiefs (11-5 record after a 2-14 season) isn’t out of the question.

And the job is so great because the team can be built however you want. There will be several quarterback options in free agency—Kirk Cousins, Sam Bradford, Teddy Bridgewater, Case Keenum—and a handful of quarterback prospects to consider with one of their top-five picks—Josh Allen, Sam Darnold, Lamar Jackson, Baker Mayfield, Josh Rosen.

It’s almost a can’t-miss opportunity. Cleveland already has an above-average offensive line, a star middle linebacker in Christian Kirksey, a top-end backup quarterback in Cody Kessler (despite Jackson not giving him any chance to play in 2017), and two studs along the defensive line in Myles Garrett and Danny Shelton, among other pieces.

One of those other pieces is literally a Hall-of-Fame talent in Josh Gordon (if he can stay out of trouble). And 2015 first-round pick Corey Coleman could be a difference-maker across from him at receiver if he can stay healthy. Plus, tight end David Njoku was one of my favorite players in last year’s draft, and he has a bunch of upside as both a pass-catcher and blocker.

They obviously need a quarterback, but I would take Penn State’s Saquon Barkley with the first pick and not think twice about it. Barkley is a generational player that would give them the best young skill-position group in the NFL and make the job of whoever plays quarterback a lot easier.

I don’t want to get too deep into what I would personally do, but going after Sam Bradford in free agency and then drafting the best player available at fourth overall (even if it’s a quarterback) seems like a best-case scenario. Bradford is an elite talent when he’s healthy, and being successful from the pocket is what’s needed to win in January (see: Tom Brady every year).

That’s just two picks and not even discussing free agency, so it should be easy to see what the Browns have to work with this offseason. The team should be able to add at least five new starters in the draft and perhaps the same number in the open market. Also, the young talent will only get better in 2018 with a year or two of experience under their belt.

We’ll see how Dorsey molds the team with a huge ball of clay to work with, but if anyone has a few billion dollars to spend, now might be the time to make an offer for the Cleveland Browns.