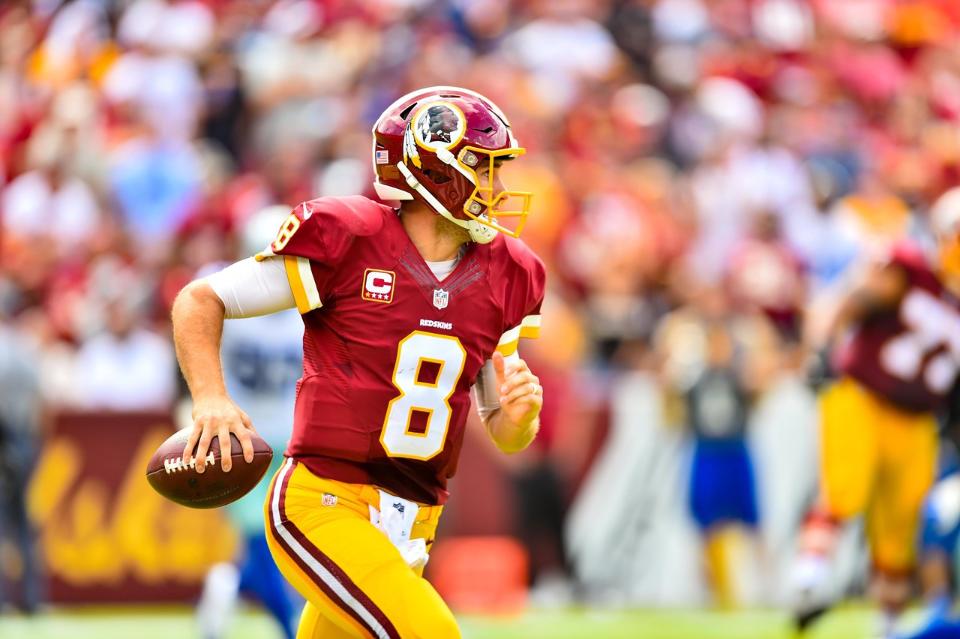 How Kirk Cousins Threw A Wrench In The Quarterback Market


Say this for Kirk Cousins: He keeps you guessing.

There are few quarterbacks whose career trajectory has been as strange and unpredictable as Cousins’. The Michigan State product was little more than an afterthought when Washington took him at the beginning of the fourth round in 2012, planning to groom him as a backup for presumed franchise quarterback Robert Griffin (taken exactly 100 picks earlier in the same draft). For three years, Cousins was basically a replacement-level quarterback who couldn’t protect the football; after his famous “You like that?!” game against Tampa Bay in October of 2015, he suddenly transformed into a franchise player. Cousins had posted an interception rate of 4.3% up to that point; since then, it has shrunk to a measly 1.6%. He began protecting the ball, and all the sudden Washington began winning games.

At the end of the 2015 season, Cousins looked set up to sign a lucrative long-term contract extension; to everyone’s surprise, he elected to play out the season on a one-year franchise tag instead. To many, it seemed like a foolish risk to take—coming off of what looked like a flukey half-season of incredible play that he was unlikely to replicate again (based on how he had played for most of his career up to that point), Cousins’ market value was the highest it had ever been. By taking a one-year deal, he risked regressing to his former level of play and significantly lowering his stock before hitting free agency again. But Cousins’ bet on himself paid off—his 2016 campaign proved resoundingly that his sudden improvement was no fluke, and now he’s in line to become possibly the highest-paid signal caller in the NFL.

And now for one more twist: according to the nonstop churning of the NFL rumour mill, the negotiations between Cousins and the Skins have hit a standstill. Cousins wants more money than Washington is willing to pay, and he has as much leverage right now as he ever has. Washington has placed the second-year franchise tag on him and can at least force him to stay for another year, but after 2017 they won’t have many options for keeping him around—the third-year franchise tag for a quarterback would bump his salary up to over $34 million, which is an untenable amount to dole out to any single player in a salary cap league. If Washington doesn’t want to pay Cousins what he considers himself to be worth, then their best option is to trade him now so they can commit that money to a new solution under center. Rumours are already swirling that the 49ers could be a potential suitor—their newly minted head coach Kyle Shanahan was Washington’s offensive coordinator when his father Mike drafted Cousins in 2012, and some in the quarterback’s camp have suggested that he wants a reunion with his former mentor. That would certainly solve the most pressing problem for the 49ers, who will be going into free agency without a single quarterback under contract since Colin Kaepernick opted out of his deal.

The most interesting thing about situations like this is the ripple effects they cause in the league-wide market. This offseason already promised the most intriguing quarterback market in years, with a number of big names potentially available. Tony Romo is on his way out of Dallas, and Jay Cutler’s tenure in Chicago looks to be at an end. Kaepernick declined his option and will hit free agency, and Tyrod Taylor has seemingly worn out his welcome in Buffalo. On the other side of the table, teams like Denver, Houston, Cleveland, Buffalo and Chicago could all be in the market for new signal callers. If a Cousins trade to San Francisco really does go down, it changes the landscape for everyone else in the quarterback market.

That starts with the Denver Broncos, who looked like they would be in the driver’s seat of the quarterback race before the Cousins drama began to boil over. The Broncos have $44.4 million in cap room and a deep, talent-laden team just one year removed from winning the Super Bowl. Denver has been cagey so far on their quarterback plans, with GM John Elway and head coach Vance Joseph suggesting that they would be happy to go into camp with just their two incumbent quarterbacks, Trevor Siemian and Paxton Lynch. But if Denver did decide to dip a toe in the market, they would offer a very desirable landing spot for whatever player caught their eye (they have been linked repeatedly to Romo, and they also expressed interest in Colin Kaepernick last year). However, the emergence of Washington as a quarterback suitor could undermine Denver’s status as the big player on the market—the Skins can boast $64.5 million in cap room if Cousins’ franchise tag comes off the books, more than enough to make a Godfather offer to someone like Romo if they so desire. The typically stingy and cap-disciplined Broncos could be put in a position where they have to offer more money than they feel comfortable committing to get the player they want, which could take them out of the market entirely—John Elway is known for walking away when a player isn’t willing to meet his terms. Denver has long been presumed to be the favorite destination for Tony Romo if they want him, but Washington would stand a better chance than any other potential suitor of prying him away from the Broncos (and how fun would it be to see Romo land in the NFC East, where he’d be suiting up against the Cowboys twice a year?)

Other than the Redskins and Broncos, Houston is the only quarterback-needy team that has the talent to be an immediate playoff contender. Unfortunately, they already have big money committed to a quarterback…albeit one they don’t want. The $18 million a year they have committed to Brock Osweiler severely limits Houston’s flexibility in free agency—the arrival of Washington on the market will likely limit their options even further. Houston may be able to get a discount on a veteran like Jay Cutler who wants to contend for titles right away, but like Denver, their path to a signal caller gets more complicated if Washington and their piles of cash decide to step in. As for the slew of other teams in search of new blood under center (such as Buffalo, Chicago, Jacksonville, Cleveland and the Jets, to name a few), most of them are years away from contention—any chance they had at landing a top QB is probably gone if Washington elects to go shopping.

A Cousins trade could also shake up the landscape come Draft Day. San Francisco owns the second overall pick, and many around the league thought they had their eye on Tar Heels quarterback Mitch Trubisky. If the Niners swing a deal for Cousins, they certainly won’t be using that pick on a quarterback. They could opt for a defender like Jonathan Allen or Myles Garrett, or they could dangle that pick in hopes of getting a haul similar to what Cleveland extracted from the Eagles for the number two pick in 2016 (the Browns came away with two first rounders, a second, a third and a fourth). They would be helped by the fact that the Bears are picking next at number three—Chicago will be looking for someone to replace Jay Cutler (assuming they do cut bait on him, as most people around the league expect), so if a team drafting lower on the board has fallen in love with Trubisky or Clemson product DeShaun Watson, they may feel compelled to offer up a king’s ransom for San Francisco’s pick to keep the Bears from grabbing their guy. If the Niners play their cards right, they may just end up with both a new franchise quarterback and a big pile of assets that they can use to surround him with talent.

It’s hard not to feel a little bit of sympathy for Washington at this point—they just can’t seem to get out of this nonstop quarterback soap opera. First they thought they had found their man with RGIII, only to see him flame out spectacularly after a single brilliant season. The surprising ascension of Cousins ushered in a new era of optimism in Washington—and now, suddenly, Cousins is making a beeline for the exit. Unless Washington suddenly changes its mind about how much Cousins is worth to them, they look to be in for another offseason full of questions at the game’s most important position.