Home / frontnfl / If Ryan Tannehill Is Out, Jay Cutler Could Be The Answer For Miami 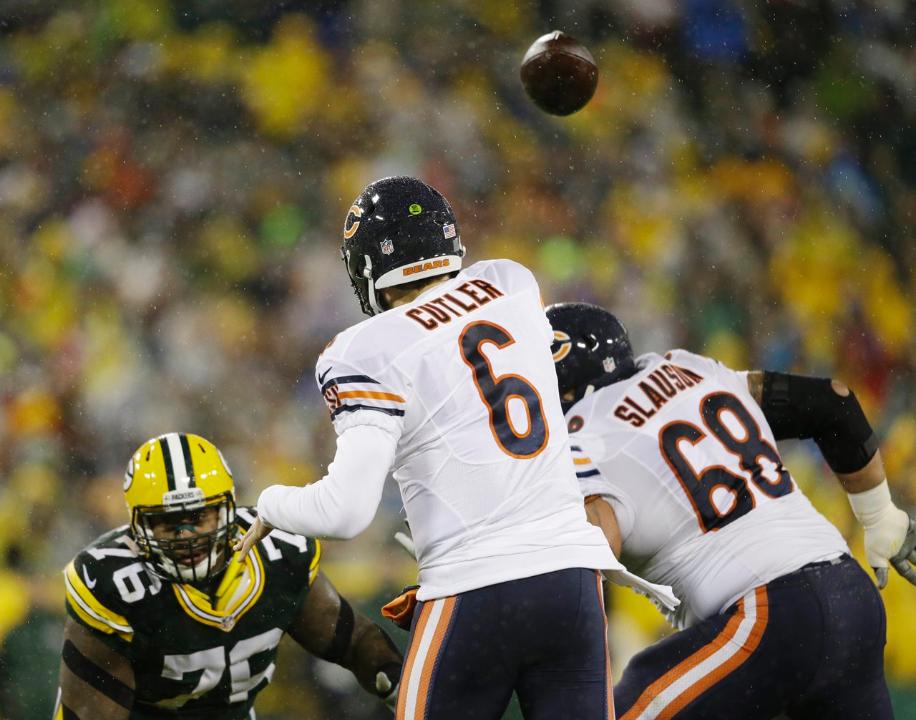 If Ryan Tannehill Is Out, Jay Cutler Could Be The Answer For Miami


Dolphins quarterback Ryan Tannehill went down in practice today with a non-contact injury, and the early indications are not good for the 29-year-old. This tweet by the Miami Herald’s Armando Salguero paints a pretty good picture on how fans feel after their starting quarterback went down.

There are approximately 2000 fans here. The Dolphins are on the field making plays. And no one is cheering or clapping since Tennehill left.

We don’t know the extent of the injury, but we do know it’s to his left knee—the same one he partially tore his ACL in last December. Tannehill declined to get reconstructive surgery, instead opting for stem-cell treatment and other methods. He was said to be 100%, but whether or not that was true, he doesn’t appear to be anymore after today’s practice. And now Miami needs a quarterback.

Immediately after news broke about Tannehill’s unfortunate injury, “social justice warriors” swarmed Twitter with joy over a potentially serious injury because they think Colin Kaepernick will be signed by the Dolphins. I won’t give any of those sick individuals the benefit of posting their tweets on this article, but they should be in for a disappointment, as there is almost no chance the Dolphins sign Kaepernick.

If you don’t remember, last year Kaepernick was booed when the 49ers played in Miami for his pro-Castro comments and wearing a shirt with the Cuban dictator on it. There probably isn’t a place in the world that hates Fidel Castro more than Miami, as the city is home to many immigrants who have escaped the Castro regime.

Besides that, the on-field fit just isn’t there. Dolphins head coach Adam Gase runs a complex system that requires an accurate quarterback to be successful. Kaepernick owns a career completion percentage of 59.8%, and it was even lower in 2016 (59.2%), despite Chip Kelly’s ability to consistently scheme guys open. If you have the ability to, go back and watch the games—the film shows poor play from Kaepernick, despite a 16:4 touchdown-interception ratio. Yet, “journalists” on ESPN or NFL Network still vouch for Kaepernick for one reason or another.

The player who the Dolphins should target is in the broadcast booth. And it’s not Tony Romo… it’s Jay Cutler.

Cutler was my top free-agent quarterback way back in March, but he retired after no desirable opportunities arose for him. Now with FOX as a color commentator, the former Bears and Broncos quarterback seemed to shut the door on a return a little more than Romo did. However, there were comments he made on an Adam Schefter podcast that show this is the perfect opportunity, and the only one he would come out of retirement for. Cutler said:

“To say ‘Hey, we’re going to sign you on Monday we need you to play on Sunday’ as a quarterback, that’s so challenging. I think Tony’s situation with possibly leaving the door open in Dallas if that’s what he’s doing is a little bit more realistic because he knows the system, he knows the guy, he knows expectations, he’s comfortable in the building. To go someplace completely foreign and try and learn a whole new system and develop timing with guys, especially on a team in a playoff race, that’s a tall order.”

Well, Cutler already knows the system in Miami, as Adam Gase was the offensive coordinator for Jay with Chicago in 2015. It’s pretty clear that if there is a spot Cutler will leave the booth for, it’s the Dolphins. And it’s just as clear that Gase believes Cutler is the top quarterback available to sign.

At the owner’s meetings earlier this year, Gase said about Cutler, “I think he’s a starting quarterback in the NFL,” adding, “my experience with him was very good. I don’t get all the hatred towards him.” Among many other compliments, Gase also said, “I love Jay, but I do like the situation we’ve got going on right now at our place.”

There is still no confirmation on an injury for Tannehill, so hopefully he is OK, but it looks like the situation has changed for Gase and the Dolphins.  Fortunately, media members don’t make the decision on who to sign and who to play at quarterback, and Gase—who was in the building and actually coached Cutler—does. He also said this earlier in the year, “I think a lot of things that have been said about [Cutler] in the past have really been [BS].”

Miami is a ready-made contender in the AFC, even if they might have to settle for second in the division behind New England. The team has an emerging roster on both sides of the ball, including a strong running game behind an above-average offensive line. With a field-stretcher in Kenny Stills, a reception-machine in Jarvis Landry, and breakout-candidate DeVante Parker, plus touchdown-scorer Julius Thomas at tight end, Cutler has the weapons to succeed if he joins the Dolphins.

If Tannehill is done for the year or an extended period of time, I suspect the 34-year-old Cutler will be the first call Adam Gase makes.