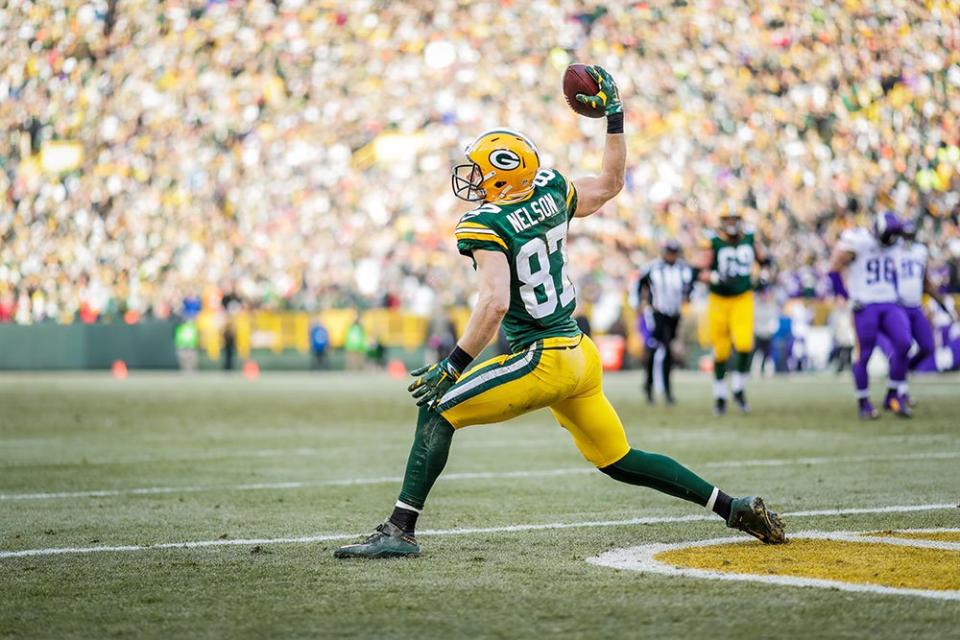 
Jordy Nelson didn’t make the Pro Bowl this year. He wasn’t an All-Pro. He didn’t catch 100 passes or lead the league in receiving. He missed a playoff game and his team won without him.

But Jordy Nelson might be the best wide receiver in the league, and he is without a doubt the most underrated. He might not have made the Pro Bowl, but he should have. He wasn’t an All-Pro, but he should have been. He didn’t catch 100 passes or lead the league in receiving, but he did catch 97 for 1,257 yards. And Green Bay might have won a playoff game without him, but his toughness the next week was even more impressive than the Packers’ win over the Cowboys.

Oh, he also led the league in receiving touchdowns. For whatever reason, Nelson is never talked about as a top-five wideout, but that’s exactly what he is. Here are Jordy’s stats since becoming a starter.

Now, this is not to say Jordy is better than Julio, but they are not too far apart statistically. That is especially true—perhaps making Jones a bad comparison—because Nelson and Jones have a lot of similar qualities (toughness, team-player, willing blocker, hard-worker, unselfish, etc.). Be the judge yourself, but there are definitely guys on both the NFC and AFC Pro Bowl teams that lack key intangibles that should be considered when talking about elite players.

More importantly, though, with the Pro Bowl being an individual achievement, many players who made it this year do not have the numbers to stack up to Nelson, either. Here are the season stats of the Pro Bowl wideouts, and Nelson’s:

With six guys making the Pro Bowl on first vote or as an alternate, that means the fans/players/coaches (the voters) view Nelson as no better than the 7th best wideout in the NFC. I’m sorry, but that is a complete joke. Nelson was third in catches, fourth in yards, and first in touchdowns. Remember, this was his first year back from a torn ACL, and he was given a lot of attention from opposing defenses.

In the first meeting with the Bears, they shaded coverage his way and doubled him in the red zone. What did it lead to? Davante Adams, Randall Cobb, and Ty Montgomery all caught 10 passes, while Nelson was happy to let them go to work while he was held to one catch.

In Week 16 against Minnesota, the Vikings planned to let star cornerback Xavier Rhodes shadow Nelson. When the game started, the other corners apparently had a different idea, thinking they could cover him, too. They ignored the gameplan early in the game and Nelson ended up torching them for nine catches, 154 yards, and two touchdowns. You can bet the Vikings gained a little respect for #87 after the Christmas Eve loss.

Since becoming a starter in 2011, Nelson is third in the league in touchdowns (57) behind just Dez Bryant (61) and Rob Gronkowski (58). Again, Jordy missed an entire season.

People might be thinking that another Pro Bowl snub for Nelson isn’t a big deal because the game has become such a joke—and he would have not played anyway because of his rib injury—but it hurts his Hall of Fame chances. He doesn’t have the accolades, but watch him play and look at the stats. Wouldn’t his chances be a lot better if he had a couple deserving All-Pro selections (he has zero) and at least a handful of Pro Bowls (he has one)?

Don’t make the same mistake as everyone else and underrate Jordy. Nelson’s elite production speaks (i.e. should speak) for itself, his character stands out in a “me” position (wide receiver), and he’s also been clutch (nine catches, 140 yards, one touchdown in his lone SB appearance, a win).

Why shouldn’t the former Kansas State walk-on be a Hall of Famer if he continues to produce? He played more in the slot down the stretch this season, which could help prolong his career. Let’s say he has three more seasons of 85 catches, 1,300 yards, and double digit touchdowns; there will have been no one with a better decade at wide receiver than Nelson. What if the Packers win another Super Bowl and he has another big game? All that could easily happen.

At least if he doesn’t leave a legacy with Pro Bowls, All-Pro selections, or a gold jacket, Nelson might be leaving an even more respectable legacy: what Green Bay fans and his teammates thought about him. Aaron Rodgers got emotional after last week’s loss to the Falcons in the NFC Championship when Nelson battled through two broken ribs—something Jordy described as the worst pain in his life—and an illness on two weeks’ rest.

Not only did he play, but Jordy was productive with the injury, catching six passes for 67 yards and a score. If Nelson gets a vertical game again in the second year back from his torn ACL, the football world could have no choice but to respect one of the best players in the game.