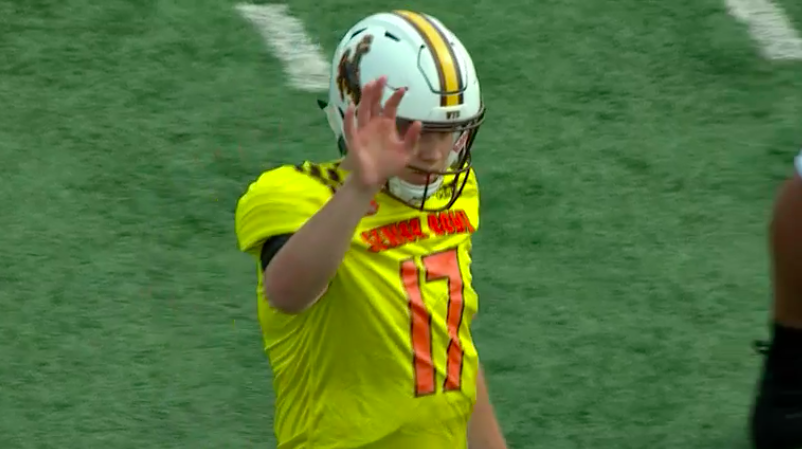 Josh Allen Has An Absolute Cannon


The week of the Senior Bowl started on Tuesday with team practices, and the North and South teams continued that on Wednesday and will conclude today before Saturday’s game. There are probably close to ten prospects that will be a Day 1 pick in April’s draft, but most have their eyes on the quarterback position with Josh Allen and Baker Mayfield for the North Team—and there’s been no bigger attraction than the right arm of Allen this week.

Let’s just start with context, here. The NFL Combine record for arm strength was set by Logan Thomas in 2014 with a 60 MPH throw, which broke Colin Kaepernick’s record of 59 MPH. For those who don’t know, that’s extremely fast for throwing a football (it’s a record, after all).

But then we had a kid from Texas Tech named Patrick Mahomes—Kansas City’s first-round pick last spring—show his insane arm strength on NFL Network last year in a throwing competition with former first-overall pick David Carr, which is worth the watch:

Carr is “only” throwing in the mid 50s, but you could just see that he’s slinging it, so for Mahomes to clock 62 MPH on his final throw was just nuts… and a new word might need to be invented for Josh Allen’s arm strength.

The top quarterback prospect, according to Zebra Technology, was clocked at over 66 MPH at yesterday’s Senior Bowl practice. That’s more than a 6% increase on Mahomes last year, and keep in mind that Allen was in full pads, which could have held him back some.

Just take a look at this short highlight package from this week so far, particularly the final throw, to see Allen’s arm in action.

Check out the best of @wyo_football‘s QB Josh Allen from @seniorbowl practice so far. ⬇

We might have a front-runner for the first-overall pick in the 2018 NFL Draft.