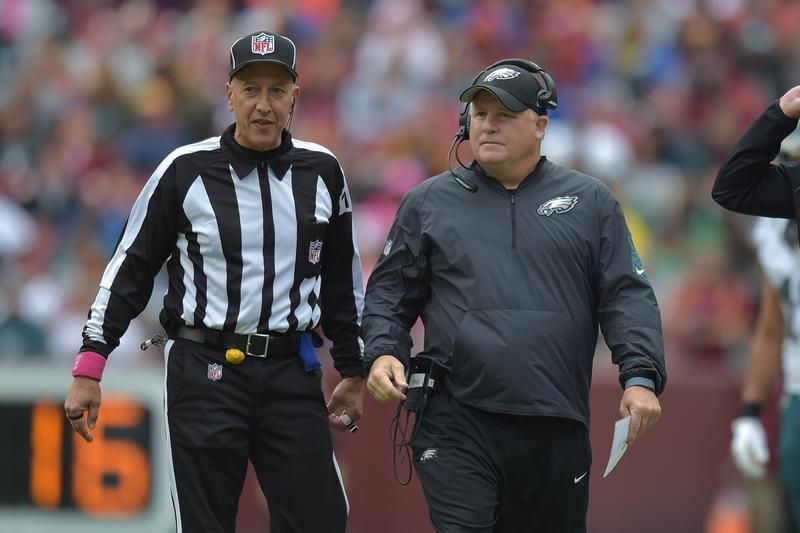 
The narrative from the media and fans, for some reason, has been that Chip Kelly is a “college coach,” or even just in general a terrible coach, despite people like Bill Belichick and Bill Parcells being supporters of his NFL career.

All-Pro safety Malcolm Jenkins, who played two seasons with Chip Kelly as his head coach, has a different opinion.

Jenkins was a guest on Dave Dameshek’s The Dave Dameshek Football Program, and gave great insight into his time playing for Kelly.

I mean, uh, contrary to belief, he’s actually a good coach. For me, at least.

He’s somebody who’s, I think, ahead of the curve when it comes to being able to take care of players. That’s one thing that he prioritized, was how do you—he understands that his program is demanding; that the pace that he demands, that the amount of reps. And so doing that, he understands that “alright, we have to take care of players’ bodies, so that they can actually even function at this kind of level.”

And so my first two—I played with him two years—in those two years, I had the most snaps of any player in the NFL. I probably played close to two or three games extra when you add up all the snaps that anybody else—and it was the best I felt my entire career. Because he is a nerd when it comes to sports science; like that’s his baby. And so, you know, I actually took a lot and learned a lot from him, from that. I think he’s a young coach trying to figure out how to make his new system fit in the traditional NFL.

Well I think it’s like anything, with, you know, when you come in to a league that is ever-changing, you gotta be willing to adjust and adapt. And I think that’s where his downfall has been, because I feel like his system actually could work if he adjusted it just a little bit. Because I know from—because I actually got to play against Chip Kelly, before I went to the Eagles. So the Saints, when I was with them, we went to Philly to play in a playoff game against the Eagles and we ended up winning at home. But that entire week, we were so worried about the tempo, and the pace, and a lot of snaps that we were trying to, like, go as fast as we could in practice to get used to it within a week. And so we wanted to be simple—we probably called three defenses the entire game. And I’m like, ‘when you—as an offense—when you know that defenses are afraid of you, and they can only call three plays for the entire game, that should be an advantage.’ But there’s one that when you go fast all the time, if it doesn’t work, it’s detrimental to your team. But when you understand that people have to adjust to that pace, all you have to do is change the pace. You can go fast, like they expect you to. And then after a while, you just slow it down and see. They’re going to show you—they can’t disguise, so they’ll show you exactly what defense they’re in. Have the offensive coordinator in the box radio down, change the play to whatever is gonna be the best play, and you’re always in a good position.

At the end of the conversation about Kelly, Dave Dameshek asked Jenkins: "Will Chip Kelly have the last laugh? Will he eventually win out, or do you suppose he’ll wind up at some point?" Jenkins was optimistic.

I hope he does, honestly. Cause I truly believe that he has something that can really change the face of this league, if applied correctly. So I really do hope that he has the last laugh. He’s one of those guys, he wants to win. He cares about everything that he’s doing. Had some success early, but like anything, the league will catch up. People adjust and you always gotta change what you’re doing, or, you know, make it better. So, I hope so.

Most notably, Jenkins said he “truly believes” his former coach “can really change the face of this league.” That sounds like extremely high praise from someone that knows first hand.

A common criticism of Kelly was that his fast-paced offense made his defenses too tired. Well, the guy that played the most snaps in the NFL during his two seasons with Kelly said it was the best he felt his entire career. Jenkins killed one of the biggest arguments of the anti-Kelly crowd.

New Eagles receiver Torrey Smith also had some great things to say about Kelly. Smith, of course, played under Kelly last season with the 49ers.

During last season, Smith, who won a Super Bowl under Ravens head coach John Harbaugh, said of Kelly: “I have been blessed to play for some great coaches and he’s right up there at the top.”

At his introductory press conference with the Eagles, Smith said this:

I love Chip. Chip is a great guy. I learned a lot from him. I know that might make some folks here mad, but I have nothing bad to say about Chip Kelly. I thought he was, offensively, I thought things he did that worked very well. I just always think with anything—no disrespect to coach Pederson—but I think it’s a players’ game. And sometimes as players when we execute, that call seems like the greatest play in the world, but when we don’t, everything’s terrible. So, I think it all goes together. But yeah I think Chip’s a great guy, great coach.

That says a lot, coming from a guy that probably did not have the season he would have liked last season (just 20 receptions for 267 yards). Another argument (“players do not like Kelly”) is debunked.

There’s no two ways about it: the 49ers had the worst roster in the NFL last season, and there was not much any coach could do to make a playoff push.

Looking back to his time with Malcolm Jenkins and the Eagles, his personnel moves were also good:

DeMarco Murray was third in the NFL in rushing with the Titans.

Kiko Alonso and Byron Maxwell were both integral parts of turning around the Miami Dolphins and getting them to the playoffs.

Sam Bradford threw 20 touchdowns, compared to five interceptions, and the best completion percentage in NFL history (71.6%) behind the worst offensive line in the NFL last season.

Jordan Hicks, Kelly’s third-round pick that was seen as a reach by many people, might be the best player on the Eagles.

People are writing off Kelly’s first-round pick Nelson Agholor, but 1) almost everyone saw him as a can’t miss prospect, 2) his issues are obviously mental (catching); he has a ton of athleticism and ability to get open, he just needs to overcome his mental hurdle, and 3) he’s entering his third season; here are Jordy Nelson and Demaryius Thomas’ stats through two seasons:

After going 20-12 in his first two seasons, the Eagles roster was revamped and Kelly was not given enough time to build a team the way he wanted, but there's evidence he would have got back to the winning ways. With the 49ers, he inherited a bad situation and really had no chance after owner Jed York decided to clean house.

But what are the legitimate arguments left against Chip Kelly as a competent—and potentially great—NFL head coach?

Kelly is out of work for now, but an NFL owner would be wise to give him another chance.