Home / frontnfl / Marcus Mariota Is The Next Great NFL Quarterback 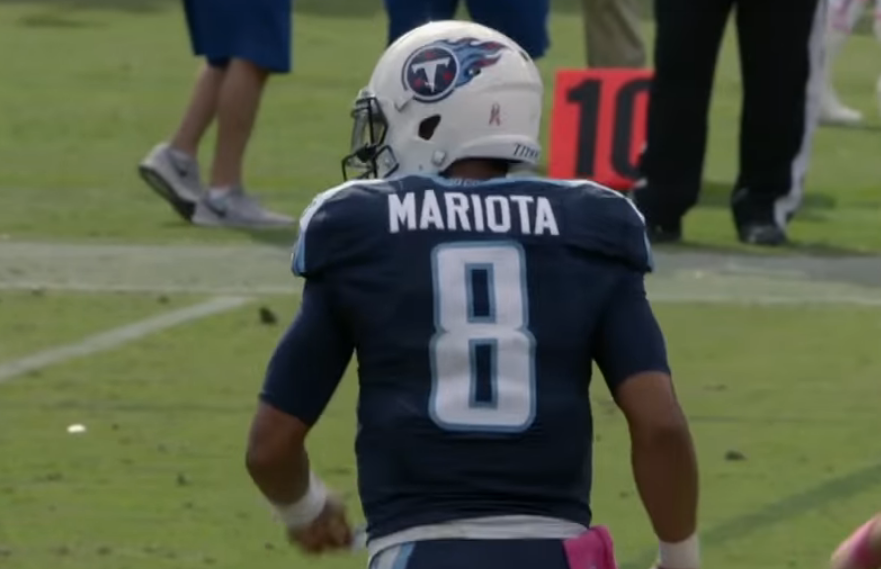 Marcus Mariota Is The Next Great NFL Quarterback

If you do not have a very good quarterback leading your team, it’s tough to win a championship. The past 14 Super Bowl winning teams had someone named Brady, Roethlisberger, Manning, Brees, Rodgers, Flacco, or Wilson at quarterback—all considered at least near-elite (Flacco and the younger Manning are certainly elite in the playoffs).

There are also great quarterbacks that have not won Super Bowls—Philip Rivers is arguably the most prominent current example.

Of all these awesome quarterbacks currently in the NFL, I believe there are two that stand out as truly great, all-time generational players: Tom Brady and Aaron Rodgers.

I believe the next quarterback to join Brady and Rodgers in the “elite of the elite” is Titans’ third-year quarterback Marcus Mariota.

Mariota will eventually be the best quarterback in the NFL. He’s only 23-years-old, so while Brady and Rodgers both have several years left—Brady is not a normal 39-year-old person, and he will play as long as he wants, in my opinion—Mariota will be the best in the league at some point, and it puts the Titans in an excellent position to win a Super Bowl.

From Andrew Luck to Derek Carr, there are a lot of excellent younger quarterbacks in the NFL, but Marcus Mariota stands out.

Mariota’s career passer rating through two seasons is 93.8. While passer rating is definitely not the perfect measurement of a quarterback, Mariota has a higher career rating than Andrew Luck (87.3), Derek Carr (87.9), and Jameis Winston (85.2). Russell Wilson—a Super Bowl winner that the argument can also be made for, as it can with others like Carr and Luck, being the best in the league at some point—has a career passer rating of 99.6.

Despite entering a bad situation on a 2-14 team, Mariota played well as a rookie. His coach Ken Wisenhunt was fired, and he dealt with a change at offensive coordinator heading into his second season, and the Titans improved from 3-13 to 9-7.

Additions like DeMarco Murray helped the change, but having someone like Mariota changes the culture of the team. His skills have been on display during his two seasons in the league.

Maybe the first thing that pops out when watching Mariota is his super quick release. It’s a compact release, almost like a dart-thrower, which remains consistent to help him more accurate on all his throws. In the following clips, you’ll see Mariota’s quick release, from short throw to deep throws.

On this play, tight end Delanie Walker is covered well, but Mariota puts the throw right in Walker’s chest with good velocity, giving Walker a chance to make a play. Tom Brady is the best in the league at this—driving the ball to his receivers with pinpoint accuracy (video via NFL Game Pass):

Mariota also has a very good deep ball that he throws with accuracy. Here, he powers the deep ball over the safety for a touchdown against the Jaguars in a game he went 18/22 for 270 yards and two touchdowns (video via NFL Game Pass):

Here, Mariota gets rushed up the middle, but steps up in the pocket and throws a deep strike to Kendall Wright. The throw was not right on point, but Wright made a play for his quarterback and it was a touchdown. His ability to stay calm and step up in the pocket as a young quarterback is uncommon (video via NFL Game Pass):

Mariota is also extremely athletic. On this play from his rookie season, Mariota was getting pressured but kept his eyes down the field. When he couldn’t find anyone open and saw an opportunity to run, Mariota was off to the races (video via NFL Game Pass):

Not many quarterbacks can do that and be the type of passer Mariota is. While the run above was Mariota making a play, he can also handle designed quarterback runs and zone reads without issue. Mariota was efficient running the ball last season, rushing 60 times for 349 yards and two touchdowns.

While Mariota possesses great athleticism, his intelligence might be even more impressive. As a freshman at Oregon, Mariota stepped right in and was going through his progressions like a veteran NFL quarterback. Chip Kelly said Mariota “thinks like a Peyton Manning.”

On this play, Mariota subtly looks off the safety then throws a laser to Delanie Walker for a touchdown (video via NFL Game Pass):

From this angle, you can see perfect accuracy from Mariota (video via NFL Network/NFL Films):

Coming out of Oregon, Mariota did things that were, to me, reminiscent of Aaron Rodgers. He can stand there in the pocket and go through his reads, and, like Rodgers, he can roll out and throw pinpoint passes on the run. Through two seasons, Mariota continues to progress and is living up to the lofty expectations I had for him.

With a mind like Peyton Manning and all the ability in the world, along with a positive mindset and great head on his shoulders, the future is bright for Marcus Mariota.