Home / frontnfl / Melvin Gordon Is Going To Be An Elite Player 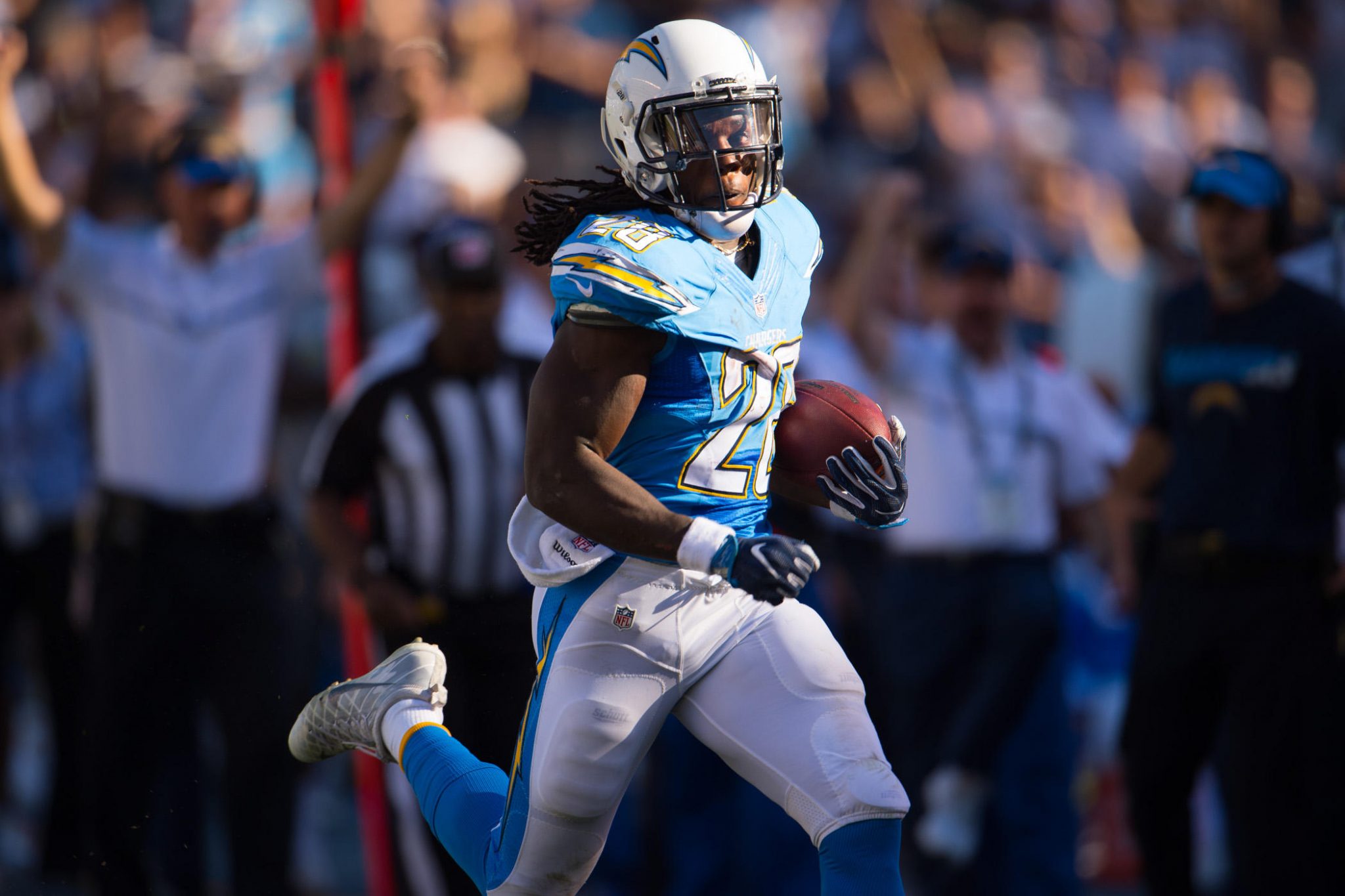 Melvin Gordon Is Going To Be An Elite Player


During the 2015 NFL Draft, the Chargers traded up from No. 17 to No. 15 overall to select Wisconsin running back Melvin Gordon. They had just lost Ryan Mathews earlier that offseason in free agency, so they identified Gordon as someone to go get and make their guy in the backfield.

The decision was widely applauded. After all, the Wisconsin great was the 2014 Doak Walker Award winner as college football’s top running back, running for a mind-blowing 2,587 yards and 29 touchdowns in his final season with the Badgers. Keep in mind, Gordon played for Wisconsin. They have a history of great running backs and almost always have solid offensive lines, but it was in the Big Ten—one of the best conferences in college football—that Gordon put up these numbers.

Gordon always performed for the Badgers, but he became a workhorse during his entire final season in school, having about as prolific a season anyone not named Barry Sanders has ever had. But Gordon’s season belonging in the same sentence as the legendary Sanders says something. In Gordon’s 2,587-yard season, he had six 200-yard games, including a single-game rushing record 408 yards (which unfortunately for Gordon was broken one week later by Samaje Perine) versus rival Nebraska in the snow.

One of those 200-yard games came in a bowl win versus Auburn, and he also ran for 140 yards and a touchdown on 16 carries against LSU in the opening game of the year—two SEC opponents.

To me, Gordon at Wisconsin looked a lot like Jamaal Charles. Maybe it was the number 25 in red, but they have a similar running style and some scouts agreed. He doesn’t quite have the same speed and receiving ability as Charles, but Gordon is bigger and more powerful. I thought the Chargers got a steal with Gordon at No. 15 in the draft.

However, Gordon struggled during his rookie season (which was cut short by a knee injury in Week 15), only topping 60 yards twice and not scoring any touchdowns. While Gordon himself said he was “terrible” (and I definitely wouldn’t go that far, but it was good he knew he had something to prove), people unfairly called him a bust after one season.

In 2016, however, Melvin Gordon looked like the record-breaking player he was at Wisconsin. Despite the Chargers struggling at offensive line for much of the season, the former Badger rushed for 997 yards and ten touchdowns in 12+ games (he was knocked out of the Week 14 game against the Panthers, finishing just three yards short of 1,000), while catching 41 passes for 419 yards and two touchdowns.

He showed he was a true workhorse, and frankly, a beast, once again. While the team battled injuries that derailed their season, Gordon remained a steady and reliable performer for the team.

When the Chargers got around the end zone last season, their guy was ready to punch it in. Admittedly, I had Gordon on my fantasy team last season, so I would know—whenever the Chargers were at the goal line, he would get a crack at scoring for San Diego. Most of the time, he was able to score, showing he was one of the best short-yardage and goal line backs in the NFL just a season after not finding the end zone as a rookie.

The Chargers would routinely line up in power and goal line formations to let Gordon ram his way into the end zone. Here Gordon makes one cut and easily spins/sheds a tackle on his way in for six:

Gordon performed very well against the tough Broncos defense last season, rushing for over 94 yards in both games. In the Week 6 Thursday night matchup against Denver, Gordon broke a season-long 48-yard run.

After getting great blocking and a wide-open hole, Gordon shows off his speed and gallops past the Broncos defense before using his quickness to put a move on sure-tackling safety T.J. Ward to pick up a few more yards.

Gordon also excelled as a receiver last season, as his 10.2 yards per reception shows. He was most effective on screen passes from Philip Rivers, as a big, athletic 6’1”, 215 back can’t be fun to try and tackle in the open field.

Here, Gordon perfectly sells the fake handoff and acts like he’s just blocking, before releasing and walking in for an 18-yard touchdown (he might have scored from 50+):

Against the Titans, Gordon again sets up like he’s blocking then slips out for a screen pass, exploding for a 35-yard gain. As you can see, he just glides in the open field:

In the Chargers’ win against the Falcons, Gordon had one of his best games, scoring twice on the ground and once through the air. He displays his ability as a drive-finisher for the team, as well as his pass-catching on non-screen passes. Overall, Gordon just showed he has a knack for the end zone.

And in one of Gordon’s most impressive plays of the season, he shows his power, speed, and balance when he brushes off the defenders trying to bring him down. This was also a clutch play, as the Chargers were trying to seal the game, up eight points with under three minutes to play.

While he only averaged 3.9 yards per carry last season, Melvin Gordon showed everything you want in a running back and showed he can be a workhorse. The Chargers made improvements to their offensive line in the offseason, along with skill position players like Keenan Allen getting healthy and others like seventh overall pick Mike Williams being added, so we should see an improved team around Gordon. Look for him to continue to ascend as an elite running back in 2017.

And don’t be surprised if he starts putting up some video game-type numbers like he did as Wisconsin.