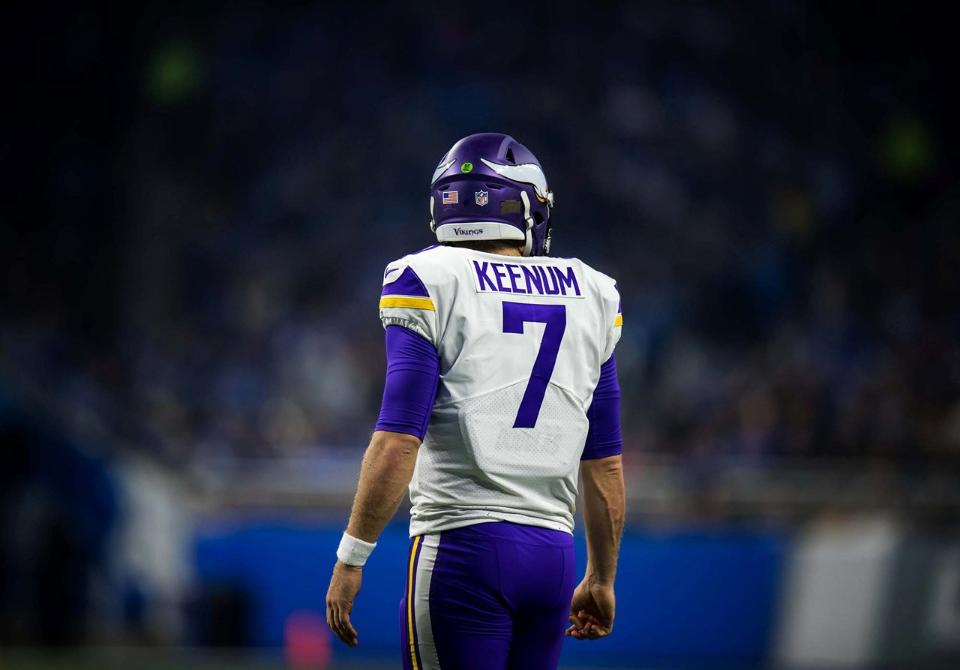 Keenum was in Detroit for Thanksgiving, so he didn’t get a chance to carve a turkey with his family; he made up for it by mercilessly carving up the Lions’ defense to the tune of 282 yards, two touchdowns, 9.4 yards per attempt, and a pristine 121.8 passer rating as Minnesota notched their ninth win of the season, all but locking up an NFC North title in the process. The Vikings haven’t been on national TV a whole lot this year, so fans tuning in around the country may have been a little surprised to see the guy who was so incompetent in Los Angeles last year that he got benched for then-rookie Jared Goff suddenly lighting things up like the next coming of Tom Brady. But it’s not exactly a new development—since knee issues forced Sam Bradford to the sideline early in the year, Keenum has stepped into the Vikings’ void at quarterback and been nothing short of a revelation. What initially seemed to be a fluky hot streak powered by a strong supporting cast is looking less and less like a mirage as the season goes on—somehow, the undersized passer who went undrafted in 2012 and failed to hold onto a starting job with either the Texans or Rams has transformed into something strongly resembling a franchise cornerstone in his sixth season. Here’s a fun statistical comparison:

(all ‘+’ stats are adjusted on a curve against the average passer that year, with 100 being league average)

Quarterback A is Keenum in 2017; Quarterback B is Tom Brady in 2005, his 6th season. You thought I was being hyperbolic when I compared him to Brady earlier, didn’t you? It turns out the numbers actually back that comparison up. Nobody was interested in drafting Keenum when he came out of college, and nobody expected him to ever make an impact in the NFL until an injury to an established starter thrust him into the lineup unexpectedly. That…also sounds a lot like Brady, actually. Um, has anyone ever seen them in the same room at the same time?

It’s fair to say that even the Vikings didn’t see this coming, considering they inked Keenum on just a one-year, $2 million deal to back up Bradford—for reference, the Bears signed Mike Glennon to a 3-year, $45 million deal with $18.5 million in guarantees, and he has already been benched for Mitchell Trubisky. Other quarterbacks who pulled in significantly more money than Keenum this offseason include Jay Cutler, Josh McCown and Brian Hoyer, none of whom have come close to matching his on-field production this season. Prior to 2017, nobody had any clue that this version of Keenum even existed.

So how did this happen? How did a guy that the whole league had written off suddenly become the driving force behind a legitimate Super Bowl contender? The comparison with Glennon is actually particularly telling. We all have an image in our head of what a successful starting quarterback should look like: A big, handsome guy with broad shoulders and a rocket arm, who carries himself with the swagger of a former prom king; a guy who racked up big numbers in a powerhouse college program. Keenum checks precisely none of those boxes—he’s an undersized (6’1”) passer with subpar arm strength who spent his college days in relative anonymity playing for the Houston Cougars of Conference USA. Glennon, by comparison, is 6’7” and can heave the ball down the field—he looks like a prototype of a quarterback that was built in a lab. If you’re a team with a hole at quarterback looking to take a flyer on an unproven free agent, you’re going to go with the guy who looks the part. Keenum doesn’t look like a starting quarterback, so everybody shrugged their shoulders and assumed he never would be. And if Sam Bradford’s knee hadn’t betrayed him, it’s quite possible that everyone would have been right.

Keenum’s ascendance has been a blessing for the Vikings, whose playoff hopes looked bleak when Bradford went down. Now they are 9-2 and sitting pretty in the NFC playoff race—the New York Times’ playoff machine currently gives them a 96% chance of winning their division and a 21% chance of finishing with the top seed. But it has put the Vikings in a quandary at the game’s most important position. At the beginning of last season, the Vikings already had (or thought they had) a long-term solution at quarterback in the form of Teddy Bridgewater. When Bridgewater blew out his knee on a non-contact injury in training camp, Minnesota made a panic-trade to acquire Sam Bradford in an attempt to keep their playoff hopes alive. Bradford played the best football of his career in Minnesota; now, he is injured as well, and Keenum is playing even better. Bradford isn’t likely to come back this season—the Vikings placed him on injured reserve a few weeks ago and his return would be in middle of a playoff run—but word out of Minnesota is that Bridgewater is finally ready to play again. Suddenly, the Vikings are faced with a daunting decision—should they stick with the quarterback who has gotten them this far, or turn the ball over to the guy who they once (and possibly still do) believed to be their future at the position?

It’s not hard to come up with a decent argument for inserting Bridgewater into the starting spot—Minnesota invested a first-round pick in him back in 2014 and, unlike Keenum, he has a track record of success that predates the 2017 season. When I started working on this article, I fully expected to come out in favor of Bridgewater. But honestly, looking at the statistics, I can’t come up with a compelling reason for why Keenum should go to the bench. He may not have an impressive resume before this year (and it’s fair to say that Bridgewater has a higher ceiling), but right now Keenum is putting up better numbers than Bridgewater ever has in his career. On top of that, Bridgewater hasn’t seen NFL action in almost two years—it may take him some time to get re-acclimated to the speed and intensity of meaningful football.

I can only think of one similar situation in recent years when a team that looked like a legitimate Super Bowl threat faced a quarterback controversy in the middle of the season, and that’s the 2012 49ers, who replaced Alex Smith with Colin Kaepernick after Smith had led them to the NFC Championship the previous season. And while Kaepernick lifted the 49ers to another level offensively, I don’t think that situation really compares—Kaepernick boasted a very different skill set than Smith, and his presence introduced a dimension to the San Francisco offense that wasn’t there with Smith (i.e. the pistol read-option rushing attack that flummoxed the Packers’ defense to a quivering mess in the divisional playoffs). Keenum and Bridgewater, by contrast, offer essentially the same skill set—they are both undersized pocket passers who compensate for poor arm strength with pinpoint accuracy. Putting Bridgewater back in the lineup wouldn’t unlock any significant schematic possibilities that Keenum doesn’t offer.

Some might say that Keenum just isn’t the kind of quarterback who can lead a team to a Super Bowl, but that’s a simplistic and reductive argument that should have died the day Trent Dilfer lifted a trophy for the Baltimore Ravens back in 2000. If Dilfer can win a title (and Eli Manning in 2007 when he led the league in interceptions, and Peyton Manning in 2015 when he led the league in interceptions despite missing seven games), there’s no reason why Keenum shouldn’t be able to do the same. You don’t need a superstar throwing passes to win a title—you just need a good team who puts it all together for a playoff run. The Vikings are playing great football as a team right now, and Keenum hasn’t done anything to suggest he might be a liability come playoff time. He’s earned the starting job and a reasonably long leash—it would be a disservice to him to let the threat of getting benched hang over his head while he’s playing the best football of his career for a contending squad. If it ain’t broke, then don’t fix it. In the best care scenario, the Vikings could lock up a playoff spot before the end of the season and then rest Keenum in Week 17, giving Bridgewater a chance to shake off the rust in a meaningless game in case his services became necessary in the postseason.

The more intriguing question looms in the coming offseason, when Bridgewater, Keenum and Bradford will all hit free agency. All three of them have, at various times, delivered starting-caliber production for Minnesota; all three of them come with serious doubts attached. In the case of Bradford and Bridgewater, that has to do with how the after-effects of serious injuries will affect their play; with Keenum, it revolves around whether his shocking 2017 season represents a random hot streak or the new status quo. All three of them could command serious money in a quarterback-starved market—again, Mike Glennon took home $18.5 million in guaranteed money last spring. Here is where you see the biggest downside to sticking with Keenum for the rest of 2017: Minnesota won’t get the chance to evaluate Bridgewater over an extended period before they have to decide whether to pay him. Of the three, Bridgewater is the one who Minnesota has invested the most in—you don’t use a first round pick on a young quarterback unless you expect him to develop into a franchise cornerstone. He certainly could still become the quarterback they envisioned when they drafted him…or he could become the next Robert Griffin III, a promising talent whose growth was permanently stunted by injuries. It’s impossible to say at this point, and any money that Minnesota invests in him going forward will come with a high degree of risk.

Honestly, the best choice for Minnesota is probably to sign the guy who comes cheapest. In the past two years, we’ve seen them plug-and-play first Bradford and then Keenum and have surprising success with both—that speaks to the quality of both supporting cast and coaching (particularly quarterbacks coach Kevin Stefanski, the longest tenured coach on the Vikings’ staff, and offensive coordinator and play-caller Pat Shurmur). Minnesota has spent years building one of the league’s best defenses, their offensive line has coalesced into a top-tier unit around new arrivals Riley Reiff, Mike Remmers, and Pat Elflein, and they have a core of explosive skill position players that they acquired on the cheap and developed into stars—Jerick McKinnon was a third rounder, Stefon Diggs was a fifth rounder, and Adam Thielen was undrafted. There are few teams in the league who are better positioned infrastructure-wise to contend for championships no matter who is under center; with that being the case, there is no reason for Minnesota to feel pressured into overpaying for a quarterback based on what he might become. The Vikings don’t know what to expect from any of these quarterbacks down the road, but they have the luxury of knowing that they can remain competitive regardless of the answer.