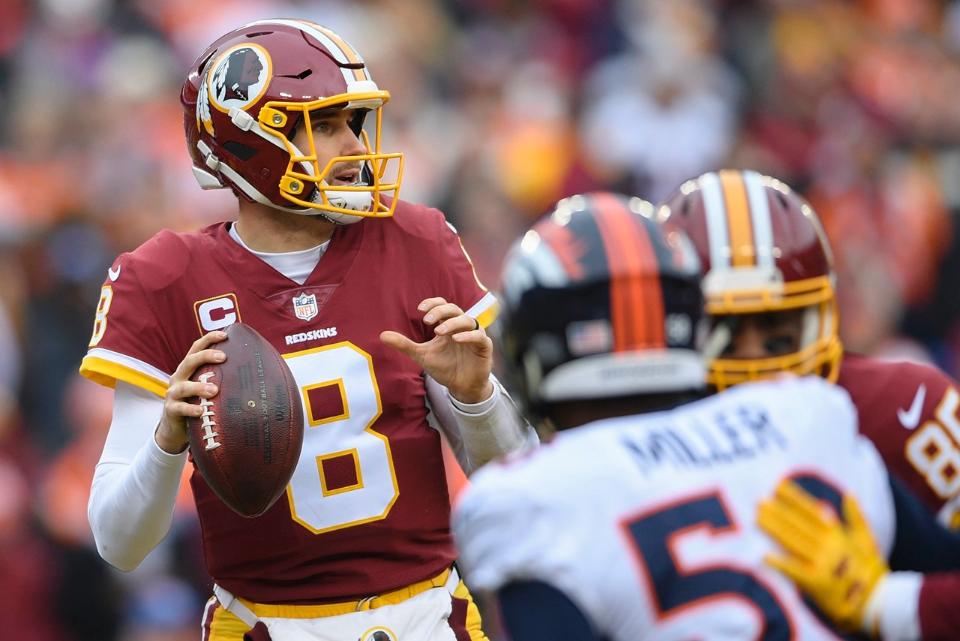 
After last night’s surprising blockbuster sending Alex Smith from Kansas City to Washington, Kirk Cousins is set to hit free agency this March. While I like Cousins, in my opinion the Redskins made a good move to acquire Smith, who has helped turn around two franchises in the last decade and has the second-most wins in the NFL since 2011 (behind only Tom Brady). But Cousins will certainly have his share of suitors when free agency hits, and these are the teams I believe are most likely to go after the 29-year-old quarterback.

John Elway’s Super Bowl as an executive came with Peyton Manning under center, and even if Manning wasn’t a big-time contributor in the playoff run and Super Bowl 50 victory, signing him in March of 2012 helped catapult the Broncos among the AFC elite. Not to say Kirk Cousins is Peyton Manning, because he’s not (and not many are), but he’s arguably going to be the best quarterback to hit free agency since Manning, and the Broncos are likely to be interested.

It seems like a perfect match, but there are other factors to consider: 1) Elway might believe they can get a quarterback that’s ready to play early in the draft, 2) the Broncos might like other free agent quarterbacks such as Sam Bradford, Teddy Bridgewater, or Case Keenum more than Cousins given the price, and 3) Elway simply might not be as high on Cousins as some other people.

Cousins has said money isn’t the most important thing—winning is—but the Browns by far have the most cap space of the potential teams interested in him, and Cousins might be optimistic about the prospects of helping turn around the Browns. Remember, Cleveland has the first and fourth picks in this year’s draft, and they already have a talented roster that should have won more than one game over the last two seasons. If the Browns are interested in Cousins, the quarterback’s thoughts on head coach Hue Jackson and the prospects of working with him will likely be the determining factor of him reciprocating the interest or not.

The Jets are the other team that is looking for a quarterback and is most noticeably flush with cap space. Cousins will be 30 to start next season, and not that he doesn’t have plenty of years left, the Jets are building this thing slowly and might not want to take a chance at stunting the growth of their team by committing a bunch of money to a veteran quarterback. One big-time positive for the Jets if they are indeed interested in Cousins is that the free-agent-to-be is high on the team’s new offensive coordinator, Jeremy Bates.

Of all the teams on this list, the Cardinals probably have the biggest mystery at quarterback after the retirement of Carson Palmer. Cousins would instantly fill the void, and he should be a good fit in new offensive coordinator Mike McCoy’s offense. In terms of attractiveness for Cousins, it would help if Larry Fitzgerald is going to return for a 15th NFL season, but the Cardinals have very strong pieces on defense with a defensive coach, and they have David Johnson in the backfield to take a ton of pressure off the quarterback as both a runner and receiver. This might be the best spot for Cousins.

The Bills apparently want a classic pro-style quarterback, which is why they drafted Nathan Peterman in last year’s draft. With Cousins set to become available, they could get a guy similar to what they probably hope Peterman might be able to become. However, Buffalo has the ammunition to move up and acquire a quarterback in this year’s draft if they feel strongly about one, and they ultimately might not be comfortable giving a huge contract to someone from outside their organization.

The Vikings are a huge wild card for Kirk Cousins’ services, but it’s certainly a realistic possibility. All of Sam Bradford, Teddy Bridgewater, and Case Keenum are set to become free agents, and the team might decide Cousins is the most consistent, durable option to pair with their elite defense—and they also have plenty of cap space to get it done, despite the team being stacked with talent. Personally, I think they would prefer Bradford over Cousins, but Bradford has unfortunately had trouble staying healthy throughout his career while Cousins didn’t miss a game as the starter for the Redskins.