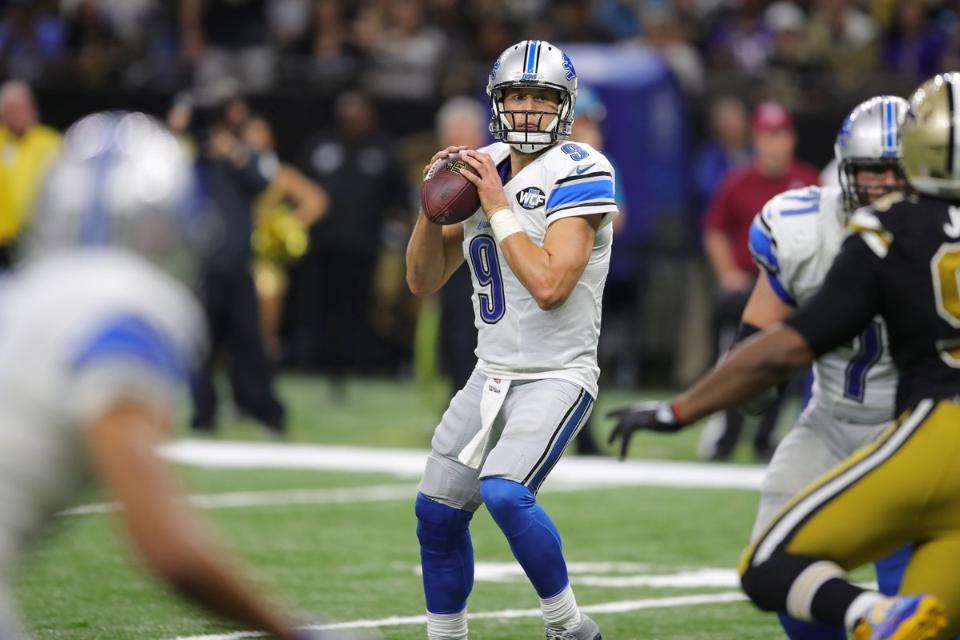 With QB Matthew Stafford at the helm, the Detroit Lions have two more wins heading into Week 15 than they did all of last season. Stafford’s play is a major reason why the Lions top the NFC North with a 9-4 record and a five-game win streak.

Last season through 13 games, Stafford averaged one interception per game. His worst performance of the 2015 season ended in a 42-17 loss to the Arizona Cardinals in which Stafford threw for 188 yards, one touchdown, and three interceptions.

This season alone, Stafford has not had a game with more than two interceptions, in sharp contrast to last season. Through 13 games, Stafford has thrown 23 touchdown passes and six interceptions. This year, he hasn’t thrown a pick in nine of 13 games, compared to the when he threw picks in 41 percent of the first 12 games.

Stafford’s ability to close games is the number one reason he is among the NFC North’s most improved. In a 20-17 victory over the Chicago Bears, Stafford’s rushing touchdown lifted the Lions in yet another fourth quarter comeback. That late win is his eighth comeback in the fourth quarter, according to NFL research. It is the most in a single season since 1950. He now tops Peyton Manning’s 2009 record of seven comebacks for the Indianapolis Colts.

Former Clemson linebacker Vic Beasley has proven himself a dependable force in the Atlanta Falcons defense this season and made a big jump this year.

Beasley did his job last season, but did not stand out in any category. During the 2015 season, Beasley had one interception, three defended passes, two forced fumbles, and four sacks.

This season, Beasley is producing monster numbers including 13.5 sacks, which places him in a tie for first with Denver Broncos weapon Von Miller.

Even when he doesn’t sack the quarterback, Beasley is able to pressure the quarterback. He has defended one pass and forced six fumbles. Beasley leads the NFL in forced fumbles ahead of Oakland Raider Khalil Mack and other disruptive players like Miami Dolphins defensive end Cameron Wake.

Beasley’s best games this season have been on the road. Week 5 at Mile High against the Denver Broncos, Beasley had seven tackles and 3.5 sacks.

In Week 14 at the Los Angeles Rams, Beasley had three sacks and three tackles. Beasley also recovered a fumble and returned it 21 yards for his first NFL touchdown.

The Los Angeles Rams don’t have much to celebrate this season; the Atlanta Falcons scored more touchdowns in the Coliseum than the Rams have all season and they fired their head coach Jeff Fischer on December. 12.

Despite the losing streak, one bright spot remains in the progress of fourth year linebacker Alec Ogletree.

During the 2015 season as a weak-side linebacker, Ogletree only made 27 solo tackles, 15 assisted tackles, and had two sacks.

Now in the role as middle linebacker and defensive play caller, Ogletree has flourished. Ogletree is currently tied with Cleveland Brown Christian Kirksey for fourth most tackles in the NFL. Ogletree’s 117 tackles are over a 400 percent increase in productivity.

Not only has Ogletree improved in tackles, but also in being a threat to the quarterback. Ogletree has racked up eight defended passes, forced one fumble, and recovered another.

Last season Ogletree did not contribute in any of those statistical categories. Ogletree is set to easily beat his career best 118 tackles from his rookie season when the Rams face off against the Seattle Seahawks in Week 15.

Last season as a wide receiver out of Duke University, Jamison Crowder had an average rookie campaign with 604 yards and two touchdowns for the Washington Redskins. Now, Crowder burst onto the scene as a full-time wide receiver for the Redskins.

According to Sports Illustrated, no NFL player that stands at 5’8” or shorter has racked up as many receiving yards as Crowder has in two season. Through 29 games Crowder amassed 1,408 yards.

Quarterback Kirk Cousins has targeted Crowder consistently throughout the 2016 season. With a consistent number of targets, Crowder proved himself much more productive than in 2015. Crowder is averaging 61.8 yards per game in contrast to 37.8 in 2015. His yards per reception also increased from 10.2 to 13.4 yards.

As wide receiver three in the Redskins offense, Crowder has not gone unnoticed despite big name wide receivers DeSean Jackson and Pierre Garçon playing with him. Crowder’s performance even led one reporter for CBS Sports Network Mid-Atlantic to make a case for him as MVP after only nine games.