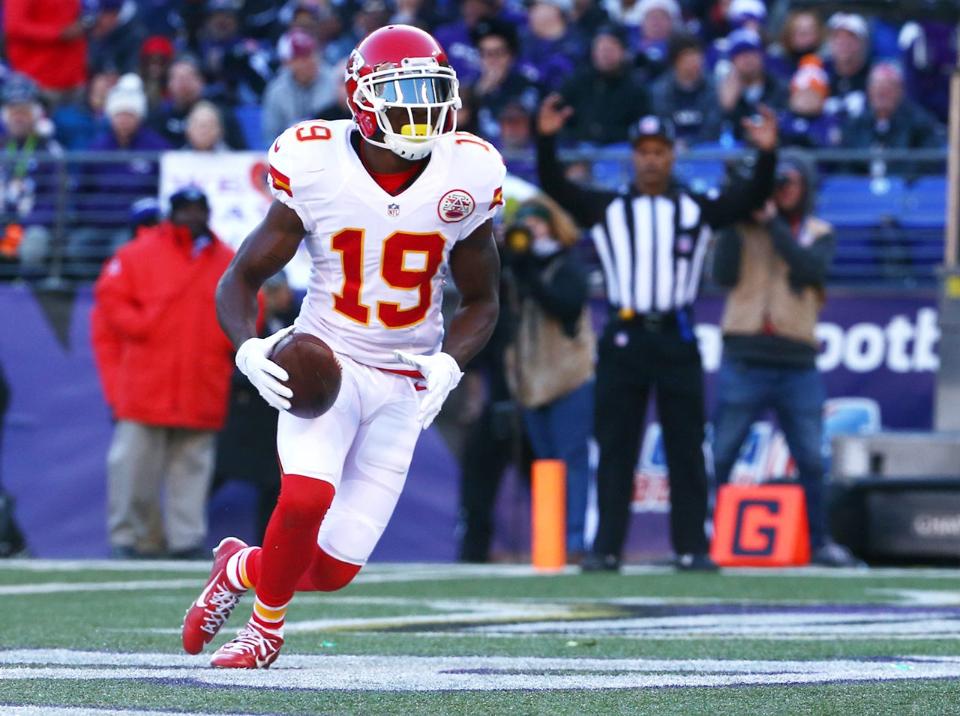 Right when he entered the league in 2009 after being a first-round pick by the Eagles, Maclin has consistently produced on the field. Until his injury-plagued 2016, Maclin had at least 55 receptions and 750 yards in each of his first six season (leaving out 2013, which he missed with a torn ACL).

Maclin is a receiver that does it all—he can take the top off the defense, gain yards after the catch, go over the middle, make clutch catches, rarely drops passes, he’s tough, and he’s one of the most willing blockers at receiver in the entire NFL. The former Eagle and Chief is currently 52nd all-time in receiving yards per game, ahead of players like Hall of Famer Cris Carter.

At just 29-years-old (his birthday was last month), Maclin currently sits at 474 catches, 6,395 yards, and 46 touchdown receptions. Maclin can certainly surpass 1,000 receptions and 10,000 yards by the time his career is over. Also, while during his 2009 rookie season Maclin played with potential future Hall of Famer Donovan McNabb, Maclin hasn’t had the benefit of playing with a Peyton Manning- or Drew Brees-type that throws the ball all over the yard. But he’s been about as reliable as any receiver in the league.

Maclin’s 2015 season is evidence of just how consistent and reliable he is. He had only one drop from 120 targets, best in the NFL. It was his first season in Kansas City, and he had 87 receptions for 1,088 yards and eight touchdowns. Keep in mind, the Chiefs hadn’t had a touchdown from a receiver since the 2013 season. That’s not a typo. The Chiefs went an entire season without a touchdown from a wide receiver. The offense didn’t change a ton or anything, so Maclin putting up those numbers shows how good of a player he is.

So what makes Jeremy Maclin such a dependable player? He’s a balanced player that can do it all for an offense.

In 2015 with the Eagles, Maclin was utilized both inside and outside, and was a key target on all of short, deep, and intermediate routes.

Maclin routinely started offensive drives with quick hits to pick up several yards. He also ran that route to pick up first downs, like on this 3rd-and-7 where he picked up the first.

Here, Maclin takes a screen pass for 21 yards. He shows his explosiveness while accelerating and perfectly following his blocks. If Brent Celek held his block just a little longer on the outside, Maclin probably would have taken it all the way to the house.

Screen passes aren’t the only ways to get Maclin going with the ball in his hands. One example is here on a slant against the Bengals. Maclin easily gets separation on a slant, catches it in stride, and runs right by the safety for a 44-yard gain.

Maclin is also one of the top deep threats in the NFL. He can get deep on almost anyone, as shown here when he beats Stephon Gilmore—who is a great corner—for a touchdown.

While Maclin is up there with Larry Fitzgerald for best hands in the NFL and doesn’t drop passes, he also makes some spectacular catches.

That was a clutch play toward the end of the game, and making those type of important difference-making plays is something Maclin does more than most receivers in the league. Larry Fitzgerald is probably on a tier of his own, but other than that, Maclin is up there with Julio Jones, Antonio Brown, and Jordy Nelson in terms of making clutch plays.

In 2014, during his first four games back from ACL surgery, Maclin had a game-winning touchdown, a game-tying touchdown in a game they won by three, a go-ahead fourth quarter touchdown (which ended up being the difference in the three-point game), and the insane one-handed catch above at the end of the game (that game ended up being a loss). It’s difficult to find another four-game stretch with as many end-of-game plays like that from a receiver.

As stated, Maclin is a tough player—definitely one of the toughest receivers out there. Two seasons ago, in the Divisional Round matchup against the Patriots, he played with a high ankle sprain and helped the Chiefs hang around with New England. He didn’t have a huge game numbers wise (two catches for 23 yards on three targets), but his presence gave the Patriots something more to think about, when not many people thought he’d be able to pay in the game (high ankle sprains are not easy to play through).

Maclin also blocks better than almost all receivers because of the extraordinary effort he shows. I can’t think of any receivers throwing blocks down the field as often as I see Maclin do it. He even got Broncos safety T.J. Ward so mad that Ward punched him after this block.

That block was kind of mild for Maclin, who’s laid some big hits on defenders throughout his career. His effort is the kind of thing that helps winning teams. In addition to his great effort, Maclin should be commended for never causing any issues off the field and for never complaining about not getting the ball or anything like that.

In conclusion, Jeremy Maclin is a tough, balanced receiver that can do it all for an offense. He brings a lot of leadership qualities, simply by playing hard and being a team player. Maclin doesn’t get upwards of 150 targets like some other top receivers in the league, but I have no doubt he’d be able to put up similar numbers to those considered the elite receivers in the NFL if he did. Maclin is a true number one receiver, and while he doesn’t get enough credit, he’s one of the best in the NFL.