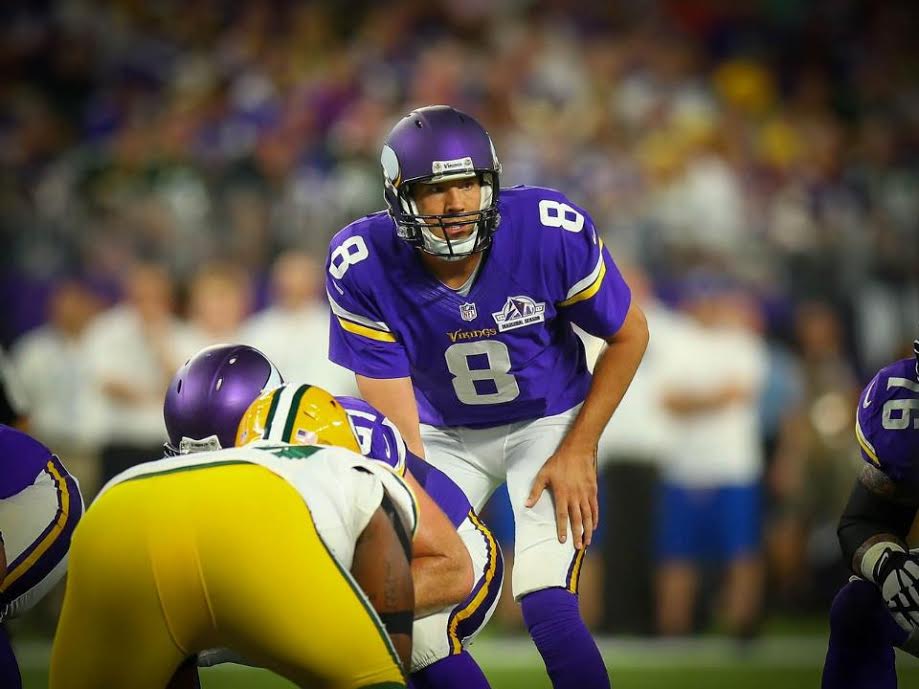 
We are just over halfway there, as yesterday marked the mid-point from Super Bowl LI to the beginning of the 2017 regular season on Thursday, September 7. With just over 100 days until the Patriots hang their fifth banner and open the season against the Chiefs, now is a good time to go begin an all-underrated series. Starting with quarterback, I’ll be doing write-ups on some of the most underrated players (by the media, mainly) in the NFL. At the end, we’ll have an “all-underrated” team.

As with any position, there are a lot of players that get underrated, because of media bias, radio talk shows, or otherwise. Chiefs quarterback Alex Smith is someone that stands out as being very underrated. All Smith does is win games (he’s 60-26-1 in his last 87 games), but people question his ability to win. But Sam Bradford is my choice for the most underrated quarterback in the league.

Bradford was traded from the Philadelphia Eagles to the Minnesota Vikings just ten days before the start of the regular season. Bradford, who missed Week 1 while still getting acclimated to his new team and offense, went on to have an excellent season. He threw for 3,877 yards, 20 touchdowns (compared to just five interceptions), and set an NFL record for completion percentage (71.6%) in a season.

The degree of difficulty involved with arriving on a new team, learning the playbook, and having a great season cannot be understated. It would be hard for anyone at any position to make the type of transition to a new team and perform the way Bradford did last season. But Bradford did it as a quarterback—the hardest position in sports. For someone that is labeled by many as a mediocre quarterback, Sam Bradford was far from mediocre in his first season with Minnesota.

Vikings offensive coordinator Pat Shurmur was with Bradford during his rookie season in 2010 with the Rams, as well as 2015 with the Eagles, so that led to some familiarity with some of the offense. Bradford still had to get familiar with his new receivers and offensive unit, however. And he had to step on the field and lead the team, which he did.

In his first game with the Vikings in Week 2 against the Packers, Bradford stepped into a primetime Sunday Night Football setting, as the Vikings were opening their new U.S. Bank Stadium. Bradford calmly made great throws throughout the night.

His first touchdown as a Viking came on a perfect throw on a corner route by tight end Kyle Rudolph.

There was tight coverage on the play, but Bradford put perfect touch and location on the ball, making sure it was where only Rudolph could catch it. Bradford was pressured and didn’t even follow through all the way on the throw, but it was still perfect.

The second touchdown for Bradford came on a strike to Stefon Diggs. Bradford was crushed on the play and again couldn’t follow through on his throw because of the pressure, but it could not have been thrown any better.

That is an insane throw. Bradford took ten hits throughout the game (including taking a helmet to his left hand, which caused it to swell), but he kept getting up and delivering for his new team. Vikings guard Alex Boone put it well at the time, when talking to USA TODAY Sports.

“That dude is one tough (expletive)… There was a couple times he got hit—I thought he was dead. He wasn’t moving, so I had to pick him up. I’m like, ‘Sam, don’t be dead.’ Next play: (Expletive) bullet. You’re going, ‘Jesus, this guy’s a beast!’”

Throughout the season, Bradford played extremely well, especially when you consider his offensive line battled injuries and was among the worst in recent memory. The team’s best player, running back Adrian Peterson, missed most of the year with a meniscus tear which he suffered in that Week 2 win against the Packers. And the Vikings as a team averaged 3.2 yards per carry, which is historically bad (only the 2013 Ravens and 2007 Bears were worse over the past ten seasons).

There are many throws throughout the season that show how good Sam Bradford is. He took countless hits and had to deal with constant pressure, but he kept getting back up and performing. The Vikings started 5-0, but the wheels fell off in large part because of the offensive line struggles. But just turn on the film and you’ll see Sam Bradford throwing darts all over the field.

The throw is reminiscent of Brady to Gronkowski. Now, Bradford isn’t Brady and Rudolph isn’t Gronk, but not many quarterbacks can rip perfect throws right in the receiver’s chest like that. Bradford does it on a routine basis, like an top-notch quarterback.

In Week 5 against the Texans, when things were still going well for the team, Bradford shredded the number one defense, in terms of yardage. No one can argue Bradford simply checked the ball down to set the NFL record for completion percentage in a season, because he roasted the Texans multiple times on deep balls.

On this touchdown, Bradford uses a subtle shoulder fake to hold the safety then deliver a nice deep ball to Adam Thielen.

Later in the game, Bradford hits Thielen on another deep ball, putting it in the perfect spot so it’s over top of the corner and the safety can’t get to it.

Bradford saw the safety rotating to the middle of the field at the snap, and he used his quick release to help beat the safety.

Bradford’s touch, anticipation, and accuracy on all parts of the field is among the best in the NFL. There is no question he has great arm talent, and he’s been showcasing his ability on the field.

Future Hall of Fame left tackle Jason Peters, who was Bradford’s teammate in 2015, compared Bradford’s ability to Aaron Rodgers at the time.

It’s effortless. I mean, it shoots out of his hand like a cannon. The guy has an arm, man. We’ve just got to keep him clean and good things are going to happen this year…

And Eagles tight end Zach Ertz said Bradford’s arm is stronger than anyone he’s ever played with. Ertz was teammates with Andrew Luck and Michael Vick throughout his career at Stanford and with the Eagles, so that’s saying something.

When Bradford is given a pocket and kept clean, he can put the ball wherever he wants.

Last season being his second after his ACL tear that caused him to miss the entire season also contributed to his superb season with the Vikings. Bradford was also playing well in 2015 for the Eagles, especially considering he was coming off the ACL tear and on a new team; if he hadn’t gotten injured, the Eagles might have made the playoffs with Bradford. And in 2013, Bradford was off to a great start with the Rams, throwing 14 touchdowns compared to just four touchdowns until he tore his ACL in Week 7.

Throughout his career, Sam Bradford has been criticized by many people, partly because he has missed a lot of time due to injury. It’s as if they believe it’s his fault he suffered ACL tears in two straight seasons. Bradford would love to be on the field, and despite the adversity, he battled last season. He kept taking big hits, but Bradford kept getting up and had an awesome year.

Hopefully Bradford’s luck has turned around for good, and he can continue to stay healthy. If he does, there’s little doubt he’ll continue to perform and go from “underrated” to “elite.”

Just watch him play, and you’ll see how good Sam Bradford is.