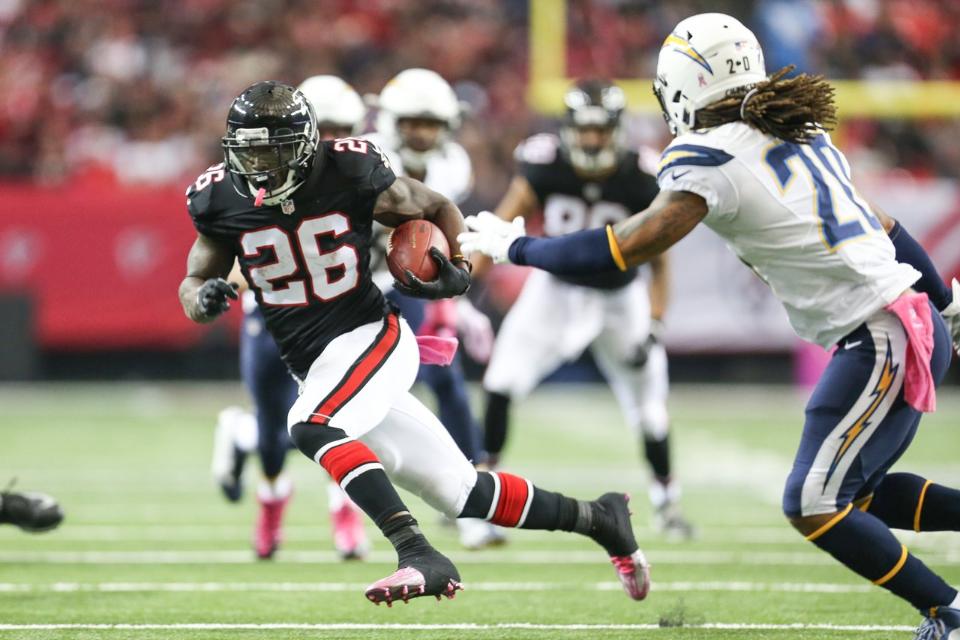 
The Atlanta Falcons obviously have a great offense. They have last year’s league MVP, perhaps the best receiver in the NFL, a solid offensive line, very good complementary receivers to Julio Jones, and one of the best running back duos in the NFL. Everyone knows about Devonta Freeman—anyone that’s picked him in fantasy football over the past two seasons has certainly been happy with his performance.

Tevin Coleman scored 11 touchdowns last season for the Falcons’ high-powered offense. The third-year back from Indiana has been a consistent and forceful player over his first two seasons in the league. Through two seasons, Coleman averaged 4.5 and 4.4 yards per carry, on-par with his backfield partner Devonta Freeman. At 6’1”, 210 pounds with sub-4.40 speed, Coleman is in the mold of an elite running back, but he also puts his gifts to use on the field.

During his final season at Indiana, Coleman played the final seven games with a broken foot and still ran for 1,195 yards (170.7 yards per game) to reach over 2,000 yards for the season. Coleman’s jaw-dropping play with a broken foot included a 307-yard performance against Rutgers and—perhaps most impressive—a 228-yard, three-touchdown performance versus the eventual national champion Ohio State Buckeyes.

Because of his broken foot, Coleman dropped to the 73rd pick of the 2015 NFL Draft, but the Falcons must be thrilled with the selection. Coleman has developed into an all-around back that can do it all for the Falcons as an explosive playmaker.

The first thing that stands out when watching Coleman play is his acceleration. The athletic ability of Coleman is on display whenever he touches the ball. He puts his foot in the ground and looks like he is shot out of a cannon. This touchdown run against the Rams last season shows the great acceleration Coleman has.

Coleman really does look like he shoots out of a cannon, and he clearly has elite acceleration.

The sub-4.4 speed of Coleman is not all due to acceleration, as he also has excellent top end speed, as he has shown. These two examples showcase the top-level speed Coleman possesses.

On both those plays, the safety is standing there flat-footed and Coleman simply runs right by them. The speed of someone that big and strong probably catches most defenders off guard.

Coleman isn’t just a talented physical specimen, and he shows impressive vision, balance, and toughness. This run shows the vision of Coleman, as he takes the toss up the middle and navigates through the defense to the second level before breaking tackles and getting into the end zone.

Despite Coleman not doing much through the air during his college career at Indiana, he’s turned into one of the best receiving backs in the NFL. He might not be as good of an overall receiver out of the backfield as Le’Veon Bell or David Johnson, but Coleman might actually be the most explosive in the entire NFL. In 2016, he averaged 13.6 yards per reception, which is more than any running back in the last 15 years. Last year’s Week 5 game against the Broncos is all someone needs to watch to realize Coleman’s receiving ability.

Atlanta terrorized the Broncos throughout the air by using their running backs. Coleman had four receptions for a whopping 132 yards and a touchdown.

Here, the linebacker is no match for Coleman as he runs a drag route (and gets help with a rub from his tight end) then is off to the races for a big gain.

Coleman motions out again here, then runs a seam route past the linebacker. He gets by so easily that it’s a dream throw for Matt Ryan, and Coleman zooms in for six by the two safeties closing in.

Again, Coleman motions from the backfield to the slot and is matched up man-to-man with a linebacker. Denver’s linebackers just could not keep up with Coleman, and he runs deep on a go-route from the slot for a 49-yard gain.

Overall, Coleman is one of the most balanced backs in the league. He can do it all and is a real weapon for Matt Ryan and the Falcons. While he might not ever be a 1,200-1,500-yard rusher as long as Devonta Freeman is in the backfield with him, Tevin Coleman is an integral part of Atlanta’s offense is a big reason they’re so difficult to stop. If you ask the Falcons or the opposing defenses they go up against, they’ll probably tell you how much of a dream or nightmare (depending on their perspective) Coleman is.