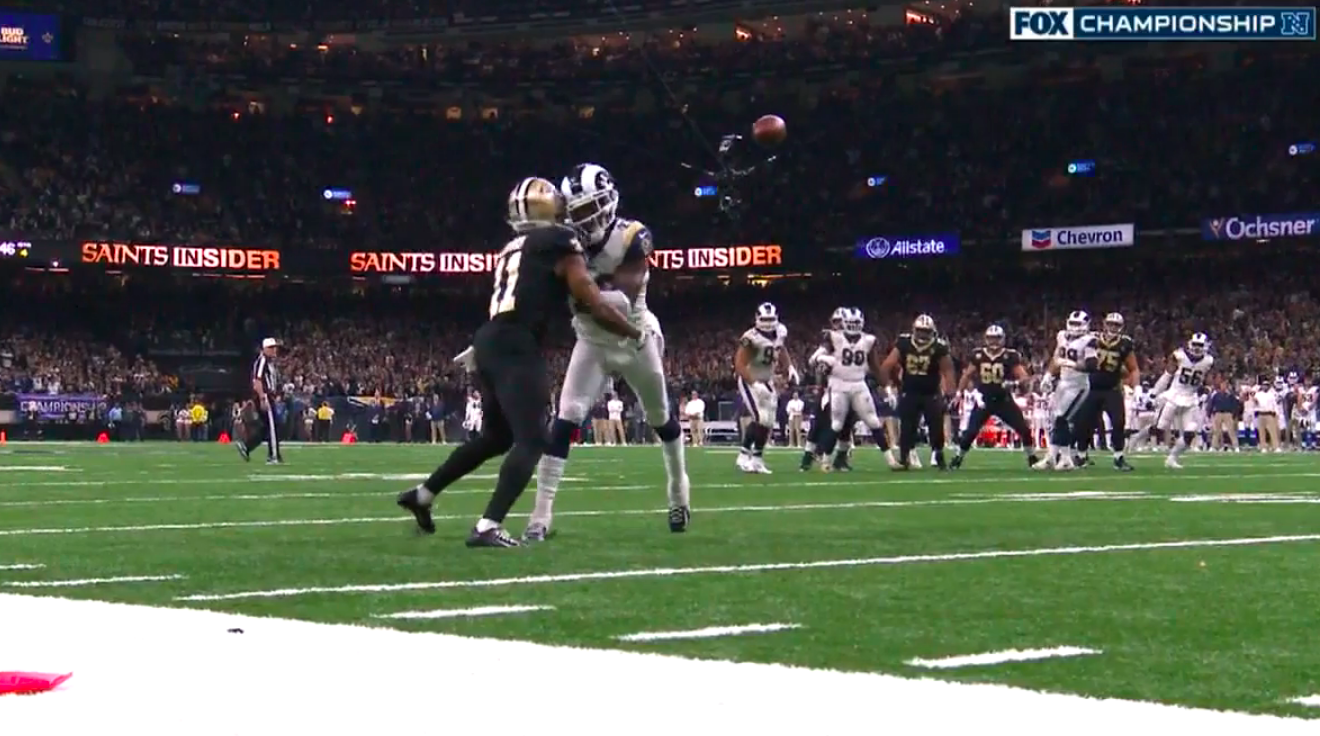 
The NFL had two outstanding games on one of the best Championship Sundays of all-time, but a lot of the talk has unfortunately been about the officiating in both games. If you’ve watched a good amount of football this season, you know the officiating has been as bad as ever, with questionable calls in most games—and not just obvious missed calls either, as more than ever, officials have done relatively simple things (like spotting the ball, which seems to be off by as much as two yards on at least a couple of plays per game) very poorly.

So, while the Rams-Saints game looked to include a clear missed pass interference call that might’ve ended the game in favor of New Orleans, and the Patriots-Chiefs game had a questionable roughing-the-passer penalty against Kansas City, there were plenty of calls, non-calls, and bad decisions by officials throughout the season. It’s just easy to point to one missed call and say that cost a team the game if it comes late in the contest when the intensity is at its highest.

Earlier this season, the Saints were awarded two questionable interference penalties in a close win over the Steelers—both against cornerback Joe Haden. There’s no debate the first one should not have been called, and it came on a fourth down that kept a drive alive for New Orleans. Then later in the game, there looked to be another bad call on a fourth down. Those are two huge plays in a game, and they ultimately might have kept Pittsburgh out of the postseason.

Furthermore, maybe the Saints would’ve lost that game if the right calls were made. If they did lose, there’s a chance Los Angeles would’ve hosted the NFC Championship Game instead of New Orleans, which might’ve made it a whole different ball game yesterday—not that the Rams have a great homefield advantage, but the Superdome was an obvious difference in favor of the Saints during yesterday’s game.

The football gods might just have a way of evening things out, and perhaps that ultimately led to the Patriots and Rams meeting in Atlanta for Super Bowl LIII. Again, this season hasn’t been stellar for NFL officiating, and the league hasn’t helped by making the catch rule more complex and by being selective on enforcement of helmet-to-helmet hits. But if you want things to be more transparent and as close to “fair” as possible, it might be time to make more penalties reviewable.

I’ve long believed certain penalties should be reviewable in NFL games, and some teams have suggested rule changes to make that happen. Pass interference is the most obvious that could potentially be made reviewable, but there’s reason the league is hesitant to make that happen. Judgement calls going to replay review, with the New York Command Center getting involved, might lead to just as much criticism as there is now. The non-call in yesterday’s NFC title game likely would have been corrected, but most cases would lead to one side still being unhappy with the result.

Some are on the total opposite side of things and believe that replay review should be eliminated entirely. Just roll out the ball and let things play out on the field—there are enough missed calls already even with replay. I’m not totally opposed to that, actually, as it would speed up games; and it’s not like replay is perfect.

If you’ve watched Monday Night Football over the years, you probably remember former broadcaster and current Raiders head coach Jon Gruden was very open to the elimination of instant replay. The big issue is that an obvious missed call that can’t be overturned by replay could be a real black eye for the NFL. For example, if the final play of the Super Bowl is a pass to the end zone where the ball clearly hit the ground but was ruled a completed catch, it obviously wouldn’t feel right that a team won a championship on that play.

There’s no perfect solution, but considering we have replay review and so many camera angles to catch things (though not enough, as there should always be cameras perfectly perpendicular to the sideline, especially at the goal line as suggested by Bill Belichick), we might as well expand it to some penalties.