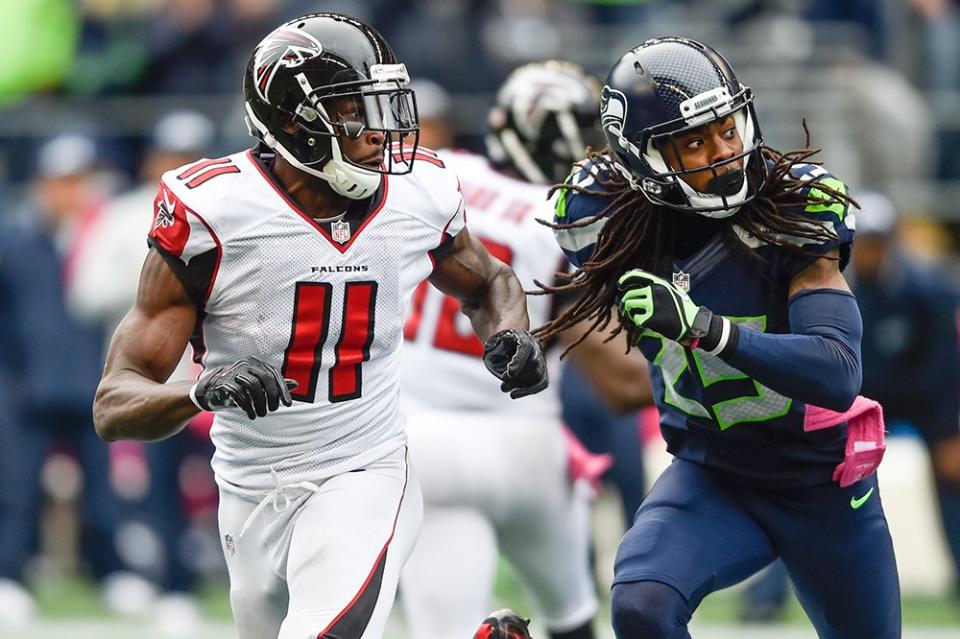 
Some would say the NFL Divisional Round Playoffs the best sports weekend of the year. Let's hope it lives up to expectations–or is at least better than the games were last week. [Update: the Steelers @ Broncos game has been moved to 8:20 PM ET on Sunday night due to weather-related safety concerns]

The Seahawks handled the Lions fairly easily last Saturday night, but that will not be the case against the Falcons. Atlanta lost 26-24 to Seattle back in October, but that was in Seattle. Plus, it would have almost certainly been a Falcons win if Richard Sherman was penalized for a clear pass interference on Julio Jones with the game on the line. The loss didn’t stop Jones from going off though, as he caught seven passes for 139 yards and a touchdown against the Seahawks.

Now, Seattle is without Earl Thomas (leg), and they’ve been getting beaten deep regularly without the All-Pro safety. Thomas intercepted Matt Ryan in their first meeting this season, and the Seahawks sure could have used him on the road. The offense, led by Russell Wilson and Thomas Rawls, will have to keep up with Matty Ice and the Falcons’ #1 scoring offense. Rawls got it going last week versus Detroit, and he has to play just as well to get a W in Atlanta. Coming off a first round bye, I don’t envision a one-and-done for MVP candidate Matt Ryan.

It’s unlikely that anyone envisions a one-and-done for MVP candidate Tom Brady and the Patriots. While the Texans have the defense to upset New England, Brock Osweiler remains a huge liability on the other side of the ball. Osweiler made some really good throws in last week’s win over the Raiders, but the offense will probably look more like they did in Week 3 against New England, when they were shutout. If Houston is going to win, they need to play 100% mistake-free football, and rely on the running game to keep Brady off the field.

The only thing stopping New England running through the AFC every year is an elite pass rush that can get to Brady. The Broncos did it last postseason when they hit the legendary quarterback the most times anyone was hit all season. Jadeveon Clowney has enjoyed a breakout season for the Texans, but no one in the league is better at taking away the opponent’s best player than Bill Belichick. It will be interesting to see what kind of respect is given to another Houston pass rusher in Whitney Mercilus, who has been tremendous in his short postseason career (five sacks in two starts). Still, with a stronger offensive line to neutralize the pass rush, Brady should get his 23rd career postseason win.

Things were not looking great early last week against the Giants, but Aaron Rodgers and the Packers eventually turned it on to dominate New York 38-13. Rodgers had 362 yards and four touchdowns to continue his red-hot play, but Green Bay did lose their top playmaker in Jordy Nelson (ribs). It does not look like Nelson will be able to suit up on Sunday, which makes me less confident in picking against Dallas. Fortunately for the Packers, Ty Montgomery escaped what looked like a major injury last week, and should be good to go this Sunday after returning late against the Giants.

The Cowboys and their fans have been ready to crown Dak, Zeke, and Dez the next big-three in a newfound dynasty, but we have to see how they react to the pressure of the postseason. There is nothing to suggest Prescott will not be up to the challenge, but you never know until the game is played. Would the rookie get benched for Tony Romo if he looks bad and they fall behind early? Romo looked pretty good in his one Week 17 drive, but only a catastrophic start would see Prescott benched. A loss and a sub-par Prescott performance could lead to an interesting offseason in Dallas, though.

Pittsburgh did not disappoint in their first playoff game with Big Ben, Le’Veon Bell, and Antonio Brown on the field together. Ben and Brown connected on the first two possessions for 119 yards and two touchdowns. Then, Bell handled it from there, turning 31 touches into 174 yards and two scores of his own. If the Steelers are going to advance through Kansas City and likely New England, they will need similarly heroic performances from their three stars.

The Chiefs were fortunate to get a first round bye in Week 17, as Andy Reid’s teams are extremely difficult to beat with an extra week of preparation; Reid is 19-2 with the Eagles and Chiefs coming off a bye week. Alex Smith has quietly led an explosive offense with Travis Kelce and Tyreek Hill making plays all over the place, and Jeremy Maclin will probably see less attention because of it. I anticipate a breakout for J-Mac if the Chiefs are going to make a playoff run. Spencer Ware has played well this season, but just imagine if they had Jamaal Charles in the backfield with a trio of Maclin-Hill-Kelce to catch passes.

A potentially big factor to keep an eye on this Sunday afternoon could be the weather, as snow is in the forecast at Arrowhead. Bad weather would impact the Steelers more with their deep passing attack, but the wind isn’t expected to cause problems, so the snow should impact footing more than anything else. Kansas City needs to beware of Antonio Brown double moves with snow on the ground, but I’ll give them the edge at home.