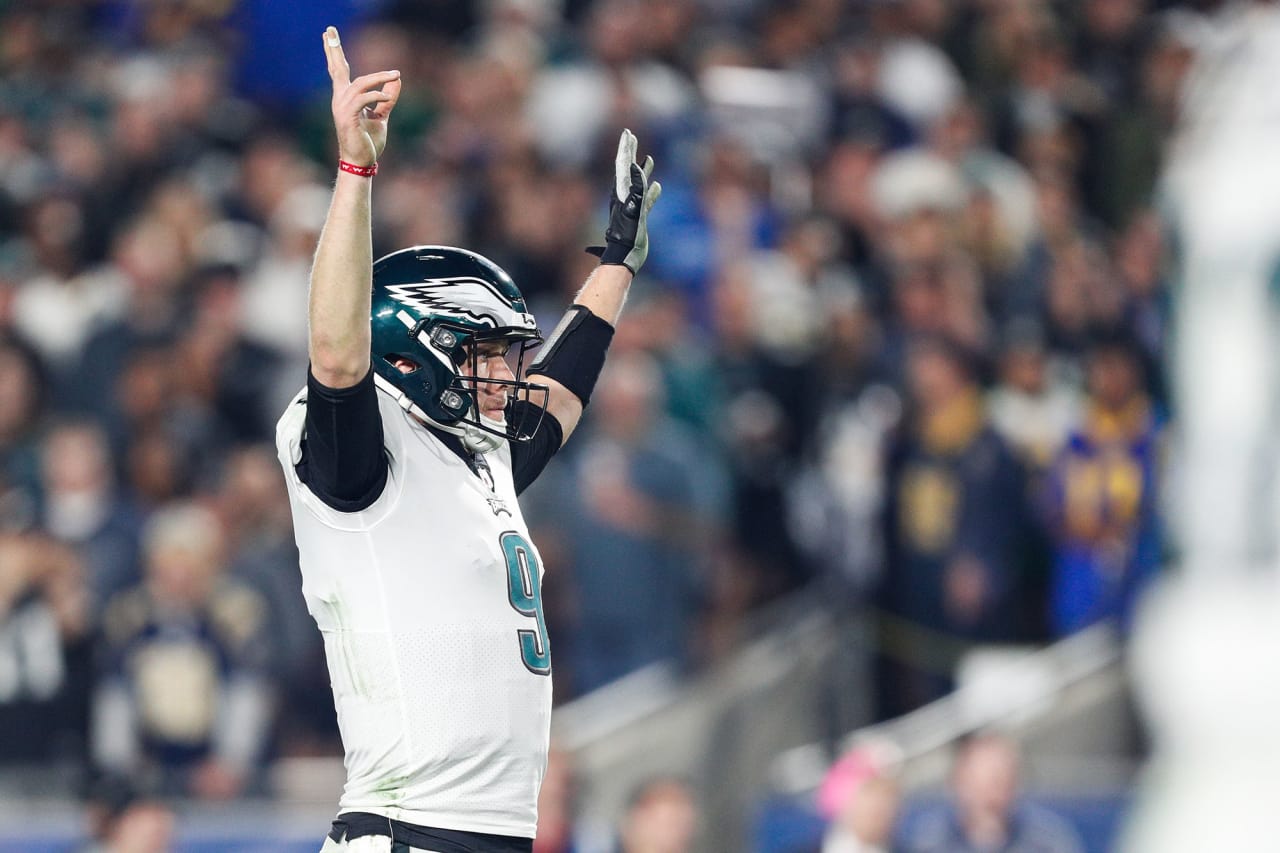 Is this the year Houston makes a playoff run? The Texans are 3-1 in the Wild Card Round (all five postseason appearances have come this decade), but 0-3 in the Divisional Round. They have to feel good about their chances with Deshaun Watson under center, though, as the all-time great college quarterback played his best on the biggest stage at Clemson, including two national title games against Nick Saban’s Alabama defense in which he went 30/47 for 405 yards, four touchdowns, and one interception (a 45-40 loss in 2015), and then 36/56 for 420 yards, three touchdowns, and zero interceptions (a 35-31 victory in 2016). So far, the clutch play has carried over to the NFL with a 4-1 primetime record and a 4-0 record in non-Sunday games (i.e. when everyone is watching), and we should expect Watson to be at his best to kickoff the 2018 NFL Playoffs, especially if the Houston offensive line—which allowed five sacks in last month’s loss to Indianapolis—can give him time to find DeAndre Hopkins.

Defensively, the Texans simply have to get pressure on Andrew Luck, who has been sacked a league-low 18 times this season, compared to 62 sacks allowed by the Texans—most in the NFL and a startling discrepancy when you consider the Colts have the second most pass attempts in the league (644), while Houston has the sixth fewest (506). Running the ball has also been a strength for Indianapolis, and Marlon Mack (908 yards and nine touchdowns in 12 games) will have clearer lanes if center Ryan Kelly (neck) suits up as expected, potentially setting up play-action passes for T.Y. Hilton, which could be lethal against a defense that allowed 199 yards to Luck’s top target last month and didn’t play any better against deep threats Robby Anderson (7/96/1) and Nelson Agholor (5/116/1) in the subsequent weeks. Beating an 11-win team twice at home in less than a month will be tough, but Indy is healthier and playing better football right now.

I said last week that Dallas playing their starters to build momentum outweighs potential injury risk, and their win over the Giants was probably a best-case scenario; not only did they escape mostly injury-free (despite a scare for star rookie linebacker Leighton Vander Esch), but Dak Prescott went off, throwing for 387 yards and four touchdowns, including the game-winning dime to Cole Beasley. The performance is doubly impressive because Ezekiel Elliott (rest) didn’t play, so Dak should be confident for Saturday night’s matchup against the Seahawks. The former fourth-round pick doesn’t get the praise he deserves as a leader and winner for Dallas, but he’s undeniably a top-tier clutch performer at his position, and remember, the Cowboys were an Aaron-Rodgers-to-Jared-Cook connection away from the NFC Championship just two years ago. Prescott threw for 302 yards, three touchdowns, and one interception in that game, and similar to Deshaun Watson, he’s been at his best when it matters most with a 12-4 primetime record, 17-6 record in one possession games, and 19-7 record in November/December.

On the other side of the field, Russell Wilson and the Seahawks are seemingly unbeatable in primetime (22-5-1 record), but it will be interesting to see what kind of impact the changes from a Week 3 matchup (SEA won 24-13) between these teams has on the playoff rematch. Of course, the Cowboys have Amari Cooper this time, while Seattle gains Doug Baldwin but will be without Earl Thomas (leg) and Mychal Kendricks (leg)—two impact defenders that combined for 13 tackles, two interceptions, and a sack in the first meeting. Perhaps just as importantly, the emergence of Vander Esch in the middle of the Cowboys defense is basically like adding a player for them, as the rookie played just 48% of the defensive snaps as a sub-package linebacker in the September loss. I was leaning towards the Seahawks all week, but the game being in Dallas—where Jason Garrett’s squad is 7-1—should give them a better opportunity to establish the run with Ezekiel Elliott and win the field position battle for what should be a down-to-the-wire finish.

Three of the four games in the Wild Card Round are a rematch from the regular season, and the most recent was between these teams, with the Ravens coming out on top, 22-10, in Week 16. However, the Chargers have been road warriors this season (NFL-best 7-1 record away from home), and they will have had a game of experience against Lamar Jackson and the ground-and-pound rushing attack—which no one has seen twice. Also, Melvin Gordon (knee) and Keenan Allen (hip) should both be healthier this time, and the offense has Hunter Henry (knee) set to make an improbable return from a torn ACL suffered in the spring. Baltimore’s defense is obviously one of the best in football, but Philip Rivers has all the weapons to finally make a deep playoff run, and getting out to an early lead would be huge to force Jackson to air it out more than the Ravens would like. That said, the struggles I keep anticipating have yet to surface, and no moment has looked too big for the dynamic 21-year-old (who turns 22 on Monday) to start his career.

An early, cross-country start could be another concern for Los Angeles, but they are actually 4-0 on the east coast this season, including dominant wins over Buffalo (31-20) and Cleveland (38-14) in what were morning kickoffs for the Chargers. As stated, LA saw Jackson already, and in terms of rushing production, they had more success against him than anyone with 39 yards allowed, including just ten yards for the rookie in the second half. Gus Bradley’s defense typically takes away what an opponent does best, so we could see an extreme commitment to stopping the run on Sunday. The Ravens have shown they aren’t afraid to simply hand it off in what are normally passing situations, but forcing Jackson to keep the chains moving as a passer on third-and-long conversions is certainly the hope for the No. 5 seed. I think the experience—even with no playoff appearances since 2013—gives the edge to Los Angeles, who might have the most well-rounded team in the NFL.

The only storyline that could top Nick Foles carrying Philadelphia to a Super Bowl last season would be him doing the same thing for the second year in a row, and it’s looking like a real possibility now that Philly finds themselves in the comfortable underdog role once again. And while Foles has been sensational over the past three weeks, the Eagles probably wouldn’t be in the postseason if not for the struggling secondary quickly stabilizing, and the offense is finally getting Nelson Agholor—ten receptions for 156 yards and three touchdowns over the past two games—involved like they did last year in the playoffs. Not having home-field advantage in January will make a run more difficult than it was last year, but Philadelphia’s biggest advantage is right tackle Lane Johnson and his ability to at least slow down Khalil Mack, who was basically invisible in their 2017 Christmas Night matchup.

On offense, I think the Bears need to commit to Jordan Howard and the running game, which teams have curiously not tried doing much against the Eagles despite a generous 4.7 yards per carry allowed. Also, Tarik Cohen is always a mismatch nightmare out of the backfield, and Philly has routinely struggled to contain dynamic receiving options like “The Human Joystick”. Overall, the success Chicago can have this month will be dependent on Mitchell Trubisky’s play, which is another reason to establish the run to make things easier on a young quarterback that has plenty of weapons at his disposal if he can deliver the ball accurately and on-time. The job Matt Nagy has done in his first year probably isn’t getting talked about enough—and I think the Eagles and Bears could both easily represent the NFC next month—but similar to the Rams last season, Chicago might be a year away as they run into the wrong team at the wrong time.