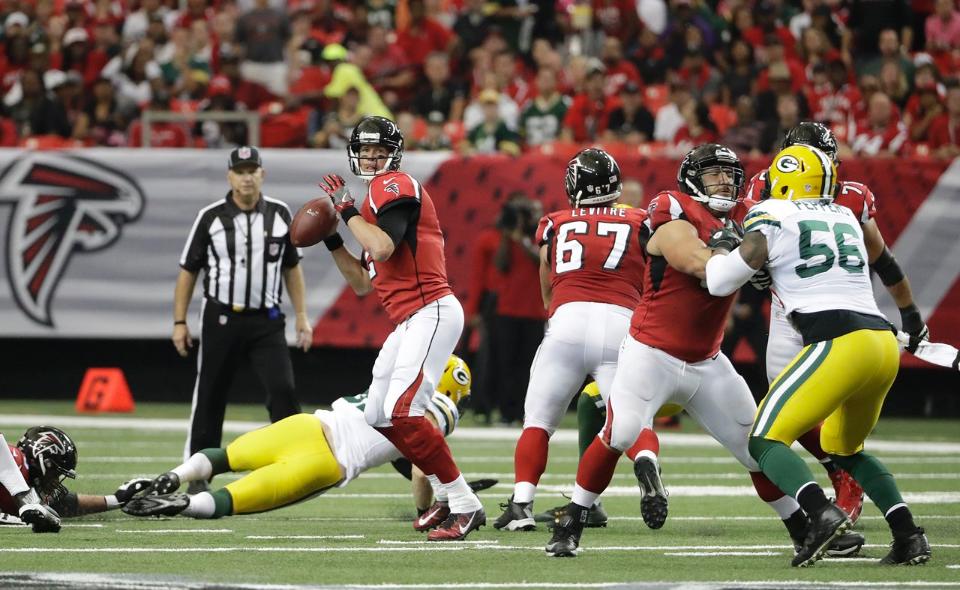 Brady has been unstoppable since returning from his 4-game suspension. He is completing 73.1% of his passes, throwing for 1,319 yards and 12 touchdowns, with zero turnovers. His lowest quarterback rating in his four games was 124.2 against the Steelers. Not only is Brady shredding defenses through the air, but he’s been surprisingly mobile, both as a runner and as a scrambler to hit receivers down field. At age 39, Touchdown Tom might be better than ever—and that’s pretty scary for the rest of the league.

It is going to be difficult to keep up with Brady if he keeps his play up, but Ryan’s play hasn’t been that far behind. Atlanta’s quarterback has thrown for 2,636 yards and is on pace for the third best season total ever. He’s completing 69.2% of his passes for 19 touchdowns and just 4 interceptions, good for a 115.8 quarterback rating. Led by Ryan, the Falcons have knocked off the Broncos in Denver and should have beaten the Seahawks in Seattle if not for a blatant pass interference on Julio Jones that wasn’t called. His most recent game showed why they call him “Matty Ice,” as he drove his team (with a banged up Julio Jones and no Tevin Coleman), for the game-winning touchdown to beat the Packers 33-32.

If there’s anyone that’s not aware of what Derek Carr is doing, they better start paying attention. The young Oakland Raiders are 6-2 thanks to Carr’s late game heroics, including Week 8 in Tampa Bay, when he tied the game in regulation and won it in overtime. The Raiders are 5-0 on the road thanks to the clutch play of their quarterback. His 513 yards and 4 touchdowns against the Bucs added to his season totals of 2,321 yards, 17 touchdowns, and 3 interceptions. Carr has improved in each of his first three seasons, and will be right in the MVP conversation if Oakland reaches the postseason. They still have to play the Chiefs again, and the Broncos twice, including this Sunday night; the primetime matchup between a couple 6-2 teams is big for Carr’s case for Most Valuable Player.

The Cardinals have struggled this season, going 3-4-1 in their first 8 games, but are right in playoff contention. If they want to be playing in January, David Johnson is going to have to continue to be the focal point of the offense with Carson Palmer struggling. Johnson is on pace for 1,410 yards and 16 touchdowns on the ground, plus 70 catches for 816 yards through the air. He honestly probably doesn’t have a shot at the award with the way Brady, Ryan, and Carr are playing, but anything can happen.

Rookie of the Year

This is close between Prescott and his teammate Ezekiel Elliott, but the nod goes to Dak. The 4th round pick out of Mississippi State has led the Cowboys to a 6-1 record with Tony Romo (back) out after getting injured in the preseason. His passing stats (65.2%, 1,773 yards, 9 touchdowns, 2 interceptions) don’t tell the whole story; Prescott has taken care of the ball and made clutch plays to win games—something Romo struggled to do in the past. Also, the stats should inflate a little in the second half of the season, as the rookie didn’t throw a touchdown in his first two games, but has thrown multiple in three of his past four games. Plus, he’s ran for 4 touchdowns and is obviously getting more comfortable with more experience. We’ll see what happens when Tony Romo is healthy and if the team eventually struggles.

While Prescott was a 4th round pick, Elliott was the 4th overall pick. The Ohio State product has mostly been as advertised, punishing defenders and taking advantage of the holes opened-up by his great offensive line. Elliott has rushed for 799 yards (5.0 yards per carry) and 5 touchdowns through 7 games, but hasn’t been as effective catching the ball as he showed in college. He should probably find the end zone more in his final 9 games, and Tony Romo’s possible return to the starting lineup should bump him up to the #1 contender for Rookie of the Year.

Many were ready to crown Wentz as Rookie of the Year and Most Valuable Player after the Eagles’ 3-0 start, but things have been a lot different since then. Wentz has thrown for just 4 touchdowns and 3 interceptions since his 5:0 ratio through his first three starts, and the offense as a whole (and the team) has taken a step back; Philadelphia is 4-3 after starting 3-0. The kid from North Dakota State needs to play like he did earlier this season to snatch the award from his division rivals.

The Bears look like they got a steal with their 5th round pick out of Indiana, as Howard has been great since becoming the starter. He’s actually averaging more yards per carry (5.1), and has caught more passes (18) than Ezekiel Elliott has in the same number of team games. Howard didn’t even play in Week 1, and wasn’t the starter until Week 4, but he still has rushed for 505 yards and scored 3 touchdowns. If he was the starter and getting a workload like Elliott from the very beginning, Howard might be our midseason award winner—as he’d be on pace for over 2,000 total yards. The rookie just went over 200 total yards against the scary Vikings defense on Halloween Night.

Offensive Player of the Year

For the same reasons Brady is our midseason MVP, he’s Offensive Player of the Year. We’ll see how he fares in November and December, but an angry Tom Brady might be the best player of all-time.

Matty Ice leads the league in yards and touchdowns, but the edge still goes to TB12 for playing nearly perfect football so far. If Ryan finishes the season how he started, he could be taking home this award because of the totals being better than Brady. Ryan is on pace for 5,272 yards and 38 touchdowns.

The dark horse for Most Valuable Player, Johnson has picked up where he left off from his rookie campaign. The superstar back has a great chance to go over 2,000 total yards and 20 total touchdowns.

Gronk’s totals won’t be that great because he was inactive for the first two games and limited for the next two games, but he’s still leading tight ends in yards (484), and leads the world in yards per catch, with an insane 22.0 average. Gronk should easily reach 1,000 yards and double-digit touchdowns despite the slow start.

Defensive Player of the Year

Miller’s spot isn’t as secure as expected because of a surprise candidate in Buffalo, but the team success and overall impact gives the edge to the Super Bowl MVP. Miller has 8.5 sacks (second in the league) and gets attention of opposing offensive coordinators line no one else (with J.J. Watt out). We’ll have to see how he’s able to get to the quarterback of the Patriots when the teams play this December.

Long-time special-teamer Lorenzo Alexander came out of no where to lead the league in sacks through Week 8, with 9.0 of them. Not only that, but he’s forced 3 fumbles, which is second in the league to only Bruce Irvin (4). The Bills have needed it, too, with injuries to their defensive front, including 1st round pick Shaq Lawson. Alexander could’ve easily gotten this award, but the Broncos’ 6-2 record makes it hard not to chose Miller.

After leading the league in interceptions as a rookie, the second-year player is on track to do the same thing this year, as he leads the league with 5 picks. He’s also recovered a fumble, and has been less vulnerable to big plays, as he just held T.Y. Hilton in check this past Sunday. Peters could follow up his Rookie of the Year award with Defensive Player of the Year award.

Beasley didn’t want to make any excuses, but he played injured as a rookie last season. He was still effective, but he’s been a dynamic pass-rusher this season. The former Clemson Tigers star is third in the league with 7.5 sacks and has forced 3 fumbles so far this season. His signature performance came in Week 5 against the Broncos, when he outplayed Von Miller; Beasley had 8 tackles, 3.5 sacks, and 2 forced fumbles.

Comeback Player of the Year

Nelson hasn’t put up the big yardage totals we were accustomed to before his injury, but he leads the NFL in touchdown catches (6) after tearing his ACL two preseasons ago. As he continues to work the rust off, Jordy should be even better in the second half of the season, as the Packers will continue to air it out.

It seems like a lot of people forgot because he was also suspended to start the year, but Bell is coming off a serious knee injury. The Steelers star back still remains at the top of the players at his position, averaging almost 150 total yards per game. He has yet to find the end zone through 4 games, but that will definitely change down the stretch.

This is a little different than Nelson and Bell because he’s coming off a bad year rather than an injury, but Murray could still win this award. He saw massive workloads every game in October, with no less than 21 carries in a game, and it resulted in 5 touchdowns for the month. Murray has 756 yards (4.7 yards per carry) and 6 touchdowns so far, plus 197 yards and 2 touchdowns as a pass-catcher. Hopefully he can keep the pace up with his heavy usage.

Like Murray, this is different in that he’s not really coming off an injury. After not scoring as a rookie, Gordon has scored 10 touchdowns so far in 2016, and has looked great as a runner, despite averaging just 3.6 yards per carry. San Diego will continue to rely on Gordon to pickup tough yards and convert short-yardage situations.

Coach of the Year

It’s tough to choose someone else with the Patriots going into their bye week with best record in the NFL despite not having the best quarterback in the league and arguably the best offensive weapon in the league for the first four games of the season. Belichick found a way to go 3-1 without them, though, including a shutout victory over the Texans and a win over the Cardinals to start the season. The Patriots are the Super Bowl favorites yet again.

Del Rio found a way to win games one way or another and has his team leading the AFC West with a 6-2 record, right behind the Patriots in the AFC. Just last week, the Raiders committed the most penalties in NFL history, and still found a way to win the game in overtime. Now, maybe a lot of the blame for penalties should go to the head coach, but a win is a win, and he has his guys believing. Good thing Del Rio is coaching the Raiders, and not ESPN.

The Vikings have struggled over the past two weeks, but still sit at 5-2 and the top of the NFC North. That’s pretty good considering they lost their starting quarterback and future Hall-of-Fame running back before and early in the season respectively. The offensive line is a huge issue for Minnesota, so Zimmer will have to figure that out if the Vikings are going to be serious Super Bowl contenders. Fortunately, the NFC doesn’t really have a powerhouse like New England in the AFC, so they still might be the favorites.

Seriously. The Bears took it to the Minnesota Vikings on Halloween night, and are now 2-6 going into the bye. Even before the victory on Monday, Chicago felt confident that they could run the table and make the playoffs. We saw Andy Reid and the Chiefs win out after starting 1-5 last season thanks to a good defense and running game, and the Bears have a strong front-7 and solid running game this season, which will be key as the weather gets colder. After the bye, they get a great stretch of winnable games before facing the Packers in Chicago Week 15. Don’t sleep on the Bears.